If you’re looking at the prospect of a 13 hour train ride, always be dubious of the ticket that cost a mere 100 RMB. For that price, the journey is guaranteed to be an uncomfortable ordeal. Think about it: a ticket that was purchased for 100 Chinese RMB amounts to 14 USD. If you break down that price over a timetable, you’re looking at roughly $1/hr in traveling fees. Very economic, no doubt about that. But that $14 will only secure you a hard seat in an over-crowded, over-booked trunk carriage. Good luck getting comfortable, or keeping your sanity for that matter. In the end, it’s best to throw down the extra 100 RMB to purchase the sleeper carriage.

After the obligatory visit to the Great Wall, Colm and I set out for the obligatory taste of Beijing roast duck. Our circuitous search for an ideal restaurant didn’t want for results; nearly every corner in Beijing has a roast duck restaurant. However, we were being somewhat particular in our search. We ignored the places that looked incredibly upscale, and we also avoided joints that had a queue out the door. Eventually our time and budget constraints forced us to concede defeat—for that night anyhow—and settle on a small restaurant that didn’t have roast duck on the menu.

At dinner, I couldn’t help but remark to Colm that the Great Wall hike was still surreal in my mind. Eventually the reality would set in, given the hefty amount of photo evidence and the physical toll of the 10K hike. But at that moment in the restaurant, I was more consumed by my hunger and a pressing need to visit sights that remained unseen. It was as if I couldn’t even take a breath and realize, “Hey wow, I just walked for 10 kilometers on a man-made object that’s visible from the moon.” I was more or less frustrated with my inability to live in the present. The only immediate thought that I was able to truly comprehend was the glib realization that our vegetables were slightly overcooked. 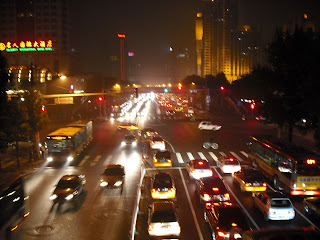 Beijing exists as a city of contrasts. It is simultaneously a clean city and a filthy city. At once it is awe-inspiring and under-whelming; celebrated yet disdained; enthralling but terribly frustrating. These contradictions are bound to exist in any large city. For every Yin there is the inevitable Yang. Of course this fits well with the Chinese principle of symmetry; but beyond that Beijing seems to follow the blueprint for all large cities. From the center point the city expands outward in concentric circles. At every point along that circle, there exists a counterpoint within the city’s walls. Maybe across the invisible radius of that circle, maybe one meter to the east or west.

The city is home to many things, but it is impossible to live there. Beijing is one moment the city of your dreams, but then it is also the place of nightmares.

Rory Keane is an American-born teacher and writer who has logged nearly two years in China, and is working on another year-long stint in the Middle Kingdom. He writes about travel, sociopolitical issues, health, entertainment, and culture, among other topics.
Read More Share
Not to Be Missed: The Fantasea Show in Phuket
“Carp-al” Tunnel Syndrome at Fantasea

One Response to Beijing: A City of Contrasts