On most clear days, the majestic Mt Fuji manifests itself in full glory as you descend towards Narita Airport. It may not claim fitting rivalry with the mighty Himalayas, but at 3776 m, Japan’s highest peak, surrounded by five lakes, is not to be trifled with either. A manifestation of Japanese graciousness, the serenity of Mt Fuji cannot be taken for granted, nor that of the people it stands sentinel over. 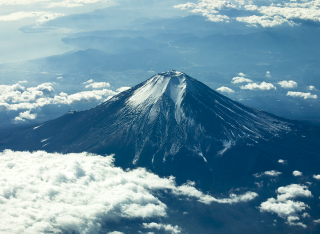 In order to up the adventure quotient a notch, this one visit, I chose to travel solo as opposed to taking a conducted tour. In real terms, it will mean you cannot read road signs, or any other signs, for that matter, as most of them are in Japanese. So, your English won’t take you far. It is not even remotely comprehendible by locals; that is if you can find one who speaks the language to start with.

Translated, it means you can easily be lost. Still, it was no determent, as I resolutely headed in the direction of Mt Fuji’s largest water body. An hour on the bullet train to Shinjuku in central Tokyo, followed by a two-hour bus ride found me at a quaint rail-road station at Lake Kawaguchi.

I checked into the Station Inn there, to discover I was the sole occupant of a bunk-bedded, tatami-matted dormitory. Evidently, all those looking for some buzz take the more popular Fuji Hakone circuit to the lake; the Fujikyu Highland Amusement Park en route being a huge draw for youngsters, locals and tourists alike.

The north shore of Lake Kawaguchi, all 8 km of it, is a walking trail that provides for the most beautiful views of Mt Fuji, reflected in its clear, placid waters. The ideal spot for taking memorable photographs is from Oishi Park on the western tip of the trail where the foreground is a riot of colours: swaying lavender stalks, hydrangeas, cherry blossoms, red maple leaves; depending on the season.

The Japanese believe that one has not climbed Fuji-san till one has made down from it as well. Therefore, an entire day is needed for Mt Fuji as the climb to the summit can take up to seven hours and the descent another three. The best time of the year for this activity is July and August.

For, on a single summer day, the temperatures can vary from 35 °C to freezing point depending on your location. A word of caution: adequate woollens, comfortable footwear and prescribed medicines are a must. The ubiquitous vending machines along the trail may provide hot and cold beverages; ill-health, however, will require an emergency airlift, possibly more expensive than the cost of your entire holiday budget! Do not be fooled by the gentle slope leading up to the crater atop Mt Fuji, as that can be deceptive. Even though many a climber has been lost on the mountain, purists believe that the hike has to be made. Most visitors start the walk up at night and watch the sunrise from a vantage point. The reverse can just as easily be accomplished with a view of the sunset if you are climbing during the day.

Another panoramic view of Mt Fuji can be had from the multi-peaked Mt Mitsutoge a short distance away. You can 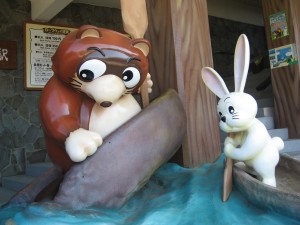 choose to take a ropeway ride or trek up to the top for some breathtaking scenes of Japanese landscape. One of its peaks, Mt Tenjo, has been immortalised through Osamu Dazai’s delightful fable, Kachi Kachi Yama.

An elderly couple found a raccoon eating the seeds they had sowed here. When caught, the raccoon apologised and gave his word to honour their effort. But soon the raccoon soon went back on his word. A rabbit, good friends with the couple, promised to avenge them. One day, as the raccoon carried firewood, the rabbit set it on fire burning the raccoon’s back.

The next day he followed the raccoon to the river and watched him drown along with his boat, which the rabbit had cleverly fashioned out of mud. Legend has it that if you ring the bell of Mt Tenjo while looking across at Mt Fuji and make a wish, your wish shall be granted. 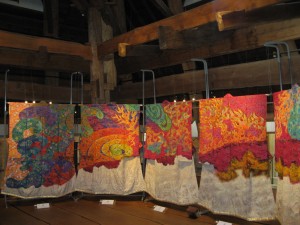 Kubota Itchiku Museum The Kubota Itchiku Museum requires a special mention. Named after the artist who revived the lost art of decorating kimonos, Tsujigahana (tie-and-dye technique embellished with gold and silver foil and embroidery), it houses his kimono creations depicting themes of nature.

His masterpiece ‘Symphony of Light’ is an installation comprising 80 kimonos that form a picture of Fuji-yama when placed together. Having chanced upon a 14th century fragment of the Muromachi period at the Tokyo National Museum in 1937 while in his twenties, Kubota devoted his life to mastering this form, finally completing a piece to his satisfaction 40 years later.

His first exhibition was held in 1977 at the age of 60! The priceless kimonos are not enclosed in customary glass cases as the artist did not want to keep any distance between his creations and the public, lending the experience a personal connect with the artist.

This post is the first one in the Wish List series, by my sister (nepotism be damned!) Niku Sidhu. (Pic credit: Aerial view of Mt Fuji by KS Matharu)

When she is not travelling, she is writing about it. Over the past decade or so, she has created an impressive writing repertoire for herself: as a columnist with Hindustan Times, as a book reviewer for The Tribune and as a contributor to travel magazines in India and overseas. Her work-in-progress, the documenting of colonial heritage along the Old Hindustan-Tibet Road, is an outcome of her long-standing romance with the Himalayas.
Read More Share
The Emperor’s Throne in Taiwan’s Huang Di Dian
Jacky Sall to Lead Senegal