We’re off to Puerto Maldonado to explore the Tambopata Research Center for a week. We’re going as guests of Rainforest Expeditions, which is a Peruvian ecotourism company that strives to help people experience the wild rainforests of Tambopata in a sustainable manner. 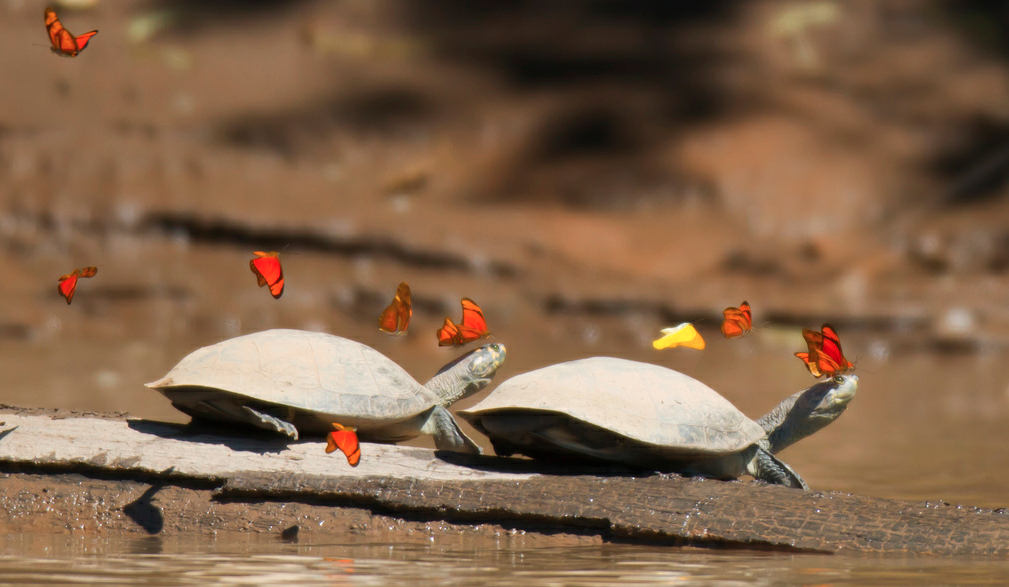 Our guides will be biologists, tourism professionals, or community members. First stop will be Oxbow Lake, where we’ll paddle around the lake on a canoe or a catamaran, looking for lakeside wildlife such as hoatzin, caiman and hornerd screamers, hoping to see the otters which are infrequently seen here.

Then we’ll head out on a walk from Refugio Amazonas, which leads to the 25 meter scaffolding canopy tower. A bannistered staircase running through the middle provides safe access to the platforms above. The tower has been built upon high ground, therefore increasing your horizon of the continuous primary forest extending out towards the Tambopata National Reserve.

The next day is a transfer four and half hours by boat from Refugio Amazonas, in the pristine heart of the reserve, to the Tambopata Research Center. Within the 700,000 hectare uninhabited nucleus of the reserve, sightings of capybara, caiman, geese, macaws and other large species will become frequent.

Scientists will provide an in depth look at the biology of macaws, their feeding habits, the theories for clay lick use, their breeding and feeding ecology, population fluctuations and the threats to their conservation.

On most clear mornings of the year dozens of large macaws and hundreds of parrots congregate on this large river bank in a raucous and colorful spectacle which inspired a National Geographic cover story. Discretely located fifty meters from the cliff, we will observe Green-winged, Scarlet and Blue-and-gold Macaws and several species of smaller parrots descend to ingest clay. Outings are at dawn when the lick is most active.

This five kilometer trail covers the prototypical rain forest with immense trees criss-crossed by creeks and ponds. Amongst the figs, ceibas and shihuahuacos we will look for Squirrel, Brown Capuchin, and Spider Monkeys as well as peccaries.

Pond Platform
Ten minutes upriver from the lodge is a tiny pond with a platform in the middle. It is a great place to spot waterfowl such as Muscovy duck, sunbittern and hoatzin along with the woodpeckers, oropendolas, flycatchers and parakeets that call this pond their home.

An entirely different habitat characterized by smaller, thinner trees atop hills and slopes is covered by this five kilometer trail. Saddleback tamarins are frequently found here.

A thirty minute hike from TRC brings us to the palm swamp. Dead aguaje palms serve as nests to Red-bellied and Blue-and-gold macaws. An elevated boardwalk and scaffolding tower allow for eye level observation of the macaws as they fly in and out of their nests.

We then head to the Refugio Amazonas.

Brazil Nut Trail and Camp
A few minutes hike from the lodge is a beautiful old growth patch of Brazil Nut forest that has been harvested for decades (if not centuries) where the precarious remains of a camp used two months a year by Brazil Nut gatherers can still be experienced.

Today Lainie considers herself a digital nomad who is living a location independent life. She and her son write and podcast their experiences from the road at Raising Miro on the Road of Life.
Read More Share
Remembering the Joplin Missouri Tragedy
Peruvian Amazon Rainforest: The Shipipo-Conibo People & Ayahuasca Brew