To simply read about a location, an event or a cultural practice is indeed interesting, but to be immersed in the experience is to breathe it in and make it a part of yourself. This type of immersive learning has become our life-learning curriculum, guided simply by our combined interests. The world is our classroom, and our interests are our guide.

We are in a golden age of information, where with a click of the mouse, the internet has opened up our world. Unfortunately for many, the exploration stops there. As in this series, we hope our readers use this as a platform for information, but encourage everyone, old and young, to venture out into the world and feel, smell, experience all that you’ve imagined and use this information as your personal inspiration. And, as inspiration guides, Miro and I were inspired to explore one of Paris’ historic wonders, The Arc de Triomphe.

Traveling to Paris, immediately conjures up romantic visions in my mind of the iconic Eiffel Tower, quaint city streets lined with cozy sidewalk cafes and the endless homage to art displayed in galleries and museums scattered throughout the city. But nothing compares in grandeur to the impressive Arc de Triomphe located on the right bank of the Seine. 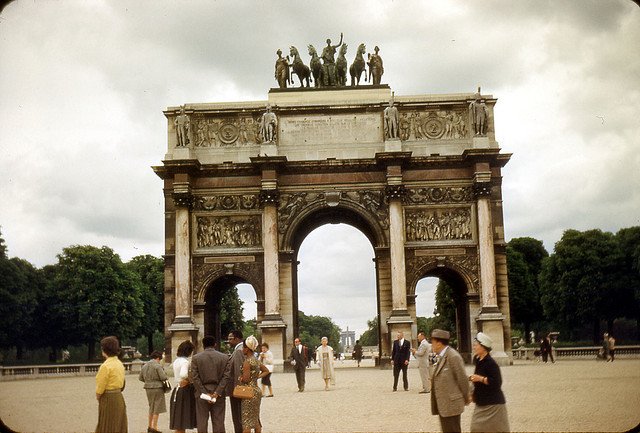 Image courtesy of Paul-W, based on a Creative Commons license.

The Arc de Triomphe is one of the most famous landmarks in Paris. Seeing it in person is the only way to understand its power. In my early twenties, I visited Paris on my year-long-round-the-world trip. Twenty years later, my memories of the Arc de Triomphe remain constant, awe-struck with it’s grandness in contrast to the surrounding intricate delicate details. 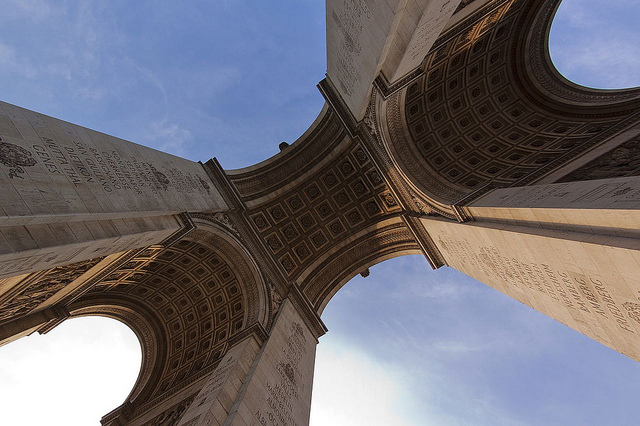 Image courtesy of PLF Photographie, based on a Creative Commons license.

The Arc is in the center of a gigantic roundabout and traffic fed by twelve major streets. Entering the center of the roundabout from the underground walkway, you find yourself at the Place Charles De Gaulle where the Arc stands. Only there, can you will get a sense of the sheer massiveness of the monument. The large crowds were not discouraging to me, as I noticed there was enough space to wander about and be wowed. My secret tip: Look up.
The internal coffer of the Arc de Triomphe offers intricate patterned carvings that cast shadows and play with the light. As my eyes traveled down the side pillars, I found myself reading the inscribed names. There are over 600 generals listed, the underlined names signify the commanders that lost their lives in battle.
As you walk around the Arc, you will find a few familiar faces carved, including an image of a victorious Napoleon and an interesting human representation of Paris with her crown of city walls. 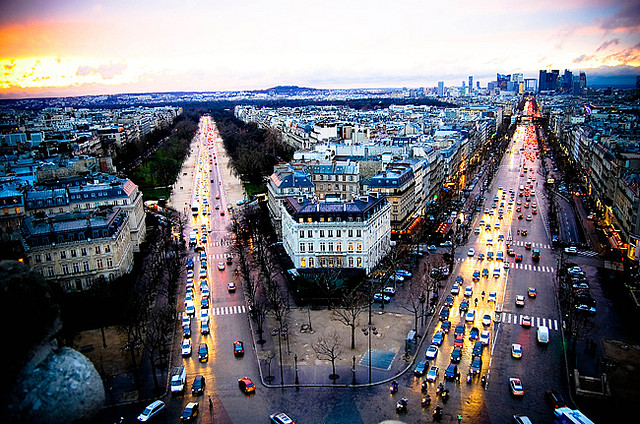 Image courtesy of Pauldc, based on a Creative Commons license.

One of most unforgettable part of my visit including walking up the the 280 stairs to see a birds-eye view of Paris. I felt as if I was in the center of the world with every famous Paris landmark within view. Even the traffic on the circle below became mesmerizing.

Timing is everything. Twenty years ago, by chance, I arrived at the Arc de Triomphe late afternoon, about two hours before the Tomb of the Unknown Soldier was honored. I had not planned it, but after learning this ceremony takes place daily, I waited to witness this for myself. I learned that below the arch lies this tomb was placed. I found myself wondering who he might be, how old he was when he died and what his hopes and dreams must have been. At 6:30pm I witnessed the eternal flame being relit with much fanfare and reverence. I was moved more than I had expected and with tears in my eyes, I knew I made the right decision to stay for this ceremony.

After my visit, I researched the history of the Arc de Triomphe with much passion. Not expecting to be touched as deeply as I had, I was inspired to I read and learn and discovered a checkered history. Although the monument appears to strictly be a celebration of war, I was delighted to learn that it acknowledges the need and value of peace. The Arc de Triomphe was built to honor Napoleon’s victory in 1805 at Austerlitz. Unfortunately, Napoleon never had the chance to see the arch finished. Of the four groups of sculptures, Antoine Etex’s Resistance and Peace along with Peace of 1815 tell the story after the fall of Napoleon. 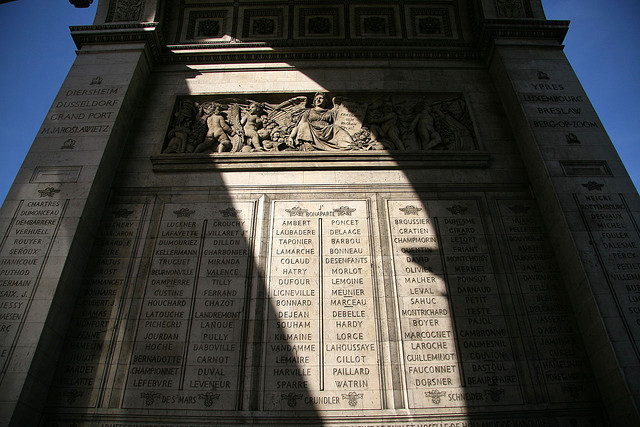 Image courtesy of peirz, based on a Creative Commons license.

Throughout its history, the Arc de Triomphe has become the rallying point of French troops parading after successful military campaigns and for the annual Bastille Day Military Parade. Famous victory marches around or under the arch have included the Germans in 1871, the French in 1919, the Germans in 1940, and the French and Allies in 1944 and 1945.

The Tomb of the Unknown soldier was added after World War I in 1920. It stands as a symbol of the armistice signed between France and Germany. The french inscription reads, “Here lies a French soldier who died for the fatherland 1914 to 1918.” For an unknown person to be buried at the base of such a grand structure is awe-inspiring and humbling.

A visit to the Arc de Triomphe is not just a tourist attraction, rather experienced as a transformative experience, living time and history. One cannot take away a profound learning simply through reading about it or seeing images. Twenty years ago, I experienced the power of presence, the living history and a rich cultural heritage only accessed through a full immersive experience. I felt the reverence for past wars and the value of peace contrasted with the supposed inner conflicts of a French citizen from long ago.

Today Lainie considers herself a digital nomad who is living a location independent life. She and her son write and podcast their experiences from the road at Raising Miro on the Road of Life.
Read More Share
Pepian, Guatemala’s National Yummy Spicy Dish
Beyond the Scenes and Understanding Sufism in India