A magical part of Muhu Island off the coast of Estonia is its rural charm and the people.  Koguva Village, the best preserved 19th century village in Estonia, is located on the Kuivastu, a place where all the buildings are architectural landmarks. The oldest buildings, which date back to the 18th century, are in the middle of the village. A typical farm from that time consisted of a threshing barn/dwelling house, storehouses, a sauna, stables for animals, and a summer kitchen. Very often the farm also had a smithy. There were separate storehouses for grain, meat, fish and clothing and of course the number of storehouses one had depended on the wealth and size of the farm family.

The stone fences found throughout Koguva village are over 200 years old however the beginnings of the village can be traced to 1532. Now a museum, it was originally named after writer Juhan Smuul and was opened for the first time in the early 1970s. How’s this for an odd fact? During the 1930’s, over 150 people lived in the village, and more than 100 were of those 150 were named Schmuul.

Since 1990, the museum has been called Muhu Museum and is an institution of Muhu parish. People come here for its charm yet etnographers marvel in the village’s uniqueness, which they say is a remarkable example of Estonian peasant architecture. 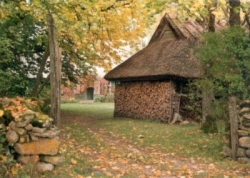 It was usual for unmarried girls in Estonia to sleep in the clothing storehouses during summer months, and so special “sleeping barns” were built for them.  Saunas were also common, with the most common one on Muhu being a ‘manure sauna’, which was also the sheep barn. When the family wanted to have a sauna, the sheep were chased out, straw was spread over the manure, and the sauna stove was fired up. The manure made the ‘manure’ sauna especially warm…a little different than how we experience a sauna in modern times.

I managed to get lost in the village since I ventured off the main narrow gravel road. Suddenly I realized I was walking in circles and not a soul was around…no one to greet me but the wind, a few birds and some hovering trees which promised to protect me from the cold should I end up needing them for the night.

Having been lost before, I realized that tracing my steps wouldn’t work because in this case, I let just one eye do the leading, largely through the lens of my Canon 7D. The place was so charming and so full of history, I felt like a child being read a fairytale for the first time. As it was being read, a princess pulled a 3D version of the story from her book and displayed it on a platter, one large enough for the child to walk into….and there I was.

The only difference was that I wasn’t ten, it wasn’t my first fairytale and the village was real, as was the growing wind which reminded me how foolish I was not to be paying better attention.

Dirt paths wove in the shadow of towering ancient trees between protected buildings and stone fences, most of which were covered in green moss. Farmyards full of apple trees, bright flower beds and flowing leaves whisked about. Further down the road, a coastal meadow scattered with junipers presented me with a view of a windmill, the symbol of Muhu and Saaremaa.

What was most remarkable was how despite the cold, the place had a way of bringing you back a century in time while simultaneously promising a glimpse of what a holiday could be like during warmer summer months. The houses bleached by the Baltic sea wind and the sun and the worn out and weathered wooden boats were a stark reminder that life here at the turn of the century was likely a harsh one . I couldn’t get enough of it. The moss. The barren trees. The farmhouses. The giant boulders which fenced off living areas. The boats. The emptiness. Then, I ran into a woman who was hanging clothes on the line and learned that she was a curator of the property. Her English was impeccable and it was she who led me to a clearing where I found my eager-to-leave and hungry colleagues who were wondering where I had landed. A place stuck in time. A reminder of how life was. A warm and yet rich mustard coats the endless birch trees which lie scattered throughout the property. One massive sculpture for good measure, perhaps to remind us that its no longer the 1800s and this place isn’t just a dream? As if Juhan Smuul was still lingering around the property, to ensure it was well preserved? Wood and signage meets sky and clouds. This post didn’t help me find my colleagues nor did it paint a clue as to where I had already been or where I needed to end up. The wind engulfed me and while it was cold and my hands were losing feeling, the energy of the place kept me warm, like a fairy princess on her way to her long awaited kingdom. I wondered how often these boats were ever used, if ever. New ones were being built inside a large structure that sat near the sea’s edge. The smell of damp wood and sawdust was prominent. I found myself wanting to add a new coat of fresh paint to this sad overturned fishing boat. The place makes you want to dive in and go to work. Tethering. Planting. Sawing. Building. Sanding. Shoveling. Before I left, I ran into a family. The little one had me at “hello” and while they barely spoke English, they welcomed me into their little shop where you could buy honey, handcrafted wooden boards, juniper jam and wool mittens. Around them and their isolated cottage with nothing but a table, bench and fireplace outside, not a soul could be seen, heard or…found. Things to do in Koguva include the Manniku Handicraft Barn Weaving studio, the Koguva Art Gallery and hikes along nature trails. Other things worth taking in on Muhu Island include the Muhu Museum and Pallasmaa beach, the only small sandy beach in Muhu. Additionally, explore:

All Photo Credits: Renee Blodgett, We Blog the World and Magic Sauce Media and for more on Estonia in general, visit our Estonia page.