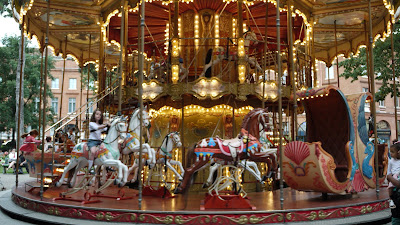 I don’t know what happened. We were on location in Toulouse this afternoon shooting a scene outside a ‘fancy’ hotel (and it was fancy). The neighborhood was very very French. Small streets, people walking and talking and kissing and sitting at cafes. There were shops all around and a little park in the middle with a carousel and a fountain and people sitting on benches. Oh la la…

Anyway, everyone was talking and, because I am the person with the black-and-white board with all the info about the scene on it, I have to know what part of what scene we are shooting. So, I have to be paying close attention at all times all day and it is taxing, especially when everyone is talking. And suddenly we are doing a take and I have no idea where we are because no one informed me, and I didn’t get my nose up into what they were doing (which doesn’t work so well anyway). So, I yelled, “EXCUSE ME… WE ALL NEED TO BE COMMUNICATING WITH ONE ANOTHER!”

Everyone just looked at me and said, ‘Oh, oh we are here we are doing this,’ etc. I did that take and, for some reason, started to cry and I just set the clapper (my apparatus) down and left the set, without telling anyone. I walked around the block and cried. I don’t know why. Other than the fact that we’ve all been working intensely together for the last two weeks and I just needed a moment to cry.

I came back and everyone was being very kind and sweet to me. And then, I still didn’t want to be there, so I handed my clapper to someone else, ran around the corner to a shop I had seen and bought a really pretty and expensive dress, all in about three minutes flat. And if you know me, you know that is not my way of doing things. I am slow at these kind of decisions. I came back to the set, retail therapy happy, and I continued my job.

We had a few more takes and some scenery shots. Then Steven and I went into a fromage (cheese) shop and bought a bunch of French cheese. It’s mmmmm and stinky.

Samia Shalabi is a Seattle based artist & designer, yogi and traveler who has roots in the Middle-East, was raised in the middle-west and is drawn to India. She has a degree in geology, has traveled all over the world with a backpack, and believes in following her dreams. Samia does yoga most mornings, enjoys walks around Seattle, loves to laugh, and daydreams about where to travel next. She is working on a movie shoot in France.
Read More Share
Germany and Austria: Learning to Kill Two Biers with One Stein
Straddling Bus Project in Shenzhen