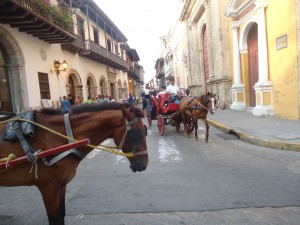 The historical walled city of Cartagena de Indias contained the perfect backdrop to experience a bold tale of allure, lust and adventure, leaving no doubt why the 80′s blockbuster Romancing the Stone featured this special locale.

Miro and I strolled wide-eyed in the old city that seemed to cater to visitors, a place where imagination could create seemingly any possibility.

Miro and were sucked into the energy and spent several days exploring the streets of El Centro.

One day we ventured out of the walled city to the nearby hotel zone, we discovered the contrast of modern streets, lined with large hotels alternating real estate with tall residential condos.

The building residents all seemed to share the tiny strips of sand that met the warm Caribbean ocean. We recognized this place, but had never been here before. This was reminiscent of Cancun Mexico’s tourist zone.

All fine stops on the ‘gringo trail’ of the popular Cartagena, Colombia, but I craved a more authentic experience, and knew it was there, somewhere.

Our CS (couchsurfing) host Rafe recommended we spend the day at the local playa and fishing village just out of town called La Boquilla and offered to share the day with us as our guide and friend. I was thrilled by the offer and excited to see what awaited us.

La Boquilla is located just 7km outside of Cartagena which we reached via a local bus after close to half hour ride. As we approached La Boquilla, the bus turned left onto a small gravel road, cutting through a couple of blocks of a weathered village.

I was surprised when the bus continued down a sandy beach road, parallel to the shore. As we looked from left to right we saw miles of abandoned beachfront palm-thatched restaurants, empty with the exception of a sleeping local or two swinging on a hammock in the shade.

Rafe reminded us that today was the day after a national holiday and if we had attempted to visit this location yesterday, we wouldn’t have even found an inch to sit on the beach, let alone have the opportunity to eat a piece of fresh, locally caught fish. That was something I was looking forward to. 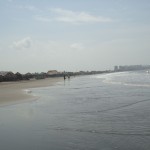 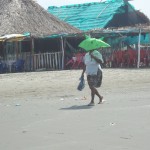 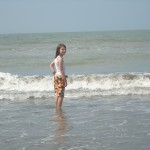 We had decided to walk along the water line and chase the waves back into the Caribbean as they teased the shore. We strolled down the beach for a bit, kicking sand, finding an abundance of shells and polished rocks as gifts offered to us by the water angels welcoming our presence.

We noticed we were the only tourists on the beach and we definitely stood out among the few locals playing in the water. I certainly didn’t mind.

This was the first day in a week, we were NOT among other travelers, tourists, or backpackers. It felt amazing to be there. 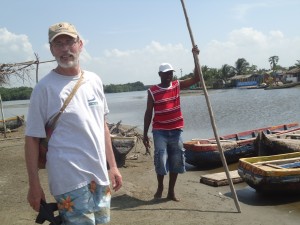 Within fifteen minutes of playing on the sandy shore, we were approached by a half dozen ‘freelance canoe operators’, (or guys with boats) offering us a private tour into the mangroves.

Each offer out did the offer before, not only in price, but in service and promise of adventure. Finally we settled on one offer, the man with the largest smile wearing a red striped shirt. A few minutes later we strolled over to the mouth of the cienga opposite of the Caribbean waters, a place where once the large lagoon drained into the Caribbean Ocean.

But today, the two bodies of water did not meet as the beach created a perfect sand boundary not to be penetrated. 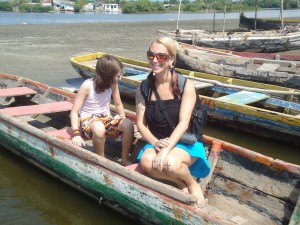 One by one we climbed into the hand carved, hand painted and hand patched canoe, the object that brought this man, our guide, his livelihood.

The afternoon sun was low and hot and we settled on the wooden slats that became our seats. With no shade above, we prepared for our journey with anticipation for whatever the adventure offered.

The water in the cienega was shallow and paddles were not possible. Instead our guide used a large bamboo stick that looked like what I imagined the gondoliers must use in Venice, Italy.

We settled back as we were guided through the mangroves. At some points the we were in large areas of the cienga that looked more like a lake.

Other areas in the cienga looked like tunnels in between the trees which invited us into the shade free from the blazing sun. Either way, the body of water was lined by the beautiful mangrove trees who’s roots made the most exquisite criss-cross patterns.

I was able to snatch a few photos of the roots reflecting on the water which appeared to be a never ending pattern repeating into infinity. There was such beauty and stillness around us. 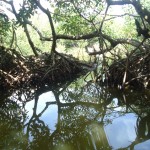 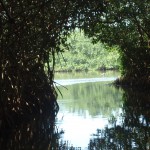 There were times in our mangrove journey we came upon fishermen, standing knee deep in the cienga casting their large nets in hopes of catching a meal. With a flick of the wrist, the net spun from a small folded structure suddenly laying flat across the surface of the water, around 10 feet in diameter.

The nets are called atarrayas and we never got close enough to the fishermen to actually see how they scooped up their catch after the cast. 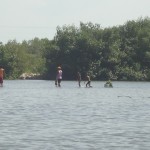 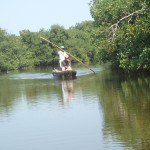 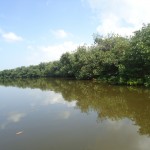 We floated through the mangroves for close to thirty minutes. I noticing the subtle hint of life around me from the beautiful trees and their complex root system to the tiny tadpoles swimming along side our canoe.

Our host Rafe, a scientist and a former UN oceanographer had explained to us that the mangroves contained the richest and most dense ecosystems in the world.

In fact what we saw that looked like murky waters were not actually murky at all. They were rich with sediment and life, which often times created a safe area for incubation for tiny life forms. The Mangroves were not contain salt-water nor was it considered fresh-water, rather a unique combination of the two, thought of as a transition zone between land and sea.

The protective habitat the mangroves create are important in the reproduction of two-thirds of the planet’s fish species and in the formation and retention of soils. And they were absolutely beautiful. 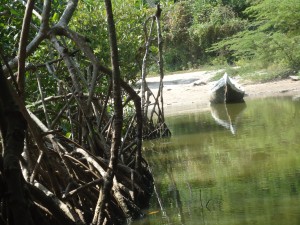 After thirty five minutes or so, we reached the sandy shore of yet another beach. We were greeted by three local children who seemed excited to see us. They offered us woven bracelets for sale, like the multiple ones Miro has covering both of his wrists.

Many smiles later, we were guided down the sandy path along side of a local village. We were facing the Caribbean sea once again and could see the opposite shoreline of Cartagena as our backdrop now, recognizing the large condos built for tourists.

The foreground, however, told a different story. Some of the structures seemed to tempt gravity by simply remaining in an upright position, worn by weather, worn by time and worn by the salt from the sea.

The structures seem to alternate in needs, some requiring a roof, others a wall or two and the idea of putting them together to make one complete structure came to my mind. There were a few that seemed to contain four walls AND a roof, but they seemed few and far in between the ones that did not.

These villages were the beach side ghettos that housed many of the locals that would never be entertained by the tourists who relaxed in their luxurious condos across the bay. 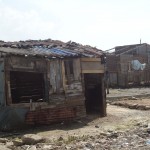 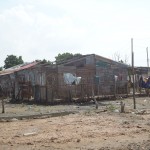 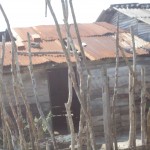 We reached our beachfront destination, and Miro headed directly to the sandy shore to start construction of his own sand dwelling. Within a few moments, boys from the surrounding village joined him and soon there was a crew working jointly together in to construct a grand sand castle (which later turned into a ship). 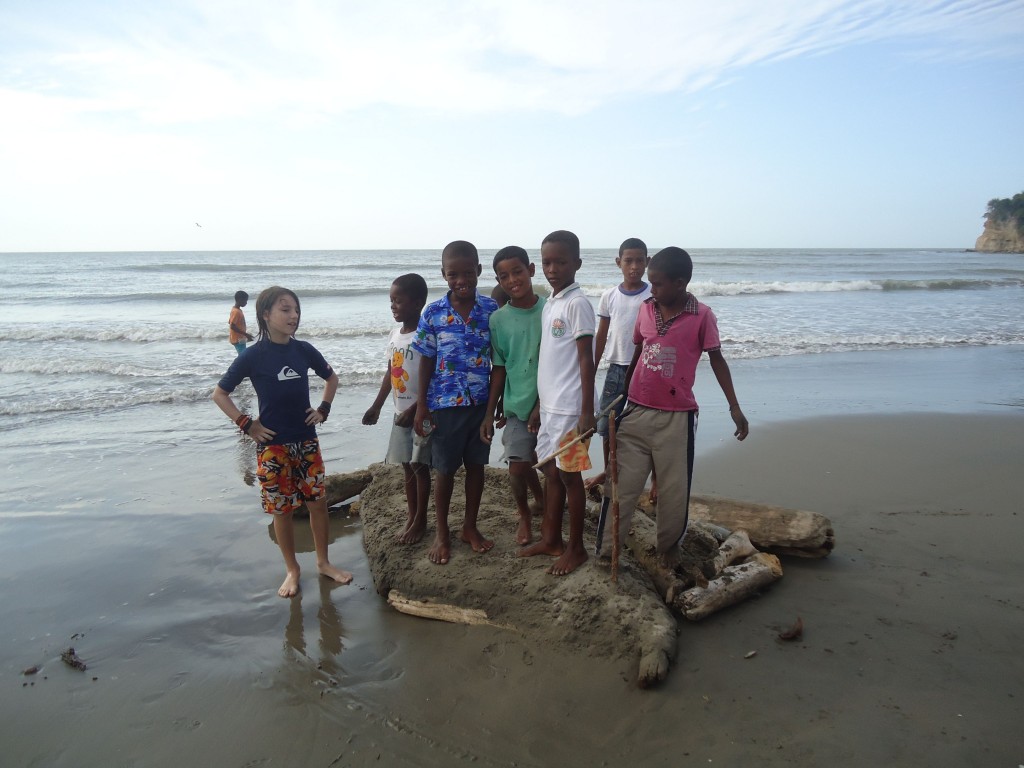 Our canoe captain came back with a tray of freshly caught fish, and we selected the ones we wanted for lunch. I chose the medium sized white fish and Rafe choose the larger red fish. Miro wasn’t hungry. I ordered mine to be brought to me “sin cabaza”. 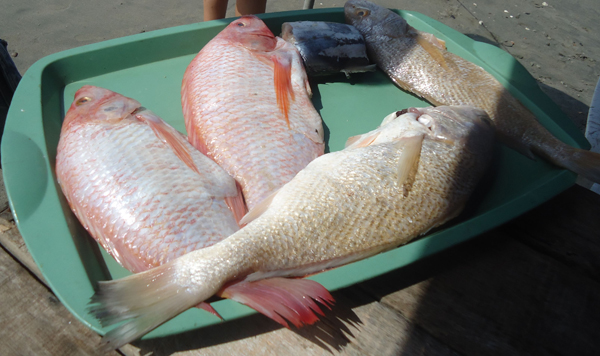 We were severed whole fried fish, rice and patacones, which are traditional to Colombia. They are fried pancakes made from plantanos, and boy are they delicious. In fact, topped off with a cold beer, I have to say our seaside lunch was perfect! 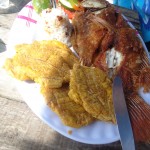 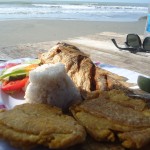 After we ate, I had the opportunity to meet the village boys. I soon discovered they loved having their photos taken. I also discovered these skinny boys liked to pose in positions that they perceived were macho, trying to bulking up their young bodies to emulate the image of man.

It was fascinating to watch, and they all seemed fabulously comfortable displaying their version machismo grandeur. I was reminded of a peacock watching their scrawny limbs flex and contract to look seemingly larger than they were. But I saw them for the most perfect little boys they were. 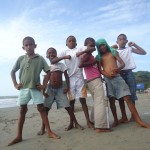 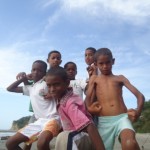 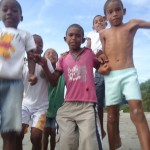 We spent an hour or so on the beach and when it was time to say goodbye, I offered hugs around. “Embrazos!” I shouted and one by one I hugged each and everyone of those children smiling with my eyes and thanking them for sharing their spirit with me.

Two little girls came over and sang for me and too, wanted hugs. 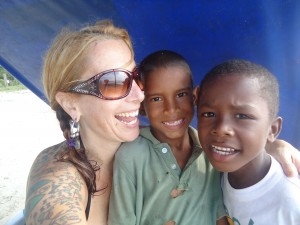 There was one particular little boy with a green shirt full of holes name “Angel”. He manged to sneak into my arms every third hug, squirming his way between the crowd of children to receive as many hugs from me as he could manage.

As we said goodbye to the group, my little “angel” walked us back, along the sandy path next to his neighborhood ghetto in order to receive a couple extra hugs.

I gladly obliged as I was so grateful for this angel sharing his slice of authentic Colombia with me.

Today Lainie considers herself a digital nomad who is living a location independent life. She and her son write and podcast their experiences from the road at Raising Miro on the Road of Life.
Read More Share
Ingredient in the Spotlight: Satsumaimo in Japan
Snow-Covered Wissahickon Sculpture