Ever hear of the name Lebohang Morake otherwise known as Lebo? If you haven’t heard of this incredible South African composer who ‘had me at hello’ before I even met him, then you will have heard of some of his work, most notably “He Lives in You,” from the Lion King, a musical I have seen close to ten times now.

He recently performed in San Francisco at a TEDx event, closing down the full day of events and speakers in a theme around global health. What’s even more remarkable is that he flew here just to sing for the event and as luck would have it, I was in the front row.

The man has no shortage of passion as he calculated the start of his song. If you’ve ever seen Lion King, and heard the song, you’ll know that its an emotionally charged one.

As the story goes, the lion cub Simba is in line to be King after his father. Little does the innocent one realize that his treacherous conniving uncle Scar also wants to be King, and he doesn’t seem to care what it takes to get there, including getting his brother Mufasa, Simba’s father removed and out of the way.

A sad and melancholy tale that will have an impact on both adults and children alike, the lyrics, tempo and intensity of the music is what leaves you breathless. For me, “He Lives in You,” has always been a reminder that when we lose people we love, their spirits remain, watching over you just as Mufasa did with his cub after he died.

While this is clearly a family tragedy that affects an ‘animal kingdom,’ we all have our tragic stories, whether its losing a father to cancer, a car accident, a heart condition or God forbid, a murder, as was the case of poor Mufasa. It’s a story of power and love and how love always prevails over power and regardless of what happens in our lives, we all have our own version of Mufasa who “live in us,” guiding us through some of our darkest hours. 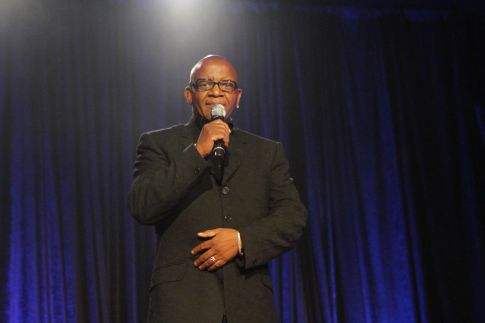 No surprise that I started to cry within seconds of Lebo’s performance. The song is incredibly impactful; combine the impact of his magical lyrics with the power of his voice and the passion in his soul and you’ve got nothing short of a winning and life changing moment if you dare to go there…

Lebo continues to tease us by returning to the stage for his second number: The Circle of Life. How it relates to Simba the cub is that he is guided to retake his pride, confront his evil Uncle Scar, and take his rightful place in the circle of life.

His voice is the first voice heard in the beginning of the film, singing the now famous chant (often considered synonymous with the film’s image in popular culture over the opening sequence. He also contributed to the sequel to the film’s soundtrack Rhythm of the Pride Lands and the film’s direct-to-video sequel The Lion King II: Simba’s Pride.

If you don’t know the song or the musical (also a film), watch it and take in “He Lives in You,” slowly. Create your own meaning for it, whatever it is that you feel. One thing I can assure you is that if you listen with as much ‘presence’ as you can muster, the song will change your life.

While the song hit my heart the first time I heard it, it may not have resonated as much as it did, many a dead family member and all, if it had not been for numerous stints in Africa and living in South Africa twice, before and post Apartheid. I love this country and as white and blue eyed as I am, I somehow ‘get’ her pain even though I never faced the discrimination of old or new South Africa that people I know have endured. South Africa is a complex place, forever changing, and I hope on a road to recovery, one which includes forgiveness and healing at such magnitudes that it thrives unconditionally in a way it never should have under Apartheid.

Lebo, next time I’m in South Africa, I hope to exchange more stories. We never even got started. My hat is off to you my new friend and I can’t thank you enough for such a precious moment in time. I know (or at least I hope you know this): Your lyrics and the passion beneath them have changed so many thousands of people’s lives….All I can say is this: I am in gratitude of your work and the impact it has had on so many, including me.

ALL – see the videos I shot at the performance (Part I) and (Part II) on YouTube, also embedded below for easy viewing.