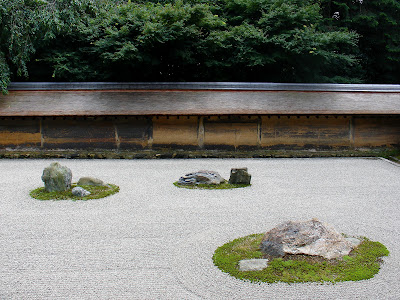 There’s a temple in Kyoto called Ryoanji or “Peaceful Dragon Temple.” In it is a rock garden that has 15 strategically placed boulders in a sea of racked stones. From any view the viewer can only see 14 at a time. These represent perception as well as teach those looking about imperfection and limitation. Try as anyone may, most can only see 14 stones within one glance. It is said that only an enlightened person can see all 15. For some reason I thought about this place today as I read the news.

I’ll draw upon two very polarizing things that I found which lead me to this place. First off is the cowardly way the TEPCO CEO Masataka Shimizu has handled this entire crisis. Since the first few days he vanished from the public scene and declined making any addresses. In full form TEPCO and its execs have painted a perception competence, confidence, control. The fact is they have failed to contain the melting reactors and manage this crisis properly.

They have failed to keep us informed and reassured. Through it all this privileged man and his advisers have declined interviews or briefings.  Then today it’s been announced that he’s been hospitalized for high blood pressure and dizziness so he has to step aside. I believe it’s safe to say that most if not all the people in Japan today have had their blood pressure elevated thanks to TEPCO. What ever perceptions they attempt to create for themselves only unmasks their selfishness.

The damage control should be focused on the reactors and not the stock market value of their shares. At times like these people need to see strong leadership and be properly warned and informed. Masataka Shimizu is a coward, he ran and hid, then did not face up to the responsibility that he has to the people of Japan and the world. Let me share now what real selflessness and courage is. I read something that’s not been brought to light in the news outside Japan. I posted the link from Japanese news paper Daily Mainichi. Here name was Miki Kondo; a city crisis management civil servant; 25 years of age.

She was in Miyagi and and broadcasting on the radio during the earthquake. As buildings shook and the citizens of her community fled to shelters, she warned them of the earthquake. When the earth settled and the quake quieted like a calm before the storm, she monitored the tsunami warnings. Her voice again aired with messages telling people to head for safety, telling people to not go back to their homes but go to higher ground, telling them that a large tsunami was coming in from the sea. “Please run away fast.., a tsunami is coming, a very large one is heading here, you are in danger…” Fully aware her concerns were focused on the 17,000 people in her home town Miyagi.

As she stayed in her broadcast station. Here voice was heard by many including her fleeing mother. As her voice spoke, the waves came over the levees and barriers. As many listened and went to higher ground she continued to warm people. When cell towers collapsed and other forms of communication began to vanish. Only her voice and the horns of the tsunami alert systems could be heard. As sweltering violent walls of frigid water brought ships into the streets and tore buildings off their foundations her voice carried on warning others until it was engulfed and silenced. Here was an incredible person. Imagination can’t even convey what she and those in her building went through in the moments before the waves overwhelmed their broadcast station and took their lives. I hope that readers and the world will remember this woman. She showed true selflessness.

The only perception she conveyed was the truth and imminent danger. Her only concern was peoples lives. I think at some point in those moments she rose beyond our limitations and imperfections and demonstrated the best that humanity can have to offer. Her view was not clouded by ego and arrogance her view was guided by the concern for others. It is written that a part of enlightenment is the relinquishment all worldly attachments. Once you attain this you are no longer trapped by the viscous circle of attachment and greed. Once enlightened you can lead others from suffering. In the serene Ryuanji Zen Garden in Kyoto; I believe that of all people in this world, this woman would have been able to see all the 15 boulders in the garden at a glance.

Linh Vien Thai is Amerasian, born in Dalat, South Vietnam, where he continued to lived during the war. He left for the U.S. and is now an American living in Tokyo. He enjoys adventure traveling and doing what's right to make the world a better place.
Read More Share
The F**K of the Irish
Remembering Elizabeth Taylor’s Breasts