It has been wonderful getting back into hiking again. As a young girl, I spent all of my summers romping around the trails of the Appalachian Mountains.  Though I love the coast, I constantly crave mountain energy.  70% of Korea’s landscape is filled with mountainous terrain, so there are countless places to adventure and explore. Now that the weather is slowly warming up, I decided it was time to take an expedition down south. 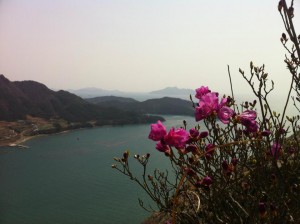 I found a particular trip labled “Jagged Ridge Island Hike and Jinhae Cherry Blossom Festival”. Just the title of the trip sounded enticing, but it was the description that sold me. The description said, “Let’s hike Sa Ryang Do Island! Sa Ryang Do Island hike is one of those hikes avid Korean hikers know about, but much of the non-hiking population does not. The island is a small island (40min ferry ride from Tong Young) but has an interesting hiking route . . .  The entire trail provides spectacular views of the surrounding blue ocean almost the entire time. Some have said this is the best hiking they have ever done in Korea. Its that good.”  “Wow!” I thought. I knew this would be a special trip, and I did not want to miss out!

Typically weekend trips leave on Friday nights in order to cram as much as possible into the short weekend. I got off work from my hogwon at 10:00pm, so I only had enough time to stop at my apartment, grab my bags, then rush to the subway. Our bus departed around 11:30pm, and we drove through the night to arrive at Tong Yeong around 6:00am.

We arrived at the harbor, just as the sun was rising over the mountains.  It was so refreshing to breathe in the ocean air. We boarded the ferry, where we all sat on the heated floors. It is Korean custom to take of your shoes in sitting areas, so the room was slightly stinky of feet.  It seemed almost everyone on the ferry was there for hiking purposes. One group of men particularly amused me. There were about 12-15 of them, all sitting in a circle. They were eating kimbap and drinking beer and soju at 7:00 in the morning! They were troupers!

As we arrived at the island, our guide kept making comments that we may hate him at the end of the day. He kept warning us that this hike was going to be challenging and wanted to make sure we were prepared for what was about to happen. I felt a slight tinge of nervousness run through my body, but my friend Rachel, who I have been hiking with before, assured me I was more than capable to handle it. As we began the hike, I found it to be a steep climb, but nothing that I was not used to. I was relieved and thought to myself, Oh this is not bad at all . . . Let’s just say I was quite unprepared for what was coming next!

Suddenly, the rocks became very jagged and steep. Maneuvering began to get very tricky. In order to climb down, I literally had to get into a crab walk position, so I would not go tumbling down.  I was very nervous, but I was glad to meet two other people that were feeling the same as I was. We decided to sing a silly song as we crab walked, to make the descent less daunting. As we carefully maneuvered each ledge with great caution, I kept thinking to myself, “well it can’t get any more challenging than this . . .” Again, I was wrong.

All of the sudden this gigantic boulder emerged at the peak. Attached was a rope with people rock climbing up. I had to sit down for about ten minutes, staring at the massive boulder. I honestly considered giving up. There was no way I was going to scale a mountain on a rope! My guide guaranteed, that once I got closer I would see that it was not as intimidating as it looked. I took a deep breath and decided, “alright, it’s now or never”. I said a prayer to myself and began the ascent.

Half way up, I accidentally looked down, and had a small internal panic attack. My breathing began to get rapid, as fear shot through every vein in my body. I took a deep breath, and then I continued the climb. Reaching the top was the most incredible feeling. I was full of adrenalin and had an incredible sense of accomplishment. I thought that I had conquered the most challenging feat of my life, but then I remembered, “Uh-oh, I have to climb down”.  Luckily my adrenalin rush had not subsided, so I was able to use this newfound energy to conquer the rest of the hike.

When I finished the hike I was utterly exhausted! I could barely even eat! We had a late lunch in the island harbor. I had a delicious soup with handmade noodles. When we got back on the ferry, I passed out for the entire ride home. We got back on the bus, then rode about an hour towards the district of Tong Yeong.

Seoul Hiking Group is one of the largest Facebook groups for those who live in the Seoul Area. Seoul is a basin and is surrounded by mountains on all sides, so there are tons of places to explore right in the Seoul Area.  If you do not live in Seoul, “Adventure Korea” and “When in Korea” also provide tons of awesome adventure trips. Both “Adventure Korea” and “When in Korea” offer other types of trips too;  you can take trips to the DMZ, temple stays, trips to Jeju Island, booze cruises, or getaways to various festivals and events all over Korea!