The capital of Belgium may be known as the Capital of Europe, but it is also, at least as far as most chocolate aficionados are concerned, the World Capital of Chocolate. Ever since the Brussels chocolatier Jean Neuhaus invented the praline 100 years ago, the city has been at the forefront of the chocolate business. There are a million residents and some 500 chocolatiers, about one chocolatier for every 2,000 people. The average Belgian consumes over 15 pounds of chocolate each year, one of the highest rates in the world.

But these days, the industry is changing. With countries like Germany and the Netherlands becoming larger European exporters, in Belgium, a new class of chocolatiers is finding innovative ways to hold on to the country’s chocolate crown. They are breaking away from traditional pralines — which Belgians classify as any chocolate shell filled with a soft fondant center — and infusing ganaches with exotic flavors like wasabi or lemon verbena, and creating such imaginative pairings as blackcurrant and cardamom and raspberry and clove.

I had gotten a taste of Brussels’ classic-contemporary chocolate dichotomy last year on an overnight sojourn from Paris. But between the flea marketing, beer sipping and Art Nouveau strolling — other big draws of Brussels — there was little time for chocolate.

So this fall I returned, intent on exploring three centuries of chocolate history in three days. It was an ambitious task: the city is home to two of the biggest chocolate companies in the world, Godiva and Leonidas, as well as scores of boutique chocolate-makers and haute chocolatiers. 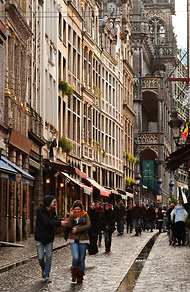 I already knew from my previous visit that Brussels is a curious mix of conservative and avant-garde — in the European quarter alone, you have the cylinder-shaped glass dome of the European Parliament’s Paul-Henri  Spaak building hovering over the neo-Classical-style Place du Luxembourg, while sgraffito-studded beacons of Art Nouveau architecture reside nearby. The city’s chocolate scene reflects that tension. The result is some wonderfully surprising creations. To streamline my sampling strategy, I turned to Robbin Zeff Warner, an American expatriate and a former professor of writing at George Washington University who has been blogging about Belgian chocolatiers since her husband’s post with NATO took them to Brussels in 2008.

“You have chocolate for tourists, and chocolate for Belgians,” Ms. Warner said of the national hierarchy in which chocolate produced by manufacturers like Côte d’Or and Guylian are devoured in vast quantities, but mostly by the city’s six million annual visitors. Bruxellois, Ms. Warner said, prefer the artisanal makers. “The big-name big houses are great. But seeing and tasting real handmade chocolate, while buying it from the person who made the chocolate, is something special.”

To prove her point, as we were leaving Wittamer, the century-old chocolatier in the center of the city that seduces both locals and tourists with its heritage recipes, Robbin suggested we go to Alex & Alex, a nearby Champagne and chocolate bar. Though its chocolates, made by Frederic Blondeel, aren’t made on-site, they’re acknowledged in some circles as some of the best in the city.

The bar is tucked away on one of the antiques store- and art gallery-filled streets that shoot off the Grand Sablon, Brussels’ central square. Its dark, cozy interior, along with the glass of Drappier rosé and array of square bonbons before me, was a lovely respite from the trolling chocolate tourists outside. I found the herbaceous notes of Blondeel’s basil ganache too reminiscent of pesto, but the “Alex’Perience” chocolates were another story. The first velvety impression of high-quality chocolate was followed by a flood of sweet, fruity cassis.

I spent the afternoon circling the Grand Sablon, which, with no fewer than eight chocolatiers, is the city’s epicenter of chocolate. I sampled golf-ball-size truffles at Godiva and molded hamster heads at Leonidas; organic nougat from Pure and minty ganaches at Passion. At Neuhaus, I tried a dark chocolate truffle filled with buttercream and with speculoos, a spicy Belgian cookie.

The more I strolled, the clearer it was that the level of sophistication is evolving. The packaging and presentation at newer chocolatiers is as slick as a Place Vendôme showroom, while the associated terminology — like “cru” and “domain” — is akin to what you’d hear from sommeliers. Such was the case at Pierre Marcolini’s two-story flagship. Smiling saleswomen stood over the glassed-in display of small, rectangular bonbons that looked as exquisite as jewels. Backlighted shelves on the opposite wall showcased what Mr. Marcolini is famous for: his single-origin Grand Cru chocolate bars.

IN 2004, Mr. Marcolini raised the bar when he started scouting the globe for the best cocoa beans. He became the only chocolatier in Brussels to work directly with plantations in countries like Venezuela and Madagascar, bringing the beans back to his ateliers for roasting and grinding.

“Most people think it’s the percentage that makes a difference,” said a saleswoman, speaking of the amount of cocoa in the confections, “but it’s the origin of the cocoa bean that does. It’s a little bit like wine.” Indeed, when I bit into the Cuban cru — Marcolini claims to be the only chocolatier in the world working with cacao from Cuba — I could detect vibrant notes of dried cherries in the slightly acidic chocolate.

The above original is from the NYTimes and for the original post here in their travel section which includes the remainder of this article in its entirety. Photos: Josh Fistik.