We arrived in Ishinomaki the late afternoon from Tokyo. Our destination was Ishinomaki Senshu University where various relief groups were staging their supplies and coordinating volunteering efforts. Our contact here had sent us a list of things which were needed by the various shelters and groups assisting the earthquake and tsunami survivors. These items included cooking oil, soy sauce, soup stock, noodles, eggs, broth, as well as hardware for clean up work. Sand bags were one of the most requested items on the list. These were used to contain the mud and sludge which were shoveled from homes. We purchased nearly 2,000 of these. As well as sandbags, garden hoses, crow bars, work gloves, masks, goggles. and ropes were requested and given. These supplies were stored in a warehouse and a large white tent with the UN’s WFP (World Food Program) markings on it. 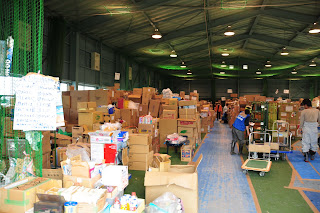 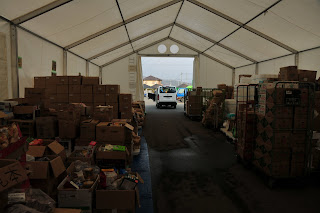 We organized and executed this delivery run on our own as I did not want wait for some coordinator to decide when and if I could be on a list of volunteers to come to Tohoku. Did not think waiting was a productive option. So with many calls and emails, here we are.  I’m honored to have been able to get 2 friends together to collect the funds and donations for our run. In order to make sure we made a difference, I made sure we contacted and worked with the right people. In Tokyo, I contacted 2nd Harvest who then put me in touch with the teams at the university. One active group was Peace Boat; who had a lot of youth volunteers. 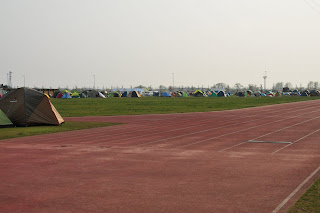 Driving into the campus I was happy to see a lot of cars and a tent city which made up a crowd of volunteers. The license plates and signs showed that many had traveled from all over Japan. As volunteers it’s nice to know that we are not alone so that the ones who need us are never alone. The first task was to sign up for the following day’s work on a clean up crew. The second task was to drop off the hardware at the warehouse. As we unpacked I never thought I’d see people so excited to see hoses. When we showed them that we brought a few hundred meters of garden hoses a few of the depot workers cheered. Of course the sand bags and other items were also gratefully received. 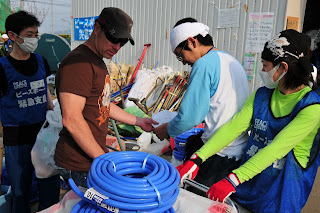 With the hardware unloaded we drove over to the tent to unload the cooking supplies. Both of the storage facilities were well organized and workers hastily recorded the inventory and marked them for future distribution. Everyone on site looked exhausted but still very motivated. Any donation, effort, contribution, and assurance will definitely contribute greatly to the needy and the rebuilding of the surround area. Once we finished we left for Onagawa. I wanted my friends to see for themselves why were were there. The drive from Ishinomaki to the coastal town of Onagawa took us through a few hills and inlets. The damage had gradients which match the elevation of the places along the way. At some points there could be total devastation, then with a slight incline up a hill the area was untouched. Once back into a valley, it was again filled with wreckage. When the road opened up to a flat plain that stretched to the sea. It became difficult to find anything that was not broken or ripped apart. People’s homes were nothing more than splinters and shells. The roadside and blocks were piles torn pieces ranging for cars, clothing, household items, and structures. It was as if everything was put through a shredder. There was an uncomfortable silence then a mix of bewildered words. Why did this happen became a paradoxical question. Why we had come all this way and if we were doing the right thing became clear. When you witness the remains of this type of disaster you know that entire lives were torn to bits. People are physically and emotionally ripped apart. The depth of where the tectonic plates slipped and shifted can be measured as well as the tsunami; but the pain and human cost of it all is unfathomable. 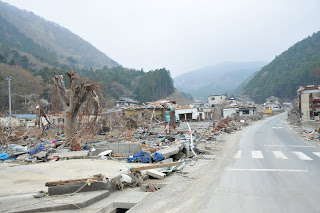 There are many events like these in the world today. I read that in the US there were many tornadoes have ravaged towns in the mid west. It all gives each of us reminder of how fragile life is. It also brings out the best and worse in us. I tend to seek out the good. At times like these anywhere, I fundamentally it’s important to do something right and give what you are able. It doesn’t matter if it’s here or there; it just matters.

Linh Vien Thai is Amerasian, born in Dalat, South Vietnam, where he continued to lived during the war. He left for the U.S. and is now an American living in Tokyo. He enjoys adventure traveling and doing what's right to make the world a better place.
Read More Share
Rare and Old Images India
Ulaan Baatar’s Amusement Park