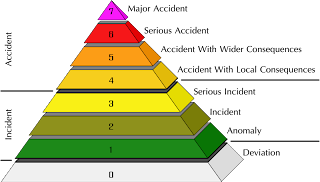 Chernobyl = Fukushima: Now I know what’s it’s like to live within 200 miles of Chernobyl. The Japanese government upgraded the nuclear situation to a 7 on the International Nuclear Incident Scale. It went from a level 5 which was “ACCIDENT WITH WIDER CONSEQUENCES,” skipped 6 which was “SERIOUS,” and right to a 7.

Now this incident is equal to that of the worst nuclear disaster in history. Technically at 7 it’s now a “MAJOR ACCIDENT.” The good folks at the IAEA have even color coded it for us. Ironically at the same time the government is reassuring us that although there is contamination, it is not posing any adverse health dangers. This did not prevent the order from the government to tell farmers in the outer lined areas of the reactors to stop planting rice and vegetables. Also that all people within 12 miles of the plant have been evacuated. The level upgrade was somehow attributed to the amount of radiation that has leaked and that radiation has “-contaminated the air, tap water, vegetables, and seawater…” We are reassured that it’s only about 1/10 of what Chernobyl leaked however it may eventually exceed Chernobyl emissions.

The key message after the change to 7 was that the upgrade is not related to the level of danger pertaining to any health and or adverse affects… So, I’m to accept that although there is a lot of radiation leaking into the environment, which is equal to the accident in the Ukraine that turned the town of Pripyat (atom town) into a ghost town; we are not in danger… Breathe in breathe out (no need for a mask yet so they say) and calm myself down. I’d like to believe that we are safe and that there is a low chance of harm. I hear this from many experts and people that I know who are well educated regarding nuclear energy.

But wasn’t Chernobyl a bad thing? Didn’t they have to relocate 50,000 people and depending on which statistic you read the death toll attributed to the MAJOR ACCIDENT varies from a few thousand to over several hundred thousand. Chernobyl was in the middle of nowhere. We are in Japan where usable land is sparse and populations are denser. It’s a lot easier to cordon off 200 square miles in the former Soviet Union than here. We are on an island that’s not that big.

Will parts of Fukushima Prefecture be an abandoned ghost town like Pripyat? What will happen to all the industries like agriculture, fishing, and manufacturing in the area? How could these and the fact that they told people to leave mean that there are no adverse affects? These concerns are what’s on our minds here as we monitor the various disasters concurrently inflicting us. I think the officials need to SERIOUSLY consider explaining the WIDER CONSEQUENCES of this nuclear situation with more clarity on a MAJOR scale. We are given very conflicting information which leaves us puzzled and frustrated. All this while more earthquakes and aftershocks bombard us. Since the large quake last night we’ve had about 100 smaller quakes. The photo I shot below I believe captures the feeling and mood of many of the people here. 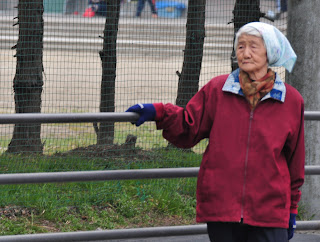 Linh Vien Thai is Amerasian, born in Dalat, South Vietnam, where he continued to lived during the war. He left for the U.S. and is now an American living in Tokyo. He enjoys adventure traveling and doing what's right to make the world a better place.
Read More Share
Participatory Mapping as a Means of Protecting Forests in the Congo Basin
Spring Open Studios in San Francisco