We only had an hour and a half and I was not in the mood for shopping. 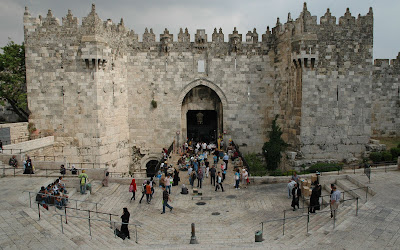 We entered the old city through Damascus Gate on a mission to find old coins. Old coins to make jewelry with, old coins I find on my adventures around the world. It was a hot day, we had just left Bethlehem, made it through the Israeli checkpoint and like I said, I was not in the mood for shopping. 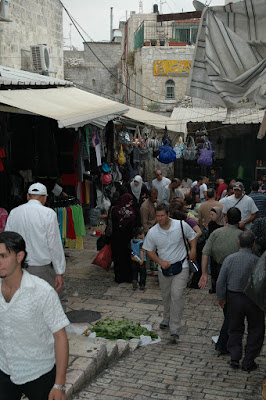 We made our way to one of the Stations of the Cross, part of Via Delarosa, otherwise known as antiquities row. There were many Christian Pilgrims walking through the small ancient street following the path of Jesus carrying the cross. I, was looking for a coin dealer. We wove our way through people and came across a shop with coins. I looked a bit and still just didn’t feel like shopping. Continuing along the street, we looked some more. It just didn’t feel right. So, we found a small Arabic café, we sat and ate hummus and falafel, read our books and suddenly large group of Christian pilgrims from Alabama joined us. I stared outside into the ancient surroundings and thought to myself, I have a 1000 blessings in my life, (as my 92 year old grandmother says)

Why at this moment, am I numb to this sacred surrounding? We were completely surrounded by people who had traveled half way around the world to come to the spot, the spot Jesus carried the cross from one part of Jerusalem to where he was going to be crucified, and all I could think about were coins and whether or not I felt like buying them.

Immediately becoming aware of this attitude, I shifted it and engaged, talking to my neighbors, listening to the stories of their pilgrimage and hearing the excitement in their voices. It was magical, quite magical!

We slowly finished and I told my dad, let’s go back to the shop, I think I’m ready to buy some coins….

And I did. 2000 year old Roman coins found beneath the ancient and spiritual city of Jerusalem, along with 1800 year old Greek coins and Byzantine coins all of which I plan on setting in gold to make earrings and pendants and rings…. And I bought an old Bedouin headdress, that I may or may not take the coins off to make into jewelry. 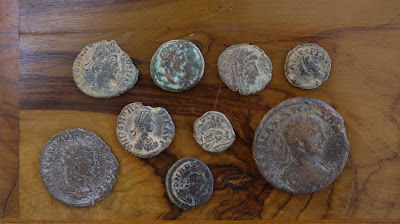 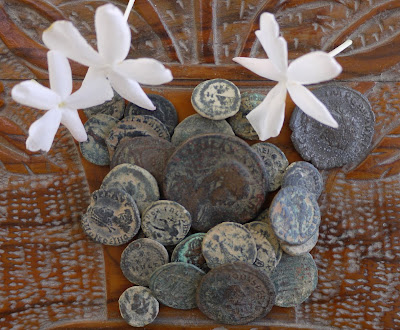 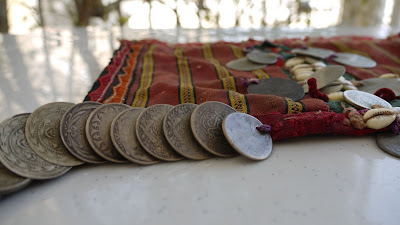 Dad looked at his watch and we had to go. We were meeting his childhood friend, he hadn’t seen her since 1981. So, like we entered, we left, weaving through the crowds of pilgrims. This time with a smile on my face, coins in my hand and happiness for all those who were on their sacred journey.

Thanks to my sister for the first two photos.

Samia Shalabi is a Seattle based artist & designer, yogi and traveler who has roots in the Middle-East, was raised in the middle-west and is drawn to India. She has a degree in geology, has traveled all over the world with a backpack, and believes in following her dreams. Samia does yoga most mornings, enjoys walks around Seattle, loves to laugh, and daydreams about where to travel next. She is working on a movie shoot in France.
Read More Share
On Being Poor and Rich in Algeria
Bizarre Sightings in Philly