Every year millions of Hoosiers and other Midwesterners blast through Kentucky, Tennessee, and Georgia on Interstate 75, trying  to get to Florida as fast as they can.  Corbin, Kentucky, is one of dozens of little towns that we blow by without even seeing, hidden by the mountain ridges. 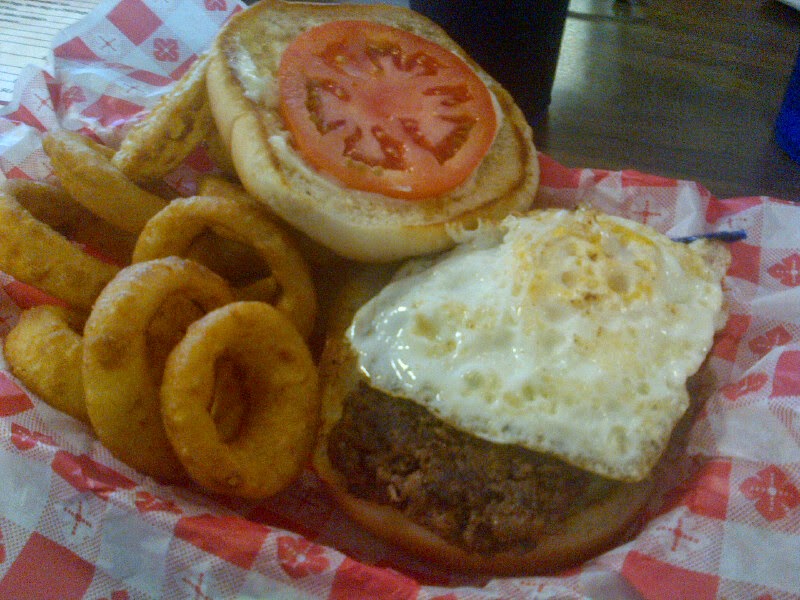 Probably all of them have a hidden treasure of a diner or two, but a couple of things make Corbin more worthy of others of a brief detour.  If you’ve got an hour to spare, it’s the town closest to Cumberland Falls, one of the great under-appreciated natural wonders east of the Mississippi.  And foodies may recognize Corbin as the home of Colonel Sanders and birthplace of Kentucky Fried Chicken.
And indeed, you can still enjoy a meal as well as tour a museum in the quaint refurbished cottage where Colonel Sanders started his empire.  But, this blog is not called “Hoosier Chicken Boy.”
Or you can ask someone where to go for the local color.  Odds are, they’ll be delighted to tell you that the Dixie Café is open again.
The Dixie is a classic hole-in-the-wall main street diner, serving breakfast and lunch, that dates back at least to my mother-in-law’s childhood in the 1930s.  A few years ago it closed and the space briefly became an Italian restaurant, but in the last year new owners bought it and restored/updated it to a version of its former “glory.”
It’s still got the 2’x4’ acoustic ceiling and the red-and-white tile floor, accompanied by new, no-nonsense booths and tables, with a lunch counter in the back.  The walls are freshly painted in the red and gray colors of the local high school, the Corbin Redhounds (hey, there’s another alternative nickname for the Washington Professional Football Club), and adorned with a combination of letter jackets, old sports calendars, and framed artwork of local landmarks for sale, including a striking image of an L&N locomotive, a tribute to the employer that kept my in-laws fed and shod through the Great Depression.  You have to get close enough to read the price tags to realize that the images are filtered and soft-focused photographic prints.   If they had actually been paintings, I would have bought a couple for $105.  I may still.
Whether your clientele is locals or tourists, if you’re down the street from the original KFC, you need a gimmick.  At the Dixie, it is the “chili bun” – a hot dog bun filled with finely-ground beef in a chili sauce, with no frankfurter involved.   The sauce has just a touch of heat, seasoned primarily with black and cayenne pepper, and maybe a hint of cumin.  They come two to a platter with a side for $4.25, and they are ample enough that my 14-year-old didn’t need dessert afterwards.
Hoosier Burger Boy and I grew up in rural  northern Indiana, where his family raised beef cattle and my family’s blood money came from poultry, so I ordered the Dixie Eggburger for $5.65, plus a 50-cent upgrade to onion rings.    The onion rings were of the frozen variety, but of good quality for that kind, well-drained so they weren’t greasy, and plentiful.
The burgers at the Dixie are fresh and hand-made.  No perfect circles here – mine was bigger than 6 ounces but not a half-pound, and bore a striking resemblance to a map of Ireland.  It was thick enough that they probably should have asked how I wanted it done.  It came out medium-rare, which was perfect for my tastes, but maybe too pink for some.  They did ask me how I wanted the egg, and they nailed the “over-medium”, with just enough yolk to drip some on the plate without getting the large, white-bread bun soggy.   The burger lacked any kind of seasoning to make it truly memorable, but was more than satisfying for the price.
Despite the antique coke machine inside the front door, the Dixie offers Pepsi products and both sweetened and unsweetened tea, which is a pleasure.  In this part of the country, if you order iced tea without asking, you’re probably going to get “swait tay.”
I don’t think you need to be accompanied by a delighted Corbin expatriate to enjoy the Dixie, but that was surely part of the pleasure.  Every household at my wife’s family reunion made a detour from the state park into town to have at least one meal at the Dixie.  With or without a Corbinite (Corbinian?  Corbinaria?), a trip to the Dixie feels like a homecoming.
Burger 3 Spatulas out of 5
Onions Rings 2.5 Spatulas
Dixie Cafe
208 S. Main St.
Corbin, KY 40701
606-523-6270
Contributed by Ron Newlin.
Scott R Kline