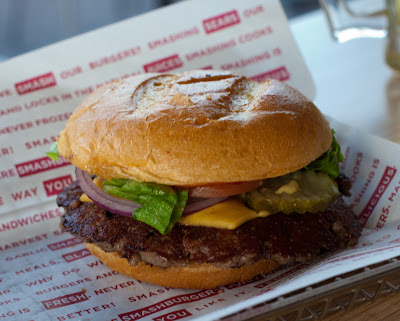 Smashburger in Thousand Oaks, CA presents a clean modern looking restaurant to have your hamburger. I liked the laminate wood grained tables and wood chairs.  No faux 50s aesthetic that has become a cliché in burger places. You walk right up to the counter and order from the flat screen menus behind the server. I ordered up a Classic Smash in the big size ($5.99). The regular ($4.99) is 5 ounces. The big is a half pound. They also offer a double, which is two quarter pound patties rather than one half pound ($5.99).
I barely sat down and my order was there. It is a nice looking burger. The yellow bun was left open with the burger on one side and all the veggies and condiments on the other. I assembled as served and took a bite. The patty was cooked through, but still plenty moist if not particularly juicy as billed. The theory on the “smash” in Smashburger is that they start with a ball of fresh Angus beef and then smash it onto a buttered griddle, searing in the flavor and juice. I have always thought that you compress the ground beef as little as possible to keep the patty light, juicy and soft. The thicker patty also allows more pink beef in the middle. Having said all that, this is a very high quality enjoyable burger. The meat tasted savory and flavorful. All the flavors had a nice balance with the very fresh veggies: pickle chips, green leaf lettuce, tomato slice and red onion. There is also mustard and ketchup.  The American cheese was mostly melted, although it could have been more so. 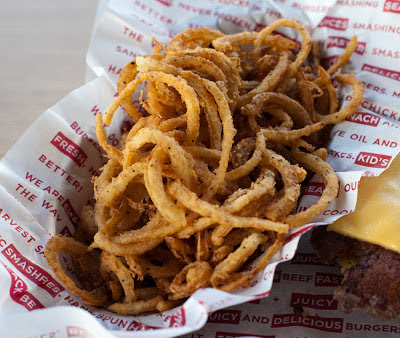 The Haystack Onions ($2.29) were light, thin, peppery and flavorful. Served hot and crisp they were supposed to be served with a dipping sauce, which I did not get. I had to go back to the counter and ask for it. Turns out that they were out of the containers for it and had to improvise a french fry container for it. Not a big deal, but leaving that great sauce out of the order would have robbed me of the delightful concoction. The sauce stings the taste buds with a delightful, creamy horseradish mix.
The Smash Fries were the best of the lot. For a chain, I really appreciate the creativity here. Smashburger rolls the thin, crisp fries in rosemary, olive oil and garlic. The subtle garlic didn’t overpower like garlic fries. These fries would be great without the extra spices, but with them, they are a don’t-miss addition to the burger.
Smashburger is a worthy option against other burger chains. It compares well with In-N-Out and beats Five Guys in my opinion. The more substantial burger is a plus. It is more expensive than the previous mentions, but that is not unexpected given the quality of the items ordered. 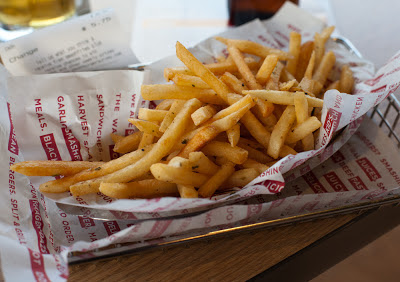