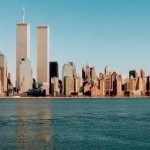 Ten years ago, this day, the Lower Manhattan skyline in New York City, changed forever. To be replaced by indelible memories of the World Trade Centre towers engulfed in billowing smoke clouds and giant flame-licks. And the inerasable truth of losing, yet again, acclaimed architectural heritage to mindless terror strikes. Even as the realization sinks in that the consequent collateral damage and its residual effect will never quite be quantified.

Earlier that same year, the world had witnessed with mounting dejection, and grieved at, another intentional destruction

of ancient sculpted art at Bamiyan. Fine examples of the Gandhara style, two Buddha statues, standing tall since the sixth century, were obliterated forever from the recesses of a cliff they had been carved into. At the heart of the Silk Road, Bamiyan had once offered respite to traders between China and the Roman Empire, and had been a centre of Buddhist cultivation.

Closer home, almost an entire decade prior to these shameful happenings, an unruly mob had brought down a 16th century mosque in Ayodhya by nothing more than the sheer might of their misguided anger. Built under the patronage of Mughal Emperor, Babur, it had the distinct features of the later Tughlak period. Its demolition unleashed mayhem, rioting and destruction (of human life and heritage) of a nature indescribable.

It is no secret that political instability, urban development and tourism continue to threaten our cultural and natural history. Striding communication facilities are no longer the primary reasons, as historically accepted, for a vulnerable and shrinking world. They have been redefined and recounted to include endangered eco-systems, strife and cultural hostilities.

Oftentimes, and regrettably so, placing out of reach of travelling enthusiasts, some of the most celebrated destinations dotting the globe…

When she is not travelling, she is writing about it. Over the past decade or so, she has created an impressive writing repertoire for herself: as a columnist with Hindustan Times, as a book reviewer for The Tribune and as a contributor to travel magazines in India and overseas. Her work-in-progress, the documenting of colonial heritage along the Old Hindustan-Tibet Road, is an outcome of her long-standing romance with the Himalayas.
Read More Share
Lebanese Koosa Straight From the Stove
Muslim Family Remembers Grief of Lost Husband & Father From 9/11 Tragedy