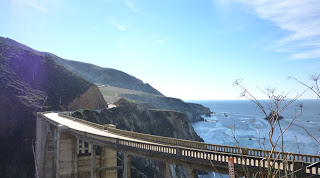 Just 20 miles south of Carmel and not far from the much-photographed Bixby Bridge (top photo) lies Andrew Molera State Park, one of Big Sur’s most accessible hiking areas. The gentle, flat camp trail of only a couple of miles follows the Big Sur River and leads past campsites to a long, curved beach and a secluded cove nestled against high bluffs. Also along the camp trail is the Cooper Cabin, built in the 1860s and the oldest structure in Big Sur. Early settler Molera ran his dairy farm here, producing some prized Monterey Jack cheese.
(Check the park’s website for latest on trail conditions because there’s some work being done on the trails this winter and a seasonal footbridge over the river was not up when I visited in late November).
The park is a 4,800-acre swath of wilderness with meadows, oak and redwood groves, wildlife and beautiful three-mile-stretch of Pacific coastline where you may spot sea lions, sea otters and migrating whales.

Andrew Molera also includes a quaint old farmhouse, picnic area and fruit orchard that’s open to the public where you can see how the early settlers, cattle ranchers and dairy farmers lived. And, I learned on a visit last week, the park has a new addition, the Ventana Wildlife Society’s Discovery Center, which opened in the last couple of years in a restored old barn near the farmhouse and park entrance. 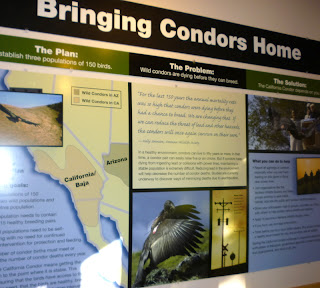 This local non-profit group, dedicated to native wildlife and their habitats, worked to reintroduce the bald eagle to central California. Restoring the wild population of California condors is now the society’s focus and the center has several interactive exhibits on these ugly-but-fascinating animals, which are the largest flying birds in North America, their wing spans reaching more than nine feet. If you’ve wondered where best to see them and how to identify them, this is the place to go (hint for identifying them: there are white or mottled triangles under their wings, unlike turkey vultures). Who knew that condors mate for life, have no vocal chords and can live for 50 to 60 years?