I saw smoke swirling in the distance two Thursday mornings ago, as I stepped out of my hotel in Muscat, Oman to begin my morning run. Maybe it’s frankincense, I thought, and imagined all the magic that awaited me during my road trip around the Sultanate.

But magic was the last thing the aroma that soon flooded my sinus cavity evoked. Someone nearby, it seemed, had decided to burn their plastic waste. I did my best to avoid respiring until the air cleared, and simultaneously picked up my pace. I’d soon be at the Corniche, where I’d watched the sun go down just hours earlier. Realistically, the chorus of howls and barks began in the same moment the pack of wild dogs appeared in my path, though in my frenzied mind the feral beasts sang their song to warn me. Still paranoid thanks to the threat of rabies that had loomed over my August trip to Mongolia, I did an immediate about-face, retreating back through the hydrocarbon haze.

Had my decision to finally visit Oman, after two aborted trips over the course of the previous five years, been a mistake?

The opening riff of “Hotel California” began playing as I sat down in the crimson director’s chair, though I wasn’t sure whether it was the original version, on account of the ancient sub-woofer it blared from.

At my feet were four Omani men I’d never met and, once he returned from fetching something in his pick-up truck, a fifth. Number five had seen me wandering along the so-called “White Sand Beach” between Muscat and the port city of Sur, and insisted I join him and his friends for refreshments. As he loaded a small pipe with what I assumed was hashish, the voice on the speaker was unmistakably Don Henley’s.

This almost hadn’t come to be. Following an unsuccessful sojourn to the so-called “Turtle Beach” at Ras al-Jinz, I’d consigned myself to an afternoon binging the final season of House of Cards. I’m not sure what precisely motivated me to continue driving past my Sur hotel—or certainly, all the way to the White Sand Beach, which sits halfway to Muscat, adjacent to popular hiking spot Wadi Shab.

But the moment a friendly stranger called out to me from atop a brush-covered sand dune, I knew I was in the right place.

Sur, assuming you’re not holed up in one of its white sandstone buildings watching Netflix, is one of Oman’s most picturesque cities, famous for forts and shipbuilding and scenic ocean views. It’s pleasant, and makes for a good Instagram post or two, but it’s not the sort of place that changes the fundamental narrative of a trip.

To have happened upon a gathering of local people my own age, though, and then get invited to partake in the disarmingly familiar way they decompress from their workweek—well, that’s a game changer. Real life Oman. 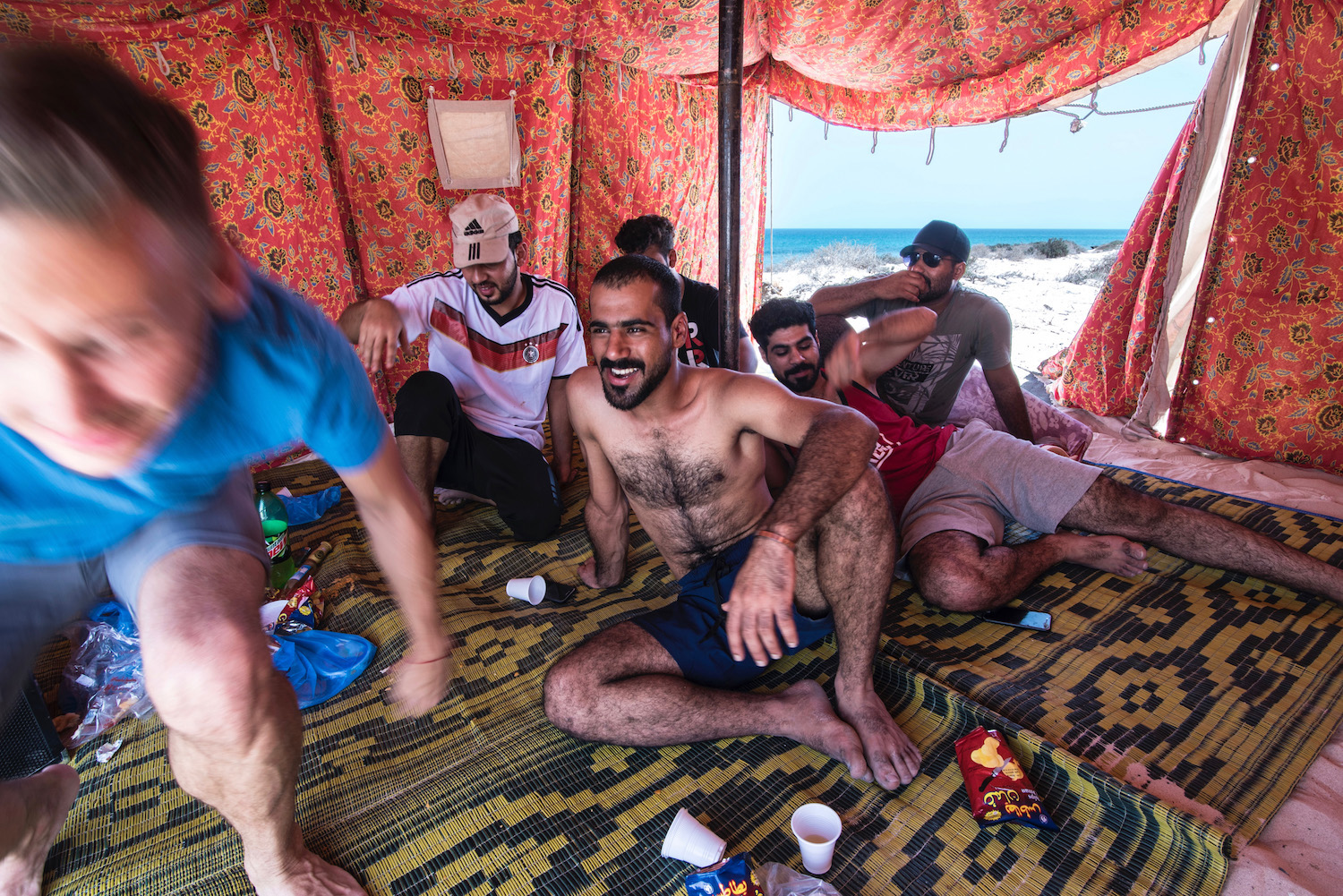 The icing on the cake was the one of them—the most attractive one, for what it’s worth—actually propositioned me on my way out the door the tent didn’t have. I won’t divulge whether or not I took him up on his offer, but I will say that the lyrics of the Eagle’s most iconic song rung in my head as I sped eastward: Though I’d checked out from my Oman trip as recently as two hours prior, the last thing I now wanted to do was leave.

I’d finally crossed that euphoric threshold, the boundary that separates visiting a place from actually being there.

In the Empty Quarter

A sandstorm was taking shape as I made my way from Sur to the village of Al-Wasil, where a waiting Toyota Fortuner drove me into the Wahiba Sands, the most accessible part of Oman’s Empty Quarter.

The tempest, at its most intense moments, rocked my little Kia Forte to and fro, and even seemed to hamper the passage of a camel cow and her calf across the highway (though I saw in my rearview that both made it to the other side unharmed). I wondered how a human might’ve fared under similar circumstances, though I never imagined I’d have the chance to see it myself. 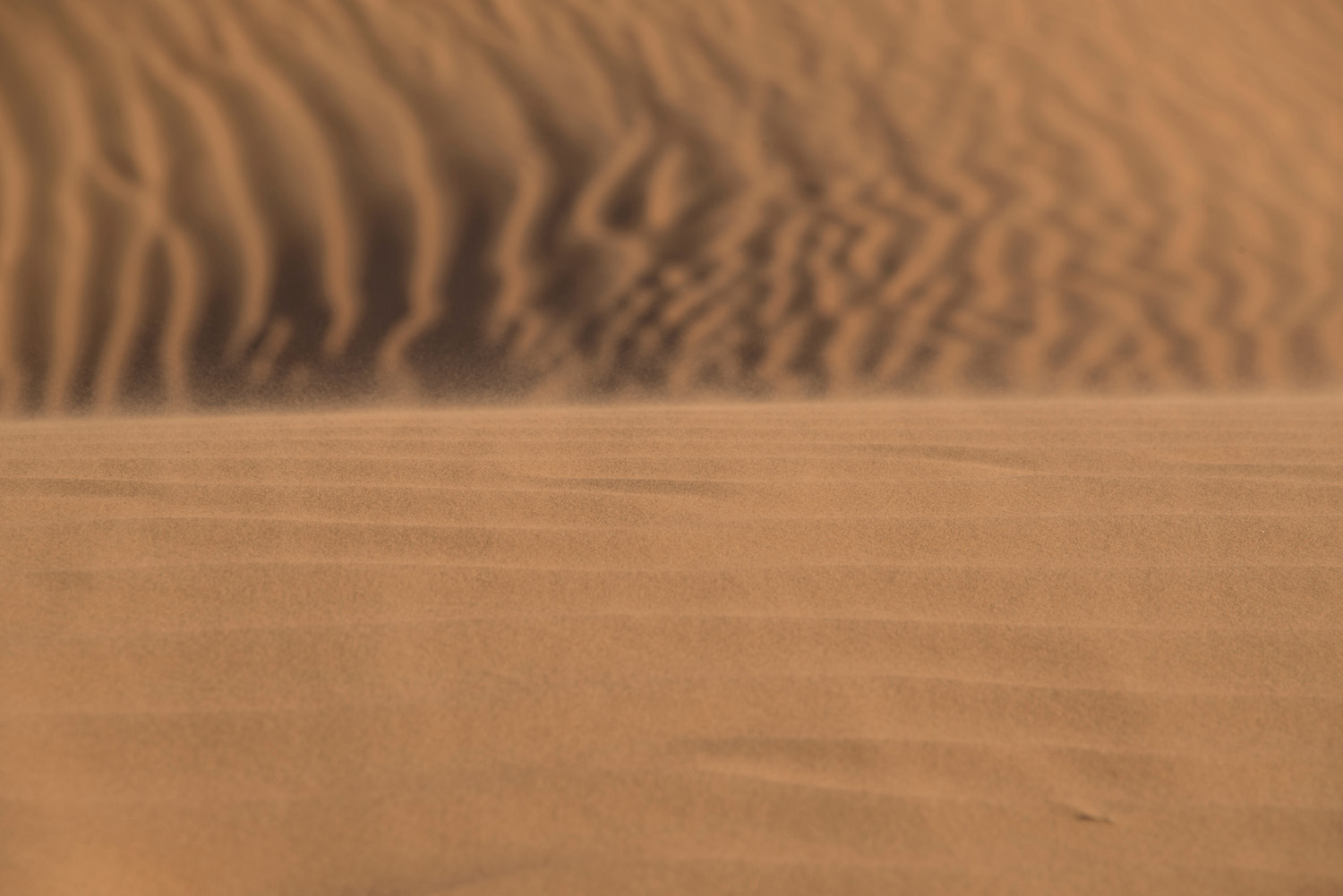 Certainly not just a few hours later, when I stood atop a mountain of sand waiting to watch whatever colors the sun might paint in the dusty sky as it descended. The entire ground seemed to move under my feet at the speed of light, yet there I was, almost ecstatic in my calmness, not unlike I had been 13 months earlier when I experienced the first earthquake of my adult life in Aomori, Japan.

The contrast of how violently the sand was being displaced with how minimally it impacted my body was striking. I couldn’t feel even a single grain of it, even though it swirled around my feet so vigorously it howled, not unlike the pack of strays in the plastic mists of Muscat days before. 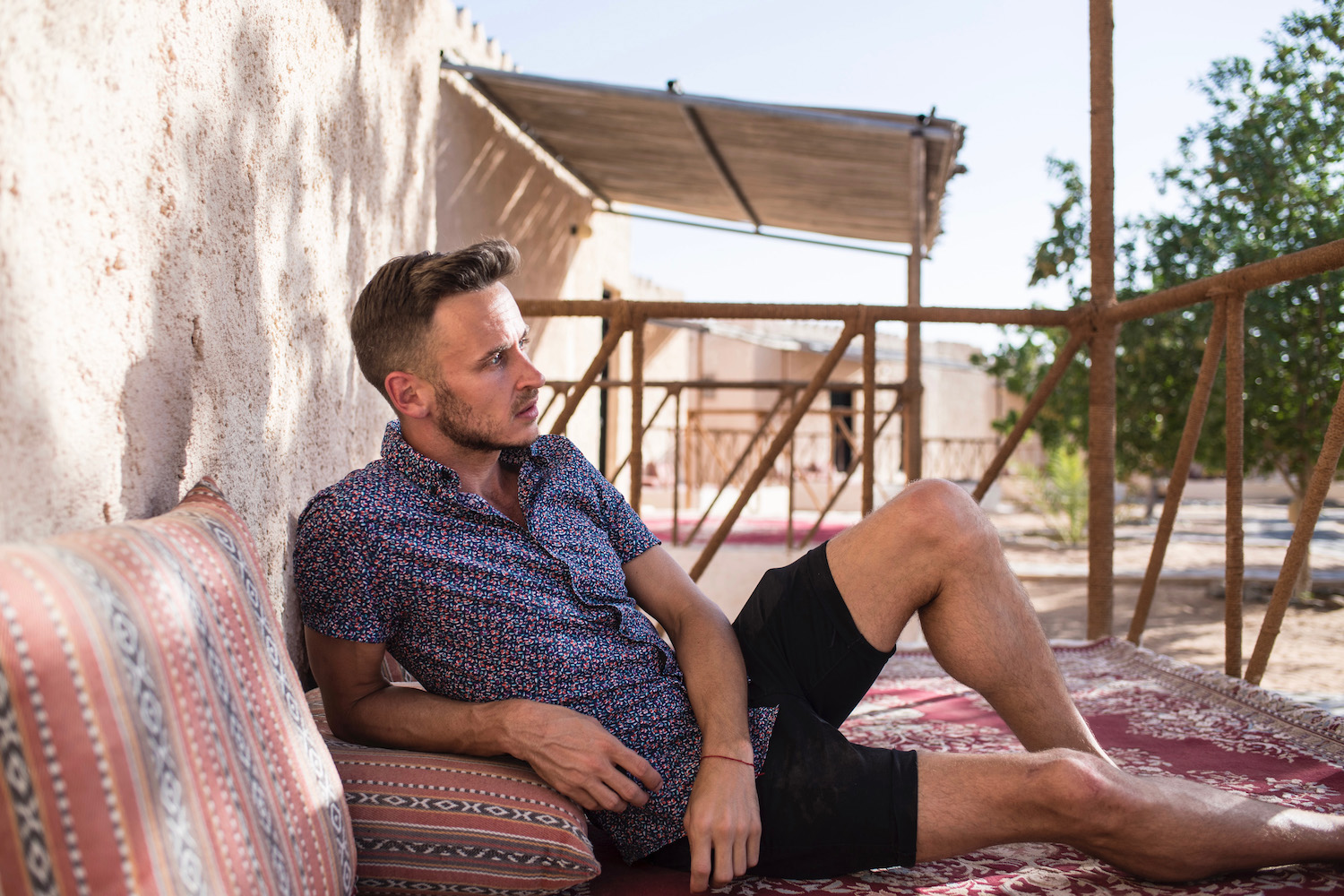 As I headed back to my mud-brick cabin, gliding down the side of the dune as quickly and as gracefully as if I were wearing skis, I realized that the sky glowed with precisely the same gradient the one in Austin often had when I lived there. Especially from the porch of the red bungalow on East 7th Street I called home in late 2014, when a sudden existential crisis inspired me to cancel what would’ve been my first trip to Oman.

If only I’d known then what I learned in the Empty Quarter: The secret to weathering a storm is standing in it unafraid.

Last Rains of the Khareef

The watermelon seller I passed on my way into Wahiba Sands certainly knew that. I’d made eye contact with the man, who I assume grew the handsome spheres of fruit himself, and like basically everyone I met during my week in Oman, he radiated a kindness so penetrating it made me want to cry—but not to stop.

To be sure, I spent the rest of my thousand or so kilometers at the wheel actively looking for another opportunity to support such a dedicated entrepreneur, but didn’t spot a single one en route to Oman’s former capital of Nizwa, or from Nizwa up to the Sultanate’s highest mountain Jebel Shams, or on my way back to Muscat, where I slept a second night before the final leg of my Oman trip began. 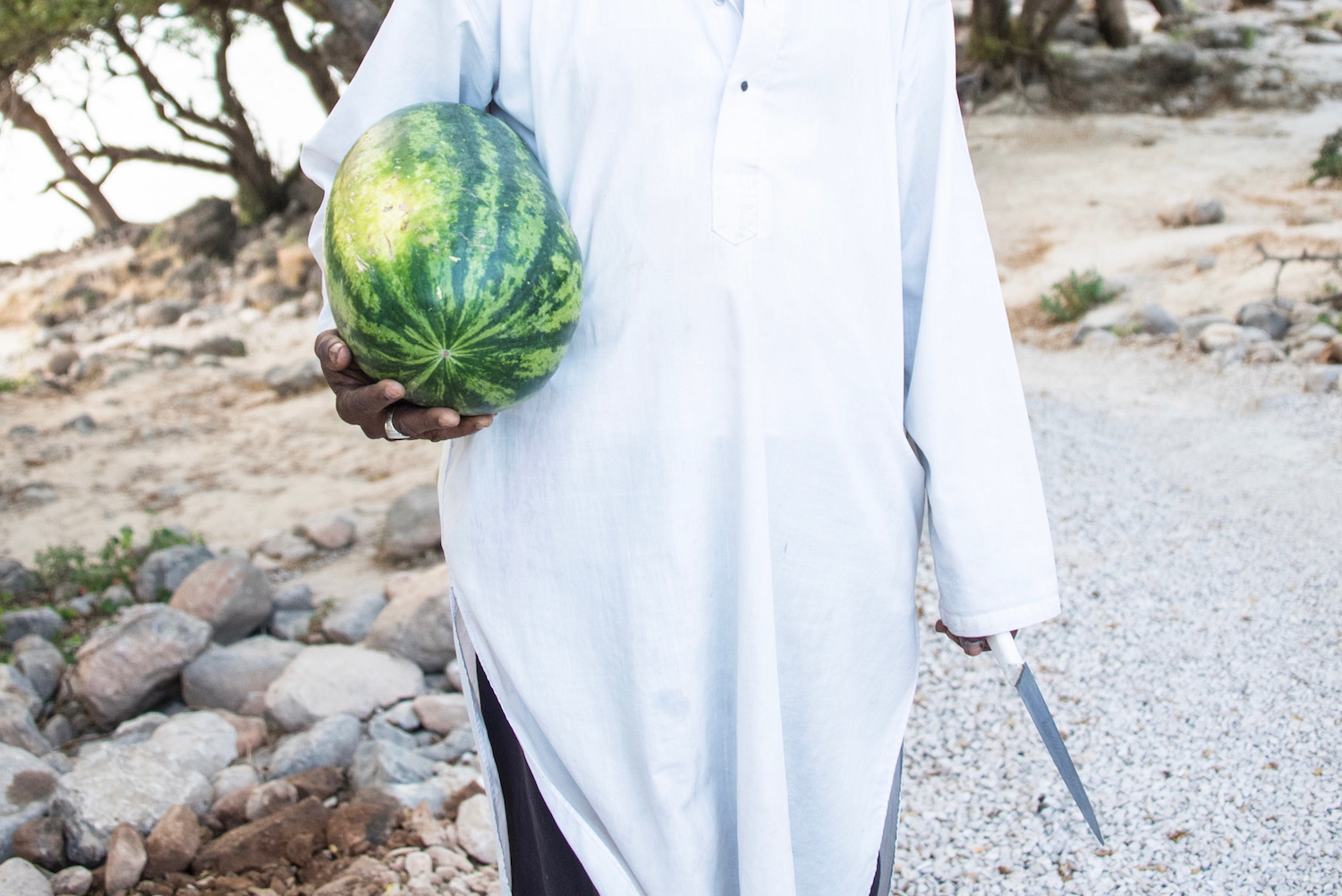 As it often is in life, it wasn’t until I stopped looking that I found what I needed.

A few hours after landing in Salalah, in far western Oman near the border with Yemen, I was driving into Wadi Darbat, which was still relatively green, in spite the months that had passed since the last rains of the Khareef monsoon.

I pulled off the road to photograph a waterfall, whose fierceness and mesmerizing blue-green color were apparently a better reason to stop than the potential for human connection, and only saw him out of the corner of my eye.

Unfortunately for the man, who lowered his asking price for the large melon from two to one rial without me even asking, I only had a 20—and he didn’t have change. But I planned to take a boat trip and hike deeper into the Wadi. 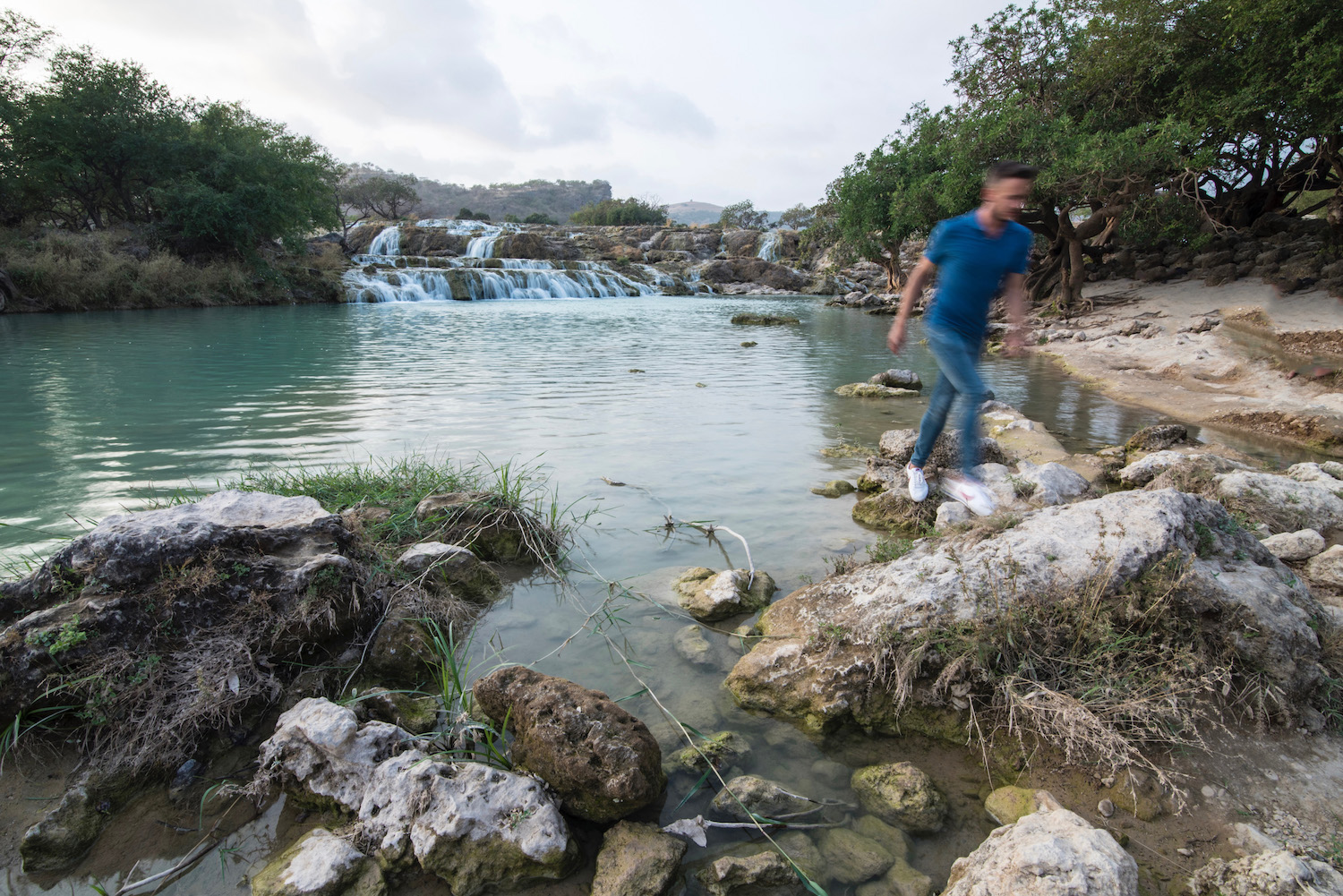 I didn’t bother trying to explain this to him (seemingly, he was a member of one of the non-Arab indigenous tribes of Oman’s Dhofar region, who certainly wouldn’t understand much English), but I did offer a simple reassurance.

“I will come back,” I declared, and he nodded as if to say he understood my promise.

If I’m honest, it was far from the most delicious watermelon I’d had in my life—it was probably among the worst I’ve eaten in recent memory. But as I cut into its rind with a knife I borrowed from the kitchen of my hotel in Salalah’s city center, and began to scoop the flesh out in large spoonfuls, I tasted the sweetness of every Omani person I spoke with, smoked with or simply smiled at through my car window.

The next morning—the last of my Oman trip—I traipsed through the frankincense forest at Wadi Dawkah, somewhat on edge from the early results of the US midterm elections, which seemed less encouraging than they would when all votes had been counted. The trees didn’t give off any scent (none of them were burning, thankfully), though it wasn’t lost on me that just days before, I’d been jogging through smoke that was likely carcinogenic.

What a different a week makes. Especially in a place—yes, a magical place—like Oman.

See other great reads about destinations in the Middle East.

Robert Schrader is a travel writer and photographer who's been roaming the world independently since 2005, writing for publications such as "CNNGo" and "Shanghaiist" along the way. His blog, Leave Your Daily Hell, provides a mix of travel advice, destination guides and personal essays covering the more esoteric aspects of life as a traveler.
Read More Share
Cruising to the Caribbean: 5 Islands To Add To Your List
Totes From Sea Bags are Made from Sails