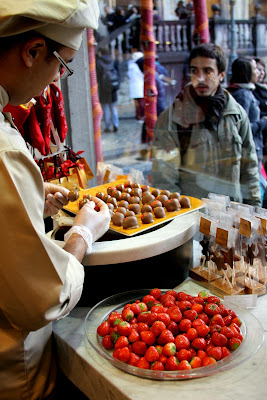 You’ve never had chocolate until you’ve had Belgian chocolate.When my original plans to stay in Paris fell through, my parents were kind enough to let me crash their mini vacation. After the 1 hour train ride from Paris to Brussels (seriously, why can’t he U.S. get high speed rail already?!) I made my way to their hotel–located right next to the European Parliament I might add. They were just waking up from their naps, having arrived a few hours earlier on their flight, so I took the opportunity to jump in the shower to feel a bit better about life.Once we were all properly bundled up, we began our adventure to explore Brussels. However, we didn’t get very far. What was the road block, you ask? A chocolate shop… Neuhaus to be exact. I tried a bit of marzipan, a chocolate dipped orange rind (fav) and bought a square of chocolate with speculoos for us all to sample. After my parents made their purchases we continued on our way.Over the next two days we wandered by the Royal Palace, walked past the Brussels Park, up to the Church fo Saint Jacques-sure-Coudenberg, perused the Christmas Market, witnessed the Manneken Pis not pissing, and into many chocolate shops along the way. In the Grote Markt alone there were 10 chocolate shops… Godiva, Leonidas, Guylian, Cote-d’Or, Bruyerre, Jacques, Dolfin, Galler, Marcolini and more. I tried bits of chocolate in each shop, bought a tin from Bruyerre, somehow resisted a cone of Godiva chocolate dipped strawberries for 5 euros (kicking myself for that) and enjoyed the random assortments of heavenly –non waxy– chocolate. I’m a bit sad I didn’t try Marcolini… my taxi driver to the airport said it’s the best. Ce’est la vie. However, I did stop (twice) for a Belgian waffle. Ends up, the U.S. is totally doing it wrong… it was amazing! Slightly crispy, warm and not overly sweet. I tried it once with just chocolate then the next time with nutella and strawberries; I prefer the latter but definitely would not turn down a freshly made real Belgian waffle any scrumptious topping. I recommend if you’re in the area you don’t either.
Melinda Skea

Melinda Skea got a taste for adventure as her family moved from America's West to its hospitable south and eventually settled in its fast-paced New England corner. She studied International Relations and Spanish at Brigham Young University and subsequently embarked on a round-the-world trip which included Asia, Oceania and Europe. She has since found a home base in Washington D.C. where she works as an editor for a non-profit publication, but still finds time to put a few stamps in her passport each year.

Melinda is also the founder of D.C.-based Fashion Freecycle, which strives to limit the growing problem of clothing pollution by making "One [wo]man's trash another [wo]man's treasure". These quarterly events encourage women to donate items and swap them for ones they find useful. Also an avid film lover, in 2008 Melinda began a monthly Foreign Film Night, which strives to create an atmosphere of openness, respect and learning as participants dine on the country-of-choice local cuisine and enjoy cinema outside of the usual Blockbuster.
Read More Share
Christopher Hitchens: Toll The Bell — The Wicked Hitch Is Dead
The Best Music Festivals in Australia That Will Offer A Smashing Fun Time