Happily back from a beautiful 9 days in the North of Spain, I have learned that I can speak a bit of Spanish, but not understand it, tapas make the best meal in the world, and every day should end with a beautiful glass of red wine. As a result, we ended up in the beautiful village of Sos Del Rey.  Situated in the mountains in Aragon in the north of Spain, it’s unlike anywhere I have ever been in my entire life. The North of Spain is often described as a window into old Spain, and that’s exactly what we found in Sos: 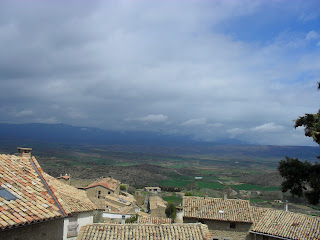 We arrived at the base of the medieval town during the siesta period – the town is on such a steep hill with such narrow twisty streets that all cars have to park at the bottom. We got out, and walked up and into the village. The entire experience was totally strange- clearly people were living here, but amongst the ruins and slate windows, we didn’t see a single sign of life. I guess everyone had closed up their shutters and gone for their daily nap.

We were in the town for a few hours, and didn’t see another living soul – just silence with massive buzzards wheeling overhead. 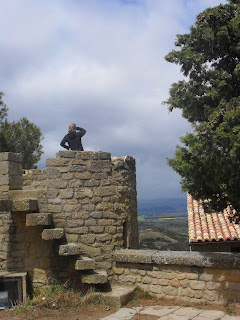 There was also a total lack of shops or commerce- usually no matter where you go, you’re kicking cigarette butts and see a couple signs for Coca Cola. Instead, we walked quietly up to the top of city, climbed some leftover castle turrets and had lunch.
Not a bad view: 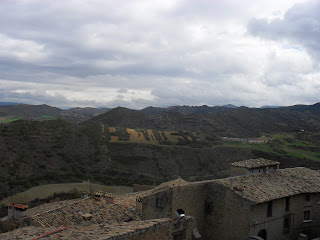 Talk about walking into another age. It seems time doesn’t really touch this village (minus some TV aerials going up).  I imagine it’s the same as when King Ferdinand II was born here (yes that king- the one who married Isabel, kicked out the muslims, funded Christopher Columbus and unified Spain).
So if you’re passing through Aragon – stop and stay a while. Enjoy the wheeling birds and windy turrets. Have some cheese and bread and soak in the silence.
Emma Wells

After living in America and New Zealand, Emma Wells moved to London where she began to cover life, work and travel in and around London on her blog On London Time. She shares advice for newcomers, travelers, and visitors alike. Beyond London, she writes about traveling on the cheap across Europe and around the world as well as food, books and tea.
Read More Share
Intel Capital Global Summit Invests in 10 Innovative Tech Companies
Seafood Watch for Ocean-Friendly Seafood & Sushi Throughout the US