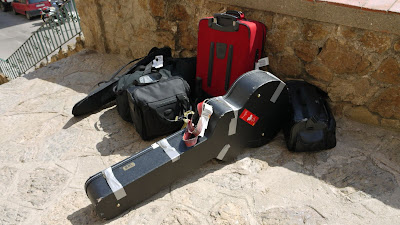 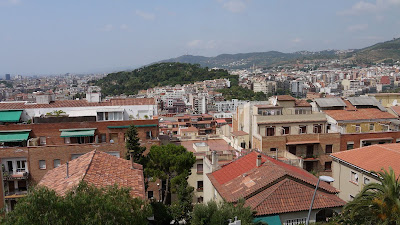 we made it to Barcelona and it’s amazing. Although, I have to say we did not arrive without a few small inconveniences…

I should have known, when we got on the plane and my seat was in the middle of, the middle of the plane. You know, the seat where no one wants to sit. My husband very graciously switched with me. He’s so sweet…

The plane took off and I decided to recline. Nope, it wouldn’t recline. I asked a flight attendant about it and soon all the flight attendants were helping. No one could figure out how to make this stupid seat go back and since my husband already switched with me for my comfort, I wasn’t about to make another peep. Our flight was over 9 hours.

So, needless to say, I did not sleep the whole flight, which isn’t entirely the end of the world, but it kind of sucks. It also did not help that the family, with 3 kids behind us did not shut up the entire way. I guess they didn’t sleep either, but at least, they did have reclining seats.

We got off the plane in Amsterdam and as we were going through security, I realized, I left my jacket on the plane. Ugh.. We had already gone through security so I could not go back and still make our next flight. We asked a friendly and helpful KLM woman, but no jacket to be found on our plane.. So.. I lost my jacket.. We went to our very crowded gate and waited. We ended up sitting on the air condition duct because there were no seats available and when we stood, my shirt got caught in the duct and it tore a huge hole in it. I thought, oh man, hopefully all this stuff only happens in 3’s… because 3 things already happened…

We finally made it to beautiful Barcelona.. Yay!! We arrived at noon on time. Then we went to baggage claim and it took over an hour to get all our items off the belt, it was sooooooo slow… Steven’s guitar was in the oversized things and it did not arrive so we had to wait in a very slow moving line at the lost baggage area. We waited and waited and waited. Finally, they told us his guitar arrived and they will send it up right away. So, we left our precious spot in line to go to the other side of the airport to pick up his guitar, which did not come. We walked back and waited in line again.. We ended up in this cycle 3 times before his guitar arrived, 4 hours after we had landed.

At this point we were both quite frustrated, we hadn’t slept, we hadn’t eaten and we had 7 pieces of luggage between the 2 of us including 2 guitars, camera equipment, our carry ons and one suitcase for our clothes. I suggested taking a taxi to our destination, but Steven did not want to do this, he wanted to take the train. I pretty much had a conniption fit, but followed him to the bus (carrying 5 things). He carrying 2 50lb bags. Then, we got off the bus and had to walk 20 minutes to the train, by the time we got there, I was about to kill someone. We got on the train with all our shit and realized we had to transfer. I said to him. There is no way, I am schlepping this stuff any further, we are taking a taxi. So, we took the train a little further. We got off and had to carry it another 10 minutes. We found a taxi, got in and ahhhh…. relaxation.

We made it to the place we are staying, which is so cool. We are renting a room in someones flat. We found it using this website. www.airbnb.com. It’s a new trend in traveling and it is so cool. The NYT just did an article about this type of thing here.

Since we had taken forever to get there, the lady at the place we are staying had gone off, which I would have done too. We had our taxi driver call her. She came back in about 20 minutes. and voila… We made it!!

I was still about to kill someone, but at least we made it safely. And our flat over looks the whole city. It’s beautiful and amazing! And I am such a lucky girl to be here..

Samia Shalabi is a Seattle based artist & designer, yogi and traveler who has roots in the Middle-East, was raised in the middle-west and is drawn to India. She has a degree in geology, has traveled all over the world with a backpack, and believes in following her dreams. Samia does yoga most mornings, enjoys walks around Seattle, loves to laugh, and daydreams about where to travel next. She is working on a movie shoot in France.
Read More Share
Mysteries of VDNKH
Living Climate Change