One of the strangest foods I have surely eaten was on a cross-country trip from the Republic of Georgia’s Kakheti wine region to its capital city of Tbilisi.

Having spent the day visiting the village of Sighnaghi (Signagi) and its surrounding villages and stunning cathedrals, it was late afternoon by the time we got on the road and started heading back to Tbilisi.

As we passed through small villages and communities, I noticed small groups of women hanging out on the sides of the road next to metal stands adorned with dozens of long candle-shaped objects swaying from twine. I asked our driver what the women were selling, and he said that they were selling a traditional type of Georgian candy.

Churchkhela is a popular food in this area, and it combines two favorite Georgian ingredients – grapes and nuts. These long strings of dried nuts get their strange appearance from being repeatedly dipped in a thick, boiling mixture of fresh grape juice and wheat flour.

Almonds, hazel nuts, walnuts, and even raisins are used in churchkhela recipes. The result is a healthy and delicious snack that locals commonly refer to as Georgian Snickers bars.

A popular snack in Russia, Greece, Cyprus and Turkey, churchkhela is sold throughout Georgia. The best churchkhela in Georgia is made in the Kakheti region, which is famous for its wine and vineyards. You can find churchkhela throughout Georgia, but if you’re only stopping for a visit in Tbilisi; the best place to buy it is along Kote Abkhazi Street.

I purchased a few churchkhela for my last few days in the Republic of Georgia, and they were quite tasty. The sweet flavor of the concentrated grape juice complimented the taste of the nuts. I learned later that week that many people consider churchkhela to be a great portable snack. Interestingly enough, Georgian warriors used to carry churchkhela with them while they were at war because they provide energy and strength. They’re basically the Georgian equivalent of an energy bar.

What do you think? Would you try churchkhela? 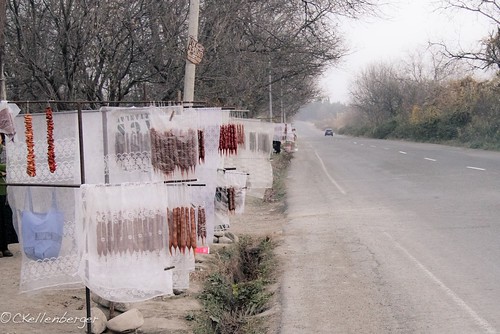 Her photography and travel articles have appeared in both print and online publications around the world, including Travel and Leisure Asia, Unearthing Asia and Hip Compass Escapes.
Read More Share
Grand Canyon Meditation and Beyond….
Sunsets at Nicaragua's San Juan del Sur

One Response to Eastern Europe for Foodies: Georgian Snickers Bar aka Churchkhela