It was a decade ago, maybe more, and I was huddled around a certain Austin, Texas picnic table with two women I’d one day count among my closest friends. But at this point I’d known each of them a year, maybe less, so I often felt unsure what to make of our interactions.

“You mean 33?” I clarified, when the older of the two told me which birthday she’d be celebrating the following week.

The creatures who made their homes in the cedar and Chinaberry trees that lined the lakefront were conducting their end-of-day conversations raucously, the sky above us fading from tangerine to violet to navy, so I assumed I’d heard a number instead of what it seemed she actually said. “No,” she confirmed my suspicions, “Thirty-free. I’m going to be thirty-free!”

She proceeded to provide an explanation that the other woman, who was close to 30 years of age herself, understood more viscerally than I did.

A similar sort of scene played out last Friday night on Ao Yai (Long Beach) on the Thai island of Koh Phayam. Only this time, I was the one about to enter the last year of his early 30’s, both of the two men flanking me on either side a few years shy of the big 3-0. But the sky was more or less the same as it had been back in Texas, the song of the hornbills and kingfishers and sea eagles analogous, at least, to the one the birds in Austin had sung.

Or at least I imagine it was, under the dozen consecutive Jack Johnson tunes that droned on as we tore through a dozen margaritas, the only smell stronger than the B.O. coming from the dreadlocked white people surrounding us on all sides the dank-ass weed they were smoking.

Just then, my phone lit up. It was Ariel, an Argentine traveler I’d met shortly after moving to Bangkok and with whom I’d kept in touch. What do you think of Koh Phayam? He wrote, as if he expected me to vent.

Instead, I restrained myself. It’s different, that’s for sure, I replied, punctuating my words with a funny emoji. It was Ariel, after all, who’d recommended that I make Phayam a top priority on my Thai island bucket list. Besides, I didn’t want a head full of cynical thoughts to ruin mine and my friends’ evening.

(The margaritas and second-hand smoke would do that all on their own in due time.)

I wanted to tell Ariel about the hippie bros and their hippie-bro music and, after explaining how we’d arrived on the island to find out the hotel we booked backed up to a drainage ditch, describe how I felt when I first laid eyes on Ao Yai (“Koh Phayam’s best beach”), where pines outnumber palms by a factor of ten to one, and whose water as murky as the sand is marred by debris.

“Certainly,” my friend Scott said, after we arrived back at Long Beach the next morning and saw it under full sunlight for the first time, “it doesn’t look like an Andaman Sea beach.” Matthew shook his head in agreement.

I was about to add something catty, or at least to point out how shocking what we saw before us was given our proximity to Myanmar’s paradisiacal Mergui Archipelago, but Kamishia’s words entered my mind suddenly. Was I really going to sacrifice achieving a state of “thirty-free” because I’d chosen an imperfect island for my 33rd birthday weekend? 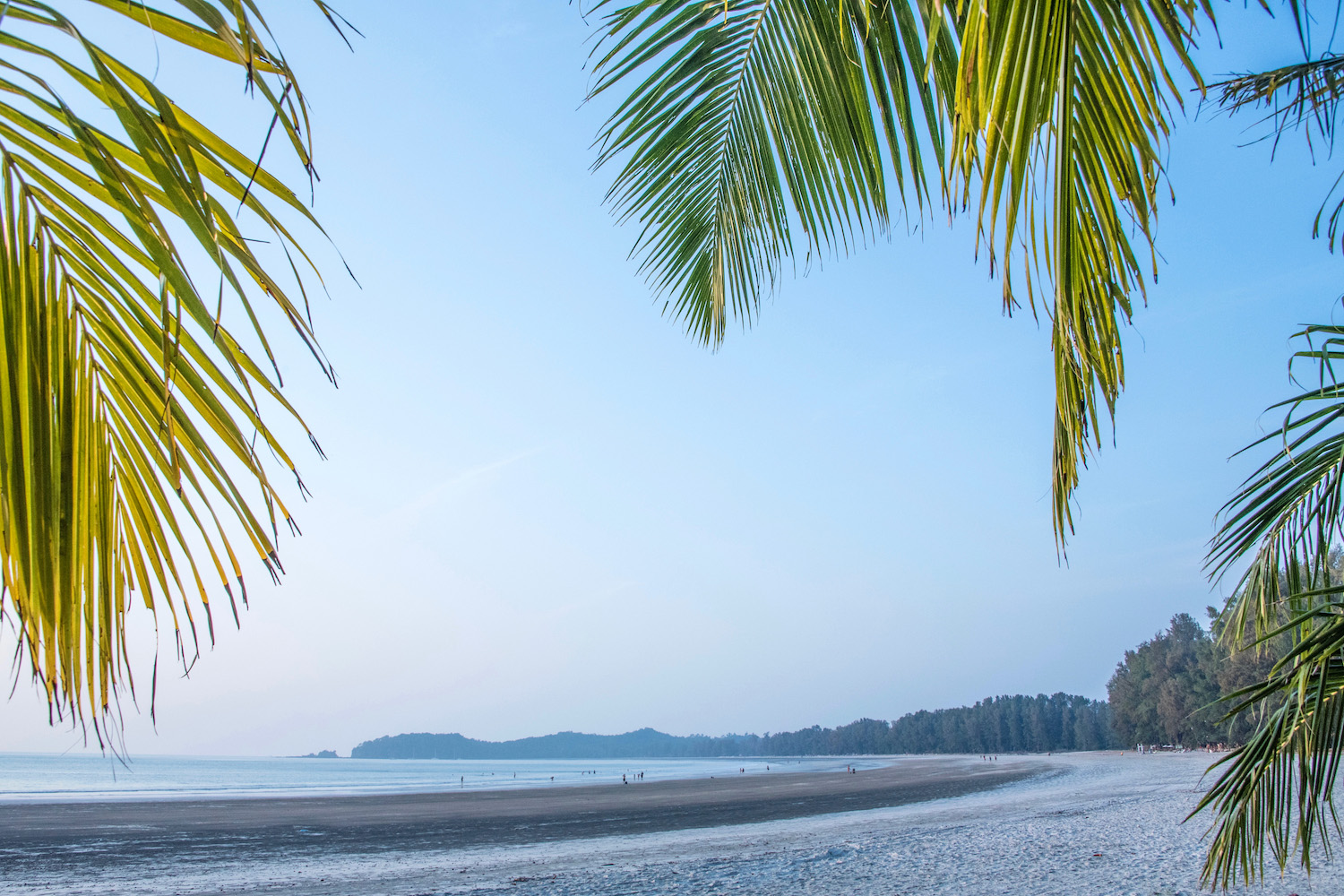 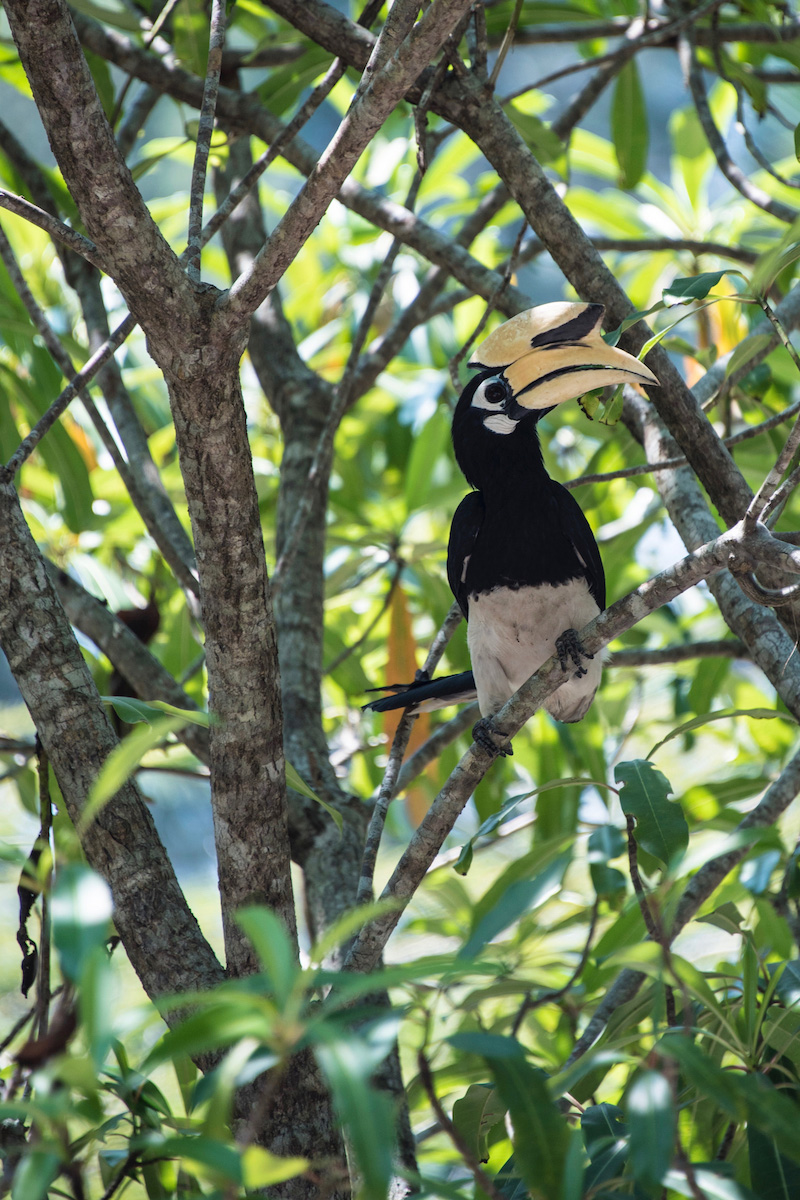 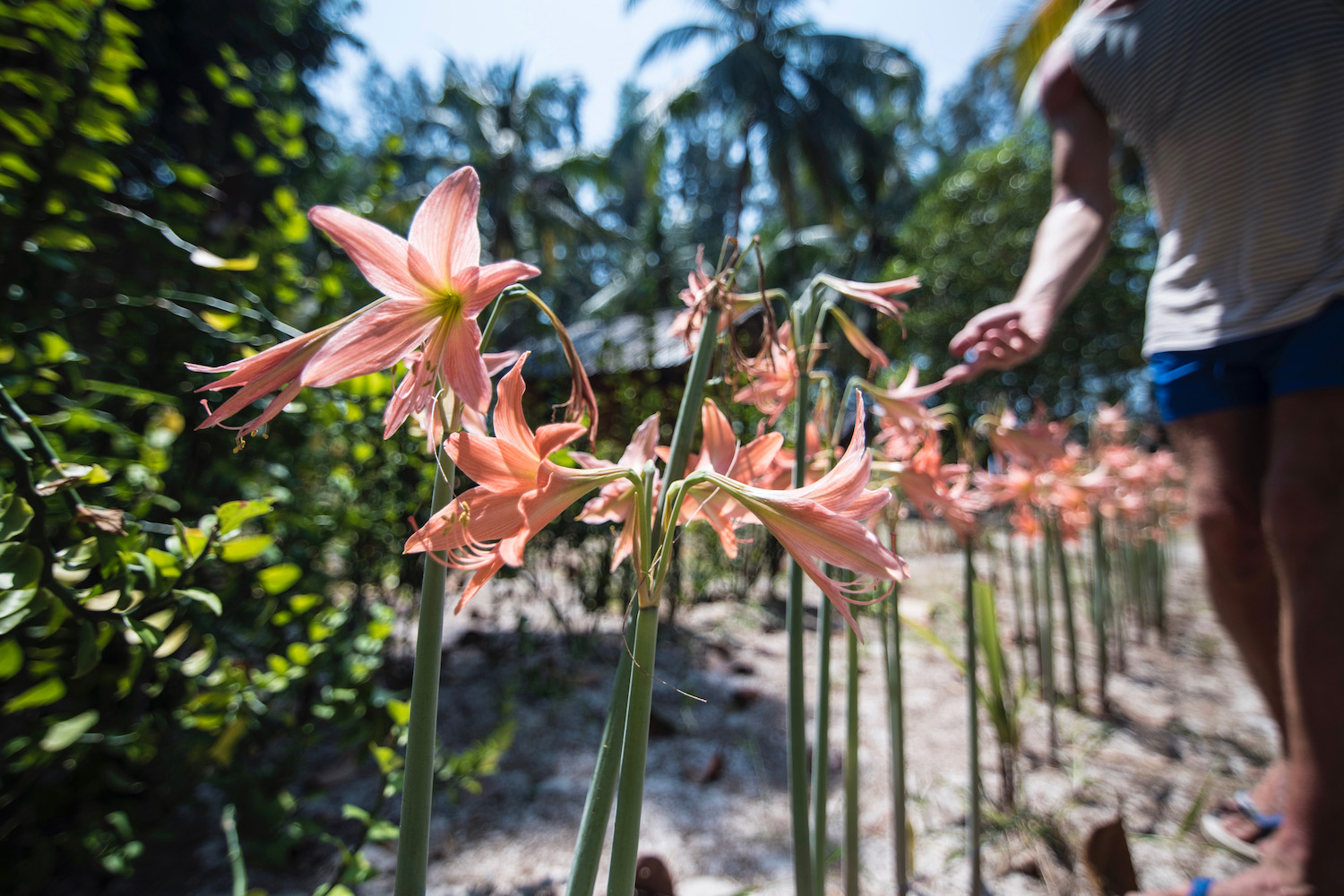 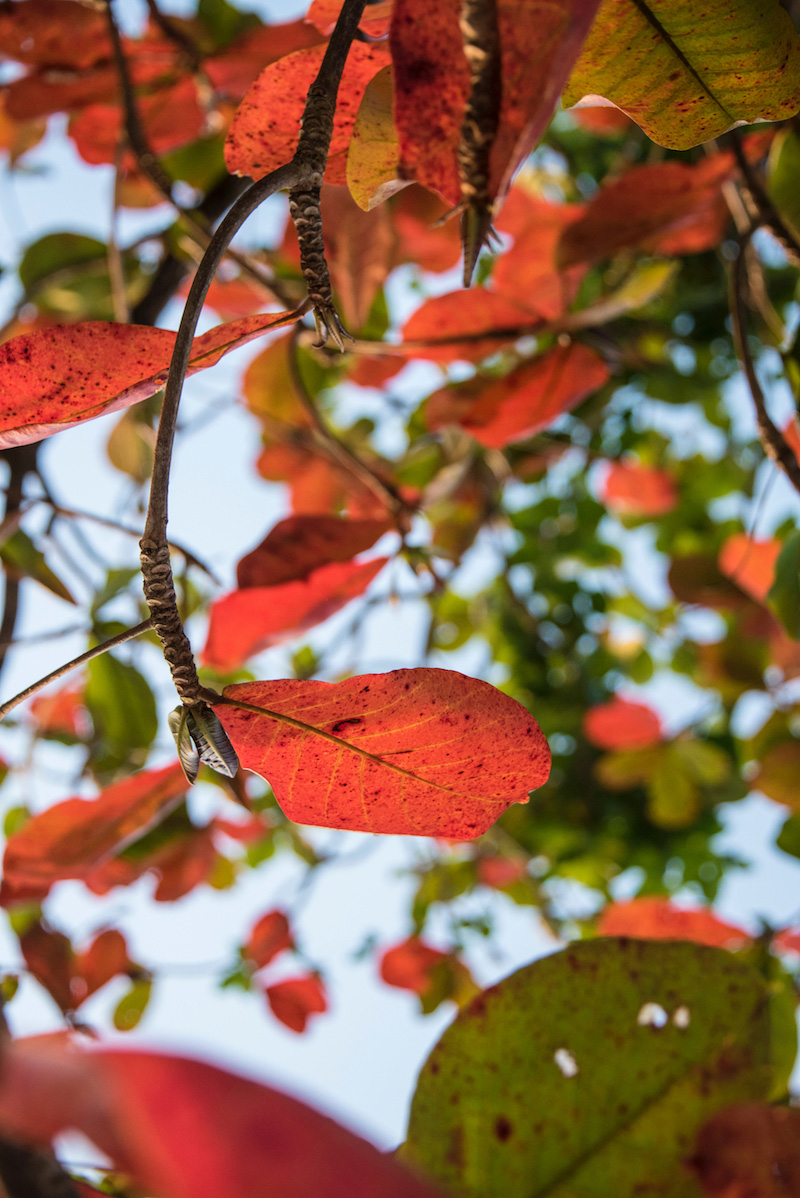 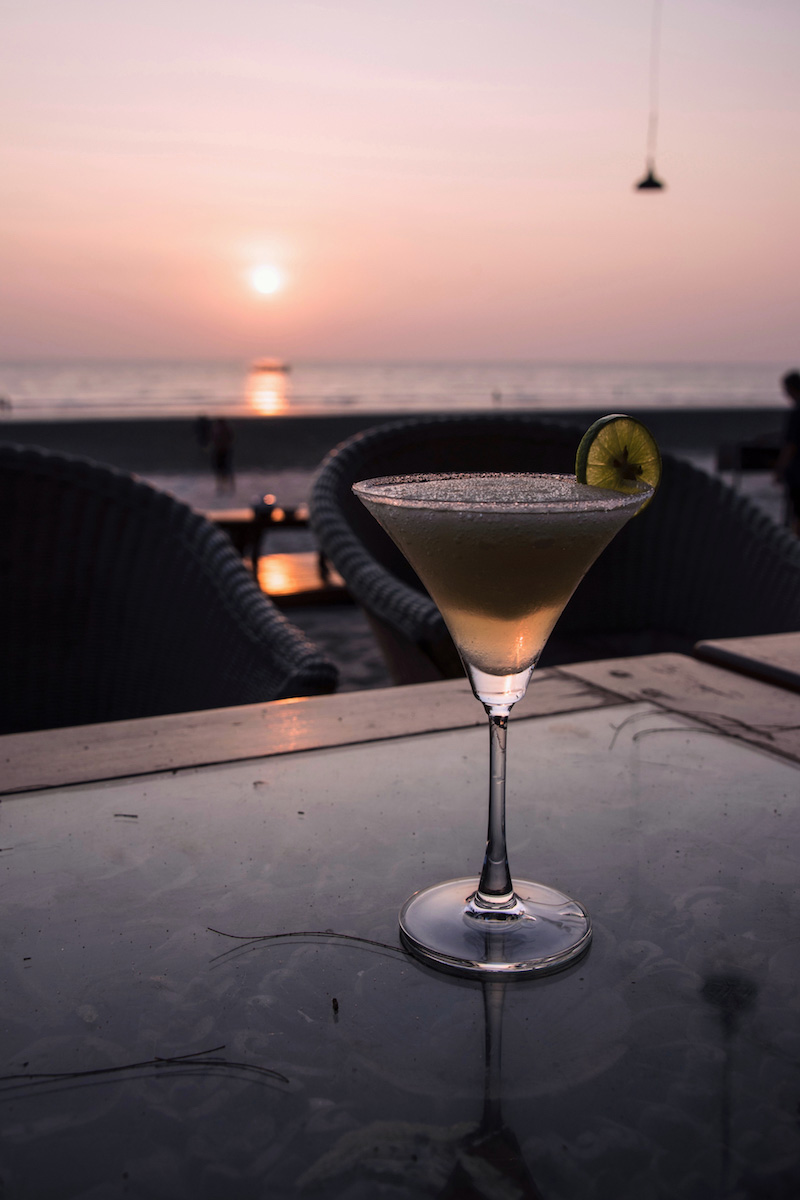 As morning brightened to afternoon, whose sky lit up with cotton-candy tones as dusk and then twilight arrived on the scene, I tried to focus less on the fact Ao Yai this was a poor man’s version of India’s Palolem, and more on what a rich life I’d built for myself since I first visited Goa, not long after my fateful audience with Gina and Kamishia.

It was true, for example, that bougainvilleas were in as short a supply on Phayam as palms were, compared to Palolem and as a matter of objective fact; and that I didn’t recognize any of the brand names on the bottles of alcohol with which my Cuba libres and white Russians were being made.

And it was remarkable that I was able to spend three days on a tropical-ish island at almost no fiscal or logistical inconvenience to myself or the people I brought with me, to say nothing of the enchanting Amaryllis belladonna that made their home in the shadows where the towering pines shed their needles.

Or how lucky I was to be knocking on my mid-thirties at all: As Matthew, Scott and I wasted away, again, in Margaritaville, we learned that more than a dozen Florida high schoolers had lost their lives as a result of my home country’s idiotic gun laws.

I woke up this morning to the saxophone riff from “Careless Whisper,” which just so happened to be the #1 single on the US Billboard single chart exactly 33 years earlier, the day I opened my eyes for the first time. As I basked in the serendipity of the moment, my phone lit up as it had the night before last, and with another notification from Ariel.

Yes, I wrote to him, I am enjoying myself more today, and forced myself to list a dozen things I loved about Koh Phayam.

I’ve been 33 for almost a full day now, and while I believe I’m making good progress toward thirty-free, I think it’s better to paint pictures than draw conclusions at this point. I can’t go and waste this chance that I’ve been given, lest I find myself subject to the same dancing ban as dearly departed George.

Robert Schrader is a travel writer and photographer who's been roaming the world independently since 2005, writing for publications such as "CNNGo" and "Shanghaiist" along the way. His blog, Leave Your Daily Hell, provides a mix of travel advice, destination guides and personal essays covering the more esoteric aspects of life as a traveler.
Read More Share
Nico’s 1508 in Berkeley Makes a Great Brunch Spot
Fun, Funky & Chic Reading Glasses in Multiple Colors