Just when you tell yourself it has no more surprises up its eat-street, Delhi directs your smugness towards yet another delish delight. This time, it was  an unpretentious kiosk parked on a sidewalk near the Sundar Nagar Market, that simply called itself Kamal’s. At first attempt, we arrived at closing time (10.30 pm) and were shooed away; no amount of beseeching, cajoling or threats (hunger does have a way with reason) worked. Even as we sulked and skulked away, we knew we would return to partake another day. A buzzing  full house (car-tops and tables on the pavement), and swiftly emptying vessels stood testimony to the popularity of its pure vegetarian grub. 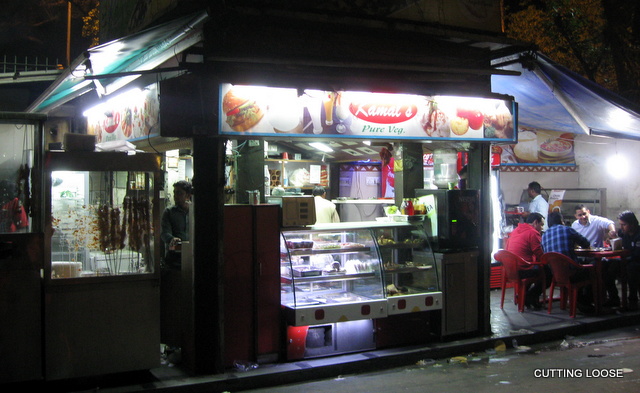 The next time, we arrived early and found ourselves a vantage parking spot. No sooner, a youngster ran up to take our order, which also arrived after a palatable wait. A plateful of creamy paneer tikkas, specialty of the house, was wolfed down before we attacked a sumptuous tandoori platter. Never, and I repeat, never before have I relished tandoori cauliflower and mushroom tikkas as I greedily did that night, from the cramped insides of a car bursting with hungry people.

The main course was a mushroom-peas sabzi and ‘yellow’ dal accompanied by blistering hot tandoori rotis, alongside a symphony of Munching Moments!  I noticed kadhi was a hot favourite, too, as were all manner of paneer preparations. But if you were to ask me, I’d say their tandoori platter is undoubtedly the piece de resistance. Fresh preparations, excellent flavouring and cooked to perfection. A must dining experience.

When she is not travelling, she is writing about it. Over the past decade or so, she has created an impressive writing repertoire for herself: as a columnist with Hindustan Times, as a book reviewer for The Tribune and as a contributor to travel magazines in India and overseas. Her work-in-progress, the documenting of colonial heritage along the Old Hindustan-Tibet Road, is an outcome of her long-standing romance with the Himalayas.
Read More Share
It’s (Horror) Show House Day in Struisbaai South Africa
Bahamas’ Breathtaking Simon’s Point For Water & Sky