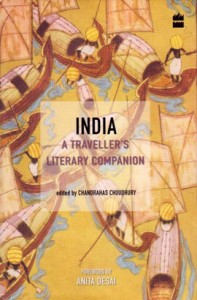 According to conventional wisdom, books (even as you write them) have a tendency to take on a life of their own. A shape of their own; an agenda of their own. Anthologies are no different. To start with, a brilliant, albeit somewhat obvious, idea takes root. Contributions are invited, perused, slaughtered, rejected before the chosen few make their way into the final selection. A selection that may eventually have no obvious connection to its original raison d’etre. India: A Traveller’s Literary Companion, edited by novelist and literary critic Chandrahas Choudhury, is just such an anthology. This latest collection of short fiction presents some good writing in English as well as translations of regional gems. What is difficult to fathom is good reason to club these 13 stories all together for a traveller’s benefit.

Anita Desai, in her “Forward”, prepares readers for a mixed literary bag, one that will take you on a journey through countless Indias. To wit, “These stories `85 are a kaleidoscope of the traditional and modern, the urban and rural, the wealthy and impoverished — a revealing glimpse into the many Indias encompassed by that fathomless word ‘India’”. That journey never quite begins. Nothing connects these stories. There is no common thread sewing them together except that somewhere in the literary recesses, the backdrop of the Indian landscape lurks. Which tiny detail, were we to allow ourselves to forget for just a moment, will surprise you by vanishing completely, revealing the universal nature of most of the select fiction.

The book has been divided into sections based on the four cardinal directions, in order to, it appears, slot geographical settings within the stories as well as represent regional writing. The magical realism of the happenings in The Prophet’s Hair by Salman Rushdie is based around a real incident that transpired in Kashmir. Qurratullain Hyder’s The Sound of Falling Leaves set in the pre-Partition Delhi and Lahore beautifully reflects the values of those times. While The Scent of Orange Blossoms by Mamang Dai portrays a capable woman of today enjoying the status and respect bestowed upon her in Arunachal Pradesh. Kunal Basu’s The Accountant transports you to the time when the Taj Mahal was being built while the Asura Pond by Fakir Mohan Senapati simply describes life around a village pond.

The stories are a diverse lot with a different point of origin, language and time period, spanning the turn of the 19th century to a more recent vintage. Of these, only six have been written in English and the rest are (mostly) excellent and highly readable translations from Indian languages. Without doubt, this selection reflects Choudhury’s profound interest in, and knowledge of, regional writing. He says as much in his “Preface” that he hopes to arouse in his readers “the desire for a more sustained encounter with writers whose work is every bit as good as their better-known counterparts in English.” From a reader’s point of view, I readily endorse this conviction. From an inveterate traveller’s point of view, the jury is still out on this one.

NOTE: This review appeared in The Tribune recently.

When she is not travelling, she is writing about it. Over the past decade or so, she has created an impressive writing repertoire for herself: as a columnist with Hindustan Times, as a book reviewer for The Tribune and as a contributor to travel magazines in India and overseas. Her work-in-progress, the documenting of colonial heritage along the Old Hindustan-Tibet Road, is an outcome of her long-standing romance with the Himalayas.
Read More Share
A Personal Tour of Bombed Beirut
Climate Crisis on our Plates