China is somewhat poorly known outside of Beijing and Shanghai, but attractions like the Gansu China rainbow mountains and the “first pier” of the Great Wall have put more remote regions of the country on our collective travel map.

Whether you come to China’s so-called Wild West to see geological formations and cultural relics, or simply to discover Gansu cuisine (which makes up for its relatively low profile with sky-high flavors), this Gansu travel guide will help you plan your trip. Which of these Gansu attractions most makes you want to book your flight? Where to Stay in Gansu

Whether you come to see the aforementioned Gansu Great Wall or stick to more easily accessible reaches of the province, lower your hotel expectations. While the quality and availability of accommodation in many secondary and tertiary Chinese destinations has skyrocketed in recent years, the wave has not yet reached Gansu.

From a guest house in Lanzhou that told me they “don’t accept foreigners” (in spite of the fact that I had a confirmed reservation), to a “budget single room” in Jiayuguan that ended up being a capsule, you’re unlikely to get more than a good night’s sleep during your stay in Gansu.

One of the main reasons I chose to visit Gansu when I did is that I was seeking an alternative to Tibet—I wanted to enjoy the Buddhist culture and architecture of the controversial region without being followed around by a Han Chinese guide. 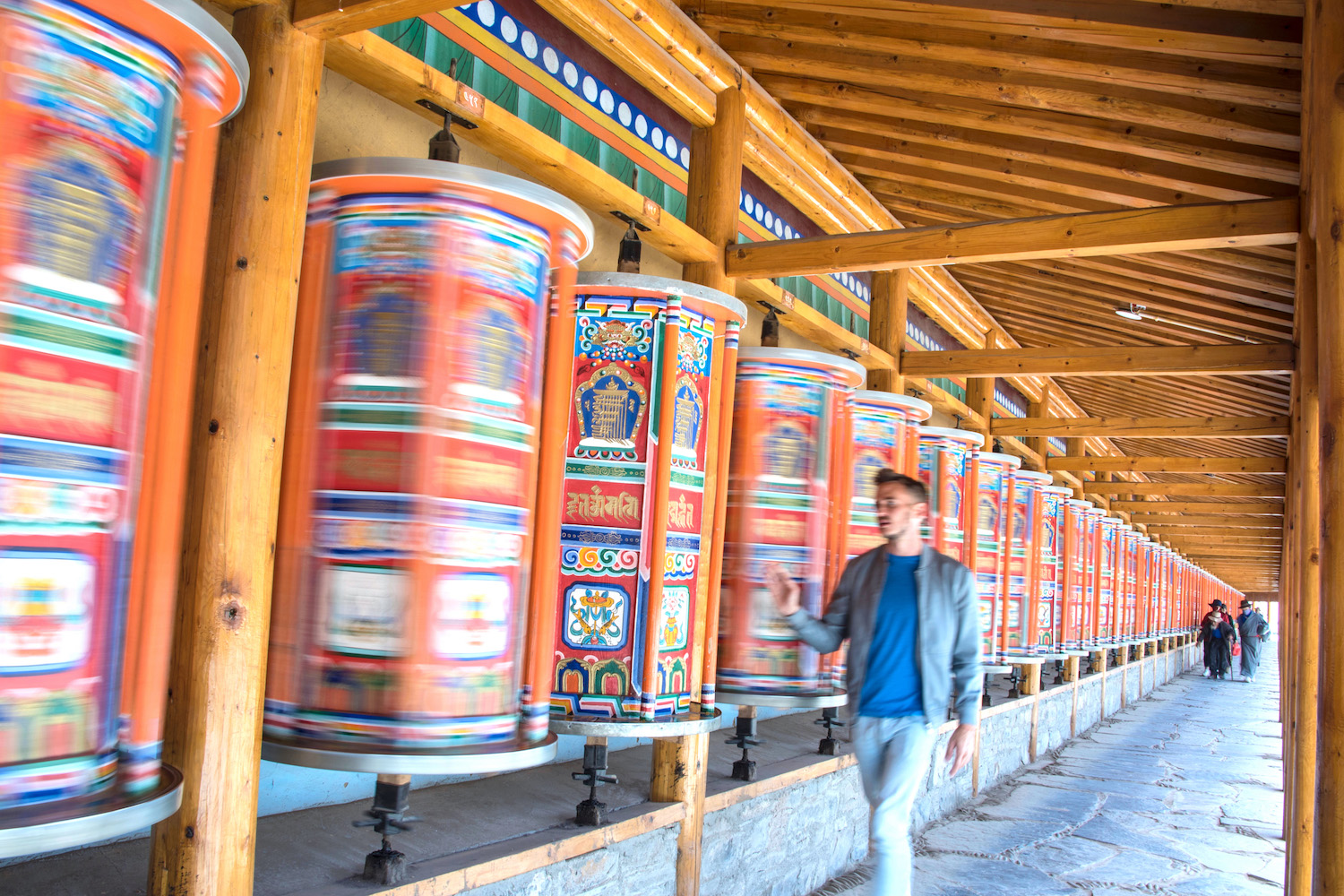 While Labrang Monastery, located in the town of Xiahe, is definitely not the Potala Palace, its proximity to Lanzhou (where you’ll likely be starting your Gansu trip) makes coming here a no brainer.

The Saving Grace of Lanzhou

Although it’s the capital of Gansu, Lanzhou provides a poor first impression of the province (which is part of why I’ve listed it second!). You’ll probably have to spend at least one night here, however, and pass through the city on a few subsequent occasions, so make the most of it by slurping down a few bowls of niu rou mian beef noodle soup. 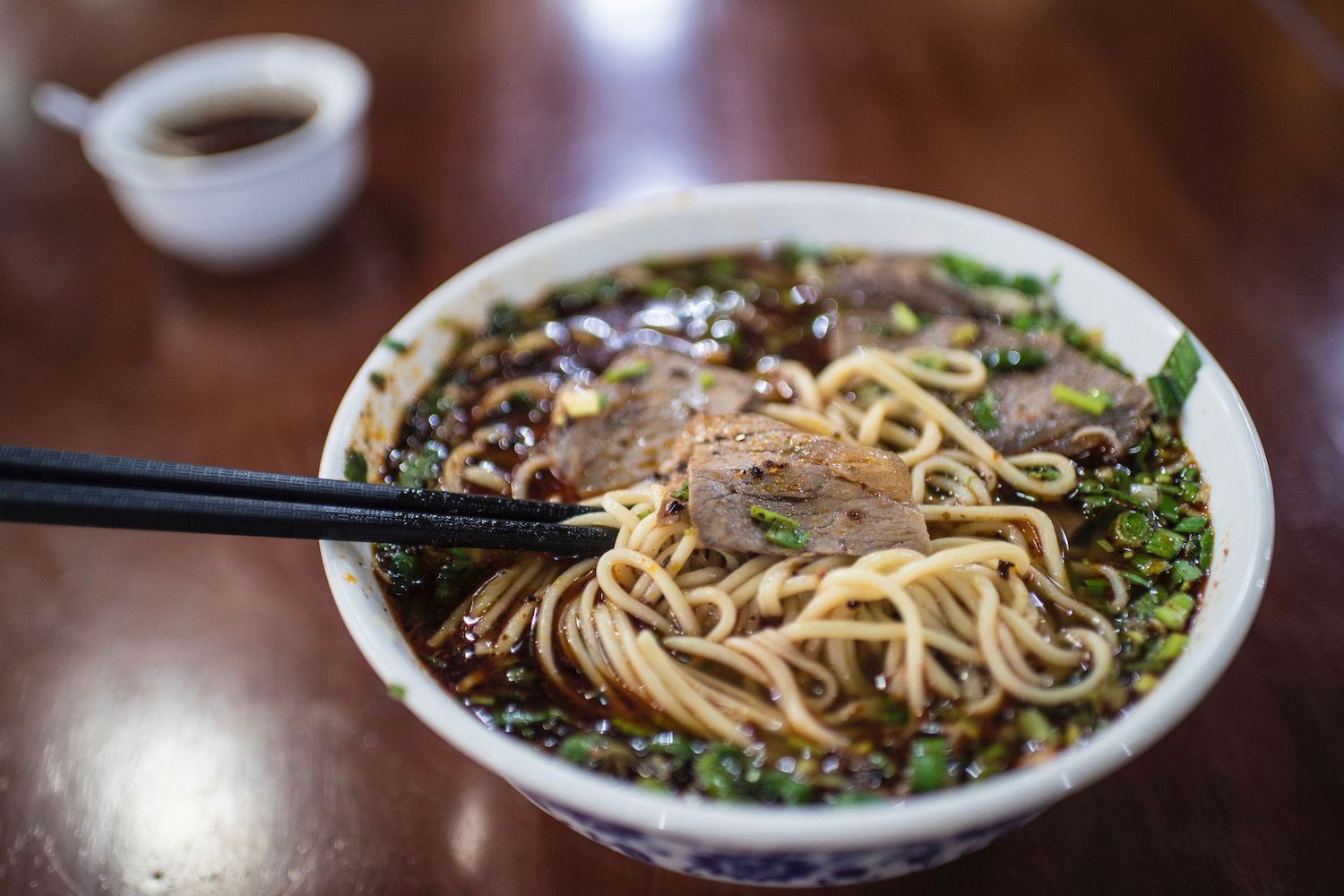 Served up by Chinese Muslims who hail from the nearby city of Linxia, this dish is delicious enough to make up for the dystopian nightmare that is the Lanzhou cityscape, and its preparation is a joy to watch as well.

I didn’t expect much of Zhangye Gansu, other than a relatively modern gateway to the Danxia Landform, a.k.a. the “Rainbow Mountains” of China. In fact, I ended up enjoying the city more than any others in Gansu, thanks both to attractions such as Da Fo Si (the “big” Buddha temple whose name is definitely not a joke) and its overall energy. 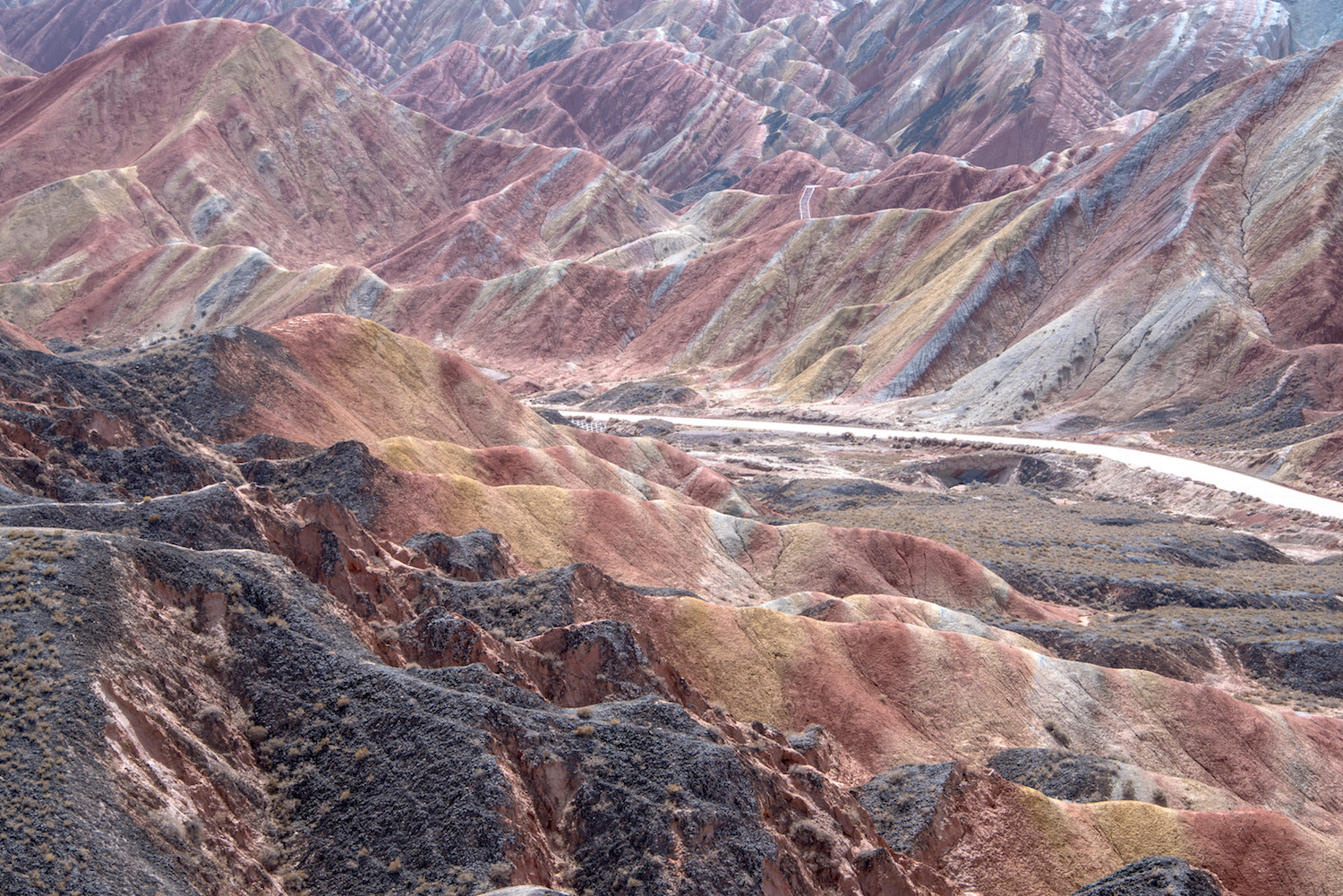 A piece of advice, if you come to Zhangye. While Danxia Landform is an absolutely must-visit, you should make sure not to skip Matisi, either. Cliff-hewn grottoes that date back to the reign of Tibetan king Gesar, these were a highlight of my entire Gansu trip (and more enjoyable than the more famous Mogao Caves, which I’ll talk about in a moment).

Where the Great Wall Begins

On paper, Jiayuguan is perhaps the most worthwhile place in Gansu to visit, with three separate places that claim to be the furthest west section of the Great Wall in close proximity to the city center. But while I found one of these (Jiayu Pass) very enjoyable, the city disappointed me overall. In particular I disliked the Wei Jin Tombs, which had a ridiculous “no photo” policy that made the 25 km journey from town completely pointless. 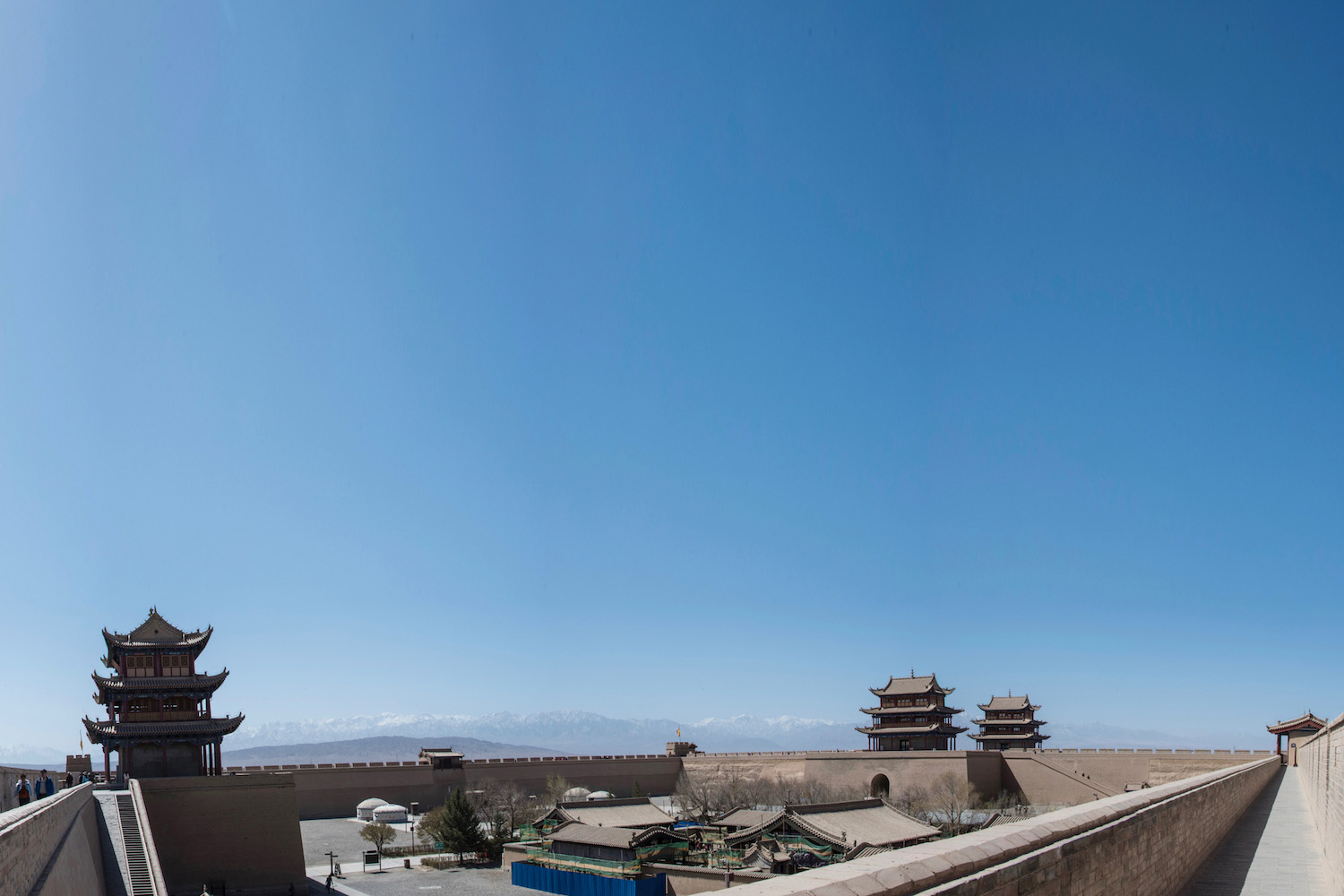 With this being said, Jiayuguan is more or less on the way from Zhangye to Dunhuang (which more than lives up to the hype, as I’m about to describe in greater detail), and since train schedules will probably necessitate it anyway, you might as well stop here for a night.

I mentioned Mogao Caves when I was discussing Matisi a few paragraphs up, and I’d like to create further distinction between the two. Namely, that while the Mogao Caves are larger and better know (and were more significant due to their location along the ancient Silk Road), I found them highly disappointing for a few particular reasons. 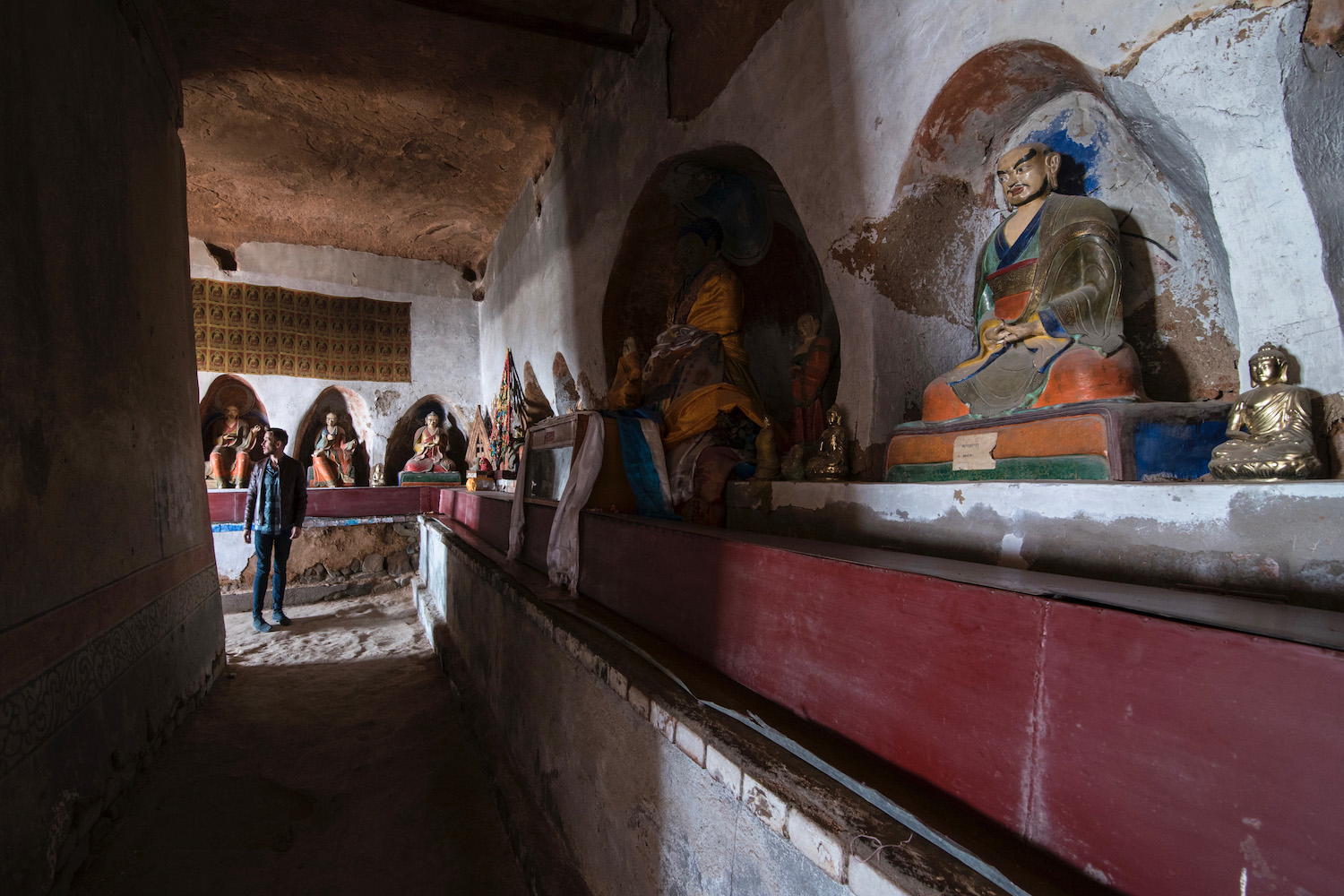 First among them: A “no photo” policy in the vein of Wei Jin Tombs, but much more strictly enforced (though I did manage to sneak a couple pictures). Secondly, your entire visit to the Caves is organized as a group tour—you’ll need to board a huge bus as the processing center near town, and you’re not technically allowed to stray from your guide (though I bent the rules in this regard as well). Definitely an attraction that’s presented with an exclusively Chinese audience in mind!

Pagoda of the Dunes

Along with the desire to have a somewhat Tibetan experience, an image from the town of Dunhuang (specifically, a pagoda amid sand dunes) was what inspired me to visit Gansu. I’m pleased to report that this pagoda (which sits along the so-called “Crescent” Lake at the base of Mingshan Mountain, at the entrance to the Gobi Desert) lived up to my expectations, though I had to be creative about the vantage point from which I photographed it in order to obscure the huge crowds passing through it. 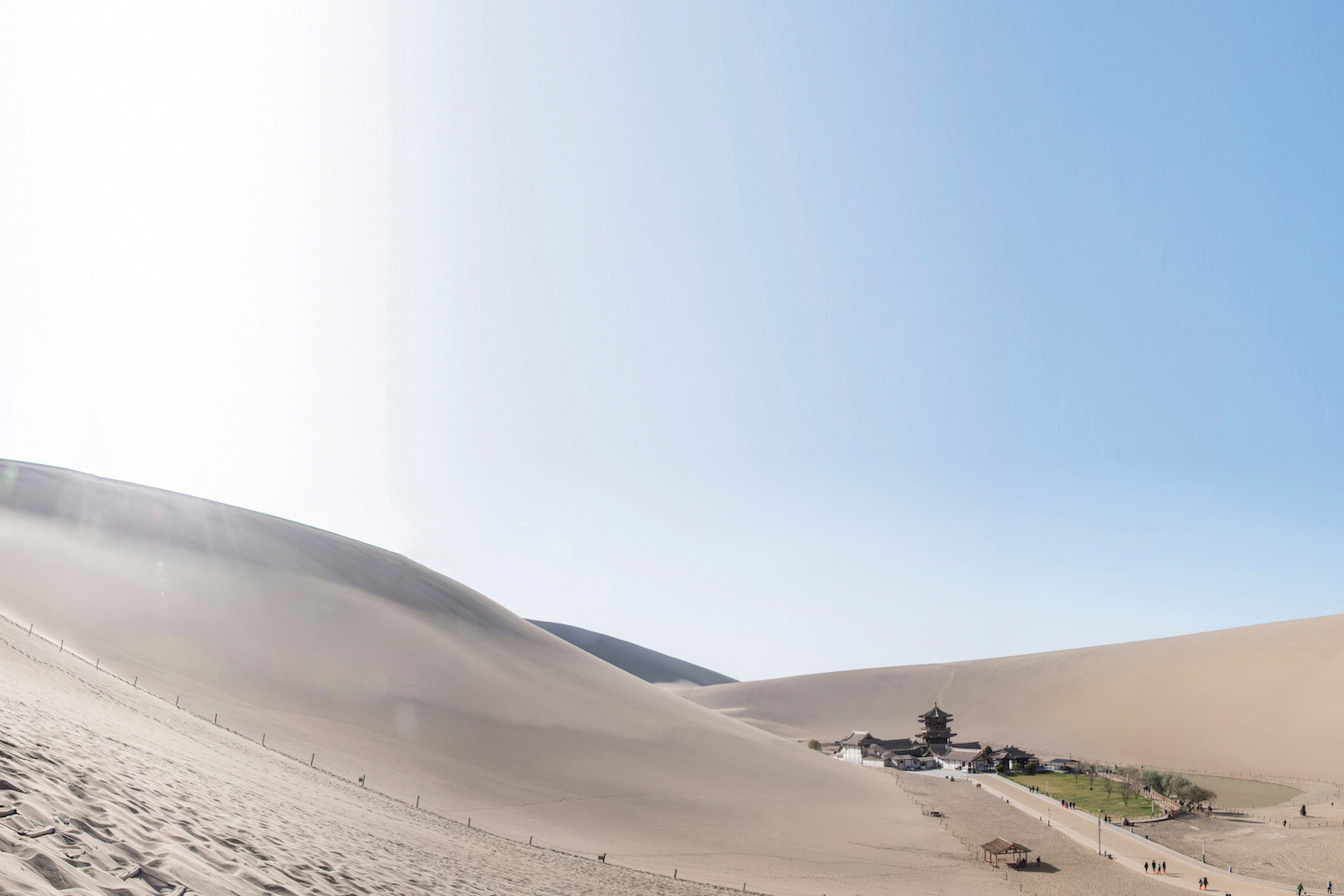 On the other hand, Dunhuang is the most remote destination in Gansu, and since I found Mogao Caves disappointing, there wasn’t a whole lot else in the area to keep me entertained—I have no interest in eating donkey meat, a local specialty, and was too tired by that point in my trip to make the trek to Yadan Landforms, which admittedly seems interest.

About the Lonely Planet Thing

As I referenced at the end of my first Gansu blog post, I’m calling shenanigans on the Gansu Lonely Planet endorsement, in spite of the fact that I mostly enjoyed my trip. I speak Chinese at a functional level—and, having lived in Shanghai for almost a year, and more than accustomed to the various quirks and deficiencies of Chinese culture—yet I still found Gansu a difficult place to travel more days than not.

Whether they got paid or not, it was irresponsible for Lonely Planet to have recommended Gansu as enthusiastically as they did. You’d be foolish to follow their advice if you’re not an experienced China traveler (not to mention, a very tough person in general).

Gansu attractions are some of the most impressive in China, but you’ll need a good grasp of the Chinese language—and a high level of patience—in order to travel here. For every transcendental sight like Xiahe’s Labrang Monastery or the Mogao Caves in Dunhuang, there’s an arcane regulation or unappetizing cuisine option to turn your grin into a grimace. Also see this page for more on the Zhangye National Park.

Robert Schrader is a travel writer and photographer who's been roaming the world independently since 2005, writing for publications such as "CNNGo" and "Shanghaiist" along the way. His blog, Leave Your Daily Hell, provides a mix of travel advice, destination guides and personal essays covering the more esoteric aspects of life as a traveler.
Read More Share
WBTW’s 2018 Mother’s Day Gift Guide
The Culture & History of China’s Xi’an