“Bell Tower,” I said in English, the actual name of the famous Xi’an landmark having slipped my mind. I didn’t have any pictures of it saved in my phone, and since the SIM card desk inside the airport had only accepted WeChat payments, I was unable to get online and show the taxi driver where I wanted to go in Xi’an. Soon a couple of police officers, a janitor and a man waiting for his wife to exit the arrivals area huddled around the car, the sky above us pitch black on account of the late hour. All befuddled, they let out moans in near-unison, a disappointment as deep as the pit the Terracotta Army stands in. Who does this lao wai think he is?

I certainly couldn’t defend myself. I’d once called the Middle Kingdom home, after all—I knew better than to set foot on Chinese soil without well-oiled Mandarin, or an internet-connected app to make up for mine being as rusty as it was.

I’d been taking out my frustration on an index card someone at the airport exit had given me, when the thought occurred to me that I should take a look at it. Sure enough, a crude drawing of the Bell Tower was right in the center of the now-crumpled leaflet. “Zhe li,” I pushed it toward the face of the driver, who quickly put on a pair of reading glasses. “Wo yao qu zhe li!”

He laughed and said something to all the others too quickly for me to understand it, then turned back in my direction. “Zhong Lou,” he pointed to the icon on the sheet of paper and gave me a thumbs up.

Zhong Lou, I repeated under my breath as we began speeding toward the city center, my face as red as the Ming-era monument glowed when I finally laid eyes upon it about 45 minutes later. Ai yo, Zhong Guo.

Xi’an was supposed to be the “easy” part of my trip, a semi-familiar place where I could gather my bearings before heading into the wilds of nearby Gansu. But as my high-speed train left Xi’an and then approached the city of Lanzhou the following afternoon, I braced for a hard landing.

A good move, it turns out.

“I’m not from here,” Phoebe, a Yunnanese girl I’d met in my guesthouse, insisted over a bowl of Niu Rou Mian, a beef soup with hand-pulled noodles I would soon conclude was the provincial capital’s only redeeming quality. “So you don’t need to be diplomatic.”

A dystopian cacophony of slate skyscrapers, buckling bridges and smoker’s coughs crowded along the banks of the Yellow River, Lanzhou matched the picture I imagine many Asiaphobic foreigners have of urban China, but whose existence I’ve sought to disprove during my many journeys though the country, which suddenly seemed to have been in vain.

Claryvan, a Dutch woman who inexplicably owned the most popular hotel in adjacent Xiahe, tourism hub of Gansu’s Gannan autonomous Tibetan prefecture, was even more pointed in her criticism. “Lanzhou is a shithole,” she winked playfully, “to use the words of your president.”

Xiahe, of course, presented its own complications to the critically-minded traveler, in spite of how pleasurable walking along the prayer wheel-lined perimeter of its sprawling Labrang Monastery was. (Though locals, thankfully, possessed just as much candor as imports like Claryvan.)

“If I point at them,” the middle-aged man said between puffs of his pipe, “that police officer over there will come and arrest me.”

He’d called me over to him as I exited Nomad Restaurant, the scent of yak-meat momos no doubt still on my breath, and was referring to the rigid, metal Chinese flags that lined the town’s main boulevard, affixed to every light pole as far as the eye could see. “I fucking hate that piece of red toilet paper and its yellow shit stars—I am Tibetan, and this is Tibet.”

Encounters like these (thought not so much the momos, at least not yak-filled ones) made me wish I could visit Tibet-proper without a Han Chinese guide, or at least that I’d planned to spend the subsequent two weeks exploring Tibetan-majority towns, rather than locales farther north and west in Gansu. 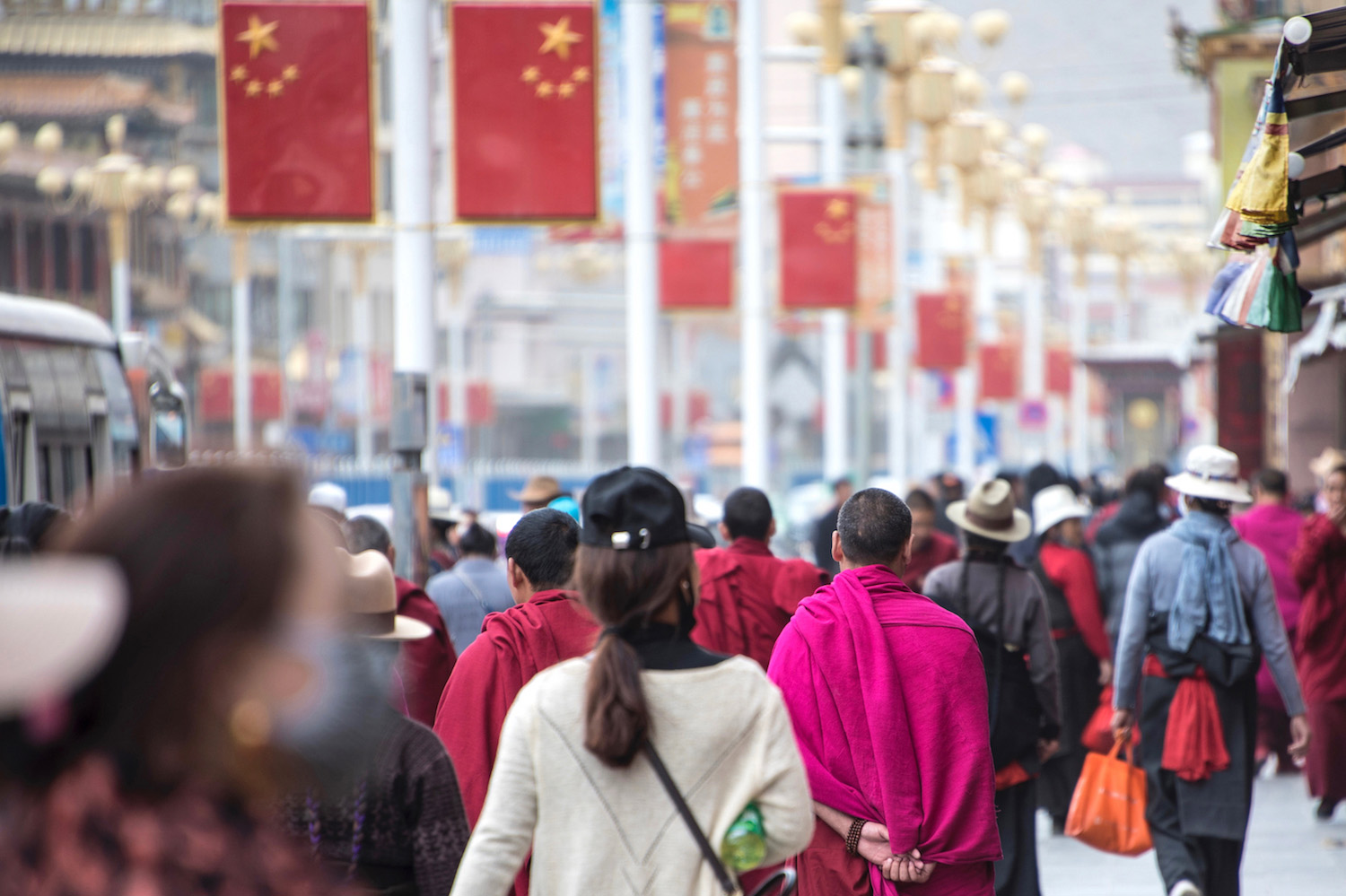 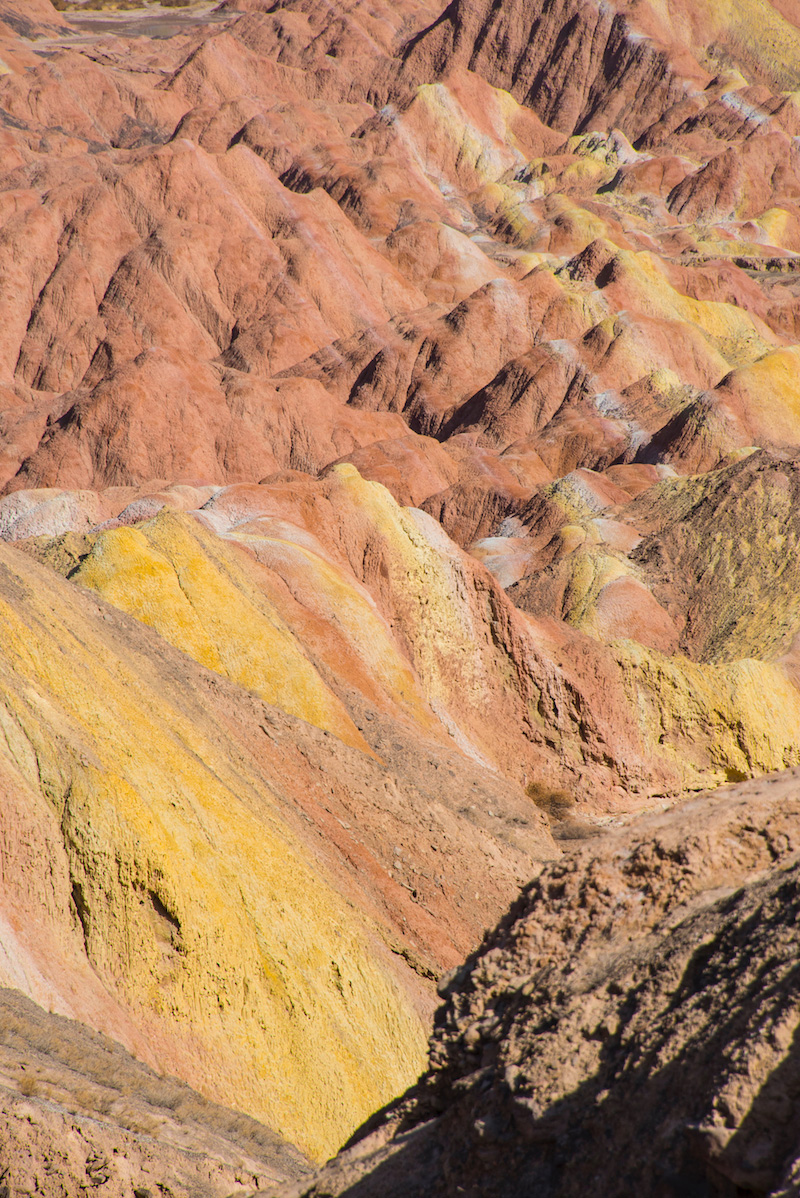 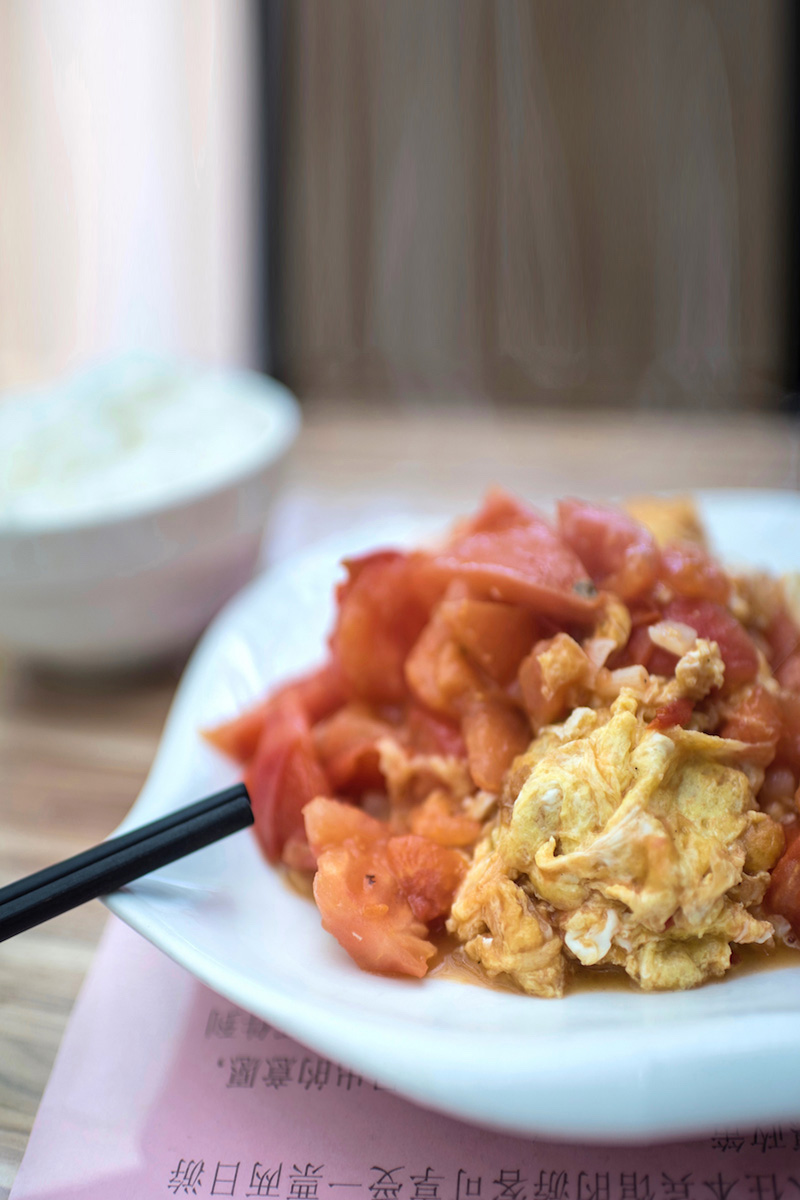 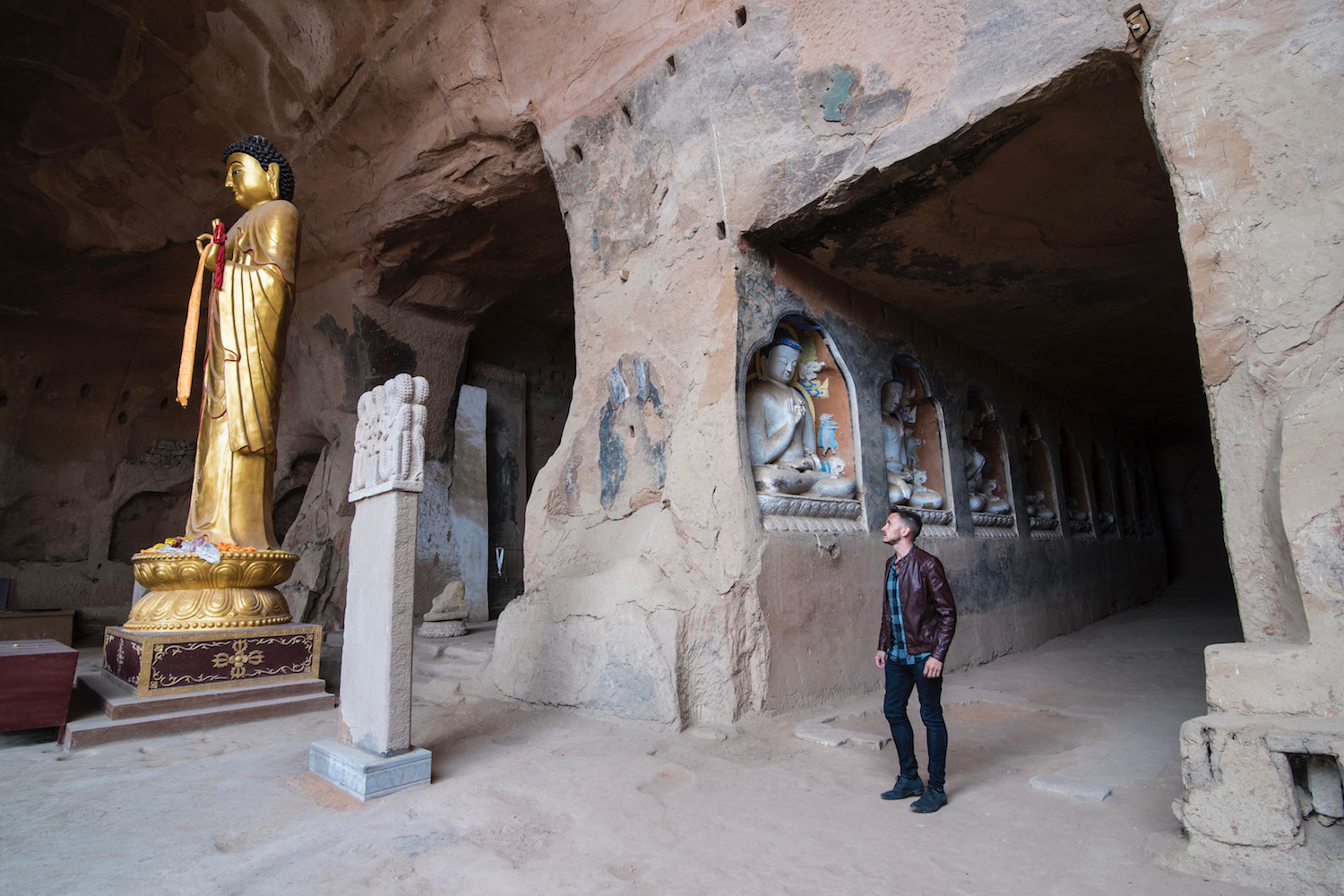 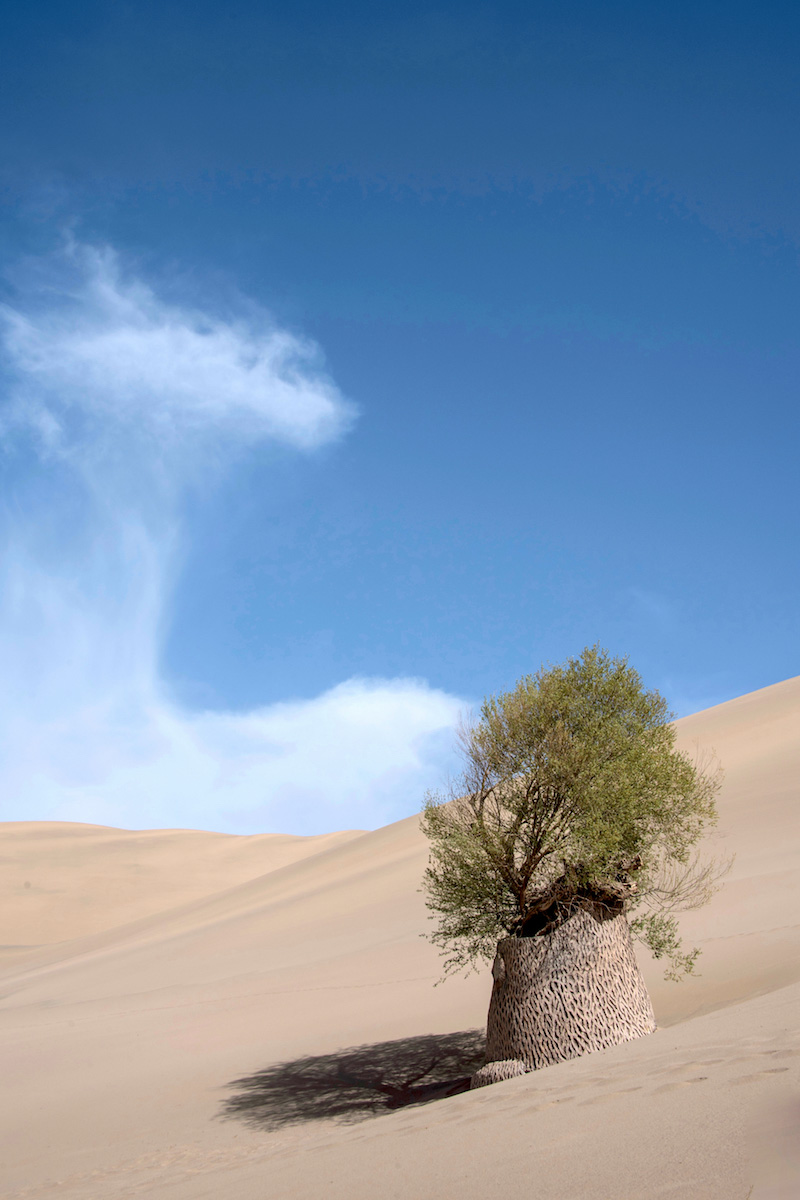 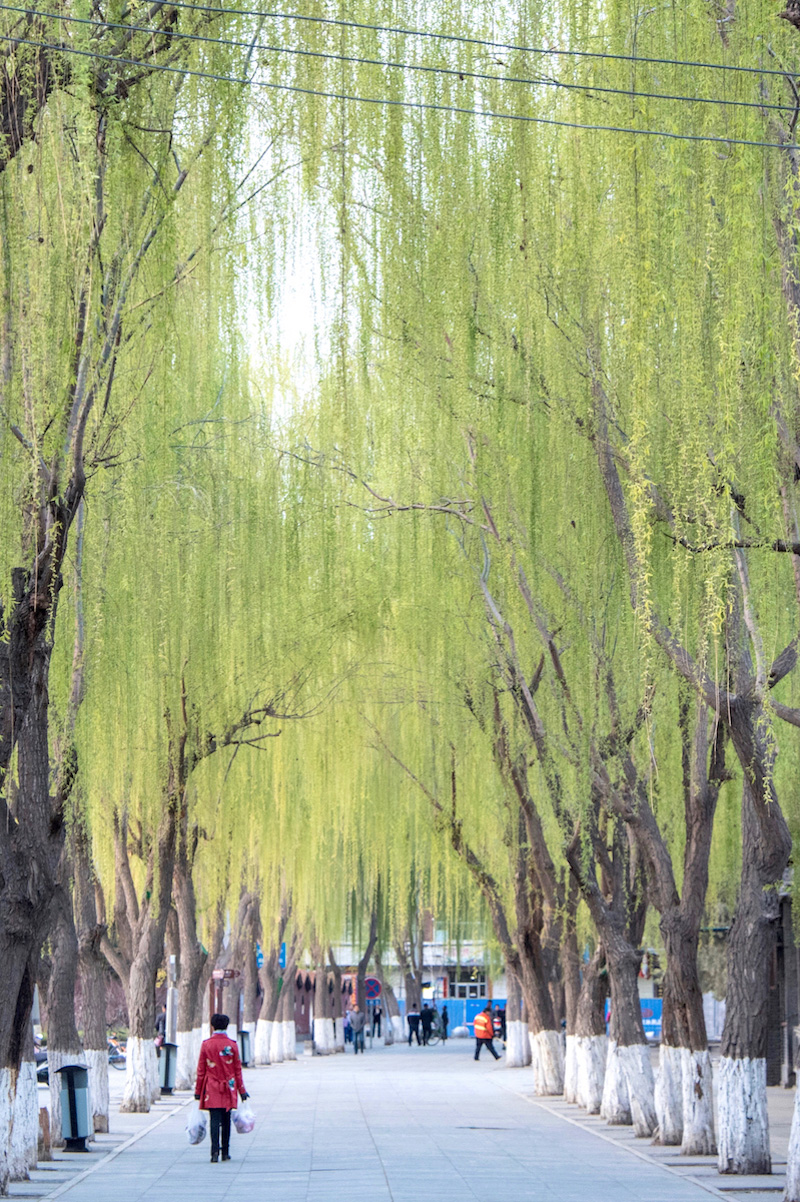 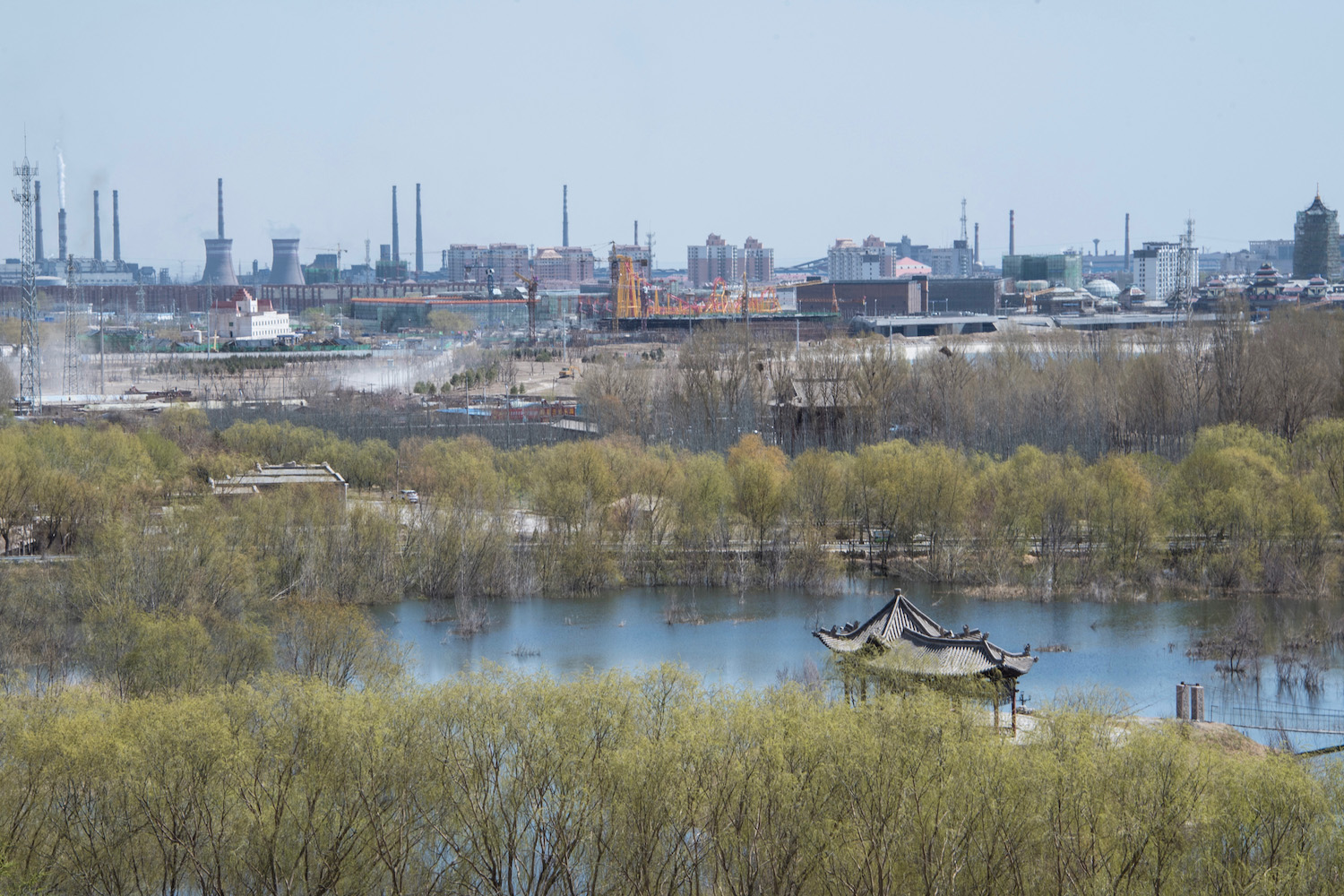 Instead, I set off the next morning on the long journey to the city of Zhangye, the sunny skies and 25ºC temperatures of the previous afternoon replaced with a blanket of clouds and soft, wet snow flakes falling awkwardly from it. Zhangye was decidedly not-Tibetan, even if the second-most famous attraction in its vicinity (the cliff grottoes of Matisi Temple) dated back to the time of lauded King Gesar.

Its first, the increasingly hyped Danxia Landform, seemed like it could’ve existed in the southwestern United States, with orange, red and yellow striations striped onto its canyons and gorges, which specified neither of geography nor culture apart from the fact that they perfectly matched the plate of fan qie chao dan I scarfed down for lunch—pure coincidence, no doubt.

My next stop, Jiayuguan, boasted a spread of sights that seemed, at least on paper, more impressive than what Zhangye had offered. But even taking into account the magnificence of Jiayu Pass, allegedly the oldest surviving section of the Great Wall, their collective wow factor proved insufficient to counteract the quantity of particulates the city’s power plants spewed into my lungs.

(Certainly, I never felt for an instant like I was along the now-defunct Silk Road, even as the fruits of Xi Jinping’s “One Belt, One Road” initiative blocked my bronchial tubes.)

The pre-eminence of industry over history was most evident, ironically, as I walked atop the restored walls of the Pass itself, the enormity and numerousness of cooling towers and smokestacks around it so great that I could hardly take a picture without one of them in it.

In spite of this (and a snide remark from the taxi driver, who dismissed me as one of “the world’s peacekeeping police” on account of President Trump’s announcement of renewed military action in Syria), I remained excited as I made my way to the railway station significantly before dawn the next morning.

I was bound for Dunhuang, after all, whose iconic “Pagoda of the Dunes” had been what convinced me I needed to come to Gansu in the first place. I had a feeling camels would be roaming through the Gobi Desert borderlands, too, which is always a plus as far as I’m concerned, though I had a feeling they’d be of the two-humped variety (I prefer mine with one).

The two sunsets I watched amid the sands proved not only satisfying, but illustrative of my two weeks in China’s Wild West as a whole.

Though I had to stand in a particular spot to enjoy myself, both along the shore of the Crescent Lake (to obscure the Disneyland-like crowds inside the souvenir-shop pagoda) and atop Mingshan Mountain (if I went too high, I could see the industrial hellscape on the horizon), the reality I created in doing so lived up to my expectations precisely.

I guess this is the easy part of my trip after all, I sighed in relief as my train pulled back into Xi’an 14 days after first landing there, feeling as enchanted by the Bell Tower as I did relieved by the availability of non-instant coffee, my Chinese-language skills revved-up enough that the airport incident seemed like it had never happened.

I don’t read Lonely Planet (for reasons I won’t go into here), but when I learned about halfway through my trip that Gansu had appear on the organization’s 2018 list of top Asia destinations, a single phrase came to mind: Get money, bitch!

Unlike Xi’an, Gansu, to its credit, is a culturally and ecologically…um, complex region of a highly misunderstood country; it has a great deal to offer travelers who can see the proverbial forest for the trees (even when there are literally none of either, as is often the case in this part of China) or who can see value even in experiences they don’t particularly enjoy.

But the thing is, Gansu is an immensely challenging destination, even if you speak a decent amount of Chinese like I do, and even if you know what to expect in China outside Beijing and Shanghai like I did.

I cannot, for a second, imagine most LP readers I know personally (let alone the countless elephant-pants wearing backpackers I see in train stations and town squares around the world) turning up in Lanzhou or Xiahe or Dunhaung (or hell, even Xi’an) and not being stressed out to the point of wanting to burn their passports.

Without a doubt, Lonely Planet received remuneration for promoting Gansu with the enthusiasm they did, and for painting it as being accessible enough for kids who might otherwise head to Brazil or Bali. (Not that the edge of this shade will ever reach the face of a single employee of or contractor for the publication.)

My conclusion, to be sure, is too nuanced for any guidebook: Follow in my footsteps and head to Gansu—but only if you take time to consider the entirety of this dispatch. And only if you have the experience to see it not as a rant or a warning, but a lamp to cut through the shadows (and, yes, the smog) that too often darkened my path.

Have you ever been to Xi’an or Gansu ?What did you think?What about Lanzhou or Xiahe or Dunhaung and your comparisons to Xi’an

Robert Schrader is a travel writer and photographer who's been roaming the world independently since 2005, writing for publications such as "CNNGo" and "Shanghaiist" along the way. His blog, Leave Your Daily Hell, provides a mix of travel advice, destination guides and personal essays covering the more esoteric aspects of life as a traveler.
Read More Share
The Human Costs of Immigration & Closing the Golden Door
New Living Expo For Spiritual Teachings & New Age Resources