A lot of you might’ve clicked on this post out of morbid curiosity, asking yourself “where is Brunei?” rather than wondering “is Brunei worth visiting?” (or not).  And that’s fair. The smallest country on the island of Borneo, which has only been totally independent from the UK since 1984, Brunei is notable not for its culture or scenery, but because of the vastness of its oil reserves. I’ve been wondering whether I should visit Brunei for years, having seen the nation trashed by almost all my colleagues who’ve previously gone. Brunei proved to be an extremely pleasant surprise, even if I’m not in a rush to get back there.

“The” Mosque and Bandar Seri Begawan

I began my exploration of Bandar Seri Begawan (aka Brunei City) in a moment of panic. I’d wanted to see the sunset behind Sultan Ali Omar Saifuddin Mosque, but the owner of my guesthouse arrived late to fetch my travel companion and I, and the sky was totally black by the time we arrived at Brunei’s most iconic attraction.

This—hurriedness and imperfection—would prove to define much of my first 24 hours in Brunei. I enjoyed the Royal Regalia Museum, for example, less because of its mostly frivolous “artifacts” (Brunei is only marginally older than I am, remember) and more because of photos that depicted the Sultan when he was young and sexy.

Likewise, my priceless sunset moment would come when I was in the vicinity of a far less famous Brunei mosque, and I nearly missed this one as well. The orange tones in the sky had just cooled to pink as I slammed the car door; the colors began to fade entirely by the time I finished photographing the house of worship, built shortly before the Sultan’s second wife cheated on him. 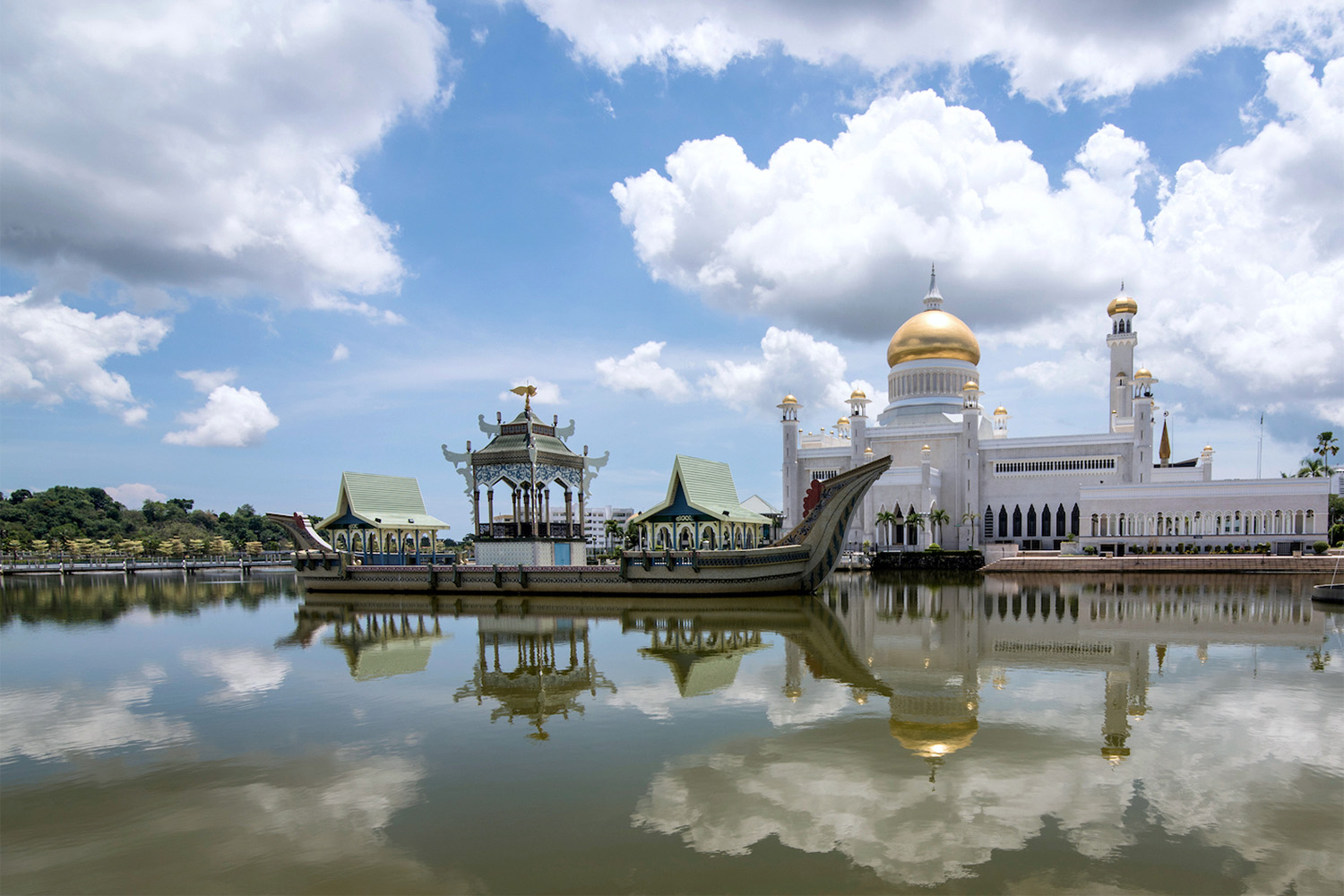 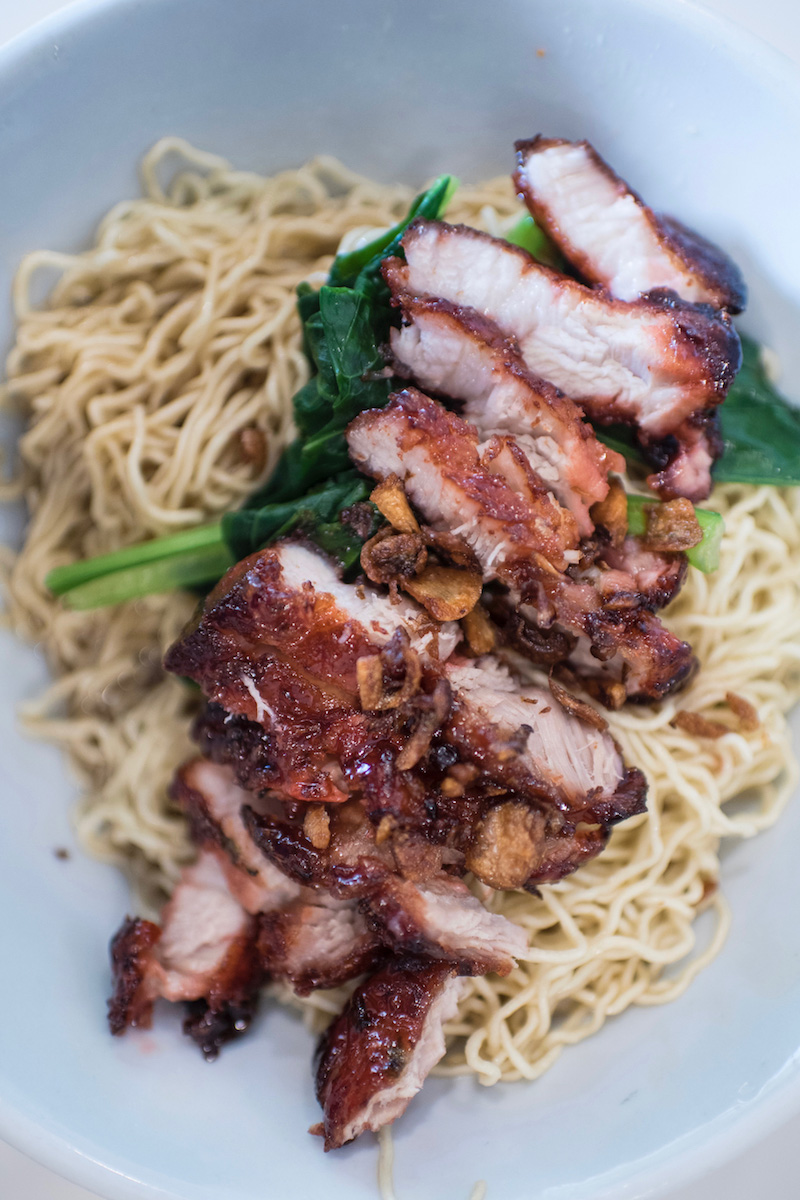 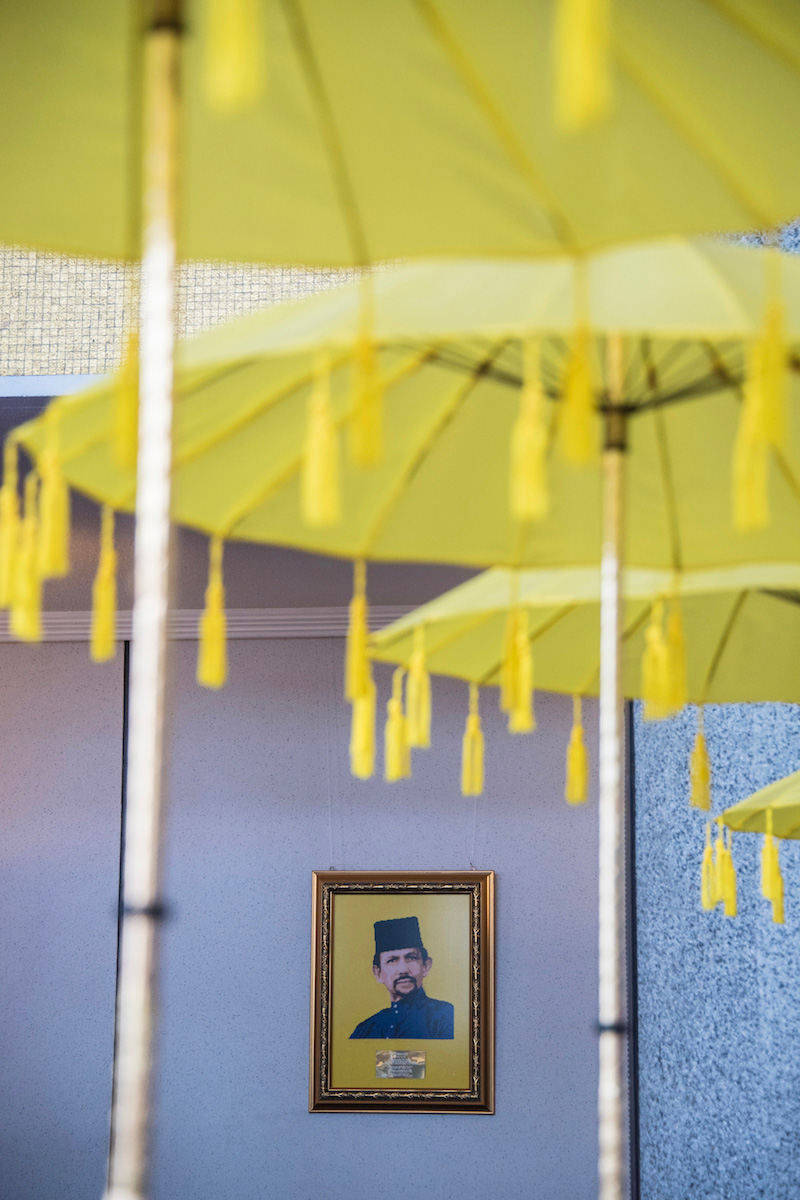 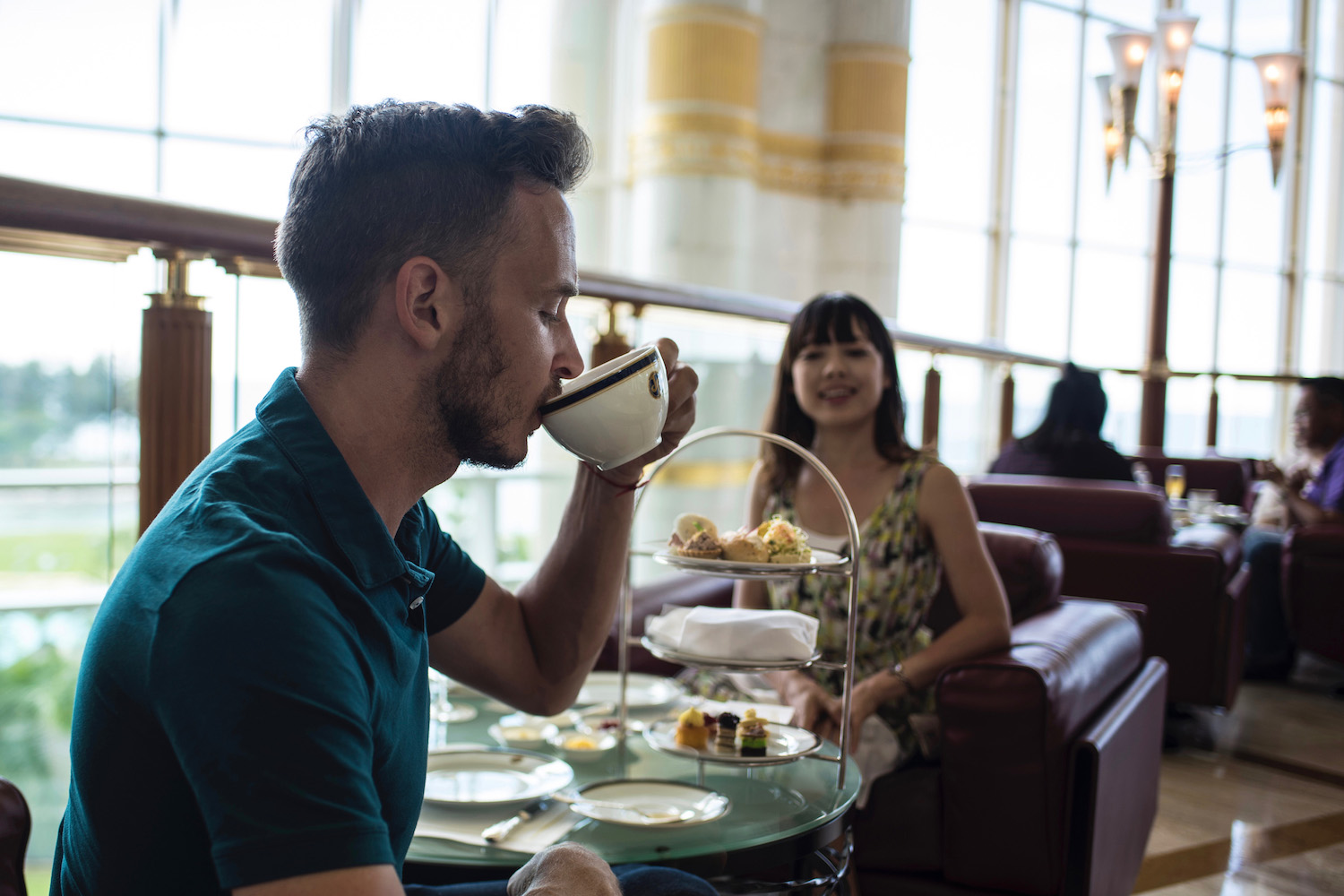 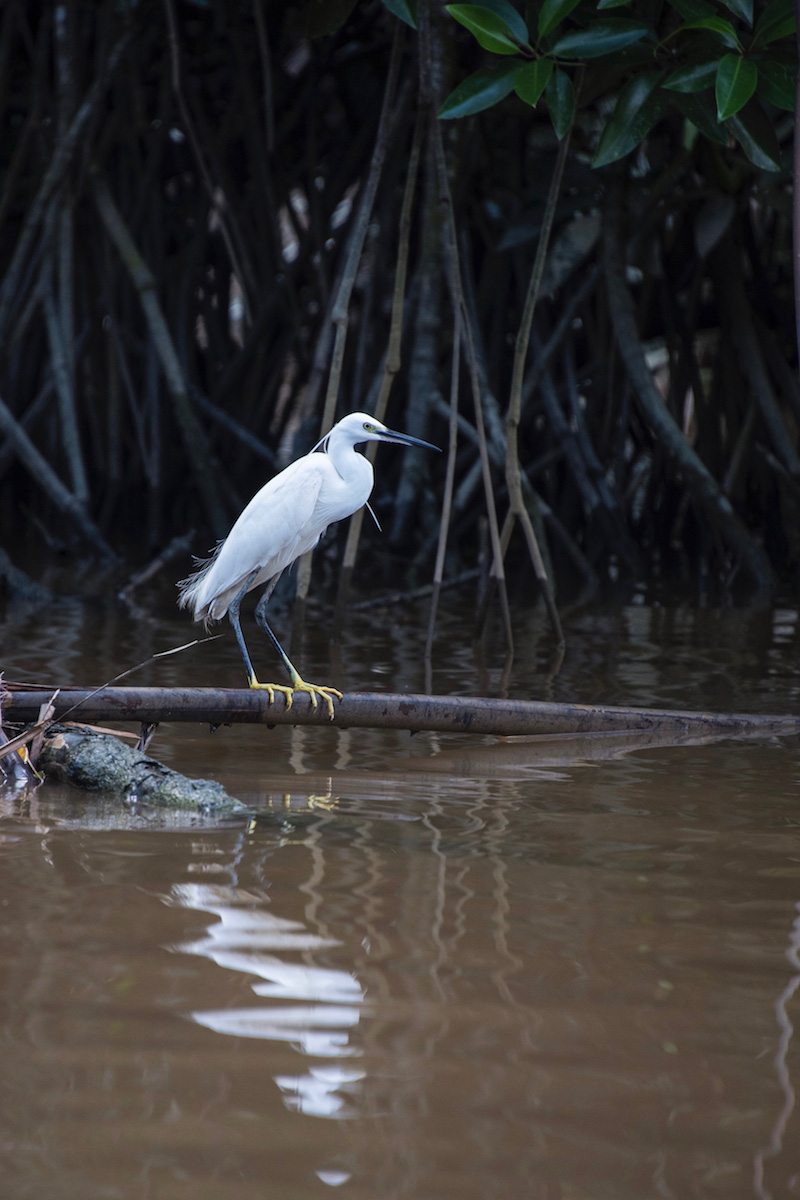 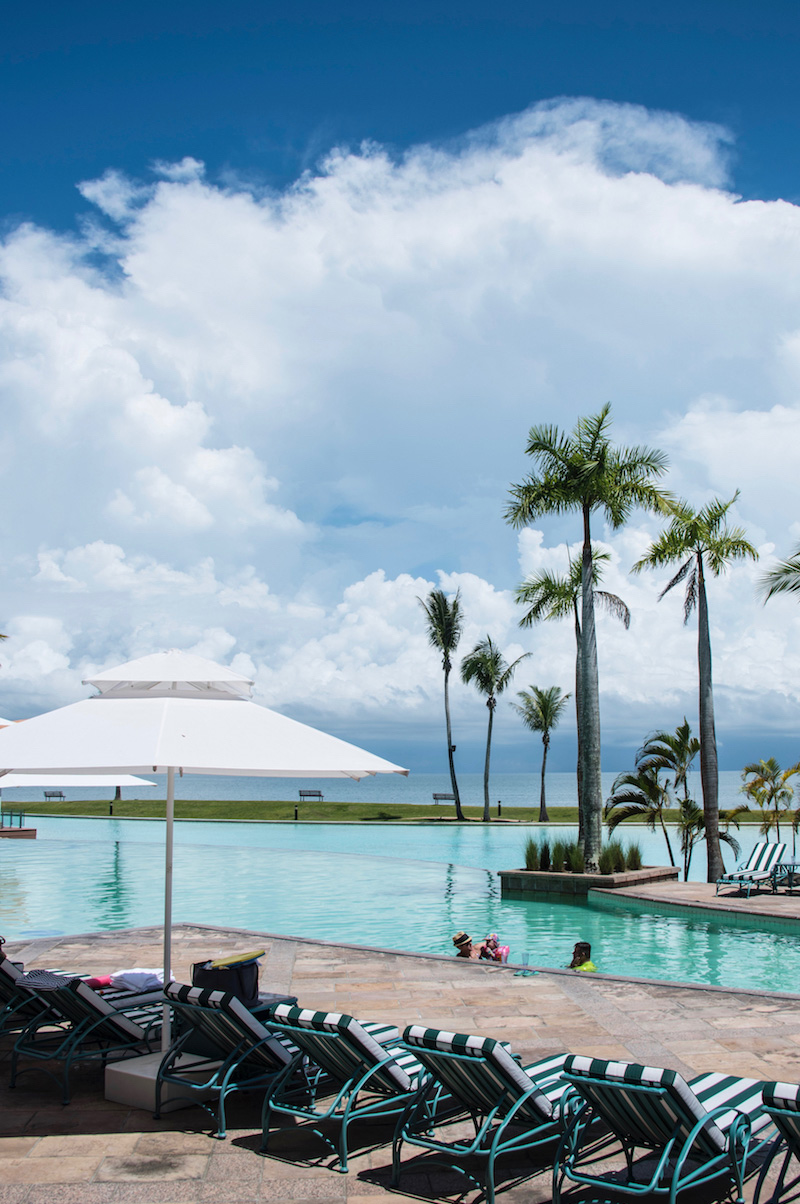 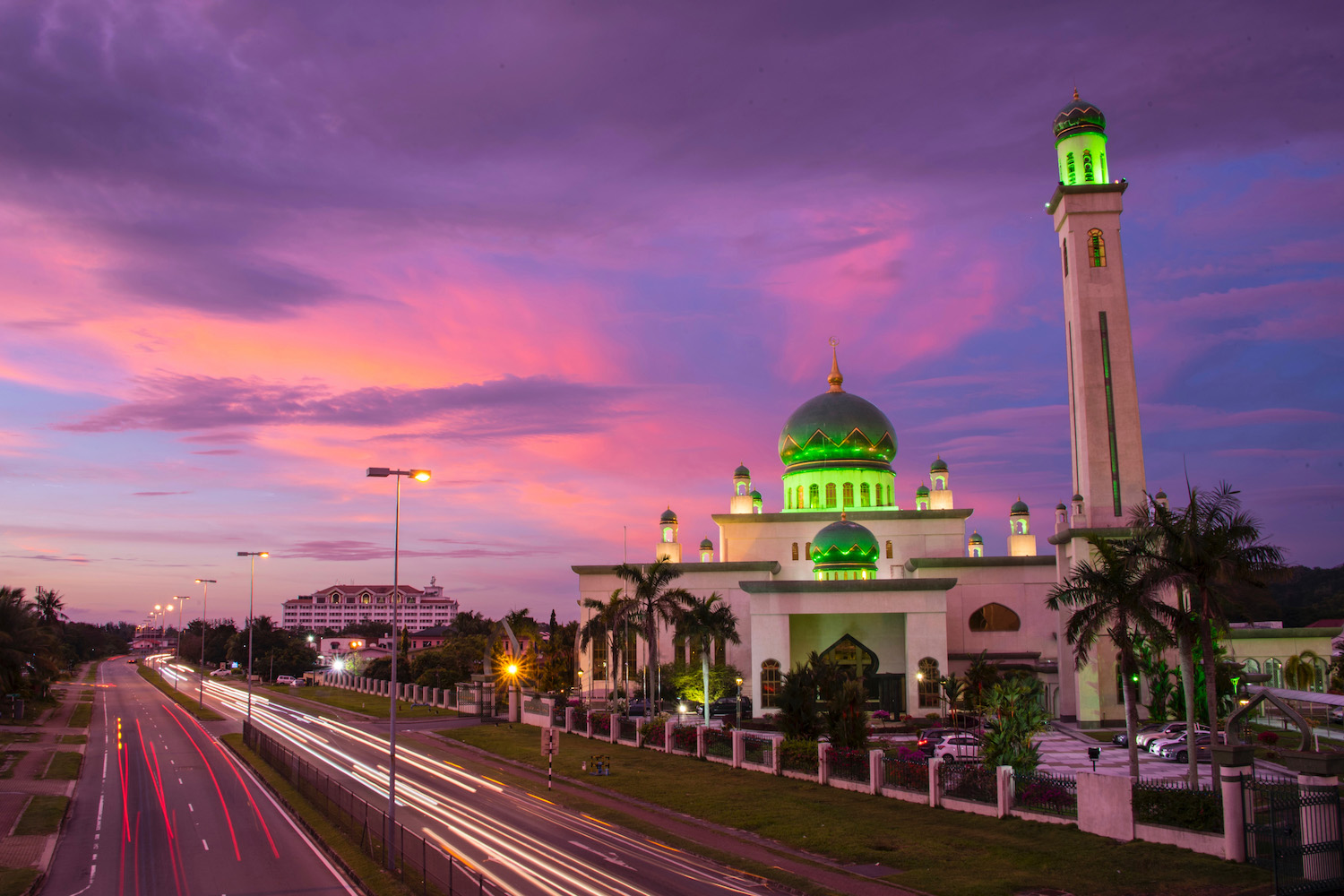 Brunei is mostly rainforest and uninhabited coastline, which means that many attractions in Brunei are far outside the city and have nothing to do with Islam.

From the so-called “water village” of Kampong Ayer, to the proboscis monkeys I’m told live in the mangrove swamps along the Brunei River (I didn’t see any—as had been the case with my driver at sunset, the boat captain took his time taking me to where we I wanted to go), Brunei’s less obvious attractions are just as photogenic as the ones the tourism board actually advertises.

Well, most of them—I wasn’t impressed by Brunei’s beaches. The highlight of my trip to the “six-star” Empire Hotel, if I’m honest, was the bizarre man who ended up giving Eriko and I a ride there. A talkative 40-something who blared the minor 1980s hit “Rivers of Babylon” on loop as he alternated between karaoke and stories about his unabashed infidelity, he certainly seemed more befitting of Babylon than Brunei.

With at least as many short skirts as hijabs, Brunei is not a conspicuously conservative country. But just as you won’t find Sharia law in Brunei, alcohol is strictly forbidden, even for non-Muslims.

“Maybe at the Brunei Malaysia border,” one of the young men who accompanied Eriko and I on an afternoon hike at Bukit Shahbandar, also known as the “Grand Canyon of Brunei,” told me when I asked where in Brunei I could enjoy a proper drink.

It was disappointing, in spite of the fact that I don’t drink all that much these days, but the irony of it made me laugh. My first meal in Brunei had been pork, after all (the only open restaurant near my guest house was owned by Chinese Bruneians, who don’t observe Halal guidelines); it made sense that the dreams of champagne I’d hatched at breakfast would be dashed by dinner.

(Even if I did end up having some sparkling grape juice during high tea at the Empire.)

As we sat in traffic on our way to Brunei airport this morning (five more minutes and we’ve have missed our flight), Eriko asked me to describe Brunei in one word.

“Detached,” I said without hesitation, and not just because of how the high standard of living here separates Bruneians from their neighbors in Indonesian and Malaysian Borneo, nor because of the ban on booze or—shockingly—slow internet. My trip built a welcome barrier between the stress I was feeling before I flew here, and the calm with which I always like return home, and I can’t discount that.

Things to do in Brunei might leave something to be desired, but it’s not as awful as some report. Dare I say Brunei is (mostly) enjoyable?

Well, except for all the human rights stuff. No I’m not trying to make light of the bad things in Brunei—the country’s record on the treatment of its citizens, from its pledge to execute gay people earlier this year, to systematic discrimination against non-Muslims is abhorrent, and certainly gave me pause when deciding whether or not I would visit the Sultanate. I’d hope you would feel the same.

To be sure, the larger point of this Brunei blog, when it comes to the question of “should I visit Brunei?”, was to use the story of my personal experience to give an alternative perspective to stand alongside the indefensible aspects of Brunei’s status quo, not to replace or invalidate it. I should’ve been clearer about my intention from the get-go, which is why I’ve made this addition now.

Is Brunei worth visiting? It’s complicated. On one hand, my own experience in Brunei was surprisingly pleasant. The country boasts beautiful landscapes, impressive (if occasionally gaudy) architecture and friendly people, even if said people seem blissfully unaware of or apathetic to the authoritarian system under which they live. On the other hand, it would be irresponsible for me—and for you—to ignore the long history of human rights abuses in the Sultanate, and while I’ll stop short of recommending against a visit, I do implore you to think twice.

Robert Schrader is a travel writer and photographer who's been roaming the world independently since 2005, writing for publications such as "CNNGo" and "Shanghaiist" along the way. His blog, Leave Your Daily Hell, provides a mix of travel advice, destination guides and personal essays covering the more esoteric aspects of life as a traveler.
Read More Share
Books on Higher Consciousness, the Soul & Beyond
Southern France’s Monaco, Nice & French Riviera