“Where do we go from here?” I asked the young man who’d been hiking alongside me for the previous hour, as we reached the end of the path we were on.

He pointed straight up.

“Right,” I acknowledged, “but how do we get there?”

Just then, a much older man descended the wall as fast as a raindrop falling from the sky, a harness in his hand and a length of rope dangling from his pocket. He smiled at me and said something in the Tigrinya language.

“He’s asking if you plan to climb up with or without support.”

I sighed and looked straight up. I didn’t come this far to give up now. The good news is that I made it up the 30-meter wall of rock without a scratch, minus the 100 birr I had to pay to “rent” the equipment for 10 minutes. The bad news? My climb was only the first of many trials and tribulations I had to endure on my way up to Abuna Yemata Guh, which according to some is the world’s least accessible place of worship. 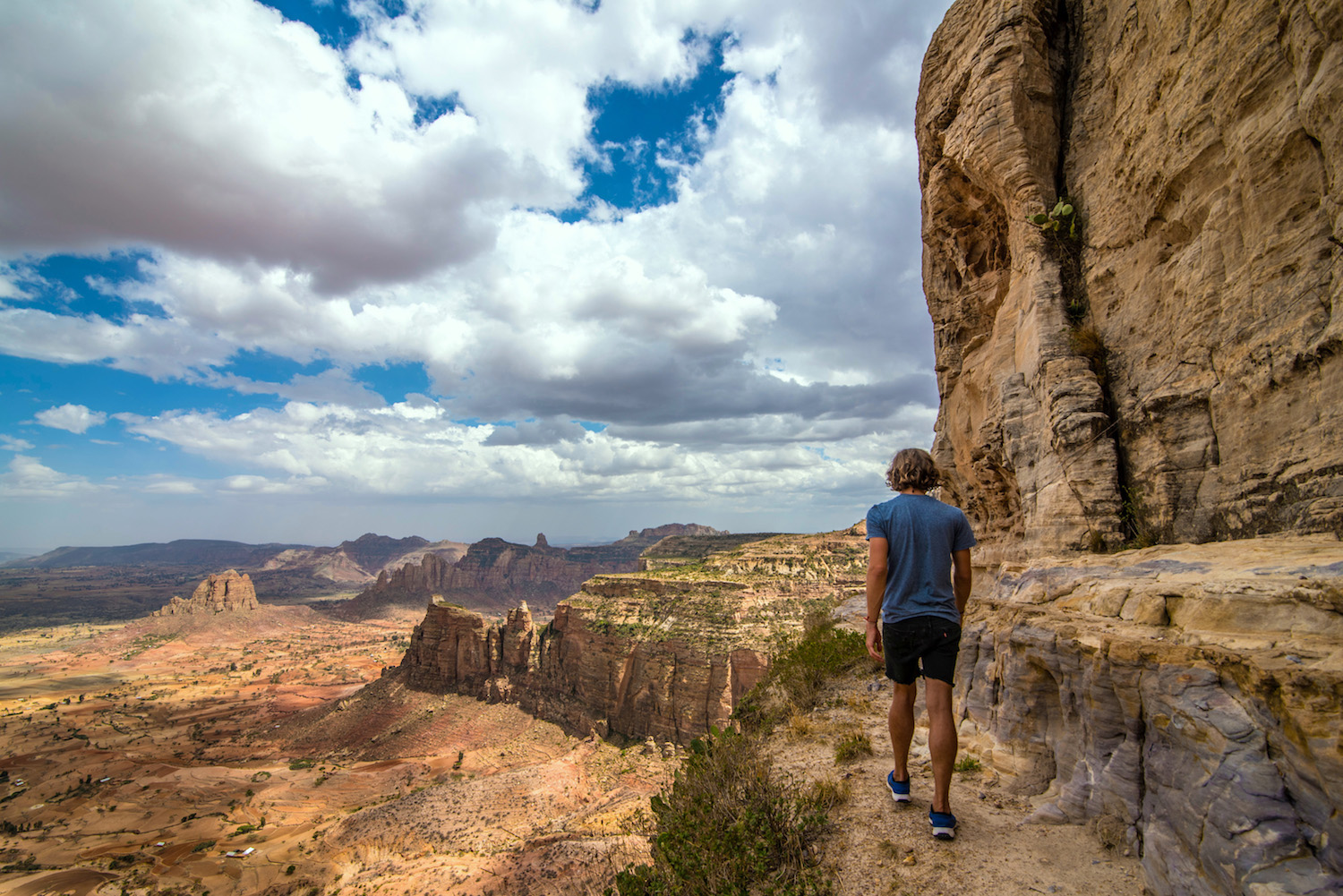 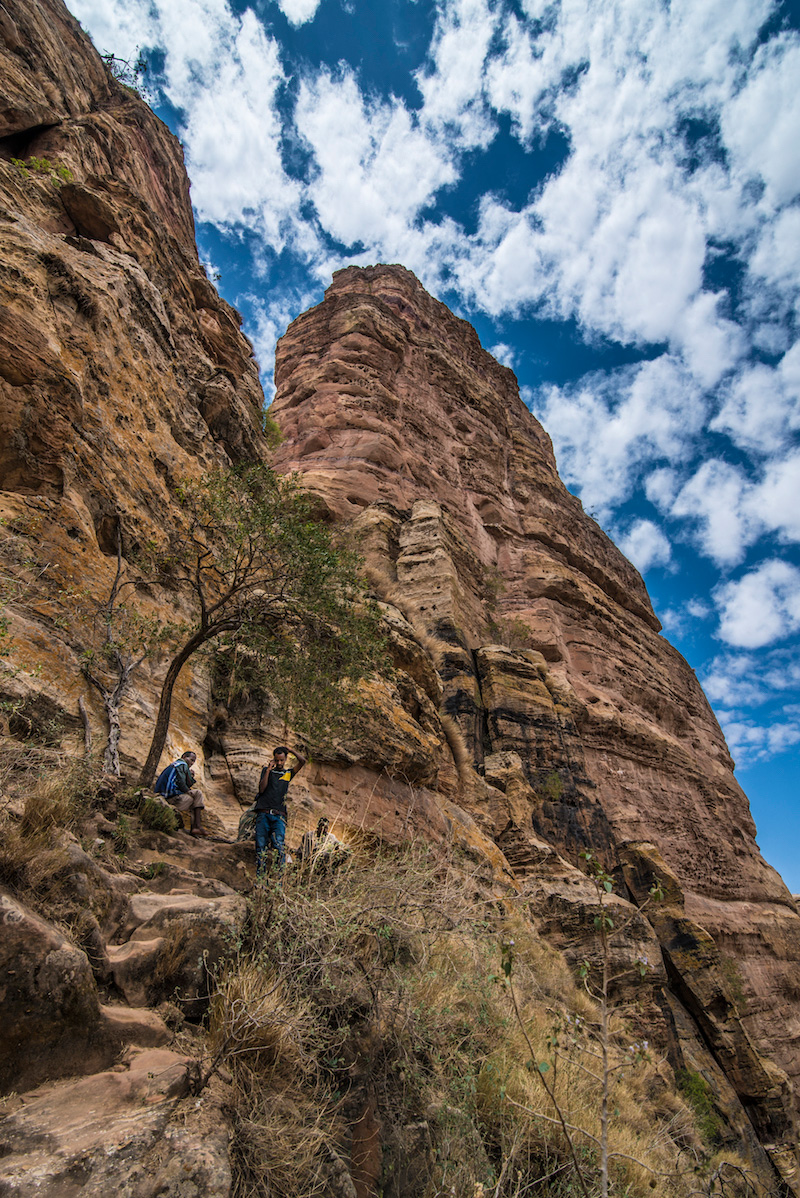 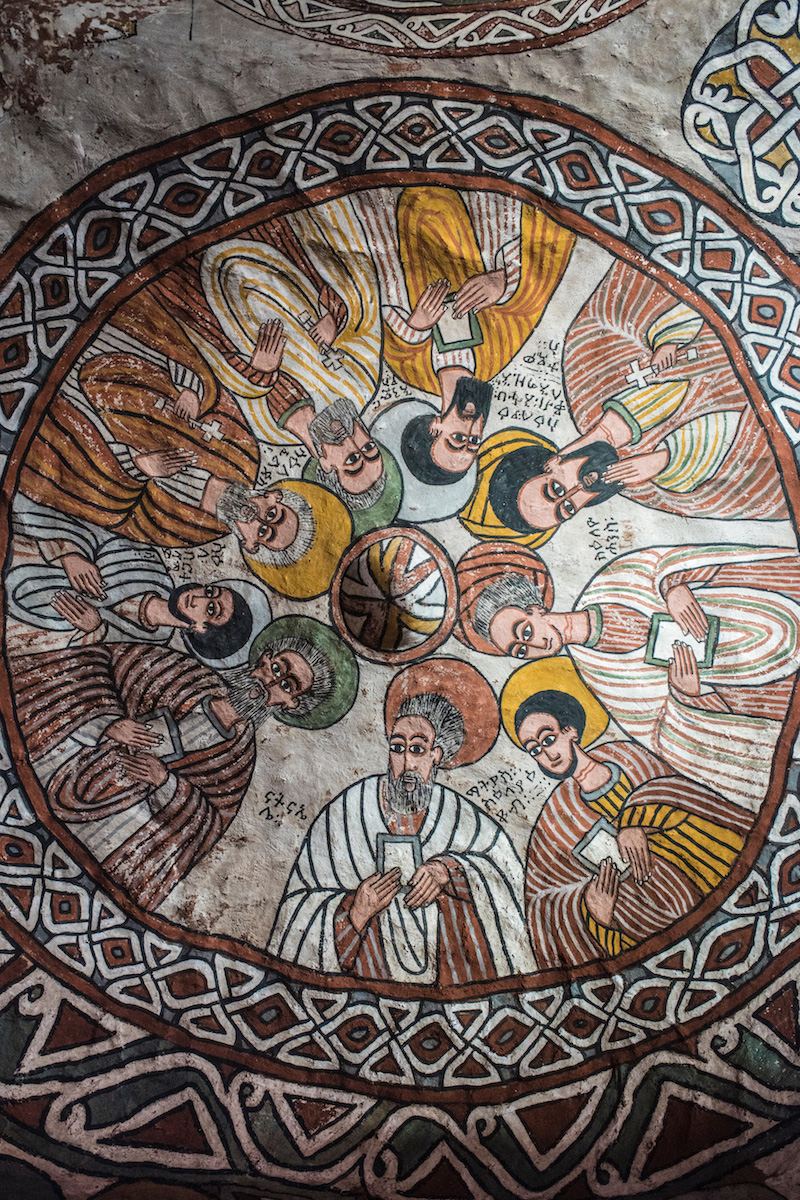 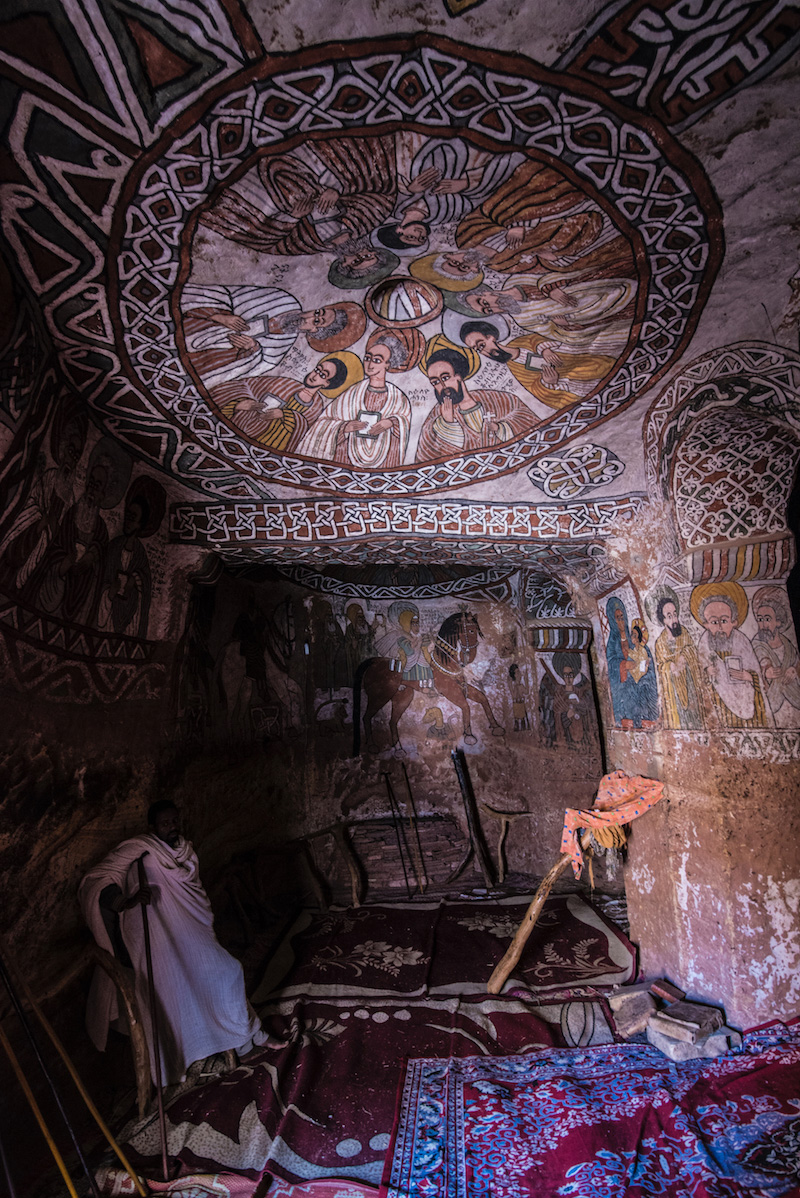 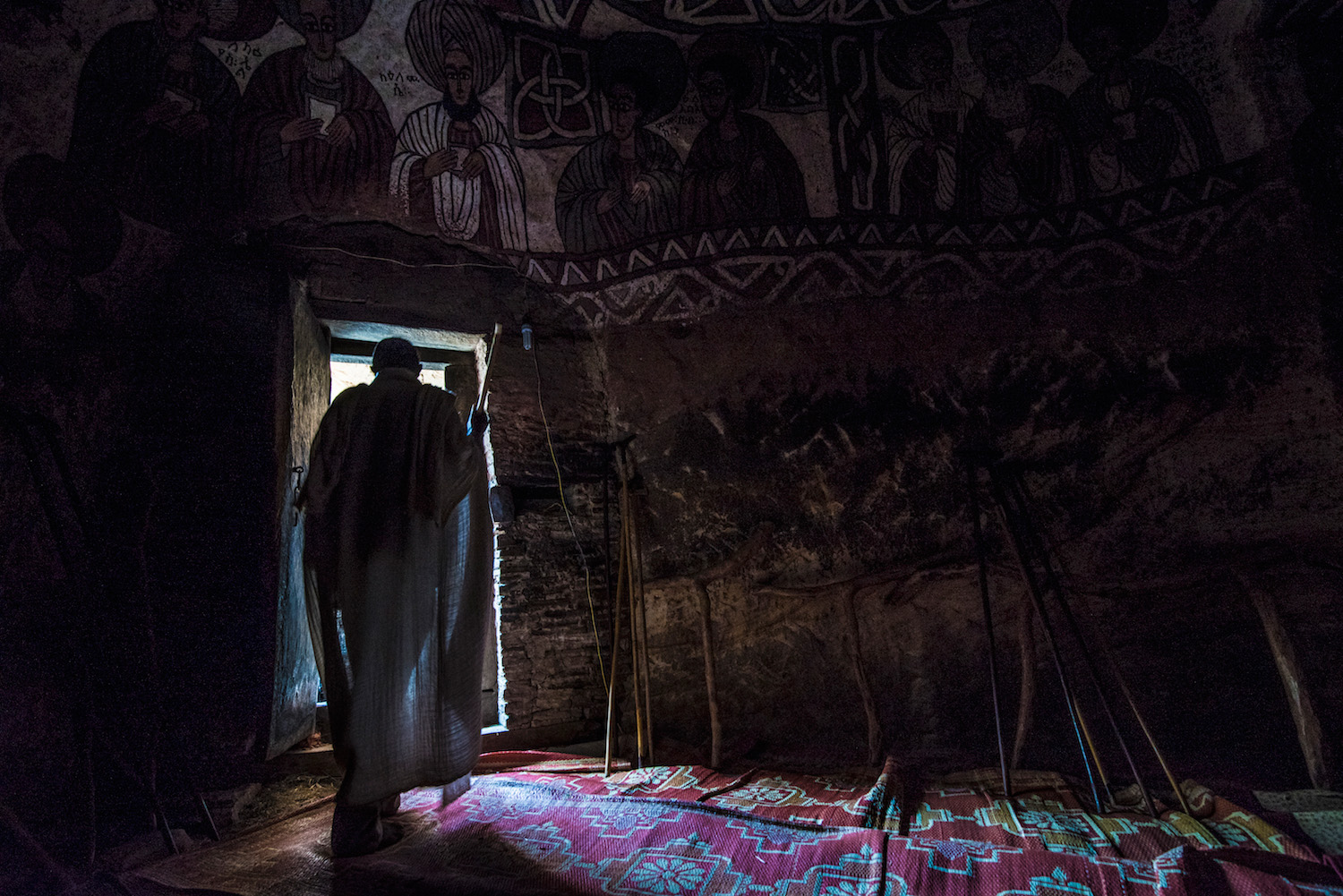 “Local people,” my guide explained, a few seconds after I successfully walked along a foot-wide cliff hundreds of feet above the ground below, “climb up here in the middle of the night.”

“By moonlight?” I asked, feeling weak and embarrassed and prissy.

After our visit to Abuna Yemata Guh we headed to the nearby town of Megab for a local lunch and a traditional Ethiopian coffee ceremony. Then, it was back toward the dramatic mountains where I’d nearly died that morning and toward another rock-hewn church, this one called Maryam Korkor.

“But don’t worry,” he assured me, “this is just a hike—no climbing involved.” 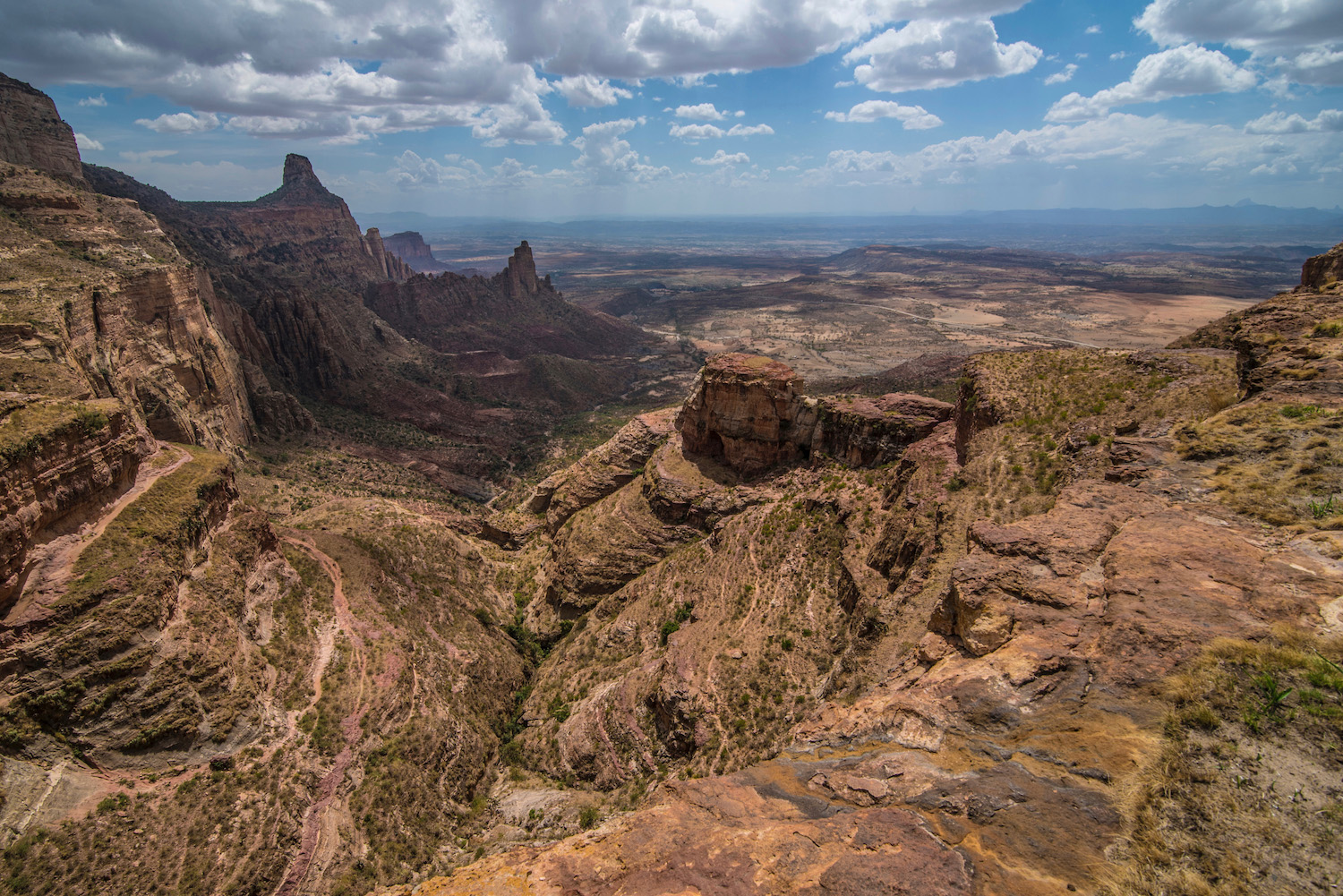 As it turned out, there was some of what I would call climbing, albeit not up a sheer cliff face. The views from the courtyard of Maryam Korkor were arguably more impressive than those I’d seen from Abuna Yemata Guh, however, although the church itself didn’t seem nearly as novel, even if its 17th-century frescoes were impressive.

Instead, it was nearby Daniel Korkor that really stuck out to me. It was not as architecturally sophisticated as Maryam Korkor, which is the largest of the Tigray Church, but the story my guide told me about the monk who hid out in there for a weeks (a story I now can’t find online, and whose veracity I question) made me feel like I was someplace truly forlorn.

How to Visit Ethiopia’s Tigray Churches

Visiting these three Tigray Churches—Abuna Yemata Guh, Maryam Korkor and Daniel Korkor—took the entire of a day that begun in the Ethiopian city of Axum and ended in Mekele (where I set off for my trip into the Danakil Depression). I purchased my tour, which included private transportation for the day as well as a guide, through the same company who took me to Danakil. (I’m not going to recommend them here, though, because they were sort of expensive and sort of not good.)

You will need to be in either Axum or Mekele to make visiting any of the Tigray Churches (and there are many more than the ones I visited) practical. Shop around with tour companies in these cities until you find the price and the itinerary that best suits your needs.

Other FAQ About the Tigray Churches

How many churches are there in Tigray?

Although there are more than 120 churches in Ethiopia’s Tigray region, tourists tend to focus on 3 main ones. These are Abuna Yemata Guh, as well as Maryam Korkor and Daniel Korkor. Personally, I find the death-defying hike to Abunda Yemata Guh to be the most thrilling!

Which is the religion in Tigray, Ethiopia?

The primary religion is Tigray, Ethiopia is a sect of Coptic Christianity under the umbrella of the Ethiopian Orthodox Church. This is reflected in the artwork you find inside the Tigray Churches, which seems strangely reminiscent of what you find in Eastern Europe.

Are Eritreans and Tigray the same?

Eritrean and Tigray people are not the same; the difference between them is the root of the ongoing conflict in the Tigray region. As a result of this conflict, it’s unlikely you will be able to visit the Tigray churches anytime soon (assuming you’re reading this in mid-2022, when I’m writing it).

The bad news? You likely won’t be visiting the Tigray churches anytime soon—they’re in a part of Ethiopia that, as of June 2022, is enmeshed in a civil war. The good news? These timeless holy sites are worth the wait, even if you end up not being able to visit until 2032 or 2024. Indeed, Ethiopia is a destination that will amaze you no matter what part of your life your trip falls within.

Robert Schrader is a travel writer and photographer who's been roaming the world independently since 2005, writing for publications such as "CNNGo" and "Shanghaiist" along the way. His blog, Leave Your Daily Hell, provides a mix of travel advice, destination guides and personal essays covering the more esoteric aspects of life as a traveler.
Read More Share
Top Destinations to See in Ireland
Planning Nature and Safari Time in Africa