My decision to fly Emirates between Christchurch and Sydney was somewhat arbitrary—the Air New Zealand flight I’d been eyeing for weeks before that suddenly surged up in price, even before taking into account all the extra fees that airline charges for…everything. Emirates, even if I had to fly them in economy, offered a lot more for a lot less, to say nothing of the A380 experience versus the one on a cramped A321. What pushed me over the edge, however, was how tired I was after my amazing (but packed) trip around New Zealand, particularly knowing that I’d been returning from Sydney to Tapei. A final sign that this was the right thing to do came when check-in opened for my flight: The cash upgrade price, which had stayed frozen at 504 NZD in the weeks leading up to my departure, had dropped to just NZ$231. Take me money, I said under my breath as I submitted my credit card information, practically giddy.

Unfortunately, Emirates didn’t take my money, at least not immediately. The carrier’s website crapped out, which would’ve been fined if I’d been somewhere civilized and could easily call them. Sadly for me, I was in the overrated town of Punakaiki on the west coast of New Zealand’s South Island, where only one place—the so-called “Pancake Rocks”—had reception. So I drove my rental car to the Rocks’ parking lot; the Emirates representative who answered my call thankfully honored what was supposed to have been a “Now or Never” price, and confirmed my seat in Emirates business class.

Officially, you don’t get access to the airport lounge when you upgrade your Emirates ticket; you do get priority check-in, though I checked in through the app and wasn’t checking bags so I didn’t need it. Due to the size of the A380, Emirates actually boards upper deck passengers from a separate gate; I ended up the first one on the plane.

Immediately upon boarding, a charming man named Carlos greeted me by name, and began chatting me up as if we were old friends. What impressed me most about Carlos (who I quickly learned hailed from Granada, Spain and i had been with Emirates around three years) was how effortless his kind and hospitable manner seemed; I found all the other flight attendants carried this through, whether they were handing out hot towels or champagne, and both during the calm cruise period of the short flight as well as just before/after take-off/landing, when I gave several of them business cards (Hi, if you’re reading!).

Speaking of champagne, Emirates offered a 2013 Moet & Chandon onboard this flight, although I’d admittedly not a sparkling wine connoisseur. Because I knew I had a steak awaiting me on my flight back to Taipei, I ordered a filet of pan-friend ling (I’ll save you the Google search: It’s a type of white fish), which was served in a delicious and buttery sauce with quinoa. Before exiting my wonderful seat in Sydney I also saved some kind of flan with raspberry sauce and a couple of iced Americanos, which distracted me from a live CNN feed that showed the beginning of the Iowa caucus carnage.

Emirates A380 Business Class Seat and Onboard Bar

I said “at my seat” (which was comfortable and spacious, in spite of being admittedly gaudy) because I couldn’t fly Emirates’ A380 business class without trying its most famous amenity: The onboard bar located at the back of the Upper Deck. The friendly bartender back there prepared a tasty Old Fashioned for me, during a bout of relatively heavy turbulence no less (albeit without the massive cube of ice I usually expected in this particular cocktail). I hope I’ll be able to fly Emirates business on a longer flight soon in order to more properly appreciate this feature.

The web is full of images from Emirates’ A380 business class, but I’d like to think mine are slightly more artistic (or, at least, beautiful) than most of those: 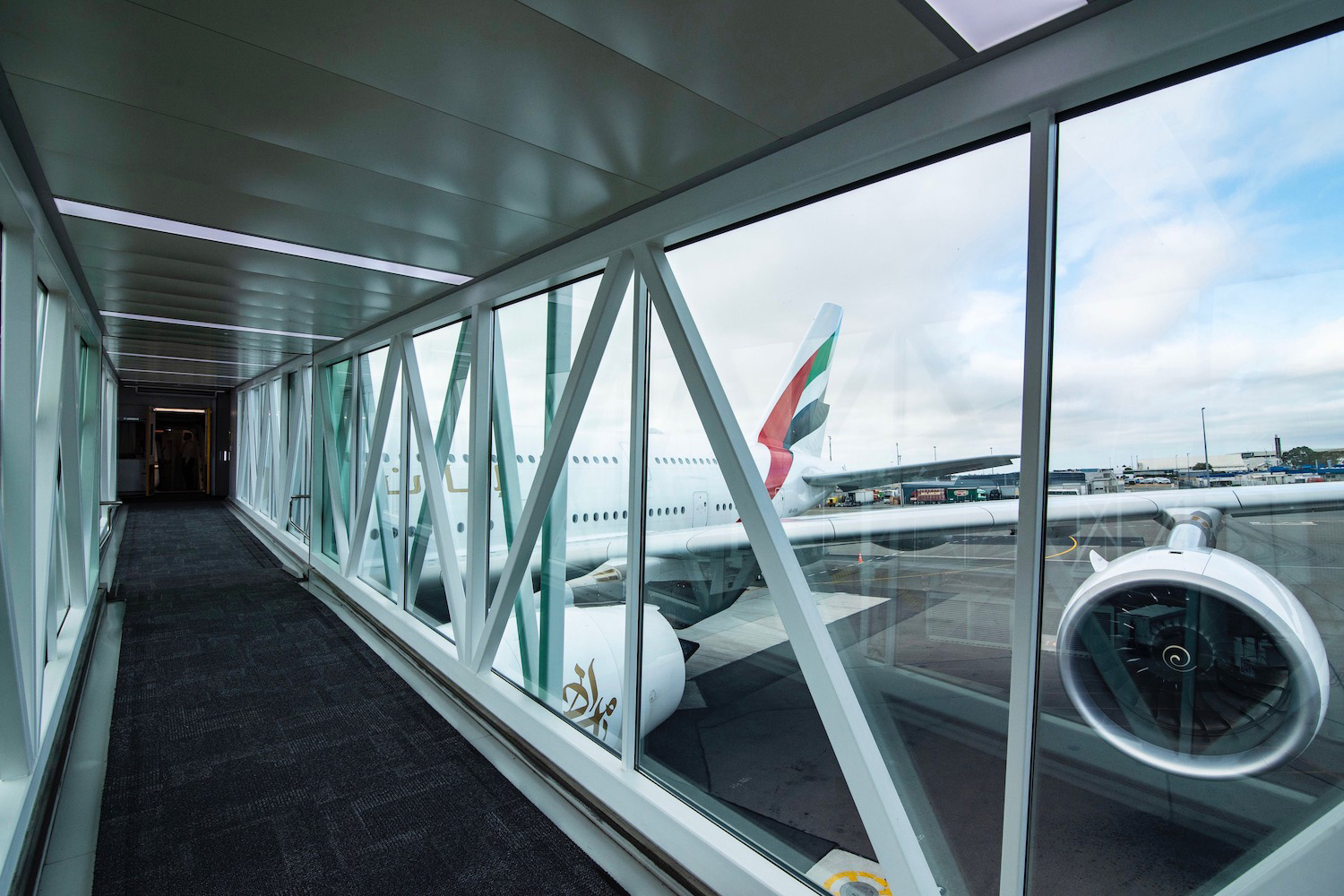 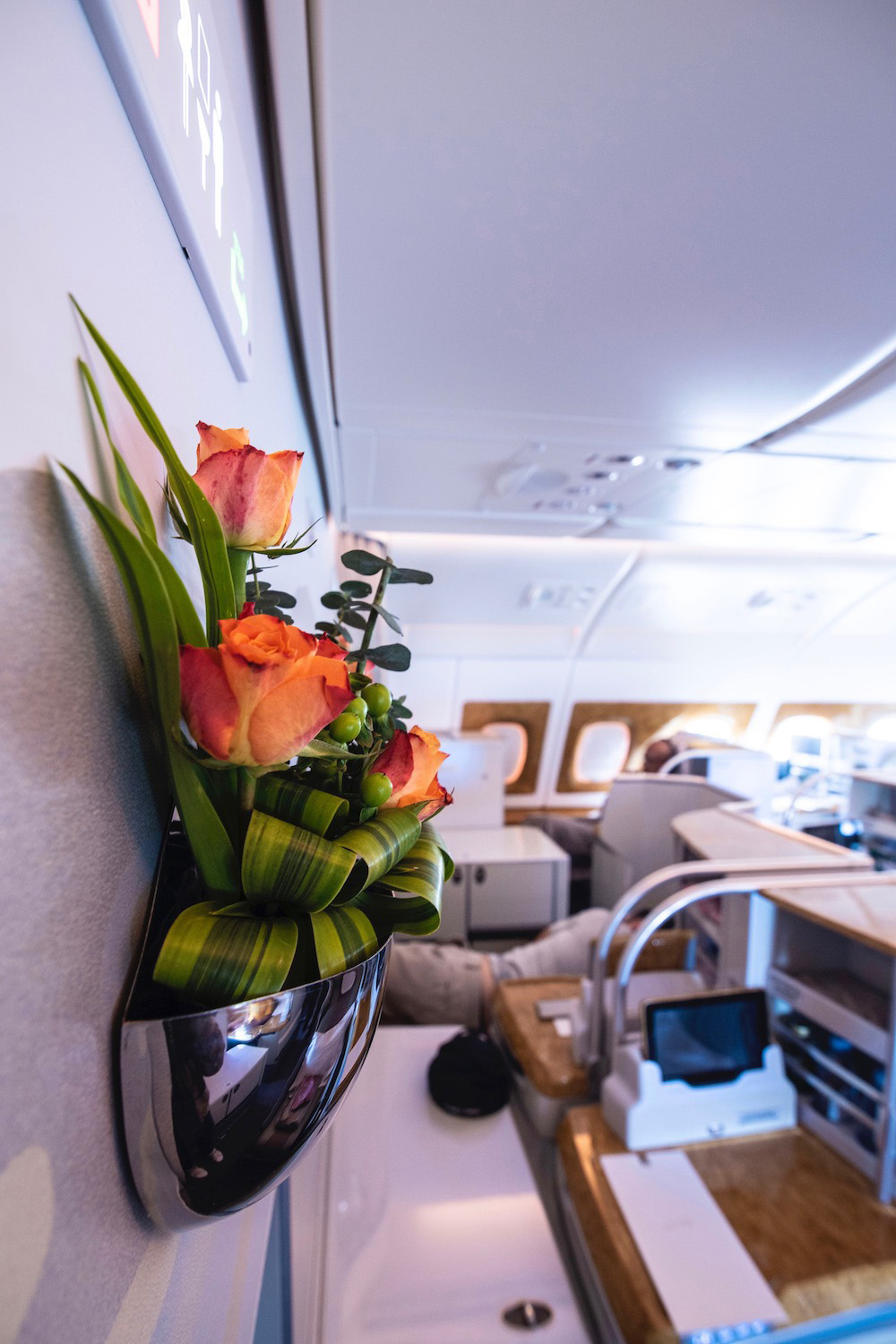 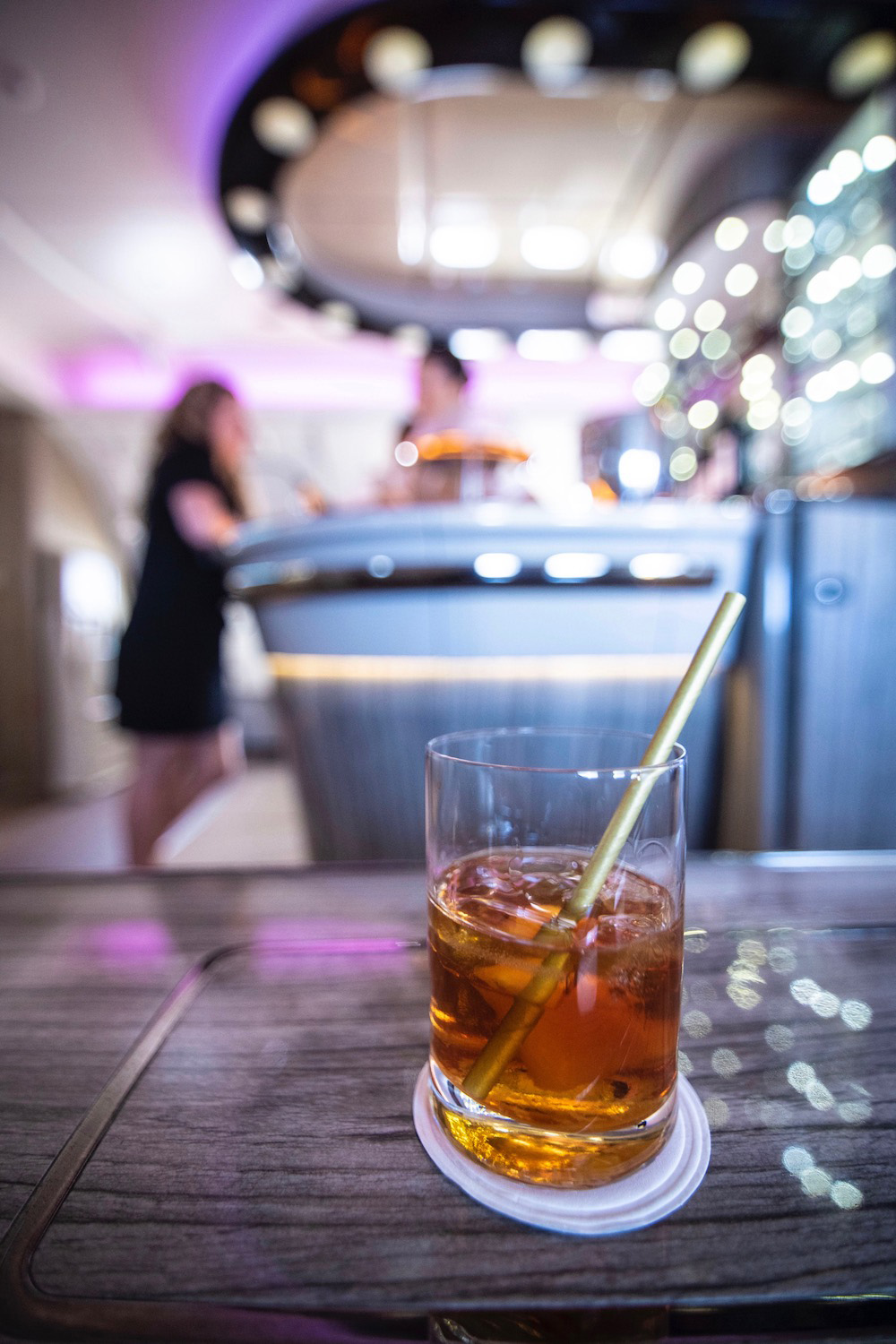 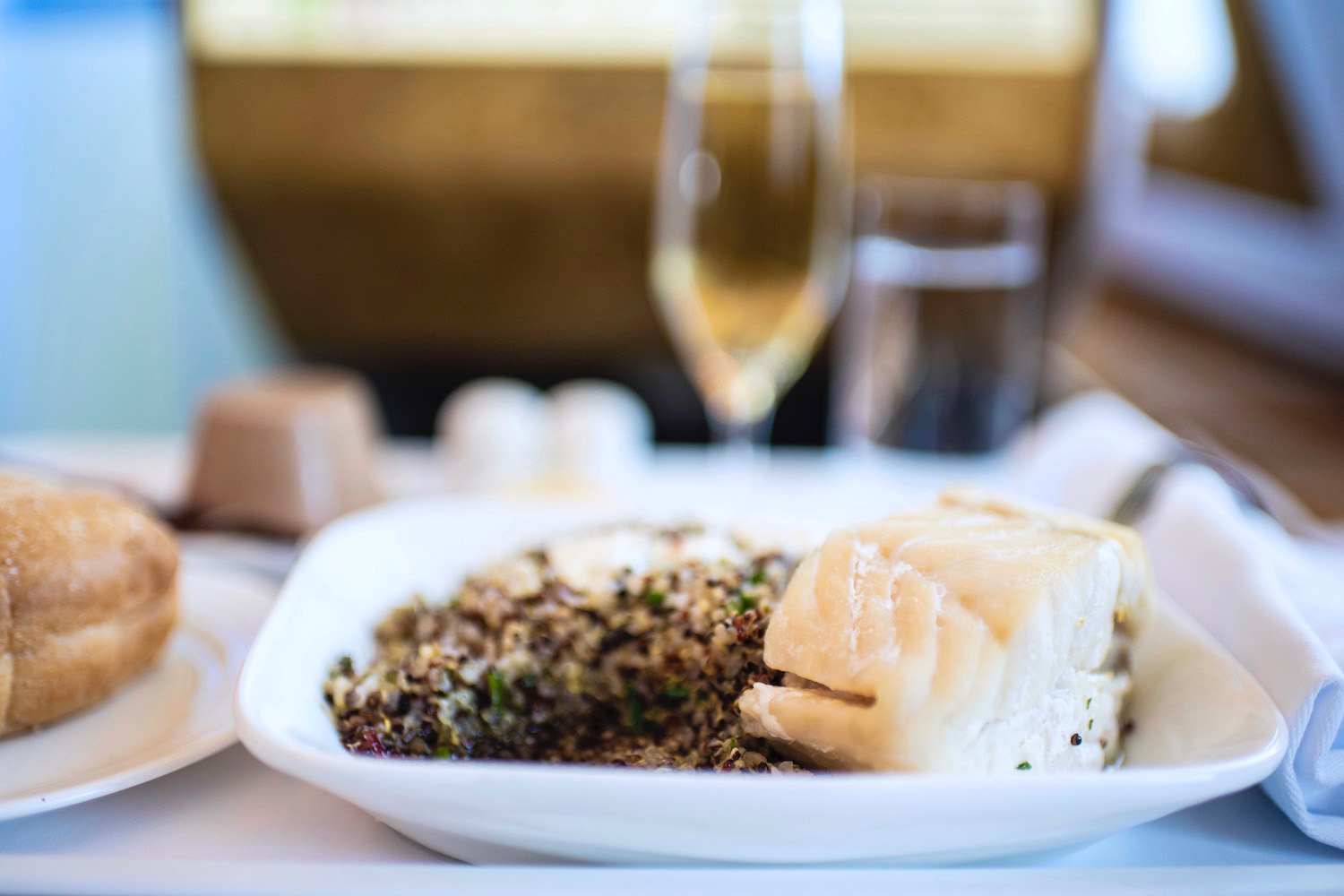 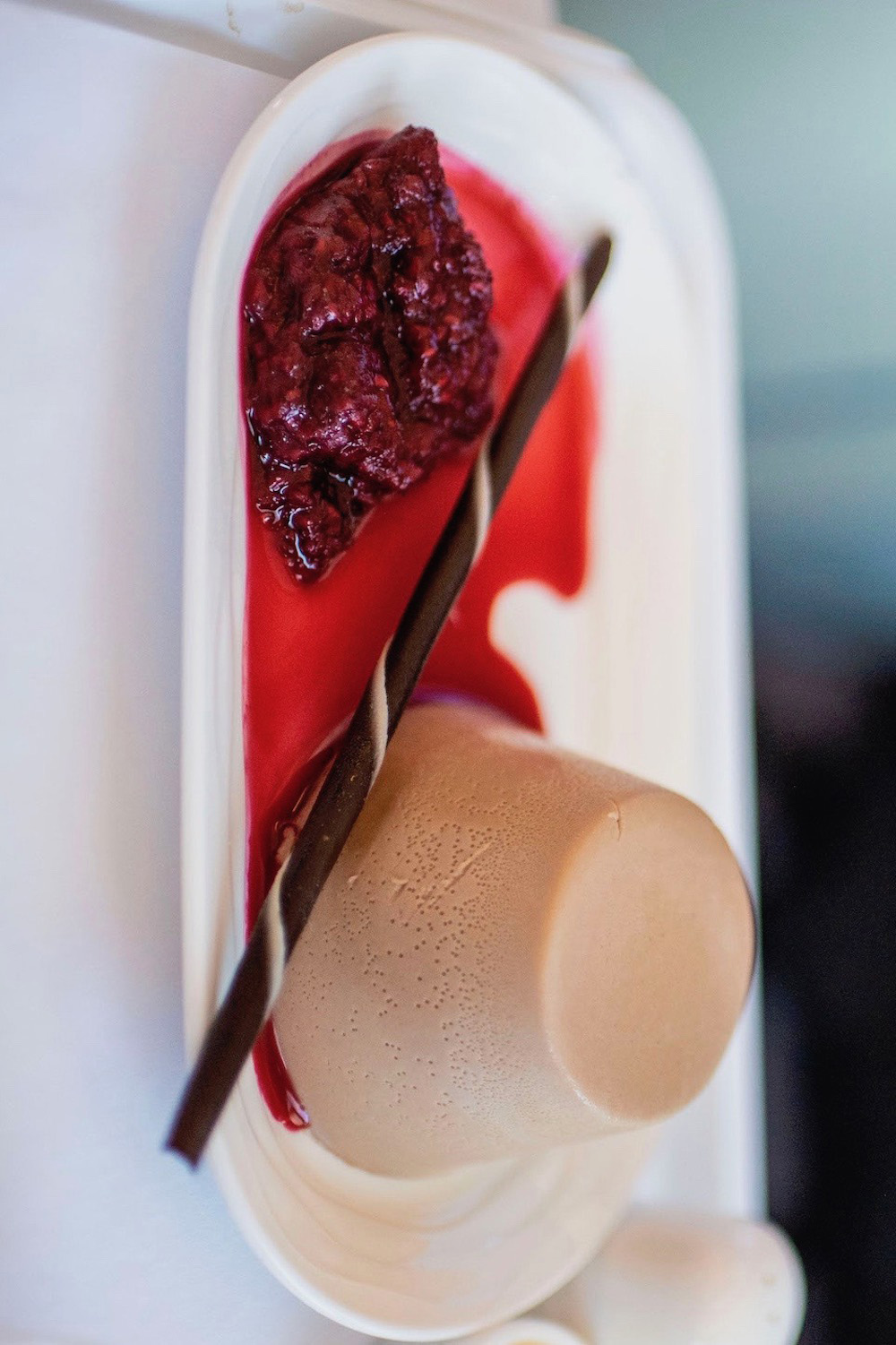 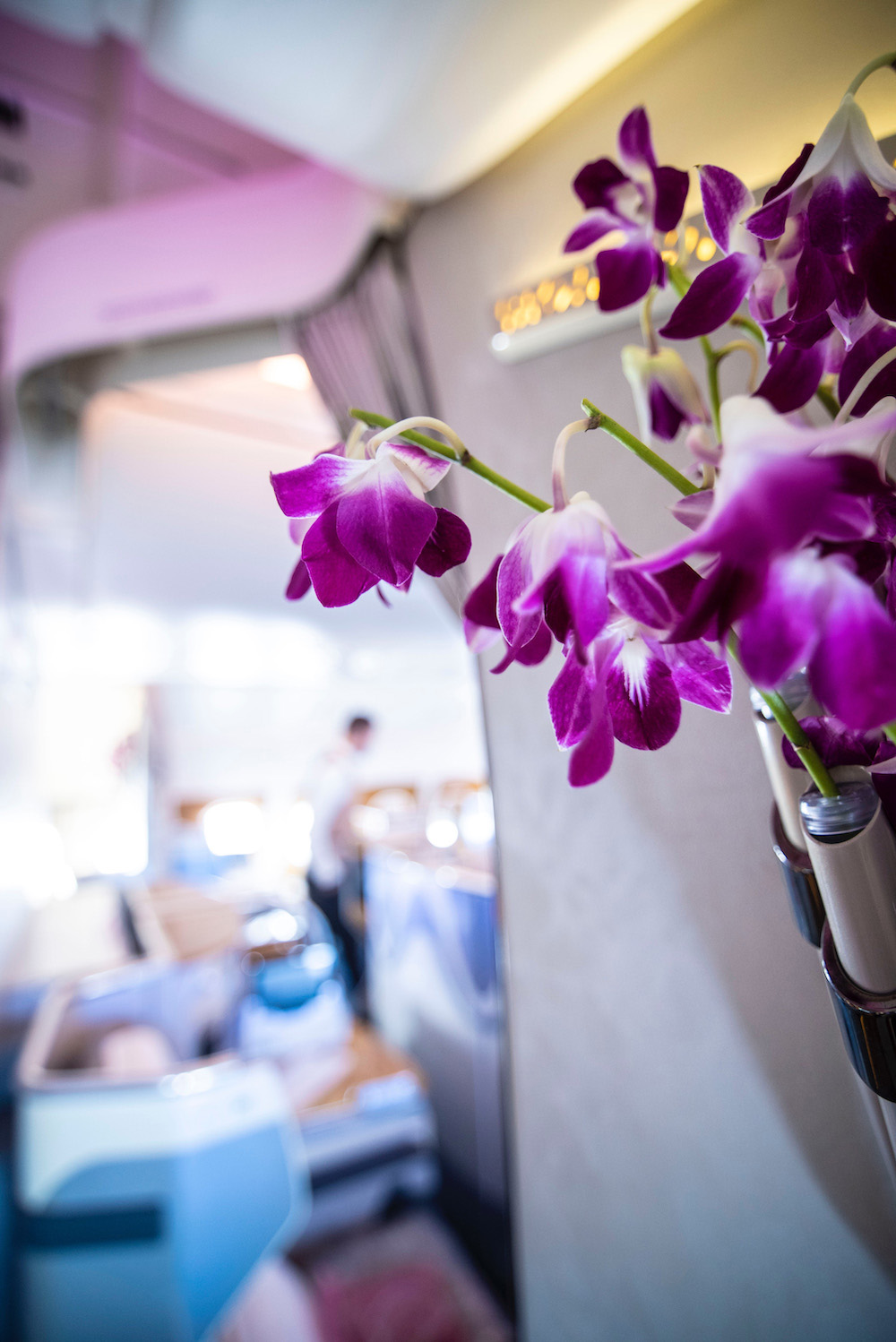 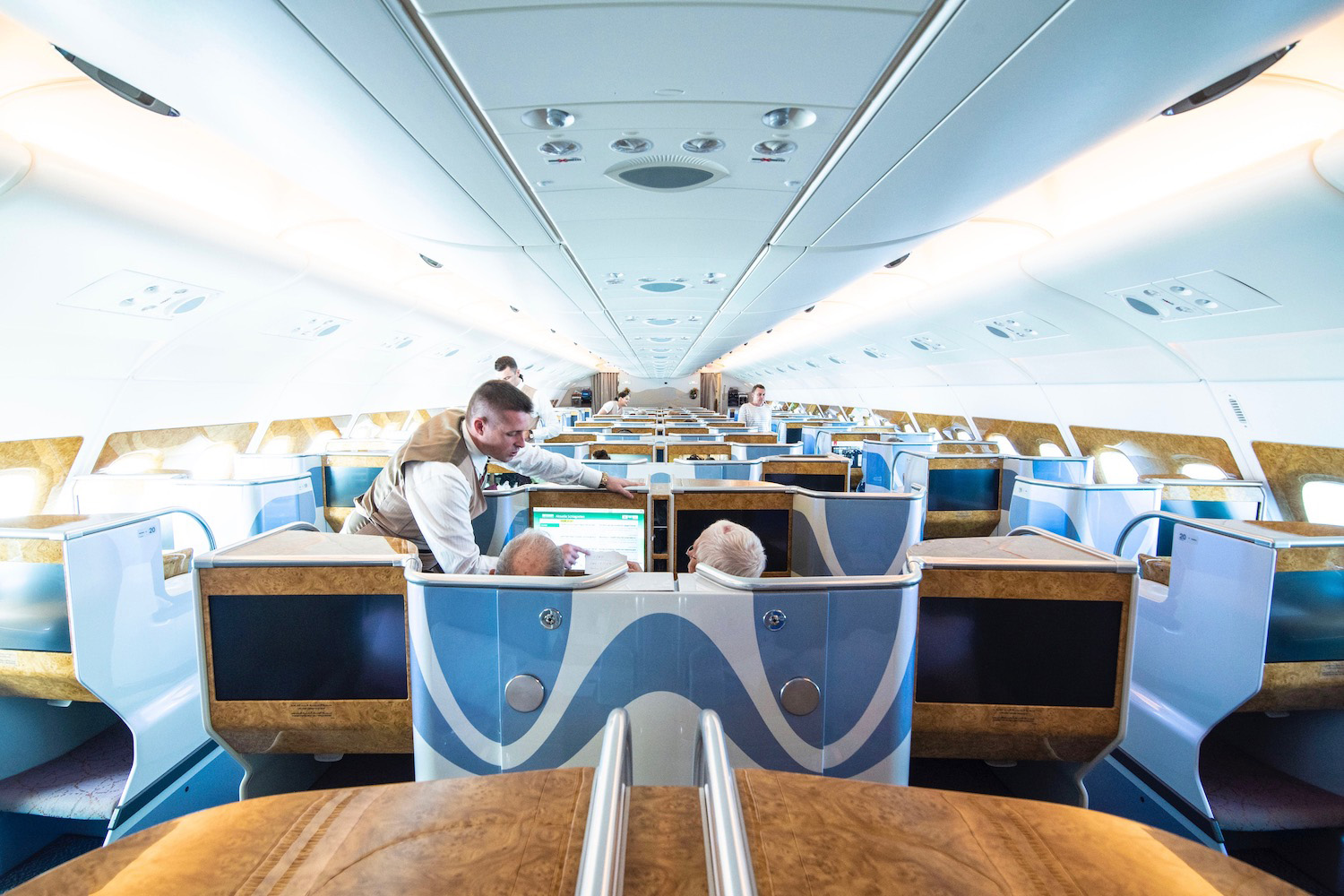 As you can see, while the cabin is somewhat gaudy it’s also got its own aesthetic merits, to say nothing of the beautiful food and drink served up on-board.

Is the Emirates Upgrade Worth It?

Absolutely! Well, at least keeping in mind the relatively low price I paid at check-in. Herein lies my first piece of advice: Wait until check-in to upgrade. Even on this very short flight, the price dropped from than half, from 504 NZD to 231 NZD. Given how tired I was from my trip, I probably would’ve felt OK had I paid the higher price, but upgrading to Emirates business class was definitely worth it considering that the fee I ended up paying was less than Air New Zealand would’ve charged me for a seat, bag and meal in economy.

On the other hand, I’m not sure how much the Emirates upgrade tends to cost on long-haul flights. I’m also not sure I’d have enjoyed the flight so much had it been on the Emirates 777, whose 2-3-2 business class configuration is more like premium economy on most airlines. So I’d also say, if you’re weighing whether or not to upgrade your Emirates flight, that you should keep in mind that finer details, most importantly the aircraft type. Did you really fly Emirates business if you didn’t have a cocktail at the onboard bar?

My Emirates upgrade ended up being 100% worth it in the end, especially when you consider how little I paid for it. The Emirates business class experience exceeded my expectations in general, in spite of the gaudy cabin finishes, and because of the outstanding service and food, the fabulous onboard bar and how tired I was after my New Zealand trip. If you aren’t sure whether to upgrade your Emirates ticket or not, make sure to pay attention to the aircraft type (A380 yes; 777 maybe not), and see whether the upgrade price drops at check-in like it did for me.

Robert Schrader is a travel writer and photographer who's been roaming the world independently since 2005, writing for publications such as "CNNGo" and "Shanghaiist" along the way. His blog, Leave Your Daily Hell, provides a mix of travel advice, destination guides and personal essays covering the more esoteric aspects of life as a traveler.
Read More Share
Aspen Colorado with Kids
Epson’s WorkForce Pro ET-8700 EcoTank