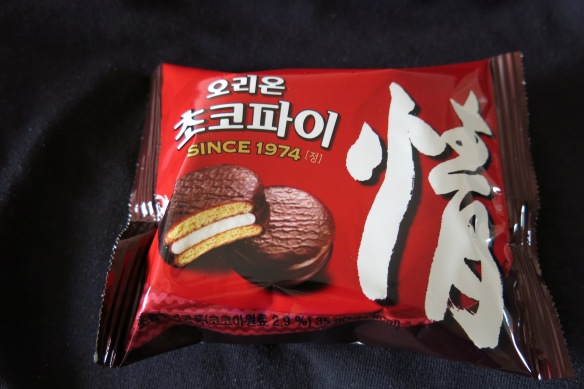 Choco Pies, the favorite treat of both Koreas

Visiting a foreign country for the first time brings a certain amount of dissonance: new sights, unfamiliar language, different dress – certainly unusual smells and unknown dishes, even vastly different ways of eating. Even a seasoned traveler who has “prepped” for a new country can be thrown by incongruent sensory inputs. Even Choco Pies.

Much as I’d heard and read about “the two Koreas” and had lived as a child growing up in Asia, I’d never visited. So I prepped with a variety of political and cultural sources, scoured travel guides for ideas of where to go, what to see. I could even identify a few palaces or temples in the wall murals as we walked through Incheon International Airport.

Nevertheless, Korea managed to wag my tail and give me a few surprises.

With echoes of Für Elise around us, within about 40 minutes we’d cleared Immigration, retrieved our bags, struggled with the ATM’s questionable English version, gave up on the free shuttle and flagged a taxi to take us to our hotel in the Incheon Peninsula. Having received some recommendations upon check in, we went in search of a restaurant. We found Mama Nin’s and stood in the anteroom, staring at the dozen or so pairs of shoes line up on the floor, then peered through the lattice door at the low –very low – tables inside. Cultural awakening blossomed.

“Oh, Jeez,” I muttered. “I forgot. We’re in Korea.” (BIG “Duh.”) “We’re supposed to take off our shoes before entering. I guess that’s why there were those slippers at the door of our bedroom.” 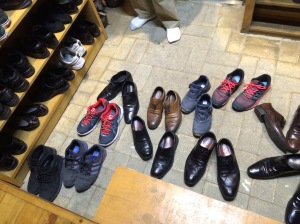 At this point, I’d been awake over 22 hours, a victim of my chronic inability to sleep on airplanes. To say I was fatigued and jetlagged wasn’t an understatement. But we were both hungry so we shucked our shoes and ungracefully lowered ourselves to the floor mats at the indicated table.

We noticed right off that our table, like all the others, featured a built-in wok. Several of our dining companions were busily stir-frying their dinners from dozens of little plates. Surveying the “English” version of the menu, we decided to order beef soup (there was a menu picture) and rice wine so as not to further embarrass ourselves as cultural morons. (Besides, neither of us could figure out the menu’s translations of various dishes, much less attempt to cook them.) 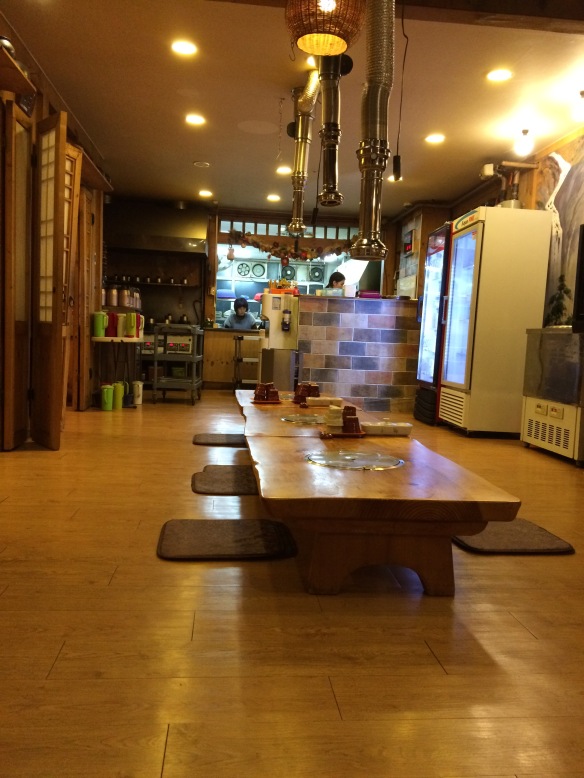 Traditional Korean restaurant. Note the flat metal disks in center of table. These are covers for the unused woks. Servers bring a pail of coals to place under wok to heat the pan for food preparation.

Meanwhile, the restaurant’s cell phone blared Für Elise with each incoming food order – and there were a lot of calls. And, nearly every person who wasn’t stuffing himself with food was staring into a cell phone – including about 7 young men who’d just been seated in one of the banquet rooms. In South Korea, which has the highest ratio of cell phones to population in the world, that’s a lot of cell phones. The combination of the non-Western restaurant ambiance and cell phones-with-Beethoven was a bit jarring.

Upon sitting at this banquet table, every man began to use his cellphone.

“Interesting décor,” I commented, looking up at the ceiling. “Those silver tubes extending from the ceiling look like they’re made of air duct piping.”

Michael glanced up and around and hissed, ”They are air ducts. For the cooking. They’re air vents for the woks. You pull them down – see?”

And as brain-dead as I was, I finally noticed some of the oblong smoke vents lowered over steaming woks. After futile attempts of claiming travel fatigue failed to wipe the smirk off Michael’s face, I steered my comments to a topic that wasn’t half as embarrassing.

“Did you know that North Koreans are crazy about Choco Pies?”

Choco Pies: the Weapon of the Wes

Choco pies have emerged as the most unpredictable weapon in the battle of the South (Korea) and the West (the U.S. and rest of the world) against the North (Korea). These innocuous, chocolate and marshmallow confections, a rip-off of the Moon Pie (sadly, an American invention), are revolutionizing the North. First introduced 10 years ago to North Korean workers as a form of wage compensation at a North-South joint venture factory in Kaesong, Choco Pies were sold or bartered by the workers for other necessities in the North. Hoarded then resold at exorbitant prices on the black market, fetching as much as $10 apiece – a veritable fortune in the impoverished North – Choco Pies became a dominant form of “currency,” and turned the North Korean economy on its ear.

Rise of the Choco Pie

The story behind the Choco Pie is so wonderfully a combination of capitalism and Korean culture and politics.

A visiting Korean businessman fell in love with Moon pies in a visit to the U.S.; this gustatory rapture spawned an “Ah ha!” moment, and by 1974 the Orion Company was manufacturing the confection in South Korea. Called “Choco Pies” in attempts to ward off yet another round of patent infringement accusations from Best Bud U.S., these chocolate covered cookies with a marshmallow filling became a huge hit among South Koreans. 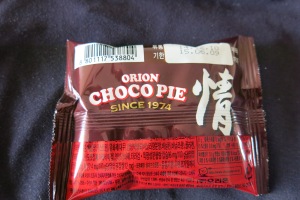 Choco Pie, the brain child of Orion. Sound like “Oreo” to anyone?

Spin the dials forward to 2004: the two Koreas agreed to a joint manufacturing-industrial venture in Kaesong, NK, with the North supplying the labor and the South the facilities and managerial know-how. The Pyongyang (Northern) government selected almost exclusively women to work in these factories, with strict limitations on the amount of exposure and interchange with the South Korean managers. Moreover, the North wouldn’t allow the South to pay the workers directly, requiring the wages earned be remitted to the North to then be distributed to the workers. However, the Pyongyang government only paid their people about two-thirds of their earnings. The Southern managers began using Choco Pies as bonuses and incentives in 2005, and as the workers developed a taste for the treats, increased the number of cookies per day to as many as 20 per worker.

The women began to realize that if they loved the Choco Pies, their literally famished compatriots would as well. Thus began the illicit Coco Pie black market that nearly ruined the North Korean economy, such as it had devolved. Within five years, Pyongyang had denounced Choco Pies and closed down their “cooperative” involvement in the Kaesang experiment. By 2014, Kim Jong-un had banned Choco Pies.

The South Shall Rise Again

Not to be outdone by the North’s ban on their favorite, now politically-viral treat, South Korean activists, in response to the ban, sent airlifts of 10,000 Choco Pies to their northern brethren via helium balloons. (They also put anti-Pyongyang pamplets and other tasty goodies in the “gift” baskets.) A recent “airlift” received quite a bit of attention in the Western press. (Personally, I think the press was intrigued by these condom-shaped balloons, reminiscent of Woody Allen’s movie Everything You Wanted to Know About Sex. But maybe that’s just me.)

I can’t really imagine how horror-struck the retro hard-line government of Pyongyang must have been, seeing thousands of Choco Pies raining down on North Korea. If only South Korean ingenuity can be properly matched with Western dollars or euros or yen and plenty of Choco Pies as ammunition, there finally might be a downfall of the most repressive government existing today. One can only hope.

Note: The whole Choco Pie story is real. Just Google this confection and you’ll find it all. If you’re interested about how the North Korean government operates and still manages to exist, read The Impossible State: North Korea, Past and Future by Victor Cha.

The coda to this tale is that once in Korea, I embarked on a quest for a Choco Pie. One disgusting bite later, I had a hard time understanding Koreans’ fanaticism for this “treat.” Michael, on the other hand, finished it off, no problem.

I think I’ll leave Choco Pies to the Koreans.

Carol Barbier Rolnick grew up in Japan and Southeast Asia, traveling extensively as a child through Asia, the Mideast and Europe on family vacations. Travel has continued as a priority through raising kids and continuing into retirement, extending adventures through the Americas, southern Africa, Asia, and repeat trips throughout Europe. Carol and her husband, Michael spent four summers based in Utrecht, The Netherlands, which has become like a second home. They are (still) aiming towards Australia-New Zealand and Antarctica to round off their continental travels.
Read More Share
Summer Skies with Drama in the South African Bush
The South African Rolling Hills of Elgin, a Young Wine Route