The Republic of Botswana (Tswana: Lefatshe la Botswana) is a landlocked country in Southern Africa. The citizens are referred to as “Batswana” (singular: Motswana). Formerly the British protectorate of Bechuanaland, Botswana adopted its new name after becoming independent within the Commonwealth on 30 September 1966. It has held free and fair democratic elections since independence.

Geographically the country is flat and up to 70% of Botswana is covered by the Kalahari Desert. It is bordered by South Africa to the south and southeast, Namibia to the west and north, and Zimbabwe to the northeast. It meets Zambia at a single point.

Botswana is one of the world’s great development success stories. A small, landlocked country of 1.9 million people, Botswana was one of the poorest countries in Africa with a GDP per capita of about US$70 at independence from Britain in 1966. In the four decades following independence, Botswana has transformed itself, moving into the ranks of middle-income status to become one of the fastest growing economies in the world with its average annual growth rate of about 9 percent.

Botswana’s impressive track record of good governance and economic growth supported by prudent macroeconomic and fiscal management, stands in contrast to the country’s still high levels of poverty and inequality and generally low human development indicators. While Botswana’s economic progress over the past forty years has significantly raised living standards for about two-thirds of the population, a third or more of its people have been left behind. While education expenditure is high at 10 percent of GDP and significant educational achievements have been attained, including the provision of nearly universal and free education, overall outcomes have not created the skills and workforce Botswana needs. Unemployment has been persistently high at near 20 percent, household incomes are much lower in rural than in urban areas (HIES 2002/03), and, while rural poverty rates have fallen, they remain significantly higher than in urban areas. As a consequence, income inequality in Botswana is one of the highest in the world. The HIV/AIDS pandemic has further exacerbated the situation: the country now suffers from the second highest HIV/AIDS adult prevalence rate in the world, and education and health outcomes are below those of countries in the same income group.

San (Bushmen) were the aboriginal inhabitants of what is now Botswana, but they constitute only a small portion of the population today. The Tswana supplanted the San, who remained as subjects. Beginning in the 1820s, the region was disrupted by the expansion of the Zulu and their offshoot, the Ndebele. However, Khama II, chief of the Ngwato (the largest Tswana nation), curbed the depredations of the Ndebele and established a fairly unified state.

A new threat arose in the late 19th century with the incursion of Boers (Afrikaners) from neighboring Transvaal. After gold was discovered in the region in 1867, the Transvaal government sought to annex parts of Botswana. Although the British forbade annexation, the Boers continued to encroach on native lands during the 1870s and 80s. German colonial expansion in South West Africa (Namibia) caused the British to reexamine their policies, and, urged on by Khama III, they established (1884-85) a protectorate called Bechuanaland. The southern part of the area was incorporated into Cape Colony in 1895. Until 1961, Bechuanaland was administered by a resident commissioner at Mafikeng, in South Africa, who was responsible to the British high commissioner for South Africa.

Britain provided for the eventual transfer of Bechuanaland to the Union of South Africa; in succeeding years, however, South Africa’s attempts at annexation were countered by British insistence that Bechuanaland’s inhabitants first be consulted. The rise of the National party in South Africa in 1948 and its pursuit of apartheid turned British opinion against the incorporation of Bechuanaland into South Africa. Although Bechuanaland spawned no nationalist movement, Britain granted it internal self-government in 1965 and full independence as Botswana on Sept. 30, 1966. Shortly after, Botswana became a member of the United Nations. Seretse Khama, grandson of Khama III, was elected the first president, and served until his death in 1980, when he was succeeded by Dr. Quett Ketumile Joni Masire.

President Masire resigned in 1998 and was succeeded by his vice president, Festus Gontebanye Mogae. Mogae won election to the presidency in 1999, after the BDP retained its hold on the national assembly. The BDP remained in power after the October 2004, national assembly elections, and Mogae was subsequently reelected president. In April 2008, Mogae resigned and was succeeded as president by Vice President Seretse Khama Ian Khama, son of Botswana’s first president. Despite some unhappiness with Khama among BDP members, the party faced a divided opposition and again won the national assembly elections in October 2009, and Khama was then elected to a full term.

Besides referring to the language of the dominant people groups in Botswana, Setswana is the adjective used to describe the rich cultural traditions of the Batswana-whether construed as members of the Tswana ethnic groups or of all citizens of Botswana. The Scottish writer, Alexander McCall Smith, has written a number of popular novels about Botswana that entertain as well as inform the reader about the culture and customs of Botswana. Tswana music is mostly vocal and performed without drums; it also makes heavy use of string instruments. In the northern part of Botswana, women in the villages of Etsha and Gumare are noted for their skill at craftingbaskets from Mokola Palm and local dyes. In addition to these more traditional arts there are a number of extremely talented artists who use modern means to express themselves.

Despite the increased importance of mining in the Botswanan economy, unemployment has been a problem since the 1970s, as subsistence farming has become less profitable and migrant workers have returned from the South African mines in search of work. The only known minerals in the country at the time of independence were manganese and some gold and asbestos, but significant diamond, coal, nickel, and copper deposits have since been found, as well as salt, soda ash, and potash. Botswana’s diamond mines collectively make up one of the largest diamond reserves in the world, with stones mined by the government and a South African mining concern. The revenue earned from diamonds has underwritten national health-care and educational programs, and now drives Botswana’s economy. 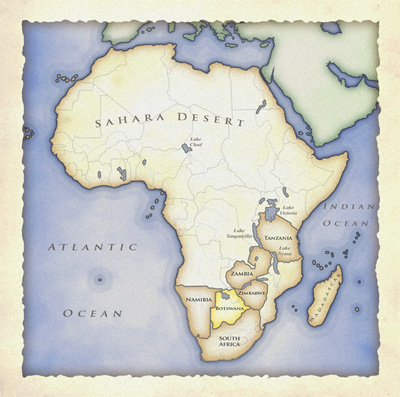