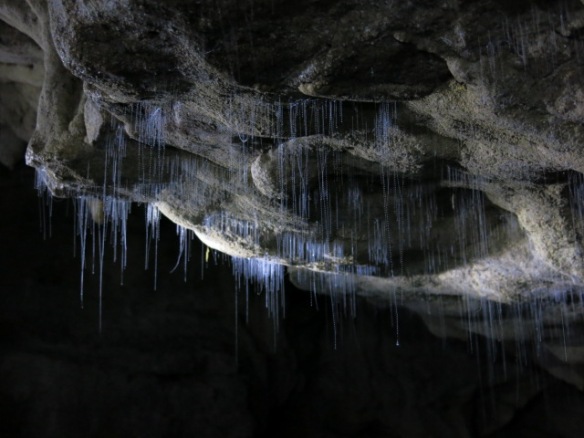 The only glow worm photo I was allowed to take before we descended into total darkness for our subterranean rafting through the cave. This photo gives a better idea of the gossamer thin threads spun by the glow worms.

“You wouldn’t pay to come if we told you the caves were full of maggots so we call them ‘glow worms’,” said our guide. True enough. But in reality, the glowing strings from the larvae of the insect called arachnacampa luminosa are magnificent to behold, even if the larvae look just like slimy caterpillars. 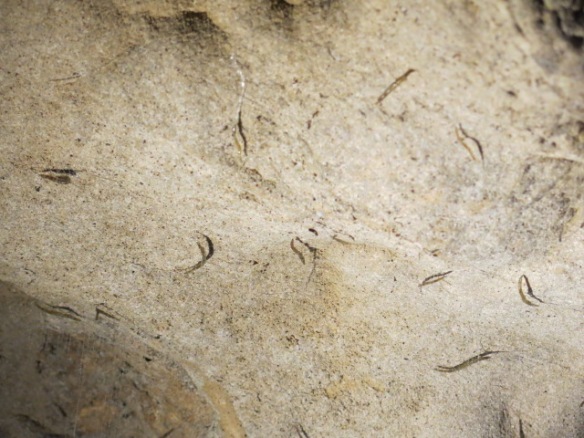 Our blessedly small group of eleven headed for Mangawhitikau cave, a privately owned cave, and at 7 km long the longest cave in New Zealand. (In New Zealand, whoever owns the surface of the land also holds the rights to anything below and in the earth beneath.) About 200 meters into our first foray into Mangawhitikau we stopped to marvel over the silken, luminescent strings of a few dozen glow worms. Later, our group of eleven sat spellbound in a raft as the guide towed us down a subterranean river, through a small cavern carpeted with blue-green points of luminescence.  In the complete darkness (no headlamps, no cameras, no talking) it was easy to feel disembodied and imagine we floated through a strange, magical new universe. The only sound came from a waterfall gurgling loudly at the end of the underground river. 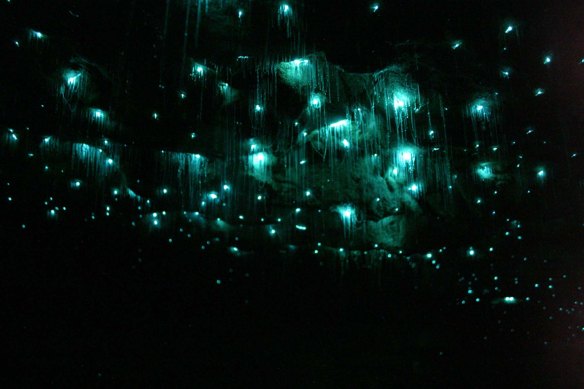 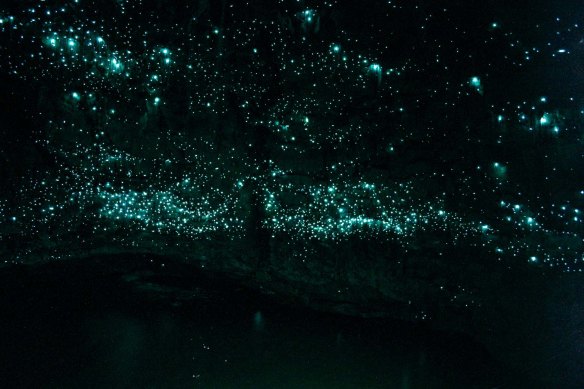 Glow worms on the cavern roof — a galaxy of “stars.” Photo by Spellbound.

As mesmerizing as the glow worms were, we learned that these larvae – a halfway phase in the insect’s life – had a very basic purpose for their glow: survival. Their light is the product of a biochemical reaction called bioluminescence. The silk threads spun by the larvae hang like glowing, sticky strands of a curtain to catch other insects for food.

Thus, the larvae act somewhat between an insect and a spider: the glowing strands use the light to attract insect prey, and the stickiness of the threads trap the hapless prey as a spider’s web. Yet, similar to other insects, the larvae eventually spin themselves into a pupae, from which they eventually emerge as adults to start the procreative process once again. We learned that while these glowing larvae can be found in dark corners of the forest, they thrive best in caves, and can be found in subterranean chambers throughout New Zealand. 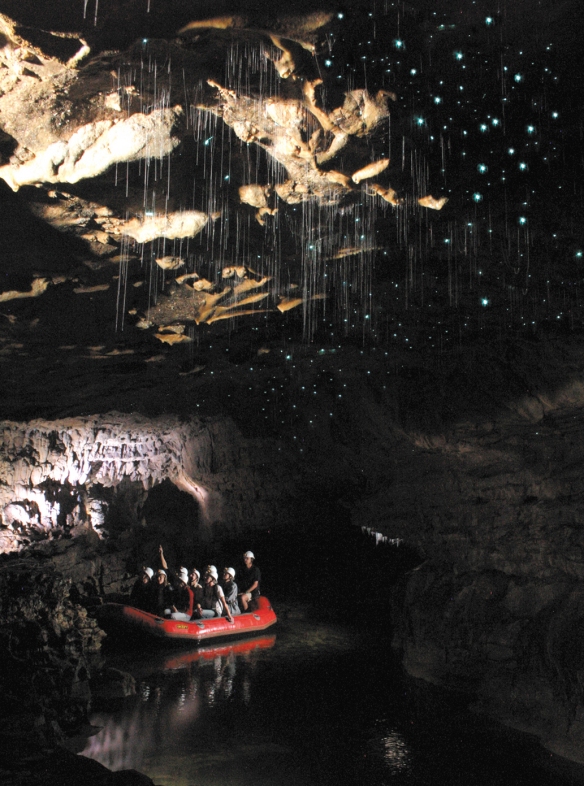 We took a hugely different half-day rafting trip down the Tongariro River south of Lake Taupo (pronounced “toe-paw”: 3 hours, 14 km and 52 Class 3 rapids later we were exhausted but exhilarated. As you can see we got soaked, but it was great fun. Remarkably, the Tongariro is so pure you can drink directly from it — which we did. Lovely, fresh,, clear water! We highly recommend the group we went with, Rafting New Zealand. 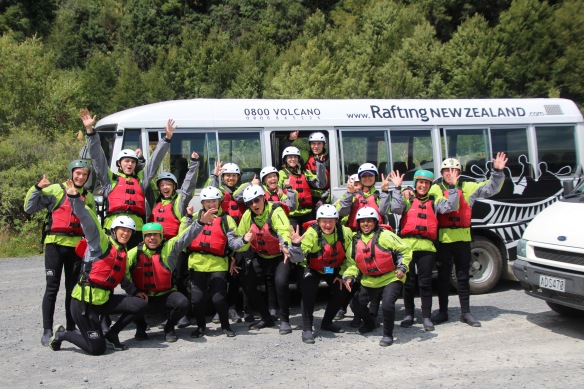 Getting ready to rock the Tongariro. We were a mixed group from the UK, Australia, US, Germany, Sweden, and, of course, New Zealanders. 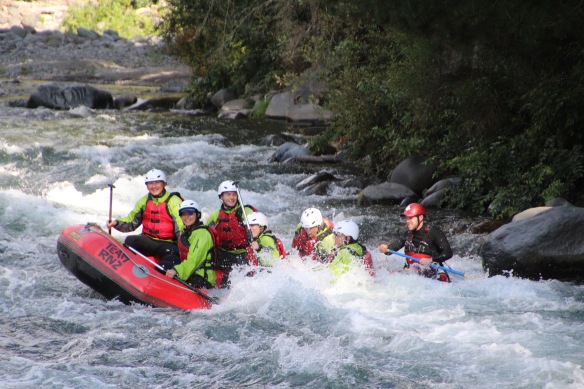 Michael & I are the two in front of the guide in the stern, just as the rapids swamped us. 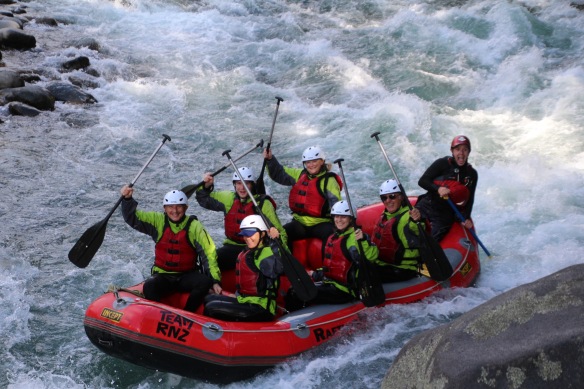 Near the end of the rapids, nearly 14 kilometers and 52 rapids under our belt. Good reason to celebrate! Carol Barbier Rolnick grew up in Japan and Southeast Asia, traveling extensively as a child through Asia, the Mideast and Europe on family vacations. Travel has continued as a priority through raising kids and continuing into retirement, extending adventures through the Americas, southern Africa, Asia, and repeat trips throughout Europe. Carol and her husband, Michael spent four summers based in Utrecht, The Netherlands, which has become like a second home. They are (still) aiming towards Australia-New Zealand and Antarctica to round off their continental travels.
Read More Share
Around the World with All Things Cheese….
TEDxBerkeley 2016 Helps the World Find X Thru 16 Riveting Talks

One Response to Rafting with Glow Worms in New Zealand