On our third and final day of our Lake Titicaca trip in Bolivia, Daniella, Omar, Miro and I set out to visit a very special pueblo, not commonly found on the tourist track. Because Daniella and Omar knew that Miro and I value authentic cultural experiences on our travels, they wanted to share Sampaya, a very special place with us.

Sampaya is an Aymara community that retains its customs and traditions from ancient times. It is located 18 km. from Copacabana on the peninsula, reached 45 minutes by car or 4 hours on foot. We arranged for a taxi to take us to Sampaya and wait for us while we explored the town for a few hours.

The dusty road took us through a rural landscape up and over several mountains and into a place where time stood still.

We reached Sampaya and immediately became aware we at a place filled with magic, a place where time stood still. Sampaya was a living history, a testimony of a culture that had deep roots to an ancient world. Miro and I looked around with awe as we both felt as we were transported back in time. 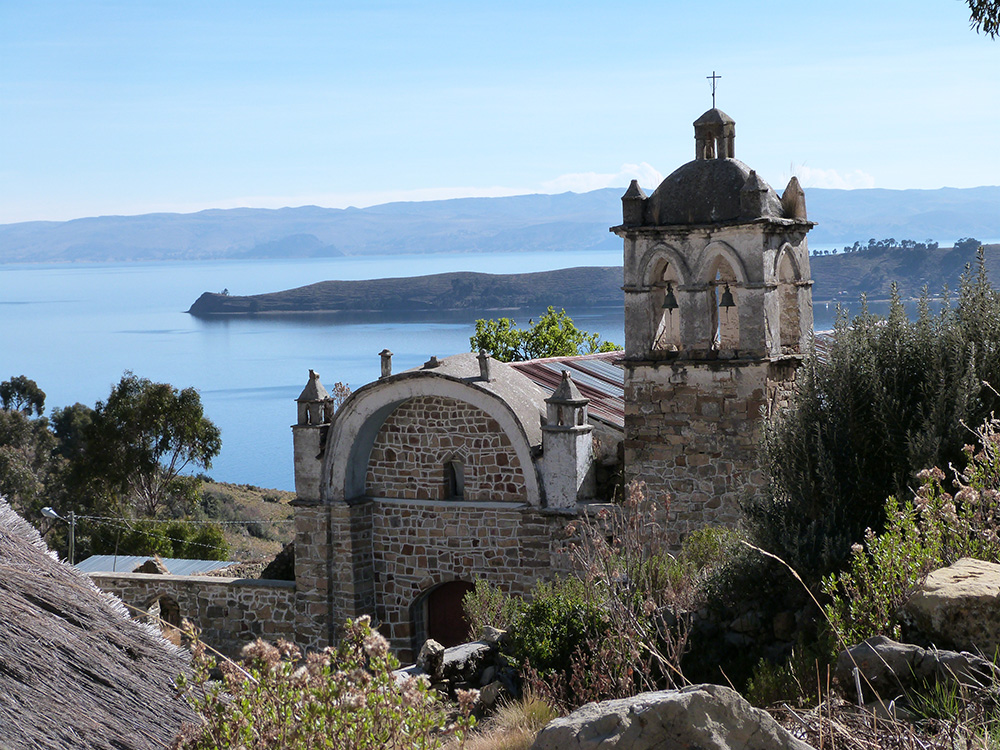 There was the grand church marking the entrance to the village and an ancient cemetery just before the entrance to the pueblo. The stone houses dotted the slopes of Sampaya along both sides of the valley, following invisible topographical lines that reminded us of Inca crop terraces. The houses boast cold stone walls and joints fitted with mud mortar masonry. Some roofs were comprised of gabled structures formed by tree trunks, dry straw and leather cords. Other rooves have replaced the natural materials with a more modern corrugated tin.

The winding streets tiled with flat stones were only large enough for pedestrian traffic. Everywhere you looked, you could see small Kantutas trees which bloomed Bolivia’s national flower. The breeze from the lake swept through town, shaking the trees as if to offer a sense of presence in this otherwise empty town. Sampaya was beautiful and Sampaya was eerily quiet. 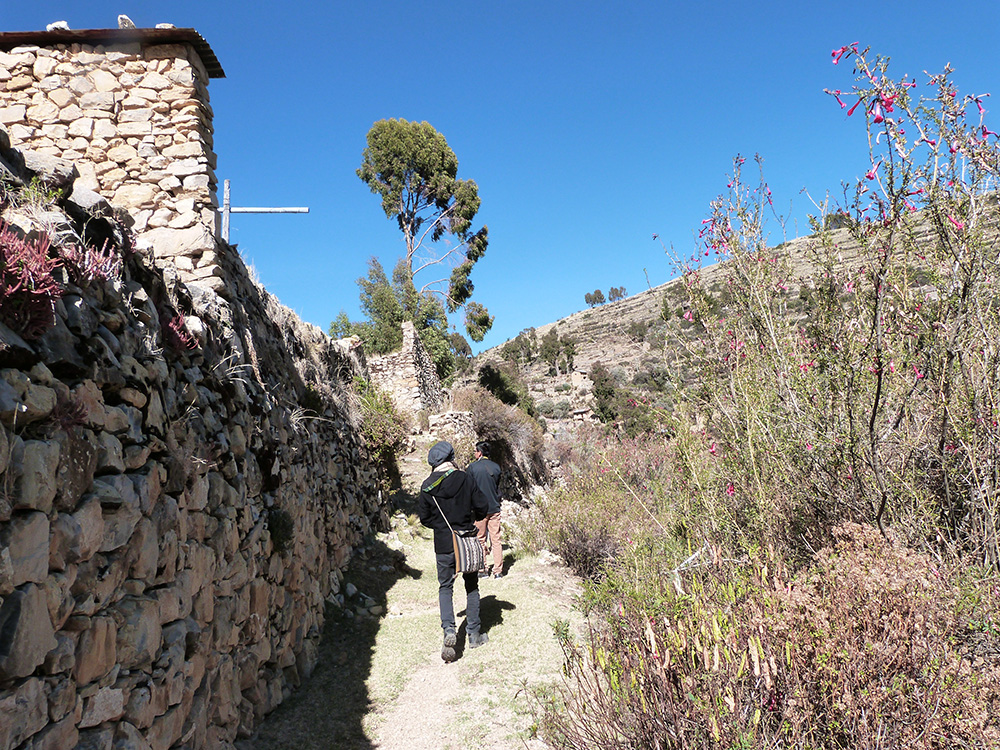 We started down a foot path on the south side of the town Omar knew well. The four of us walked in silence, Miro and I were in awe of the visions around us, Daniella and Omar seemingly deep in thought. After a fifteen minute incline we reached the merging of two paths forming a fork in the road. This was the corner where Omar’s grandmother had lived her life. She had died within the last decade and the house had since remained vacant. Locked with small padlocks, Omar said a variety of family members periodically visit the house and spend one or two nights at the Lake. Besides those time, the house remains vacant. 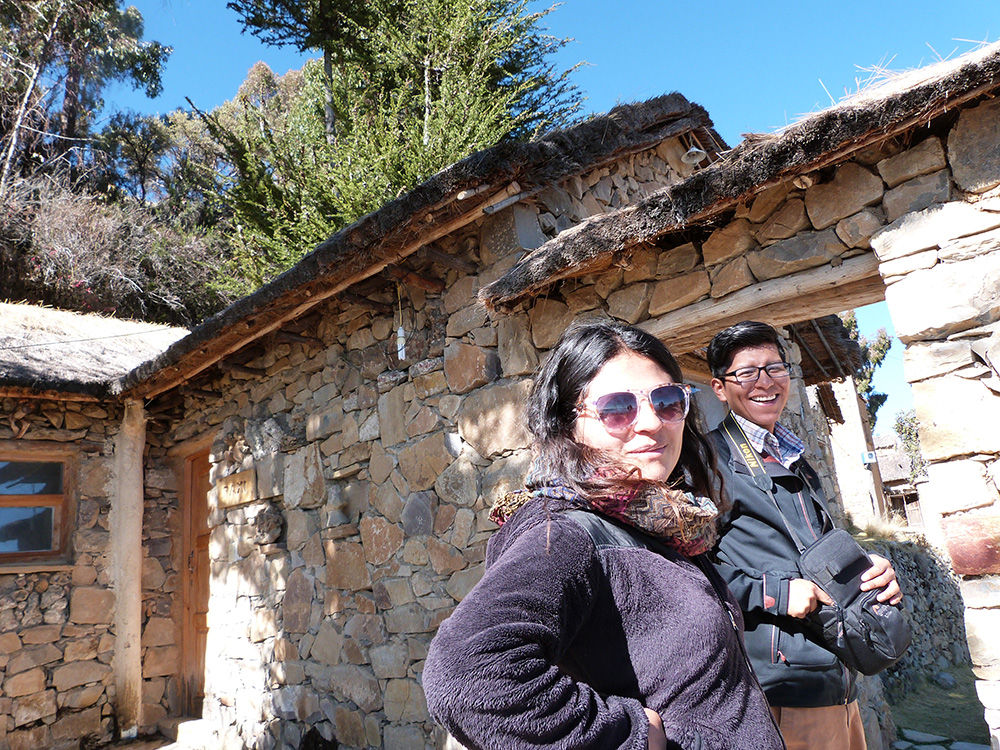 Omar shared stories from his childhood, visiting his grandmother house along with his cousins. Each time the boys arrived, Omar and his cousins knew they would be required to transport water in from the town’s well into colorful buckets in order to provide water for washing and bathing during their stay. Omar told stories of the group running down to the shore, picking samples of the farmer’s yield and snacking on fresh fruit and vegetables down by the shore. Through these stories, Miro and I experienced a part of Omar’s history, and knew immediately that Sampaya was a special place to our guide. 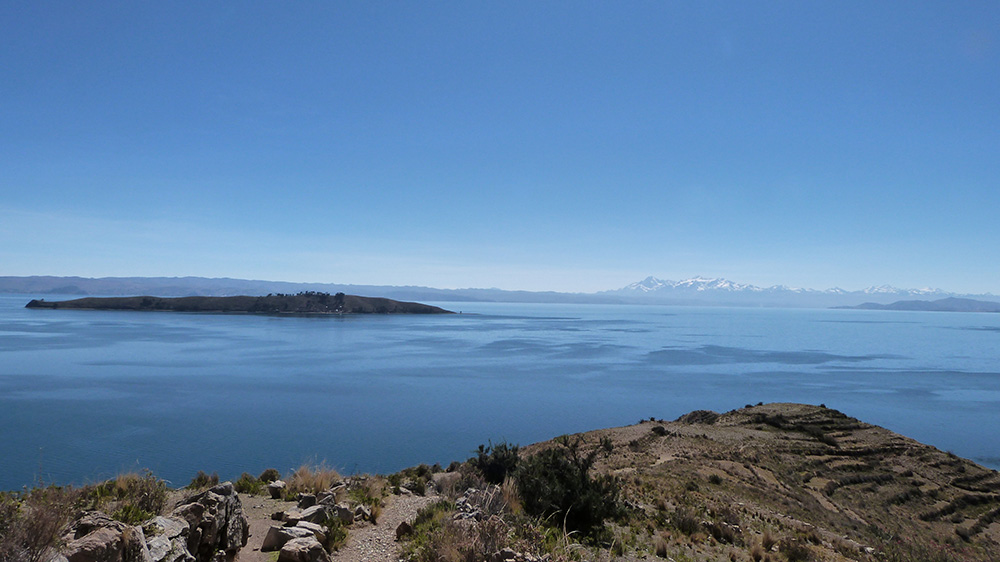 Sampaya rests in a small valley on the shore of Lake Titicaca and is surrounded by the populated islands Isla del Sol in the distance and and directly ahead Isla de Luna, known as “Koati” by the Aymara locals. From the vista, you can see a magical spectacle of Andean glaciers across the horizon.

In pre-Colombian times, the highlands surrounding Lake Titicaca were divided into Aymara communities, forming such towns as Sampaya, Lupacas, Collas, Omasuyos, Pacajes, among others. The Aymara communities formed around the lake were considered sacred within their religious beliefs.

From Sampaya stopped at the time of the Inca

“In the 19th century, the famous Explorer and German archaeologist Friedrich Uhle reached Sampaya in search of a quipus, but instead bought a resalipichis from Serapio Chuquimira, Aymara chronicler of the town. The resalipichis were some leathers painted with simple sepia color figurines that conformed a hieroglyphic writing to display Christian prayers. That object is now preserved in the Ethnological Museum of Berlin.”

Daniela, Omar, Miro and I wandered around the village for the next several hours. We crossed over a small, almost dry river running through the center of the valley. Omar said when he was a child he remembers that river rich with flowing water, running from a natural spring below. Now, he fears within 10 year the river will be dry. 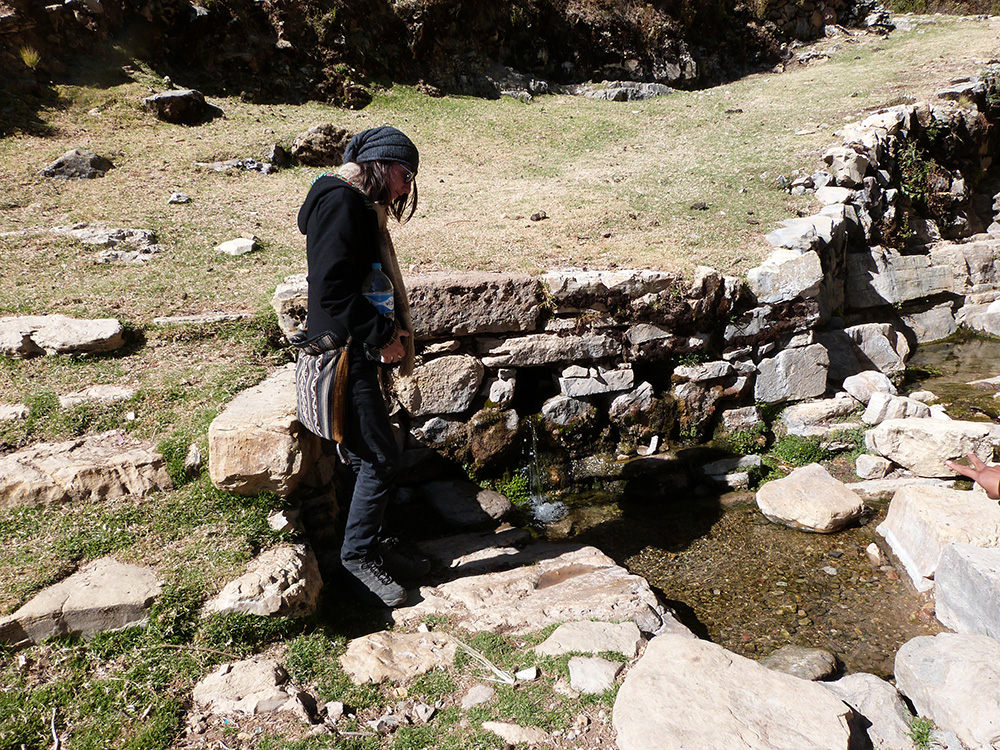 During our visit, we encountered four other people. Three were farmers heading to the fields. The two women in their full skirts and traditional hats looked like they were in their early fifties. They were carrying heavy pouches on their backs, as they scurried past us on the trail. The man that accompanied them appeared to be a few years younger, but it was difficult to be sure. 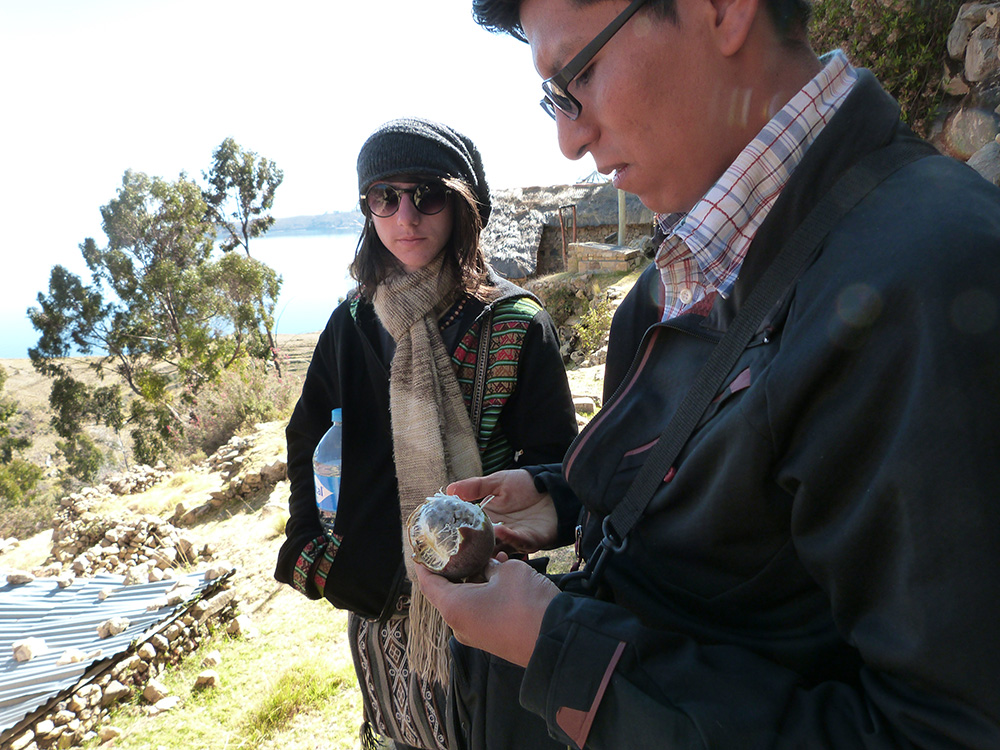 About fifteen minutes later, we met another man on the footpath. He seemed surprised to see us and smiled at us which felt welcoming. We all stopped on the path to chat for a few minutes. He asked if we were visiting and what we thought of his pueblo. We all said we were enjoying our visit. I asked him how many residents lived in this beautiful settlement. He replied that only 42 families were left and said the average age was between 45 and 50 years, which included the 15 children that went to school in Sampaya’s small schoolhouse. Then, he wished us a lovely visit and continued on his way. 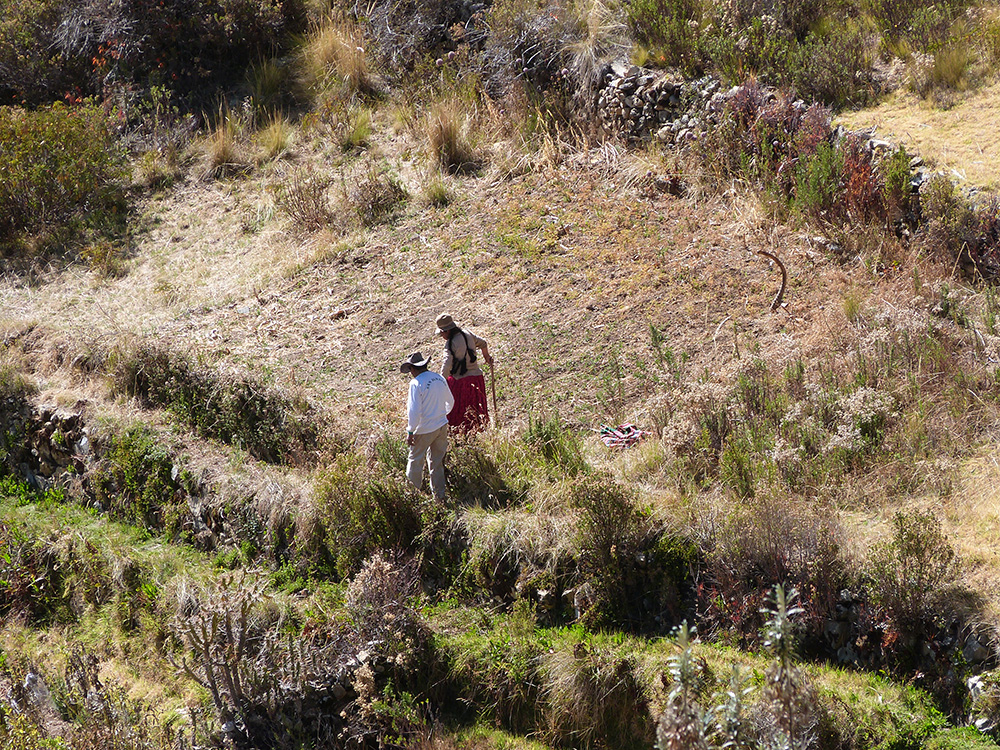 Miro and I were stunned. There were at least 200 or more houses we observed throughout our walk through Sampaya. With only forty two families living in the pueblo, most of the village was left vacant. Omar explained, that although the town had major upgrades and within the last ten as plumbing brought fresh water into the houses, and electricity was finally installed, still most of the younger families left to live in the larger cities for work, education and the idea of progress as an adaption to a more modern world.

It is difficult to accurately describe the experience of visiting Sampaya. Miro and I felt the magic of the place, a direct contact into the roots of a people with ancient roots, a place where the ancient codes were still practiced, living in harmony with their surroundings. A place time forgot. Sampaya is a place where ancestral traditions thrive and mystical and spiritual practices are honored as part of daily life. This is also a place whose last generation is currently living in the town, and is at risk of fading like memories of a time past…

Today Lainie considers herself a digital nomad who is living a location independent life. She and her son write and podcast their experiences from the road at Raising Miro on the Road of Life.
Read More Share
Understanding Vegetarian Foodie Choices on the Road
Haven on the Lake, Where Yogis, Pilates & Wellness Affinciados Meet