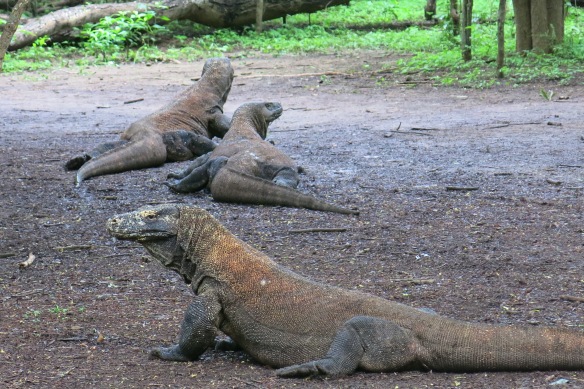 Komodo Island, famous for its giant monitor lizards, is one of the thousands of islands comprising the Indonesian archipelago. Whether it is one of 1,700+ or 1,300+ Indonesian islands depends on if you’re including uninhabited islands and atolls in the count. Nevertheless, the ratio of inhabitants to dragons on Komodo is about 1:1, with the dragons winning because they’re allowed to occasionally maul and/or kill a villager whereas the hapless human inhabitants can’t touch the dragons: they’re protected by the Indonesian government as an endangered species and “national treasure.”

The majority of Komodo Island’s 300+ square kilometers is a National Park. Most of the park beyond the village and nearby Pink Beach is fairly rough terrain but is hikeable. Park and government regulations require that all visitors must be part of an organized tour led by an officially-approved guide, and no one is allowed in the park without at least one of the rangers to lead the group.

Tourists make their way to Komodo for one or both reasons: see the dragons and/or go scuba diving. Unfortunately, we were unable to go diving as our cruise’s allotted time in port wasn’t sufficient. But, I did organize a combined “dragon trek” and snorkeling tour which was a lot of fun. The guides and Komodo National Park rangers were very knowledgeable and great to talk to, and we learned a lot about the dragons and island.

For starters, the majority of the islanders are descended from convicts exiled to the island in the 19th century by the sultan of nearby Sumbawa. The dragons live here naturally, as well as on the nearby islands of Flores and Rinca. This small area of the Pacific is the only area in the world where the Komodo dragons naturally exist. The islanders are a mix of Muslim, Christians and Hindus. The dragons have no known religion, other than cannibalism…

In fact, these giant monitor lizards are not great parents. The female will lay about 15-30 eggs once a year; gestation is about 9 months. Like many reptiles, the female alone will guard the eggs initially, but once the young dragons emerge, the hatchlings have to take to the trees to avoid being eaten by Mom and her relatives.

Dragon hatchlings live the first couple of years up in the trees to avoid being eaten by more mature dragons. They hide out in holes pecked out by birds.

The first written recording of these giant lizards was about 1910 when Dutch sailors reported seeing fire-breathing monsters of up to 7 meters long (about 23 ft.). An exploratory expedition by the local Dutch Colonial Administration established the lizards were usually about 2 meters long, and could find no evidence of them breathing fire. The largest dragon on record was 3.1 m. (10.3 ft.), but these days the average male dragon usually measures much less than 2 meters, and the females are slightly smaller. While they don’t truly breathe fire, their saliva is toxic and can kill a good-sized human. They have an exceptionally keen sense of smell and can particularly hone in on blood. On board we were repeatedly warn not to shave the day we landed in Komodo, and menstruating women were not allowed on the island. (How that applies to villagers somewhat baffled me.)

Ironically, the first Komodo dragon I saw was at the ranger station, just about 100 feet from the beach – and it was trying to get away from the tourists as quickly as possible. I managed to snap this photo before it disappeared under one of the local’s houses. 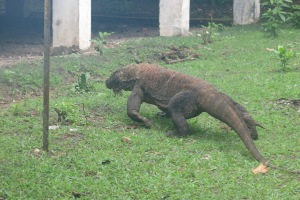 Another fascinating feature about the dragons is their digestive process. They eat their prey whole, or at least in large chunks if it’s big enough, but their gastric juices are so powerful that they can digest almost everything, including the bones. Thus, in their scat, all you see is a mucous-like puddle with some whitish congealing which is all that’s left of the bones. 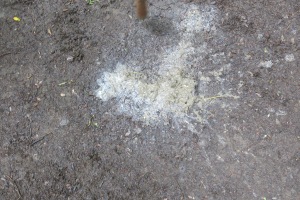 Another major attraction in Komodo is Pink Beach, whose sand is a mixture of ground white and red corals from off-shore – which gives you an idea of the beauty of the coral and other underwater sights. Our snorkeling expedition off Pink Beach was a bit daunting do to an unusually strong current. However, there was enough coral and fish to make the effort worthwhile. In all, a unique island to have visited.

Carol Barbier Rolnick grew up in Japan and Southeast Asia, traveling extensively as a child through Asia, the Mideast and Europe on family vacations. Travel has continued as a priority through raising kids and continuing into retirement, extending adventures through the Americas, southern Africa, Asia, and repeat trips throughout Europe. Carol and her husband, Michael spent four summers based in Utrecht, The Netherlands, which has become like a second home. They are (still) aiming towards Australia-New Zealand and Antarctica to round off their continental travels.
Read More Share
Learning From Experts at Mexico City's Mezcal and Tequila Museum
Alas, Cold & Mishap in Hokkaido Japan

One Response to Oh Those Dragons on Komodo Island