Mt. Cook, known also by its Maori name, Aoraki, is the tallest mountain in New Zealand at 3754 meters. New Zealand is a small country yet chock-filled with natural beauty everywhere you look. It’s difficult to name any particular site as my favorite — and I certainly haven’t seen every square meter of NZ — but I’ve settled on two: Aoraki, also known as Mt. Cook, and Doubtful Sound, both on the South Island. We spent three days in Aoraki/Mt. Cook National Park, hiking, sightseeing, and taking a thousand pictures. Aoraki absolutely captivated both of us. There are certain places in the world that capture the soul of everyone regardless of their background or beliefs. I believe Mt. Aoraki is one of them. The Maori name, Aoraki, means “cloud piercer,” and for centuries has been a sacred spot for Maoris. The great mountain certainly emits a form of raw splendor and an irresistible pull for people, regardless of whether they aim to climb it or simply bask in its beauty.

Aoraki is not a simple mountain to summit. Mountaineers deem it a highly technica, difficult climb. Sir Edmund Hillary first climbed Aoraki in January, 1948 and was part of the first team to scale the South Face of Aoraki a month later. Hillary prepared for the first succcesssful Everest ascent of 1953 by climbing Aoraki and other South Island Mountains.

Statue of Sir Edmund Hillary as he was on the successful Everest ascent in 1953. It stands on the deck of the Hermitage Hotel in AorakiMt. Cook Village within the national park.

Aoraki as seen from the foot of the Hillary statue. The weather often blows from the west and the Tasman Sea, often causing rapid and extreme weather conditions. Upwards of 70 climbers a year are rescued from the heights of Aoraki.

We hiked several trails (or parts thereof) in the park. One of the most popular is Hooker Valley Track, which winds past the Hooker Glacier and Lake Mueller in its initial stages.

Hooker Glacier with Lake Mueller in the foreground.

The left peak is Mt. Sefton; at far right is The Footstool.

A huge moraine wall from the Mueller and Hooker glaciers. Mt. Aoraki stands in the background.

Milky Tasman Lake at the foot of the Tasman Glacier, the longest in NZ. We tried for 3 days to go kayaking on this lake but the excursion was cancelled each day due to high winds.

Aoraki as seen from Lake Tasman; this is the eastern face, from which it is easier to see the triple peaks of the mountain.

Aoraki is 3754 meters high, 10 meters shorter than it was 25 years ago. In 1991 a massive avalanche — a common occurrence on the mountain — shaved 10 meters off the mountain top and caused such a rumble that the slide caused a 3.9 earthquake. 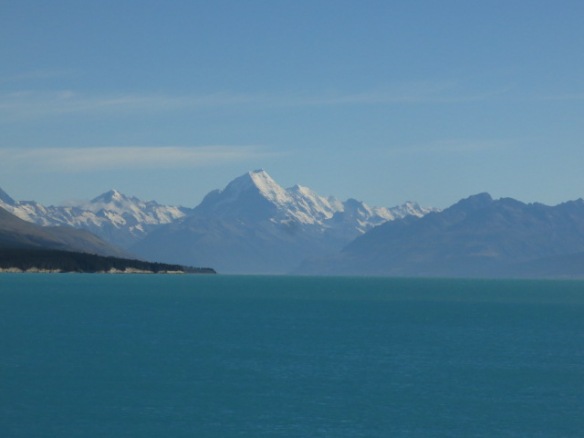 Our last look at Aoraki before heading to the Christchurch airport and Australia.

Most tourists traveling to New Zealand’s Fjordland opt to take a 2-3 hour boat ride on Milford Sound, one of the dozens of fjords carved into the southwestern coast. We preferred to take an overnight cruise on a less-sailed fjord, Doubtful Sound. Deep Cove Charters, with whom we booked, carried no more than 12 passengers on its boat — a far cry from some of the fjord cruisers which have upwards of 100 people on their day trips. Our decision turned out to be a marvelous one. From the moment we departed the dock in Manapouri, we were on an adventure in a natural wonderland. 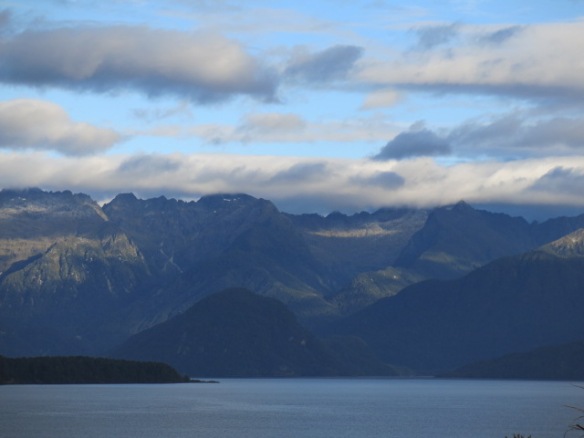 Dusk on Lake Manapouri — easily one of my favorite lakes in New Zealand.

Getting to Doubtful Sound was a bit more complicated than hopping a tourist bus. We took a 1-hr. boat ride across Manapouri, then the boat captain picked us up and drove us to the far side of these mountains, where we picked up the boat on Doubtful Sound. The extra travel was well worth it.

First look at Doubtful Sound from the top of the mountains’ pass. 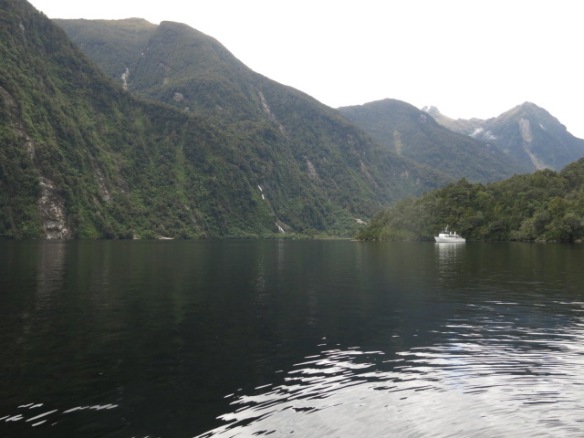 Another boat on the Sound — just to give some perspective.

After getting settled, the first order of business was lunch, fresh-caught lobster (or crawfish, as the Kiwis call it). And then the adventure began. The variety of landscape and wildlife within the Sound was amazing: penguins, dolphins, fish (and sharks), fur seals, albatross and seagulls, and waterfalls cascading off the steep slopes everywhere you looked. It didn’t matter too much that our two days’ were cloudy and ended in a light drizzle — the fjord was delightful.

This penguin steadfastly held his ground despite gawking kayakers and boaters.

Most of the passengers went fishing off the stern. For the most part, we caught perch, sea bass, and a few blue cod. One guy reeled in this 4-ft. school shark. The captain earned a lot of gold stars from me for hauling it on board to remove the hook (despite some very sharp, triangular teeth) and returning it to the fjord. 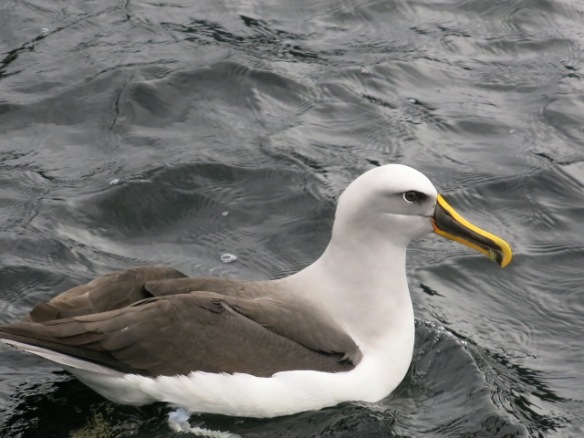 A Buller’s Albatross. Several of these birds as well as some Stewart Island albatrosses followed our boat. The captain used some of the smaller perch we caught to toss to the birds, so we had an ample entourage of seabirds. 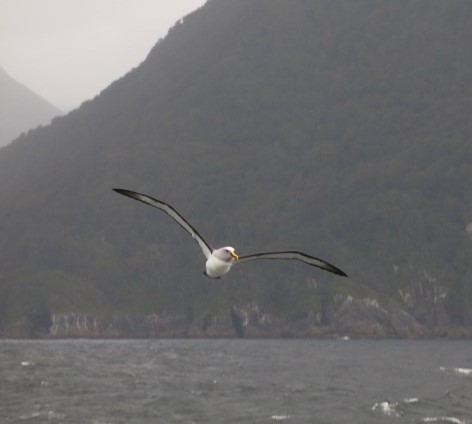 A Buller’s in flight.

A squawking Buller’s comes in for landing and free fish.

The captain and mate pulled some set lobster traps. In one trap, an octopus showed up with the lobsters. When tipped out of the trap it rapidly crawled across the deck to the nearest scupper and disappeared overboard. We dined that night on fresh-caught fish and had some of these lobsters the next day for lunch. Lobster twice in 24 hours! 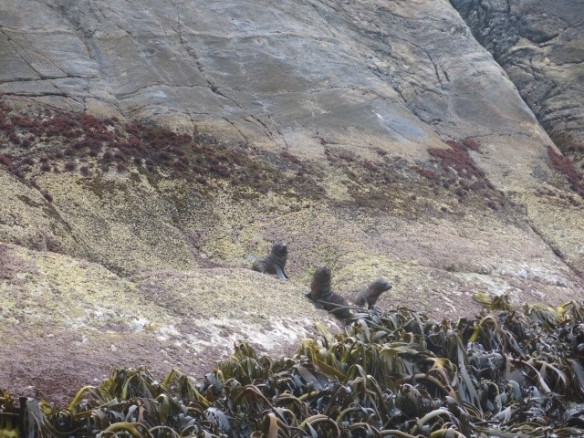 Three adolescent pups were part of a huge colony of New Zealand fur seals near the mouth of the Sound. 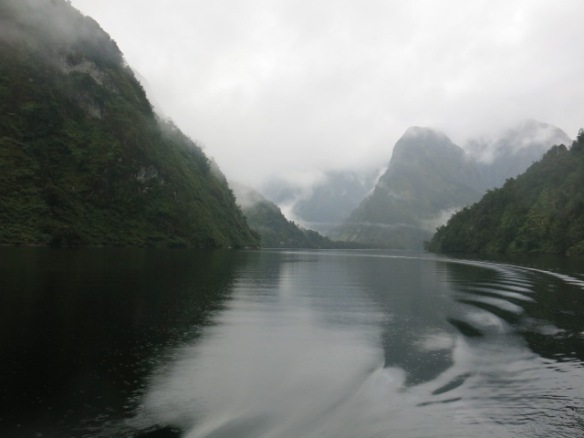 And so we said goodbye to Doubtful Sound, just one of the incredible sights in New Zealand.

Carol Barbier Rolnick grew up in Japan and Southeast Asia, traveling extensively as a child through Asia, the Mideast and Europe on family vacations. Travel has continued as a priority through raising kids and continuing into retirement, extending adventures through the Americas, southern Africa, Asia, and repeat trips throughout Europe. Carol and her husband, Michael spent four summers based in Utrecht, The Netherlands, which has become like a second home. They are (still) aiming towards Australia-New Zealand and Antarctica to round off their continental travels.
Read More Share
The Back 40 Kitchen, For All Things Organic in Greenwich
Naot Shoes and Boots, Where Elegance & Functionality Meets Comfort