“What we are is the barbecue police,” Carolyn Wells says as she surveys the stands that have popped up in this field in Flanders. She looks the part in her Kansas City Barbecue Society sweatshirt, and I’m not the only one who thinks so. As she leads me amongst the different teams, some American but most European, I’m struck by how much weight her presence seems to carry as she passes, commenting on different smokers, techniques and cuts: to these barbecue aficionados, Carolyn is the queen.

The Kansas City Barbecue Society is the “most regional-sounding but most global” of the organizations that host barbecue competitions, according to Carolyn. With 14 contests now in Europe, it is the world’s largest organization that sanctions cooking contests. But with more than enough eager and talented pitmasters in the States, why come to this little corner of Belgium?

Because, Carolyn explains, “Barbecue is the new old food.”

Old is a concept that few Americans can truly comprehend the way the Europeans do. U.S. history classes start over a millennium after European history textbooks begin. It’s a mere moment compared to the layers of history and prehistory across The Pond.

I remember visiting a small town in France, struggling to comprehend how a museum devoted to prehistoric man could stand side-by-side with a gallery of modern art, both rooted in the same place, in the same landscapes. Europe quite literally bathes in its history; no matter where you go, you find yourself surrounded by plaques, memorials, buildings older than our nation itself.

The Ijzertoren (tower of iron) in Diksmuide, Belgium. Photo courtesy of Claudine Van Massenhove via Shutterstock.

The KCBS festival location is no exception; the site chosen for the festival is in the shadow of the Ijzertoren, a memorial along the Yser river, erected to commemorate Belgian – and particularly Flemish – soldiers killed during World War I. As we approach, the first thing we see – before beer stalls or smokers – is the Ijzetoren memorial tower, a local point of pride in a country where languages have warred for centuries.

Culture is linked to language in an innate and inextricable way here; Flemish World War I soldiers fought for Flemish rights for years as battles raged around them in French, the army and homeland they fought for refusing to recognize their language as official. This memorial is a symbol of Flemish pride – and yet, it is here that it was decided that the American language would drop anchor this weekend: KCBS would hold its first Belgian barbecue competition in tandem with the Belgian BBQ Team Matthias’ Lowlands BBQ Championship, coinciding with the celebration and commemoration of the World War I centennial.

The juxtaposition of the two – the rich history of Belgium and Flanders and the importation of pure Americana struck me as strange at first; after spending two days with KCBS, I would begin to understand.

Americana In The Kitchen

Whereas in the States it’s always been cool to be Parisian, here, it’s suddenly become much cooler to be American. Abercrombie and Fitch openings in European cities cause riots, and American rock concerts sell out quicker than hot cakes. But until recently, American and cuisine were two words that were never seen side-by-side, at least not in Europe. 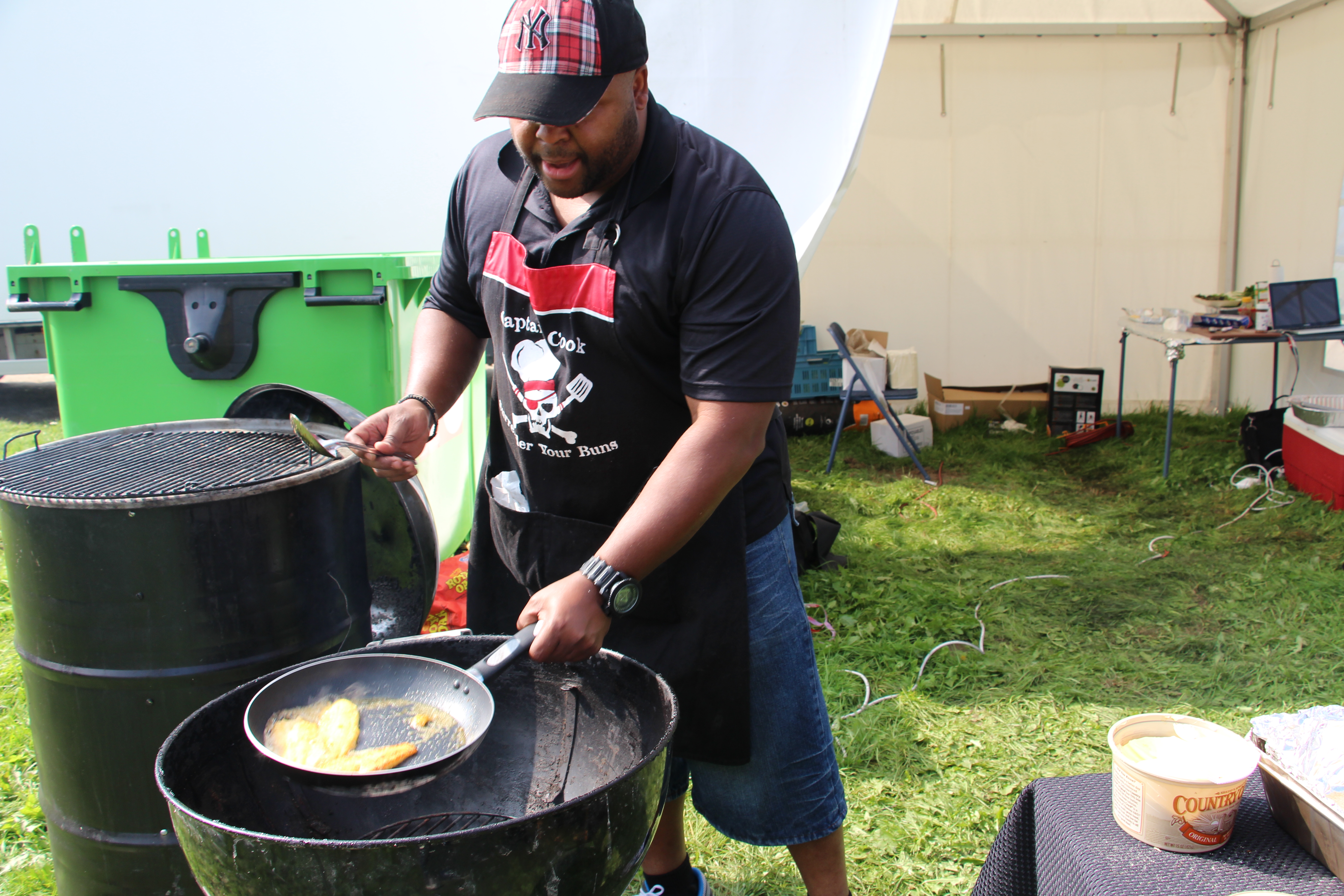 An American cook gets ready for the fish competition.

And yet, in the past few years, things have changed. In Paris, “Brooklyn-style” restaurants serving artisanal burgers, questionable fusions and craft beers in exposed brick settings are popping up on every corner, and barbecue has struck the fancy of more than a few Europeans. While at the festival, I met Italians, Croatians, Dutch and English, all intrigued by this American cooking technique for different reasons. One claimed he stumbled into it when a kitchen remodel took too long and he had to make dinner in the garden. Another had discovered it while traveling in Tennessee. Slowly but surely, American food is dissociating itself from McDonald’s, and of all of the regional specialties to have taken root in Europe, barbecue and burgers – homestyle, no fuss foods – seem to be the first and foremost. 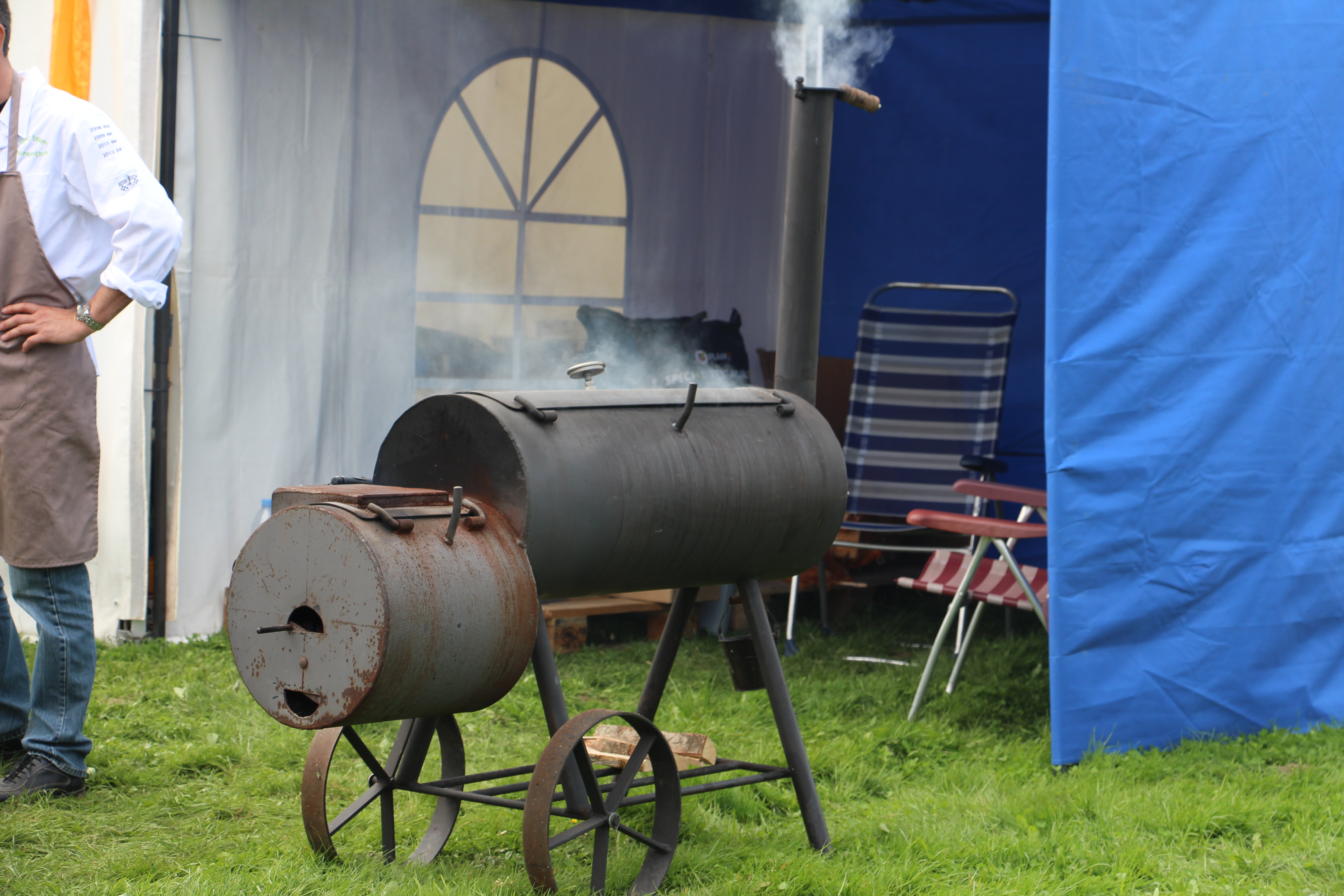 One of many kinds of smokers at the contest.

“It’s not a solitary food,” Carolyn explains. “It’s not expensive. You eat it with your hands. It is Americana. You take a lowly cut of meat and turn it into a work of art.” 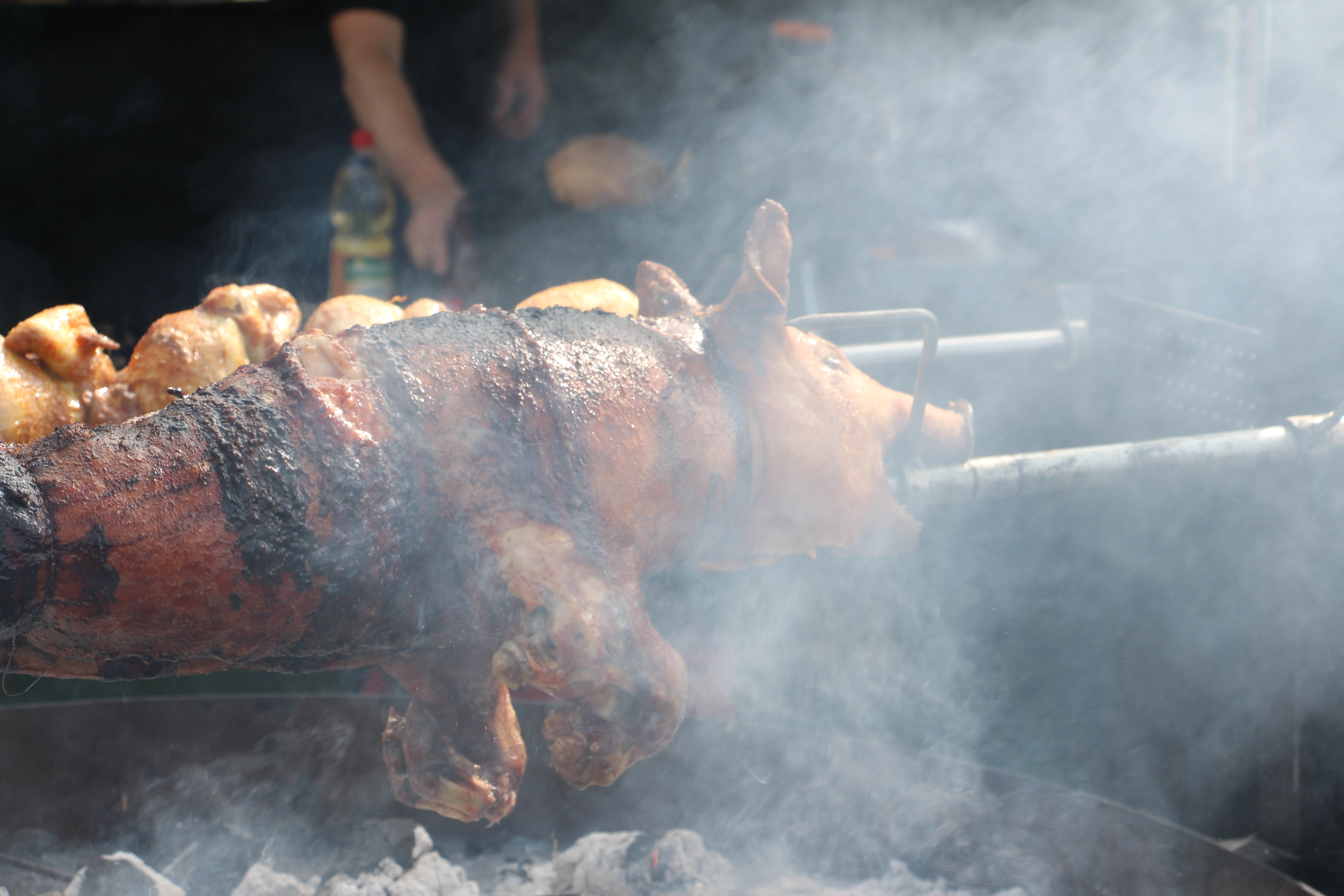 Spit-roasted pig at the festival.

The festival is characterized by its jovial nature – Belgian beer, the smell of hickory wood and the sounds of bluegrass music permeate the Flemish field. And yet, the people sipping from plastic cups of pilsner as they sit in lawn chairs before their smokers are far from mere amateurs. For many of the European teams competing here, Belgium is just the beginning. 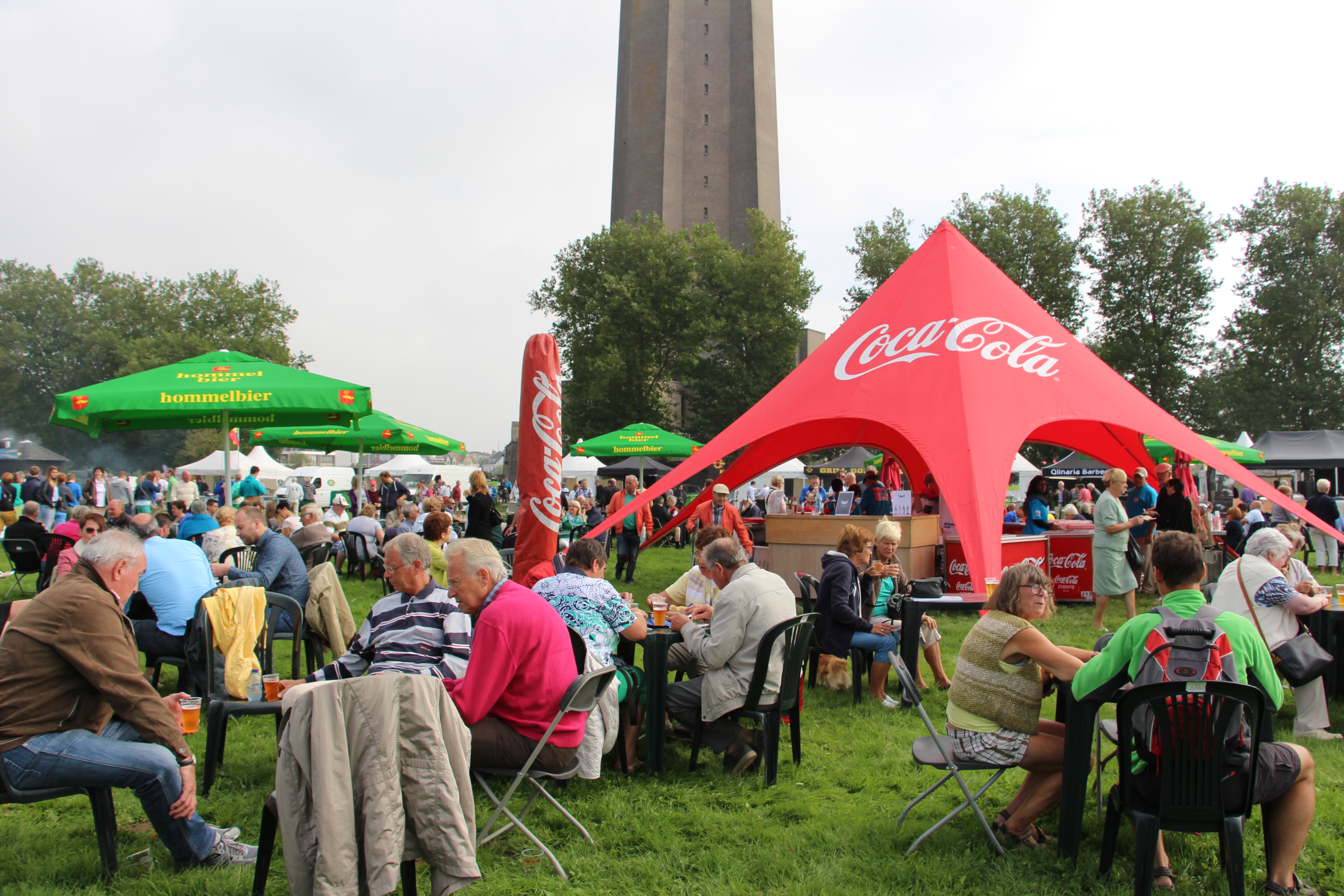 “They wanted to be able to better compete at the Jack or the Royal,” Carolyn says, citing two of the biggest American barbecue competitions. “They were traveling thousands of miles to cook something that isn’t really native to their culture. All countries grill, but barbecue is American. Europeans want to know how to compete in a place where barbecue is home.”

Enter KCBS. The barbecue society started these European contests to help European teams learn the ins and outs of American barbecue before shelling out to compete in Tennessee or Missouri, with the help of local organizers, like Okker Cuiper, a table captain for judges who has organized his own contest in Switzerland next May. The Swiss ‘cue lover notes several differences between American and European styles, differences that could make or break a team’s chances in the big leagues.

“Europeans do more experimentation,” he says. “Wood chips with all kinds of seasoning in it, and less smoke.”

A gourmet approach that seems in line with the European ideal of making even simple meals extraordinary, but not without its risks. Judges need to learn how to handle these differences for fair scoring amongst both American and international teams – but this falls into the realm of KCBS, as well.

Being a barbecue judge seems like it would be a pretty sweet deal; however, it actually involves quite a bit of training. When KCBS agrees to sponsor a European contest, they also offer a judging training course, to ensure that even abroad, American barbecue standards are respected.

Judges at this competition are both American and European, experienced and newly minted. The training course for the latter takes place in the cafeteria of a restaurant school on the premises, the ideal place for them to learn to taste. After just a day of training, they will judge not only the four staples of KCBS competitions – chicken, pork ribs, pork shoulder and brisket – but also four Lowlands competition plated dishes – fish, kangaroo, bacon and gingerbread. 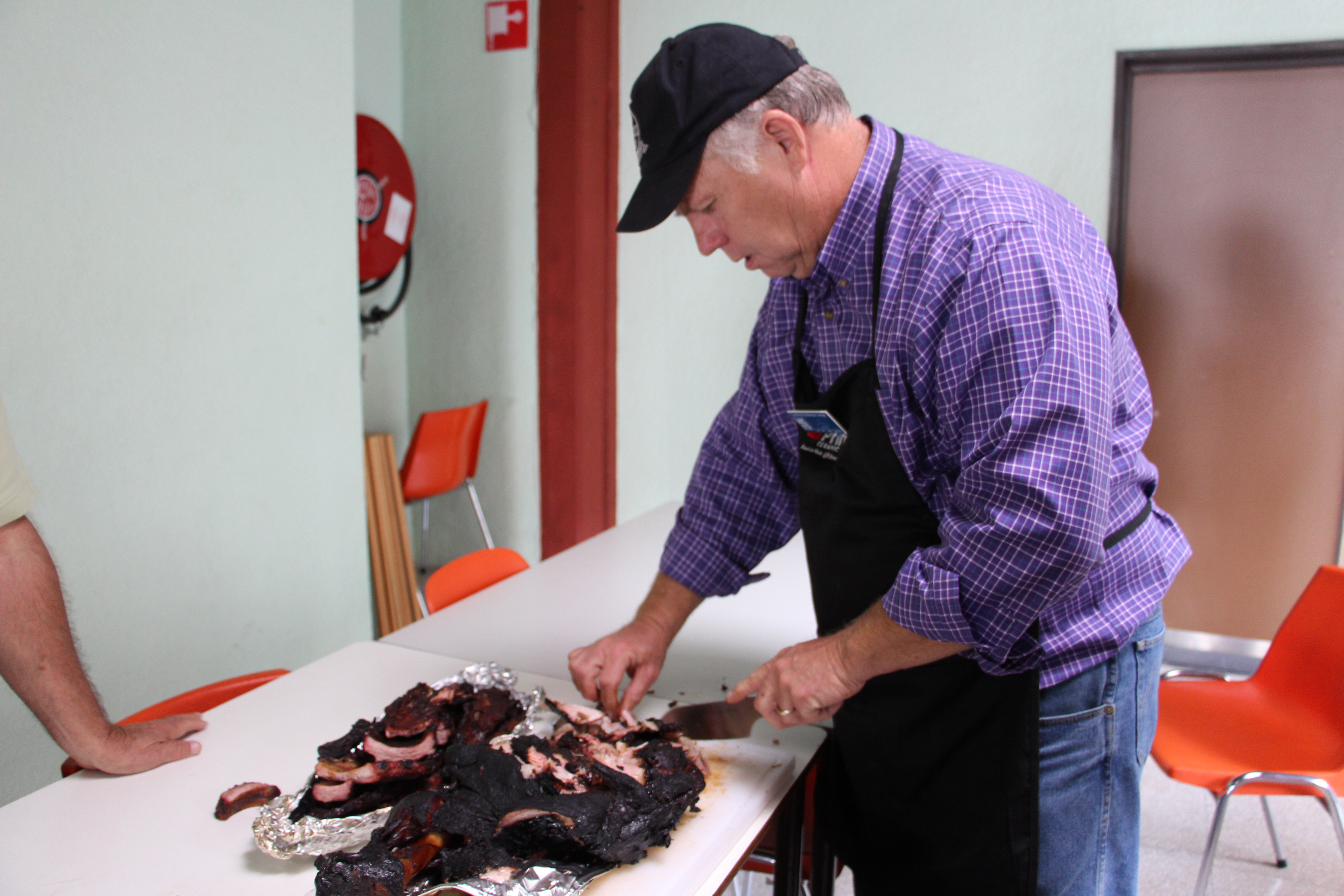 At the back of the room, Jim Johnson cuts into a smoked pork shoulder he prepared the day before.

“I wasn’t supposed to cook here,” says the KCBS table captain and former competitor with several perfect scores in his arsenal. “I was able to borrow a knife, a set of tongs, a bag of charcoal and a grill.” He easily pulls the bone out of the supple shoulder and begins cutting the pork into pieces; his lack of advance warning doesn’t seem to have rattled this seasoned volunteer in the least.

But learning to judge isn’t just about learning to taste like an American; the point of these contests according to KCBS vice president Wayne Lohman is to teach both teams and judges to adapt the all-American cooking style to the local palate. 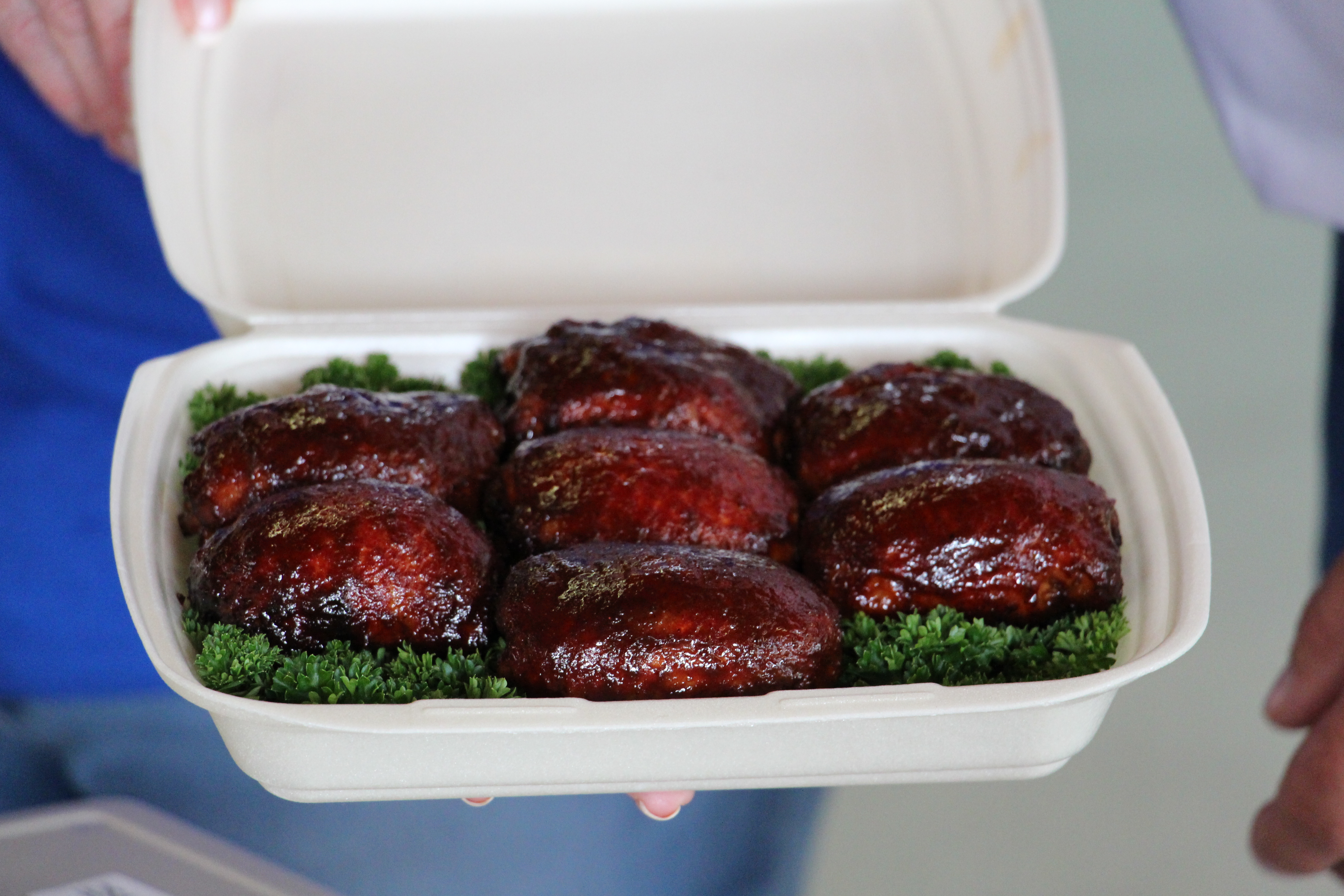 A chicken box ready to be judged on appearance.

“Flavor profiles are tough,” Wayne says. “We tell (teams) to go to local restaurants,” he says, where they can learn how best to please a local juror.

Flavors that are popping up in local restaurants are likely pleasing to locals; whereas Americans are accustomed to something sweet and hot, Europeans are far more likely to enjoy something a bit more savory and with less spice.

“Europeans are used to cooking faster and hotter,” he adds.

“I intentionally try to put something in there that they can find,” Jim says. 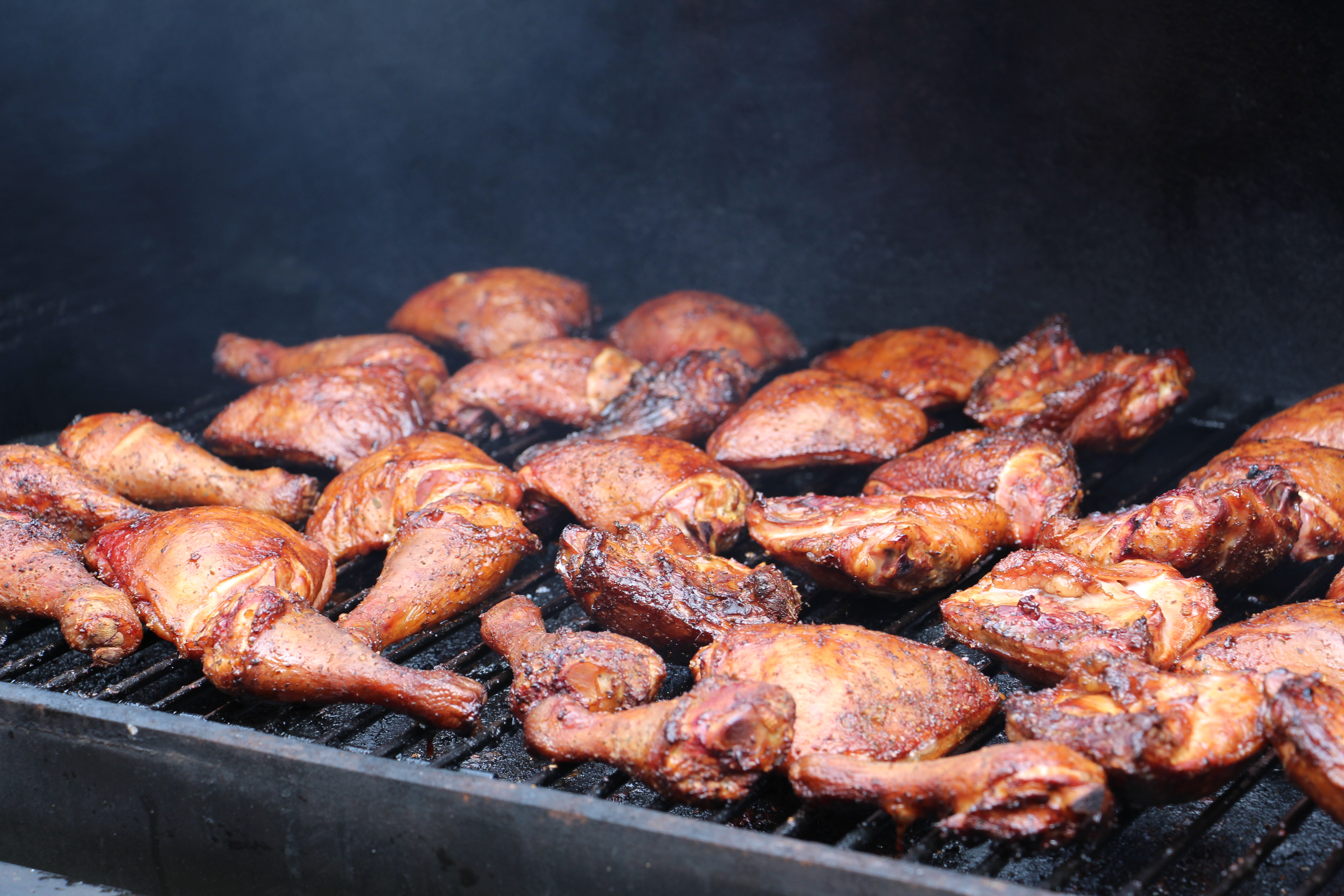 Chicken being grilled for the judging tests.

On a scale of 1-10, a 5 is a miserable score. He notices a lot of 6s for the chicken, but he doesn’t seem to mind; he just nods and says, almost to himself, “Too bitter. Too much smoke in the skin.”

Mastering The Art Of Barbecue 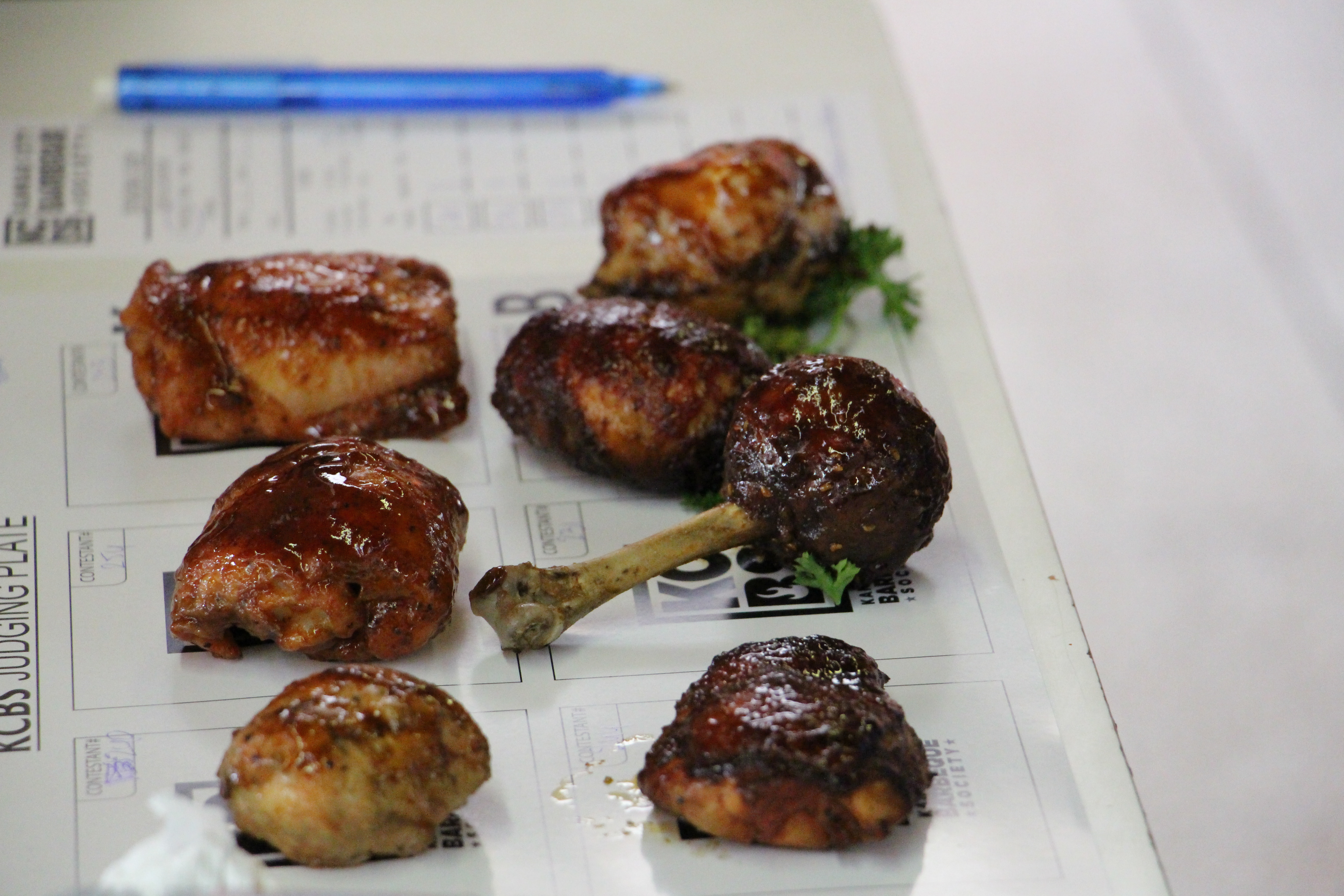 A judging plate with several entries in the chicken category.

Each judge will sample several iterations of the eight dishes over the course of the next few days, and some interesting and unfamiliar approaches will surprise the seasoned KCBS volunteers.

One team is disqualified for the “appearance” score by using red tipped lettuce instead of approved green lettuce or curly parsley. A volunteer is asked to seek out the team and let them know, so they’ll change their garnish for next time.

A box of beef brisket is delivered to one table completely rare in the middle, looking more like roast beef than the expected Texas-style brisket, barely pink in the center with the slightly elastic texture that shows the perfect low, slow smoke.

The four additional plates requested by the local organizers cause Jim, Wayne and the other seasoned American participants to break out in grins.

“We never get to see things like this,” Wayne says, looking at the exactitude of the European plating, the mastery of garnish that is generally overlooked or even frowned upon in barbecue. 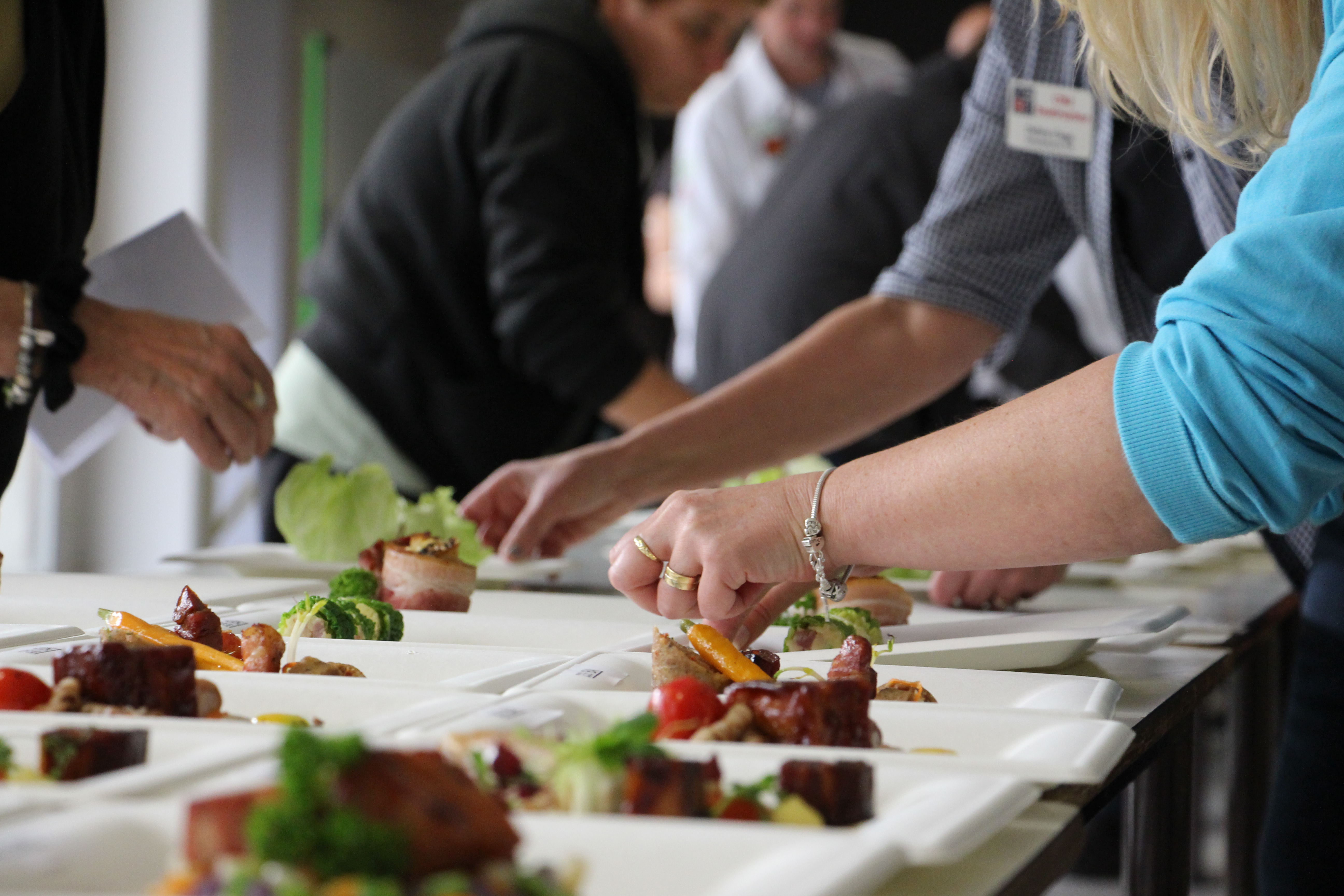 As the contest arrives at its end, many locals have tried barbecue for the first time and had their fill. Judges are going home with new experiences and new friends hailing from all over the globe. From the festival outdoors to the judging room inside, the language of the two-day span has not been Flemish or French but English, and no English I’ve ever heard before. It’s a hodgepodge of accents from Europe and the States, everyone seeking to understand and make themselves understood. And when words fail, barbecue unites. Carolyn looks on smilingly as teams come by to deliver their boxes, sometimes with a great deal of fanfare. 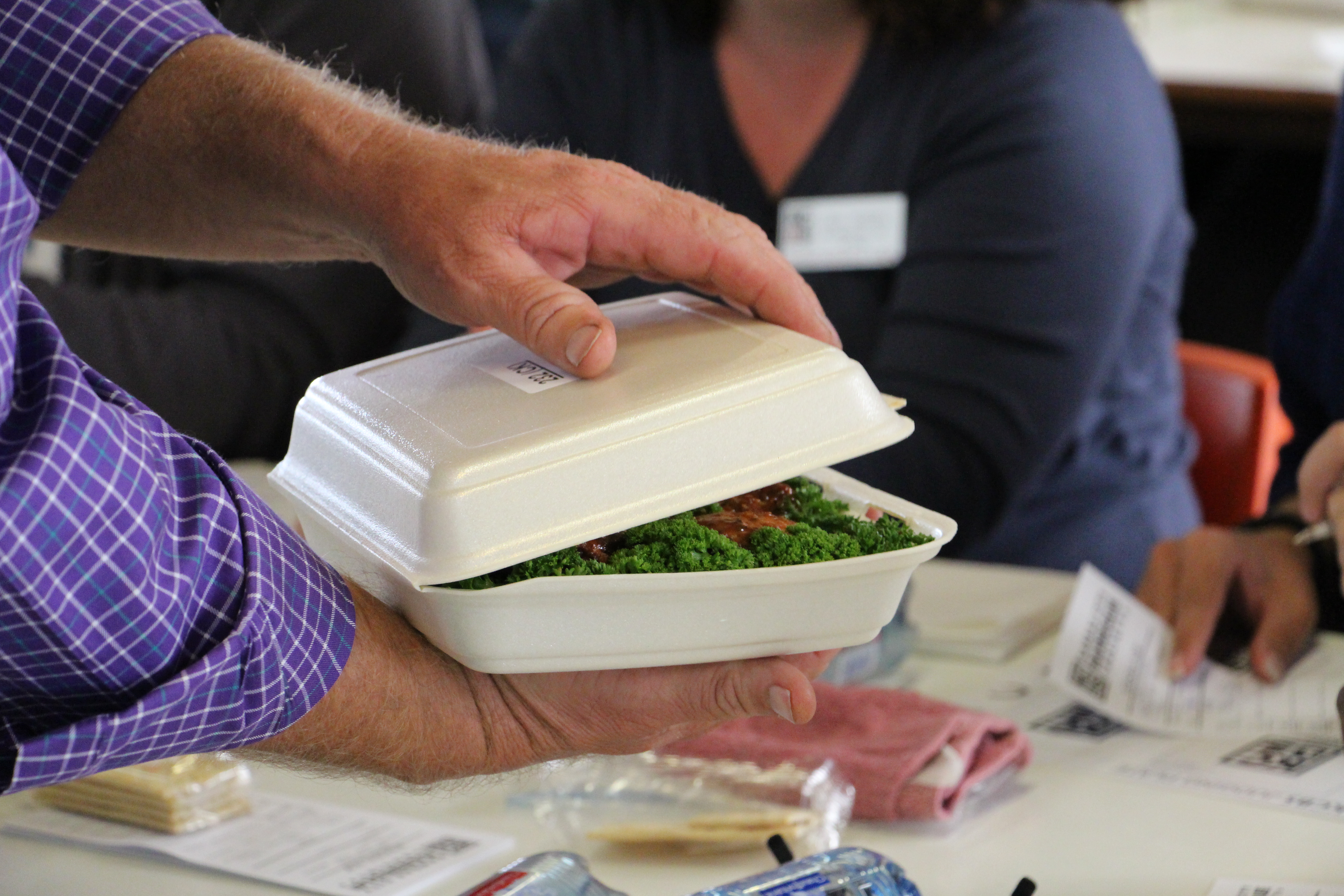 The moment of truth.

“The joy and enthusiasm you see here…” she trails off, her eyes reflecting her own excitement. “We can be taken for granted in the States. Here I have people coming up to me saying, ‘Thank you for starting my hobby.’”

And to think, she says, “All we wanted to do was drink beer and cook meat.”

Have you savored barbecue in Europe? What was your experience like? Please share in the comments below.

Jessica Festa is the editor of the travel sites Jessie on a Journey (http://jessieonajourney.com) and Epicure & Culture (http://epicureandculture.com). Along with blogging at We Blog The World, her byline has appeared in publications like Huffington Post, Gadling, Fodor's, Travel + Escape, Matador, Viator, The Culture-Ist and many others. After getting her BA/MA in Communication from the State University of New York at Albany, she realized she wasn't really to stop backpacking and made travel her full time job. Some of her most memorable experiences include studying abroad in Sydney, teaching English in Thailand, doing orphanage work in Ghana, hiking her way through South America and traveling solo through Europe. She has a passion for backpacking, adventure, hiking, wine and getting off the beaten path.
Read More Share
Iran's Lake Orumiyeh, One of the Largest Landlocked Salt Lakes in the World
The Story of 3 Women Who Are Reviving Ladakh's Culture