Reflect on Bali, and near-mystical images spin through one’s mind. The mist hanging on smoking volcanic cones, people laying offerings by roadside shrines, ancient temples, solemn cremation ceremonies, gracefully peaked, ornamented houses, terraced rice paddies: all these scenes are a part of Bali that is timeless and untouchable. Yet, even as all these ancient scenes and settings are still plentiful here, so are the tourist-clogged mega malls, the surf hangouts and the tawdry bars. By comparison, images of South Pacific seem nostalgic. Thankfully, the “new” Bali is still somewhat contained in the southeast quarter of the island while “old” Bali can still be found within an hour or two drive of the 21st century hedonism that seems intent on drowning this ancient culture.

Bali, the first island east of Java in the Indonesian archipelago, is one of the most spiritual places on earth. And it is because of Bali’s spirituality that this island maintains its unique place in our modern world. By spirituality, I don’t mean strictly religious practice, although religion is not only present, but an ingrained part of Balinese life. “Religion” in Bali is a seamless melding of early Hinduism, Buddhism (also with origins in India), ancestor worship, and native animism. Life in Bali is not just about nominal participation in certain ceremonies at specific phases or benchmarks of life, or require participation in the occasional ceremony.

To the Balinese, religion is part of the living belief system, the daily acts of life, from rising in the morning, preparing food, going about pedestrian chores, to just being alive – and always remembering and honoring the multitude of gods, ancestors and spirits that surround and form daily life. For a Balinese, placing an offering at a small shrine on a median strip in the middle of a congested roadway is as natural and part of life as crossing that street.

Laying another small offering seemingly randomly in a passageway or entrance is a quotidian act of appeasement for any ground-based demon spirits that may lay lurking nearby. Of equal dedication and spirituality is the daily ritual of placing small packets of fruits, rice and other offerings to household gods and ancestors in the family temple.

Small shrines are found in every Balinese courtyard, on the roadside, in rice paddies.

Small offerings of rice or fruit are laid on paths, in doorways, or sidewalks to appease any evil spirits.

Traditional Balinese homes have their own family temples within the home kampong.

Temples abound in Bali, whose origin may have from the ancient Hindu religion, but have evolved over the centuries as just one source for the uniquely Balinese religion of Tirta. “Hindu” is a brand only recently given Tirta, but delve past the for-tourist-patter and you will find the differences. Yes, there are familiar Hindu-inspired gods nearly everywhere, but Tirta is so much more.

I am no expert in any of the multiple religious origins comprising Tirta but I will name some differences I’ve noticed. Unlike Hindus and some Buddhist sects, Balinese eat meat: chicken, beef, pork, seafood – all are part of the Balinese diet. An exception is the priests; they cannot eat the flesh of a four-legged animal. And while some animal-human figures, such as Ganesha, the Hindu god with the elephant visage, are honored, no animal is considered sacred, as in India. In fact, a favorite Balinese sport is cock fighting.

But the most important aspect of Balinese Tirta is water. Water is both life-giving and purifying, a blessing and a necessity. Some of the most important Balinese temples are either dedicated to specific bodies of water or are placed at specific conjunctions of land and water, such as the temple of Tanah Lot, the first picture in this posting.

At this point I will halt the verbiage and share mostly images of some of the shrines & temples we saw during our 3 day stop in Bali. Without a doubt, the temple of the holy water spring was my favorite and which I found so moving to witness.

Entrance to the temple of the holy water, Pura temple Empul, built about 960 A.D. 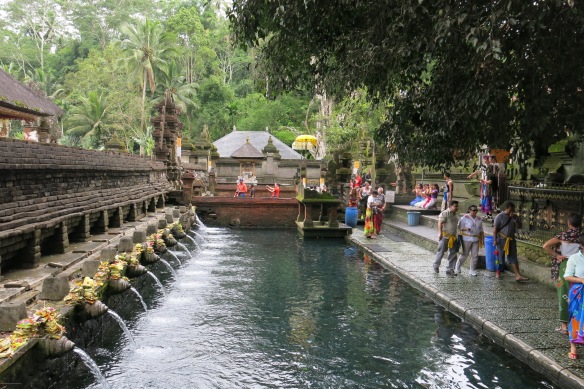 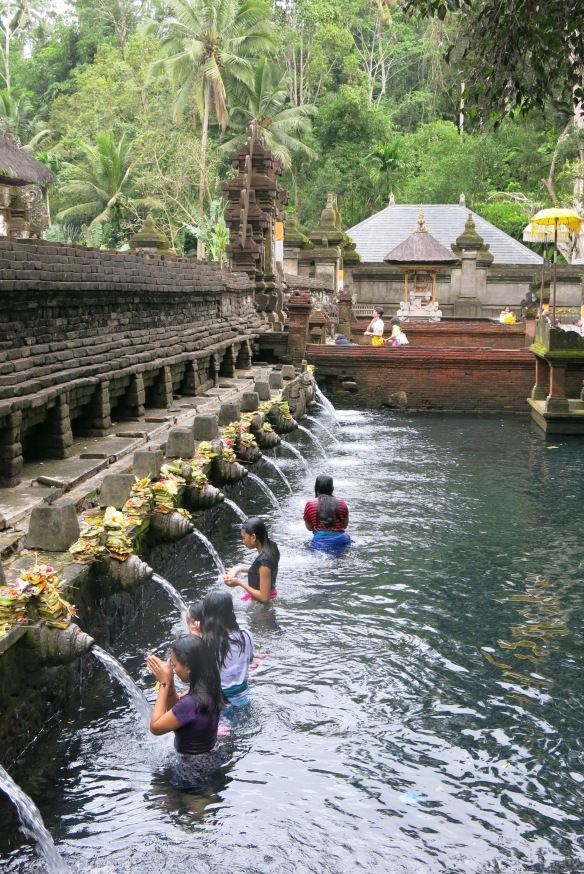 Young women praying in the pool, going from spout to spout, dousing themselves in a purification ritual.

Pool into which the two holy water springs feed. 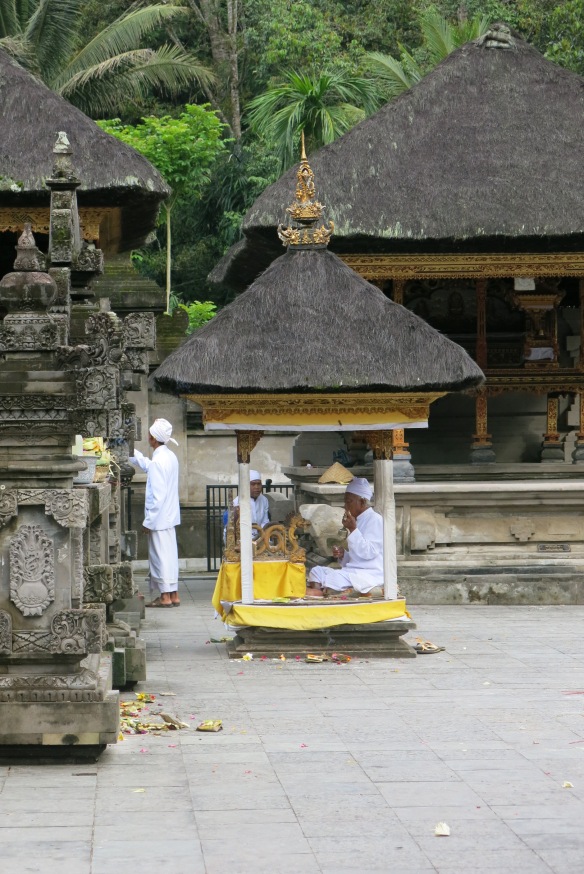 Tirta priests, dressed completely in white, lead ceremonies within the sanctum of the Pura Tirta Empul.

Pura Dalem, temple in the midst of the Ubud Monkey Sanctuary.

Entrance to temple Uluwatu in the southernmost part of Bali

One of the temples at Uluwatu, perched on the mountainside.

A different viewpoint, demonstrating the height of the cliffs Uluwatu is perched upon.

In ending, I will simply share that my own interests in “religion” have gravitated more towards the “spirituality” of humankind, where there is a stronger tie to mutual acceptance of certain universal, benevolent precepts of how to conduct your life and less emphasis on monotheistic dogma. As a girl of 16 the Balinese perception and interaction with the universe made a great deal of sense to me. Nearly 50 years later, I’m so glad to find Tirta is still strong and an integral part of Balinese life.

I would like to thank Ketuk Singer for being the most wonderful guide in the 3 days we recently spent in Bali. Through is patience and thoughtful answers, I rediscovered the Bali I’d loved so much so many years ago.

Carol Barbier Rolnick grew up in Japan and Southeast Asia, traveling extensively as a child through Asia, the Mideast and Europe on family vacations. Travel has continued as a priority through raising kids and continuing into retirement, extending adventures through the Americas, southern Africa, Asia, and repeat trips throughout Europe. Carol and her husband, Michael spent four summers based in Utrecht, The Netherlands, which has become like a second home. They are (still) aiming towards Australia-New Zealand and Antarctica to round off their continental travels.
Read More Share
Exploring the Unknown in Mirabai India
Where to go for Great Coffee in Launceston Australia

One Response to A Return to Spiritual and Colorful Bali