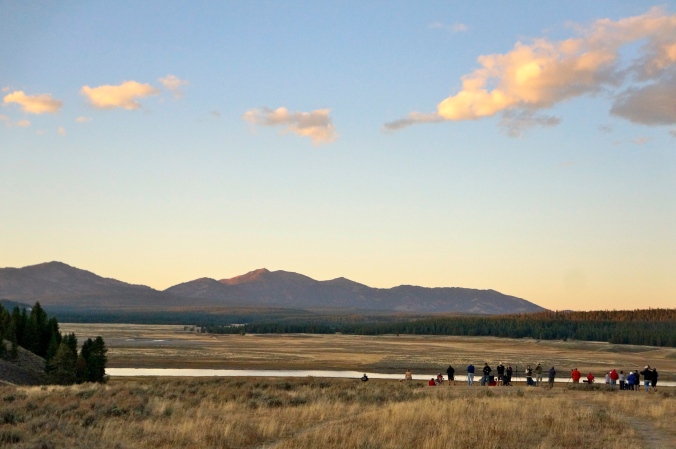 After spending a full day with the Tetons, Chris and I packed up our belongings from our “Tiny House” in Wyoming and hopped back in the car to head over to Yellowstone National Park, where we would be spending the next couple of days.

A word first about where we slept — the Kings Inn Cody Hotel in Cody, Wyoming.  While there’s a lot to love about this hotel (the eccentric decorations in the lobby and stairwell and the free continental breakfast come to mind), and the town of Cody appeared to be really adorable and quaint and quintessentially mid-western (although we didn’t really get to explore it), Cody is actually quite a distance from the park (about an hour after you make it out of the park, which can take a while depending where you are), so I’d recommend trying first to find somewhere closer, if that’s possible (which it wasn’t for us).

Oh, Yellowstone. where do I begin? There’s just so much to love. For starters, it’s important to recognize that it’s been an incredibly active animal season in Yellowstone this year, which is amazing and also a bit scary. There have been some pretty terrible bear encounters, and even a couple of bad bison encounters at some of the parks recently. So we took our bear spray with us again everywhere, tried to hike only when we were with other groups of people and made lots of noise whenever we were in bear territory … the last thing you want to do is come up on a bear and scare or surprise him. Luckily we were safe the entire time, but it’s important to be smart and stay vigilant every single time you visit a park with wildlife. These are wild animals … and no matter how tame and calm they may seem while you’re watching them from afar, things can change in an instant and you really need to stay on your toes.

There is no end to what you can see and do in Yellowstone!

^^ One of our first views upon entering the park — you see this and you just know it’s going to be awesome!

Our first animal sighting in Yellowstone — an elk!

Overlooking Old Faithful from our hike up Observation Point. 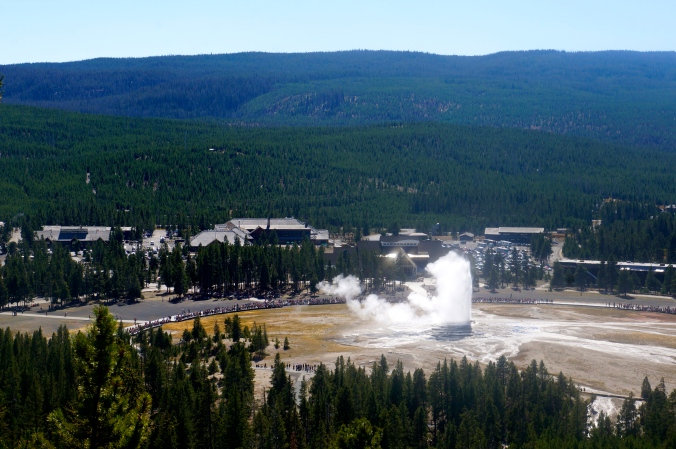 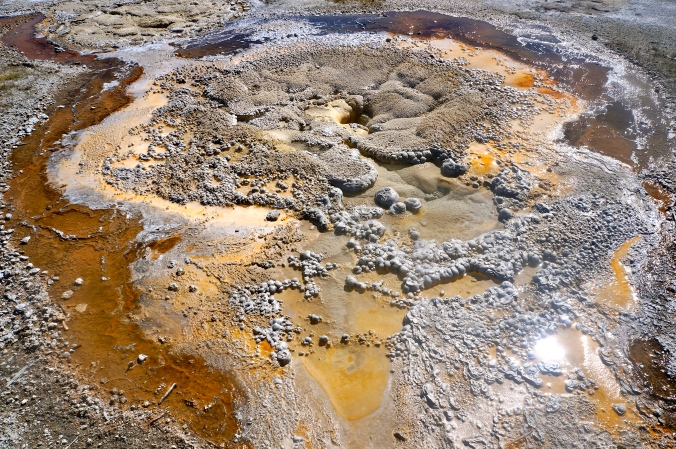 Walking around all the different geysers in the Old Faithful area was amazing — they’re so gorgeous and unique.

Bison!! The first time we saw one we were like “Woah! Look at that Bison!” until we quickly realized that they are everywhere in the park! 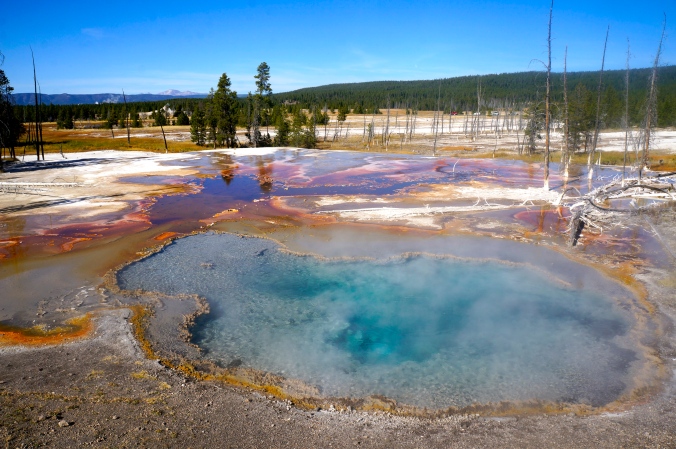 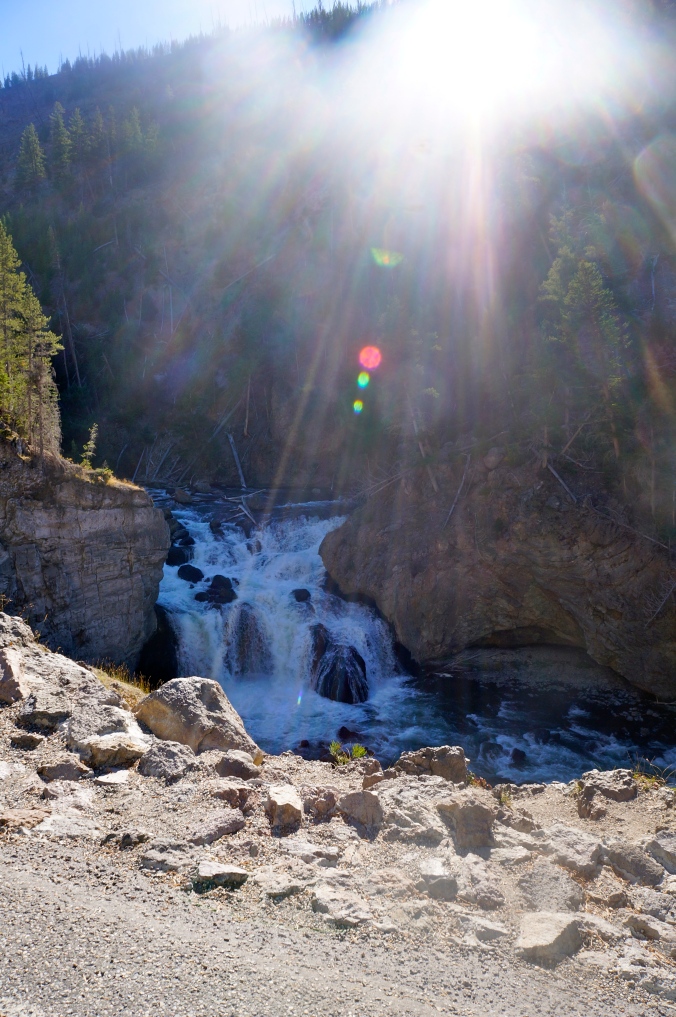 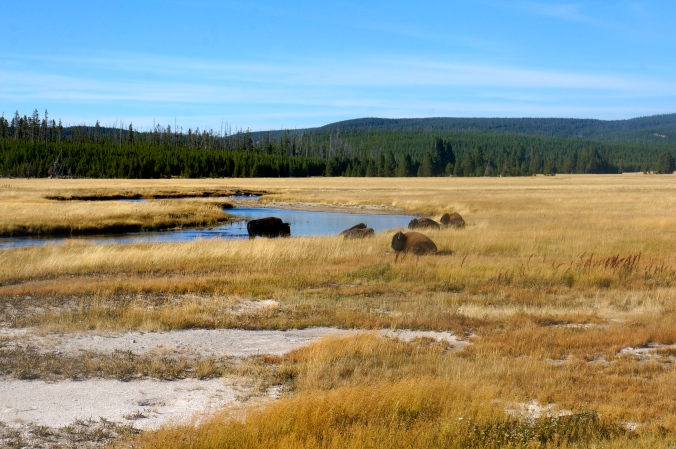 Bear footprint! We saw this about 20 minutes before a black mama bear and her baby walked right up to our car as we were driving home. Chris and I spent about 10 seconds yelling at each other to “grab the camera! grab the flash flight!” before just sitting back and enjoying the sight. Ah, nature. Perfectly lovely, when you’re safe in your car and can watch from a distance ;) 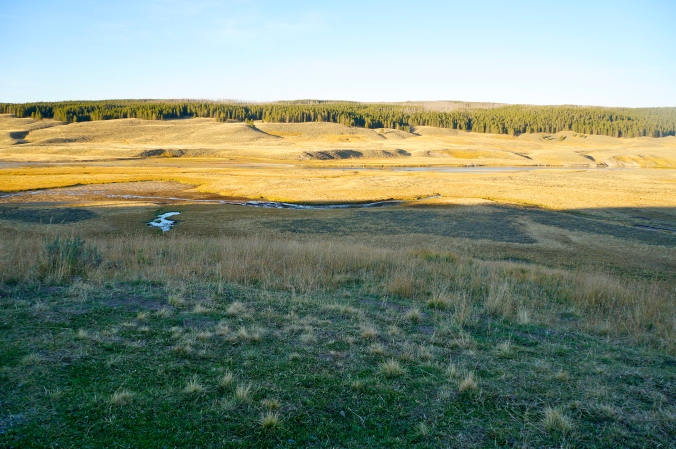 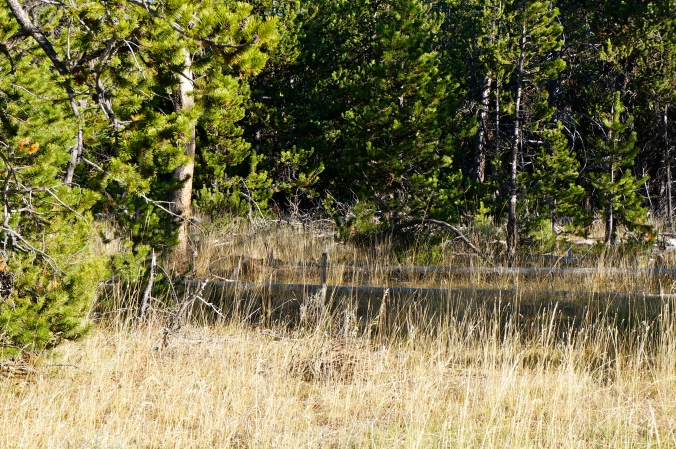 There’s a coyote in this picture! The park was especially active with coyote and wolves around this time, too. Unfortunately we were about 5 minutes too late to catch the wolves on our last night, but we saw some amazing pictures from people who did get to see them! 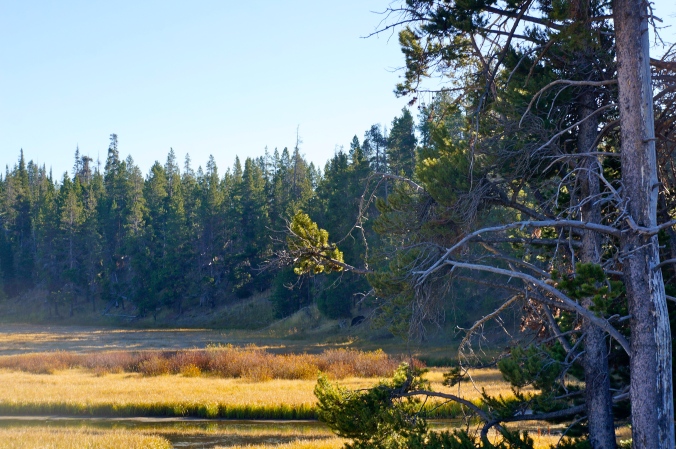 See that big ole’ grizzly lumbering off to the right side of the photo? We were lucky enough to catch this sighting about 10 minutes after we got into the park.

The Mud Volcano — there are a bunch of different geysers to see around this part of the park, as well, definitely worth checking out! 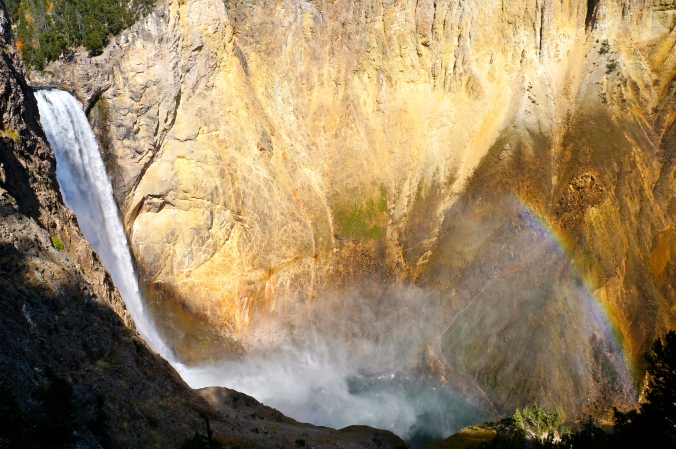 The Lower Falls as seen from our ridiculously steep Uncle Tom’s Trail hike.  You guys, this hike is absolutely worth it — if you’re feeling fit enough to do it. It’s definitely not a joke. Yellowstone is over 7000 ft. above sea level, which is pretty high, even for me, coming from Denver at 5280 ft. The hike itself covers a span of about 500 feet, and includes hundreds (I’m not exaggerating) of steps. If you take your time and acclimate before attempting this hike, it’s totally worth the view at the end, though. For those afraid of heights, the open metal stairs might pose a small problem, too. I’d recommend just holding onto the railing and looking straight ahead … not down!

The Grand Canyon of Yellowstone. 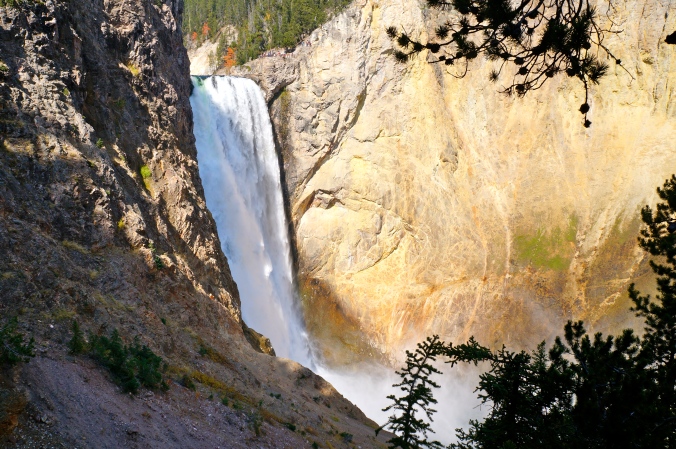 This mother and baby big-horn sheep were grazing right next to the side of the road, totally oblivious to the cars and people. 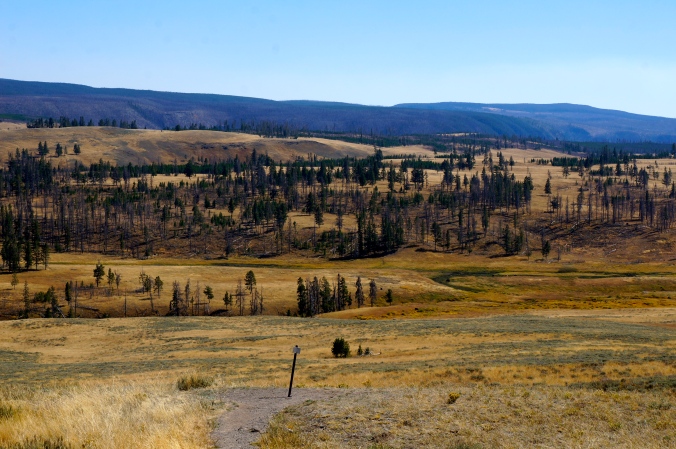 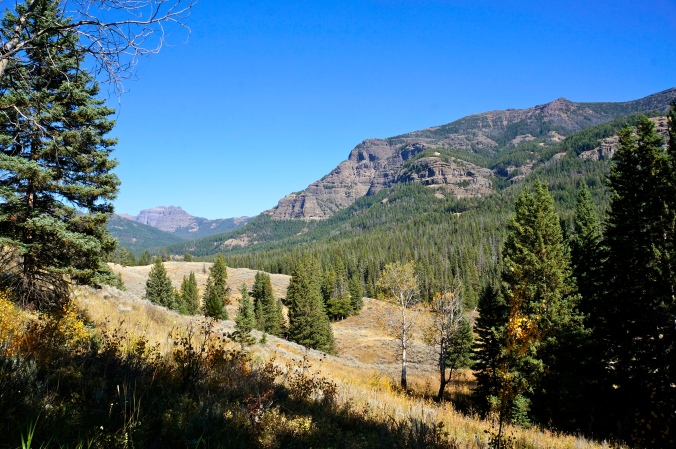 Views on our Trout Lake hike. This hike is gorgeous (as you can see from the above photo), and it’s relatively short to get to the lake, but it is steep, and it’s deep in bear country, so do not do this hike without bear spray and lots of other people to make noise! 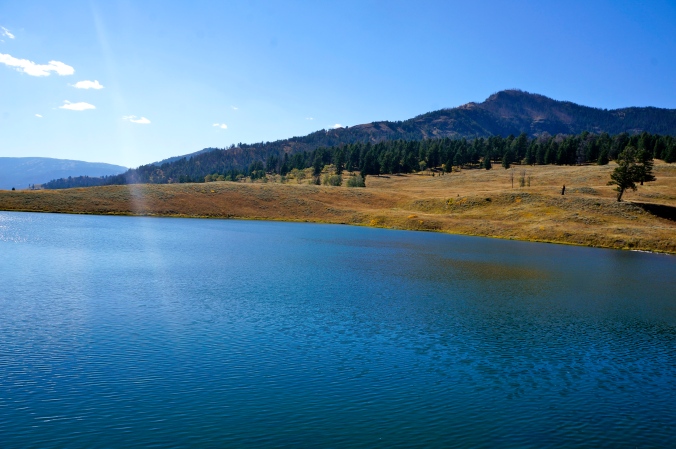 Not sure where this skull came from, or what kind animal it is, but let’s just say it was a bit unnerving to come across it while walking around such a serene, beautiful lake! 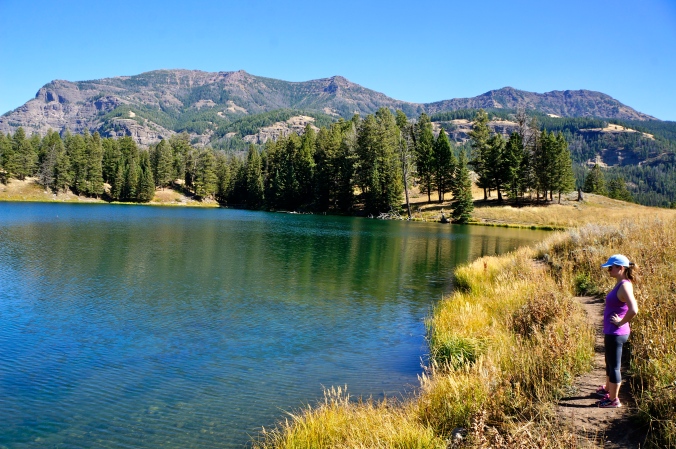 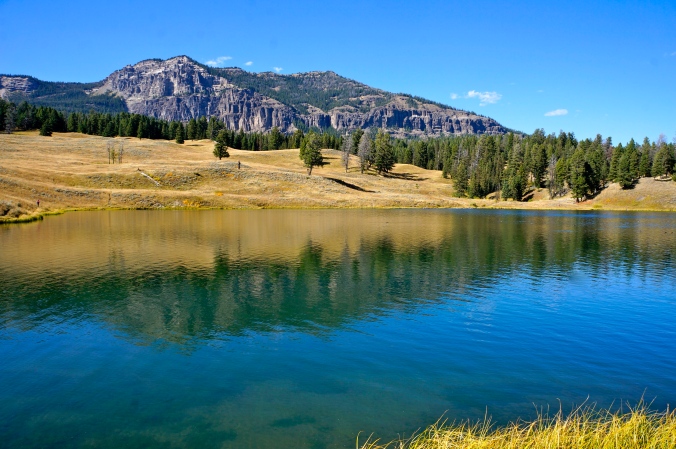 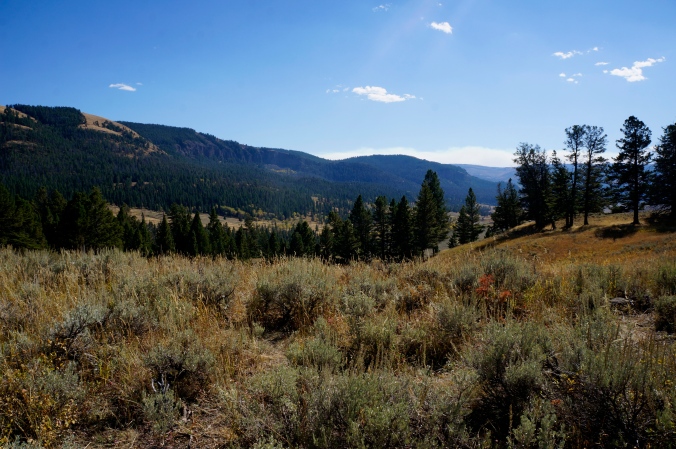 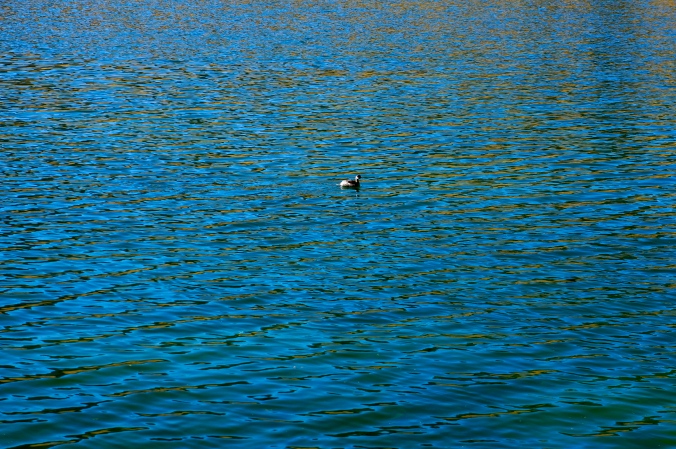 Dipping our toes in Lamar River, where tons of people were fly fishing, which is so fun to watch! 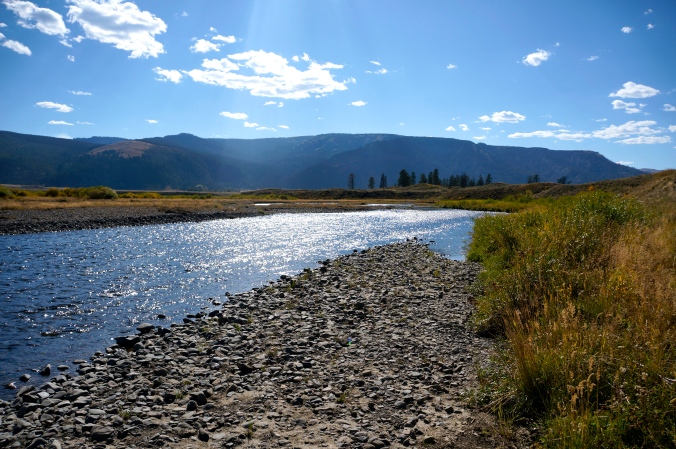 The prong-horn antelope in this picture practically blend right in — can you see ’em?! 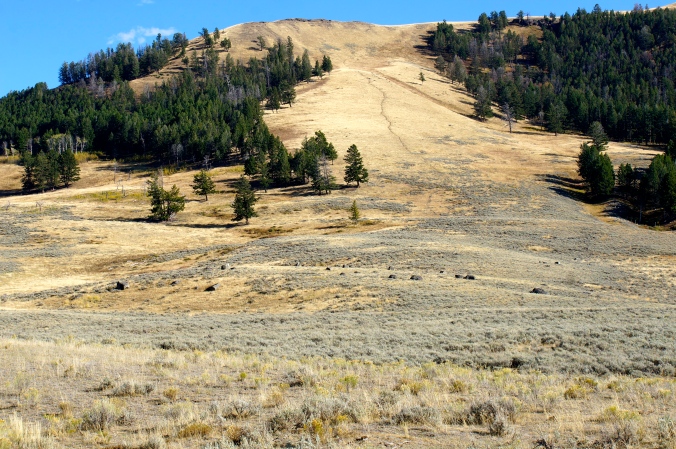 While the momma and baby bear was my favorite bear sighting, this was Chris’s. There’s a big ole’ grizzly in the middle of this photo (find him!), which some kind fellow watchers were nice enough to let us borrow their telescopes to see closer. He stayed in this field for hours, eating berries, chasing bison and just generally having a grand old time. It was really something to see. 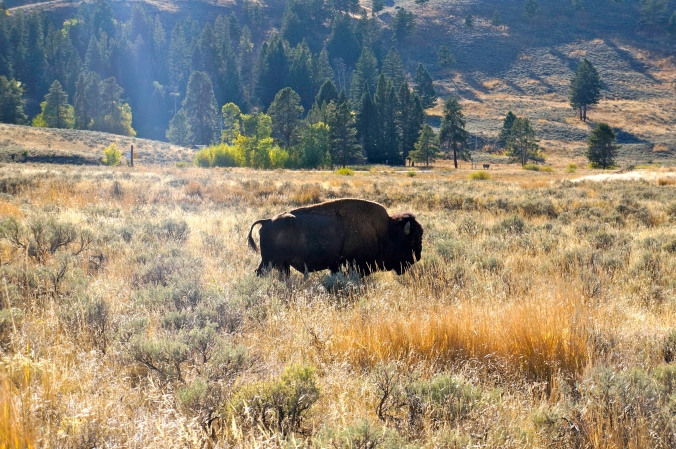 This bison and a friend of his wandered super close to our group while we were watching out for the wolves on our last night in Yellowstone. I was a tad scared, to say the least, but no one else seemed to mind, and he did end up minding his own business. Still, it was definitely a bit closer than I normally like to get to wildlife, unless I’m in my car. (Makes for good pictures, though!) 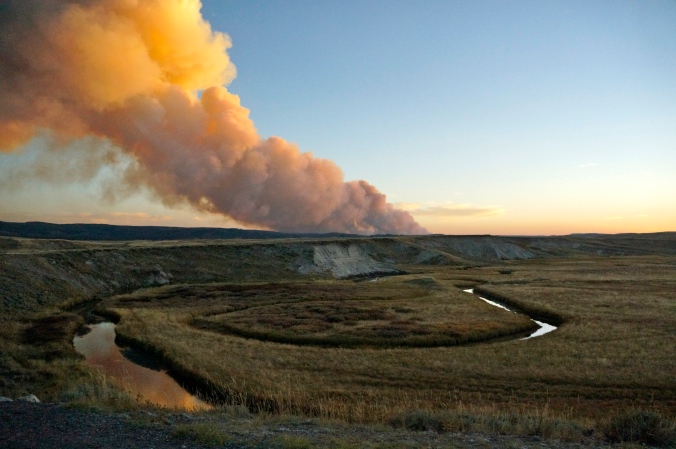 There was a fire that had been started by lightening the whole time we were in the park, but it was far enough away that it didn’t pose any real threat to the visitors just yet. The park has a “let it burn” policy, actually, as this type of thing is nature’s way of rejuvenating the land.

Cheryl was born in Nuremberg, Germany and grew up moving around every few years as an Army brat. The urge to travel has been with her her whole life. While she calls New York City home, Cheryl makes it a priority to travel as much as possible throughout the year. Some of her favorite places include Iceland, the Great Barrier Beef, Cabo, Rome, Calabria and Munich, although she hopes to never stop exploring. Cheryl blogs about her travel adventures (and what's happening in and around New York City) at Weary Wanderer.
Read More Share
Philadelphia's Historical Rittenhouse Hotel For Decadence & Pampering, Even For Pets
Michael Mina's Wit & Wisdom on Baltimore's Waterfront Boasts Views & Exquisite Food