I was in my office late one night in 1999 not wanting to be bothered.

The phone rang, and I wanted to ignore it . . . but I felt compelled to answer.

Before I could start, a child’s voice blurted,

It was the last thing I had expected to hear. 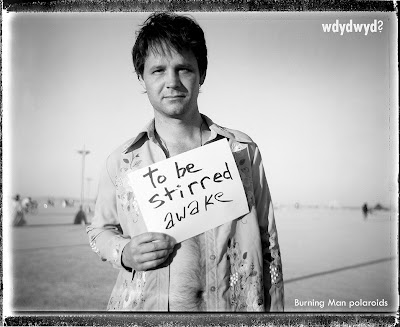 The kid was simply on assignment from his school teacher to interview someone from a community service agency. He looked in the Yellow Pages and landed on my phone number.

At the time, I worked for a non-profit organization, and I was used to explaining in grand and overly sophisticated terms why the organization that I worked for did what it did — it’s how we go funding. I had become good at talking to funders and writing grants with big theories and detailed plans. Yet, I had lost touch with the simplicity behind an unnecessary amount of complexity.

I found myself at work way too late trying to figure out some way to explain to a 12 year old why I worked for a youth-media organization and why it was important for people to create their own images, video and music (keep in mind that this was in 1998 before all this user-generated content stuff). Meanwhile, I was trying to remember if it was, in fact, important and what else might I be doing instead. Why was I doing this? I came up with something that sounded convincing to me. But, I’m a bit embarrassed to say that it was harder to answer than I expected.

I’ve thought about that phone call many times, and that question chases me around still. It’s a really simple question, yet so much depends on it. Starting in the summer of 2004, Mardie Oakes and I started asking other people this question. People often say they don’t have time (or) don’t know what to answer (or) give a flip response to make fun of a question that they unknowingly fear. Many times people avoid it altogether. Other times, people’s answers inspire us or just make us laugh.

One day, what if thousands of 12 year olds randomly called people and blurted:
“Why do you do what you do?”

In the meantime, we’d love to invite you to spread the question by answering it yourself in a photo & asking others. Or, you can Tweet your answers with the hashtag #wdydwyd & follow @wdydwyd on Twitter.

I’ll post the answers on We Blog The World.

Tony has spent two decades as an entrepreneur, organizational strategist and media-maker. He founded and led for eight years the Institute for Public Media Arts, a company that promoted “user-generated content” before there was a label for it. His work received recognition by the White House as a national model in diversity education. Tony was a fellow in the W.K. Kellogg Foundation’s National Leadership Program and has served on national boards including Active Voice, Kellogg Fellows Leadership Alliance and Social Enterprise Alliance where he co-chaired its public policy initiative. Tony was a founding board member of KaBOOM!, the national market leader for community-built playgrounds. Tony created the successful participatory-art project wdydwyd?, which challenges people to answer the question, “why do you do what you do?” In 2007, he published Seeing Beyond Sight (Chronicle Books), an award-winning book of photography by blind teenagers that was in the New York Times Book Review and the Los Angeles Times and featured on KQED’s The Forum with Michael Krasny. As unusual as “blind photography” may sound, Tony draws broadly applicable lessons from it to talk about leadership and innovation and challenges people to consider what they see and don’t see.