A Pueblito with a Past 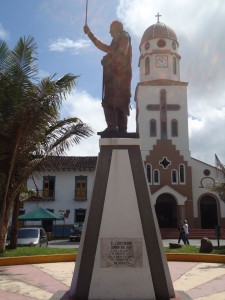 A three and a half hour bus ride from Manizales is the beautiful colonial style village Salento with it’s picturesque setting and mild weather.The town is quint and Miro and I immediately said it reminded us of Granada, Nicaragua despite it’s vastly different climate. But the things we thought were familiar we soon we discovered were very different as Salento was clearly an artisan’s town, as we were eager to learn more out it’s history. Salento is surrounded by stunning views of the surrounding mountains and valleys and the people in this puebleto seemed especially friendly. However, we couldn’t notice, for such a small place there sure seemed to be a lot of fellow ‘gringos’ in town.

It is as if the very air that buffets through the rolling countryside in the Colombian coffee department of Quindio is laced with the aroma of coffee. It may just be that here one cam sample a perfect brew whether it be in one of the bohemian cafes along the Calle Real or at an authentic coffee finca found nestled on hillsides and in valleys all about the region. 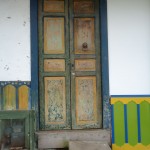 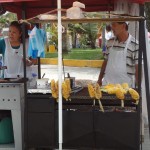 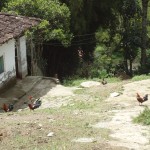 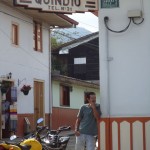 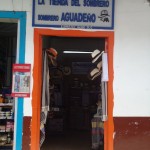 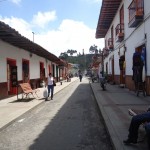 We stayed at a hostel called Tralala. The dorm was filled with visitors from across the globe and the gardens were lovely. The owner, Hemmo is from Holland, and we actually had the opportunity to meet him in Manizales weeks before when he came to Base Camp Hostel, where we were staying.

And I’m always making friends, wherever I go.

Located almost equidistant between the cities of Armenia and Pereira in the north-eastern corner of Quindio, Salento holds the honour of being the first contemporary settlement in the region established in 1851. Salento was a key stopping point on the route from Bogota to Popayan in the south and indeed Simon Bolivar, on one of his campaigns in 1830, travelled via Salento over the Quindio Pass.

In the colonial era, the main route from Popayán to Bogotá travelled over the Quindío Pass, going through the current-day site of Salento. In 1830, Simón Bolívar travelled the route and, for its poor condition and strategic importance, ordered that it be upgraded. However, work did not start until 1842 after the Guerra de los Supremos. Political prisoners from that war were sent from Panamá, Antioquia and Cauca to upgrade and maintain the road. After completing their sentences they were given a block of land in the region.The site of the penal colony was known as Barcinales, located where Salento is today. However, the main settlement was in Boquía, where the Boquía Stream joins the Quindío River. Families of the prisoners arrived and built their houses in Boquía and developed farms upstream along the Quindío River in the Cocora valley.Sometime around 1854 a flood of the Quindío River destroyed the settlement of Boquía, and the survivors rebuilt their houses in Barcinales. They retained the name Boquía for the new settlement, changing the name of the original to Pueblo Viejo. In 1864 a census showed that Boquía had 581 inhabitants. The occupational breakdown comprised: 148 farmers, 2 carpenters, 1 blacksmith, 11 doctors, 1 lawyer, 2 taylors, 4 laborers, 11 merchants and 11 watchmakers.In 1865 Boquía was officially declared a municipality and its name was changed again to Villa de Nueva Salento. The name was given in memory of Salento, a region of Magna Grecia in the south of Italy. This year is considered the official foundation date.

Today Lainie considers herself a digital nomad who is living a location independent life. She and her son write and podcast their experiences from the road at Raising Miro on the Road of Life.
Read More Share
Australian English Cracks onto OED
I Ate My Heart Out in San Francisco