Each year, Lonely Planet chooses the world’s 10 “Best In Travel” destinations and though we might not be able to visit Colombia (#2 on the list) in person, there’s no reason we can’t explore the country through words — Short Walks from Bogota by Tom Feiling is your way through that understanding if aren’t traveling to Colombia anytime soon. 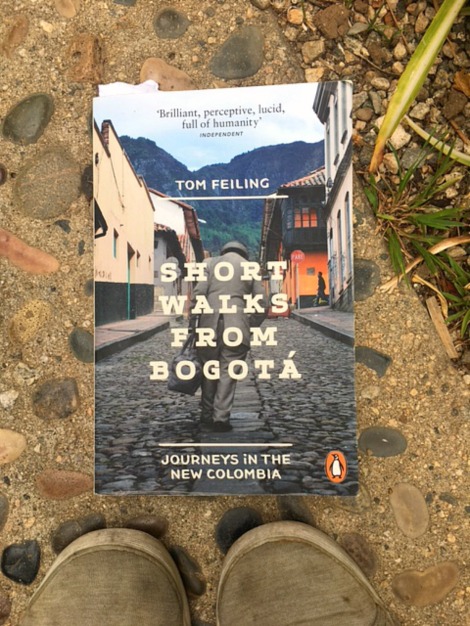 Unlike the travel writers he’s been compared to (Bruce Chatwin, for one), Tom Feiling makes no pretense about his narrative: he travels to Colombia in order to write a book.

Having lived there off and on for several years, the Englishman realizes that his countrymen (and, by extension, most of the world) know little about Colombia. International media reinforces a picture of anarchic crime, drugs and violence – but Tom Feiling remembers a very different – and more resilient – place. 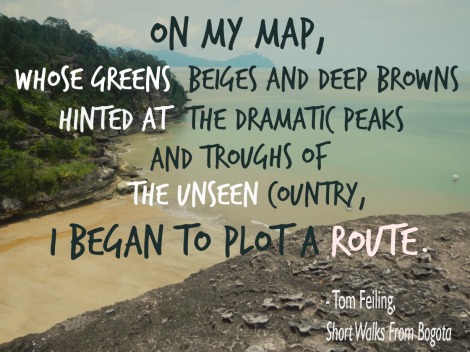 To rediscover the true aspects of this northwest corner of South America, Tom Feiling journeys to some of its most ill-reputed locations. Using old acquaintances as starting points, Feiling reaches out to victim and perpetrator alike, and uses personal stories to carefully whittle away the details of Colombia’s super-complicated past.

As he travels, it becomes clear that even locals fall under the spell of these fearful stereotypes. Massive inequalities exist, not just between economic and social classes, but between ideals and actual understanding.

The first time I visited Colombia in 1999, a man stopped me on the street in Cartagena and thanked me for ignoring the nay-sayers… Twelve years later, growing numbers of foreigners are discovering the bounty of Colombia. Despite the ragged contours of its national history, it seems destined to emerge from its years of solitude… The world is in for a treat when it does.

After landing in Bogota, Tom Feiling heads southeast to the plains around San Jose del Guaviare, where he introduces us to Colombia’s remaining ethnic tribes. Then on to the Santander region, in search of the imaginary town featured in native writer Gabriel Garcia Marquez’s novel, One Hundred Years of Solitude.

Catching a boat upriver, Tom Feiling travels through the Magdalena Medio, speaking to locals about the guerrilla, paramilitary and political groups still fighting. He becomes bogged by grey weather on the narrow La Guarjira desert peninsula, and rests his walking shoes in the mountains of Boyaca, before circling back to Bogota.

Jaunts by Tom Feiling are weighted with historical dates, names and connections. So if you’re expecting a lightly observant, anecdotal chapter book, look elsewhere. This is the sort of journalistic achievement that could easily require personal notes in the margins. (Or at least a scrap of paper to keep track of all the organization acronyms; FARC is but one of many…) 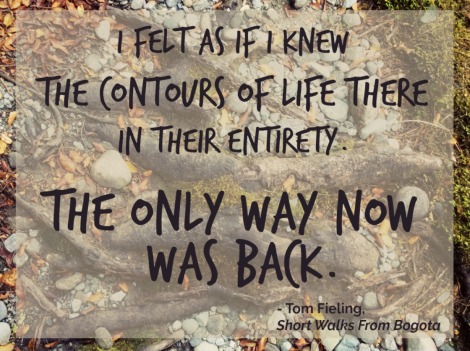 Luckily, being a professional writer means Tom Feiling has an ear for both fact and fiction. He uses the landscape to shape a national history that is at times unbelievable, and at other points, terrifyingly real.

You get the sense that Tom Feiling doesn’t want to cover up any of Colombia’s bruises – he wants to enlighten us as honestly as possible. And not just because it’s his job, but because he cares about the country.

So consider this book a form of therapy. If you’ve been too afraid to visit here (or similarly ‘unstable’ regions), open up Short Walks by Tom Feiling and let it challenge your conceptions of safety.

I promise, by the time you make it through the those dates and names and connections, you’ll have a new appreciation for the people behind all those nasty news headlines. Or at least the realization that travel involves learning, not just leaving.

Also be sure to read these articles: The Colombia You’ll Never Want to Leave and 10 Reasons Why Colombia Needs to Make Your Bucket List.

Have you read this book? What’s on your Colombia travel reading list?

Kelli Mutchler left a small, Midwest American town to prove that Yanks can, and do, chose alternative lifestyles. On the road for five years now, Kelli has tried news reporting and waitressing, bungy jumping and English teaching. Currently working with Burmese women refugees in Thailand, she hopes to pursue a MA in Global Development. Opportunities and scenes for international travel are encouraged on her blog, www.toomutchforwords.com.
Read More Share
A Sweet & Melancholy Nod to the Empire State’s Beauty
The Toll House for Modern Charm in Los Gatos California