For many people, Cartagena, Colombia first appeared on the radar at the 2012 Summit of the Americas, when the rightful 45th President of the United States made headlines for dancing and drinking at a local bar called Cafe Havana.

Although I traveled to Cartagena just weeks after the event—and although I am, for what it’s worth, a huge fan of Hillary—I didn’t make a point of visiting Cafe Havana and retracing Clinton’s footsteps. I did have just as great a time as Hillary did in Cartagena, however, and that’s what this article is all about—a captivating Cartagena itinerary, whether or not you like to get down, and regardless of how many days in Cartagena you ultimately decide to spend.

Where to Stay in Cartagena

Cartagena has traditionally been an affordable place, as Caribbean destinations go, but with increased tourism has come increased prices. Still, you can find a bargain no matter where you stay. If you’re interested in seeing Cartagena’s heritage architecture, you should stay inside the Walled City (more on that in a moment), where budget travelers should book a room at Casa Alejandria. For a more luxurious Cartagena itinerary base, splurge at Hotel Casa San Agustin or, if you want to stay in Bocagrande (Cartagena’s answer to Miami) sleep at Cartagena beach hotels like Penthouses Palmetto.

How to Organize Your Cartagena Itinerary

Day 1: The Walled City and the Castle

Although the Cartagena metro area is huge, both in population and in land area, the portion of the city with which most travelers are concerned—the Walled City of Cartagena, dating back to the 16th century—is very small.

The good news is that all of Cartagena’s best lodging is located within this part of the city, which makes exploring it extremely easy, whether you do it by day, strolling down bougainvillea-line streets and dining at charming cevicherías, or walk up onto the wall itself in the evening, and use it as a vantage point for watching sunset.

And people, although I should include a word of caution: I was photographing some beautiful local women with the setting sun and pink sky in the background, or so I thought. As it turns out, it was Cartagena prostitutes photos I was taking—and they weren’t having it.

The old city is chock full of history—tip: Hire one of the official tourist guides near Cartagena’s Clock Tower gate for a half-day Cartagena walking tour that feels like a documentary, spotlighting not only popular attractions like Cartagena Cathedral. Then, cap off the day you devote to exploring it with a visit to Castillo de San Felipe de Barajas, which was commissioned by the Spanish crown and took over 100 years to build. One of your Cartagena itinerary down, two more to go! 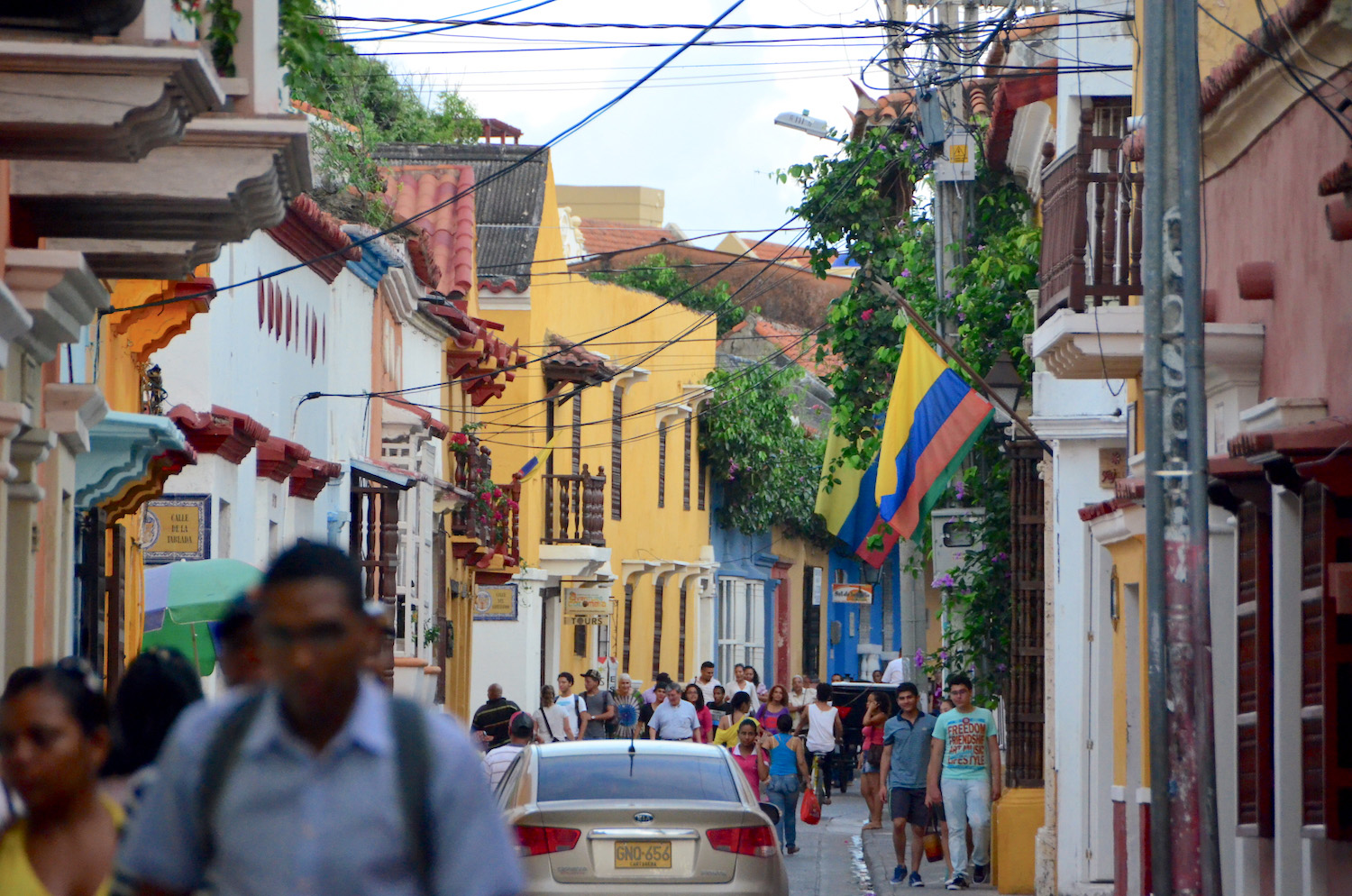 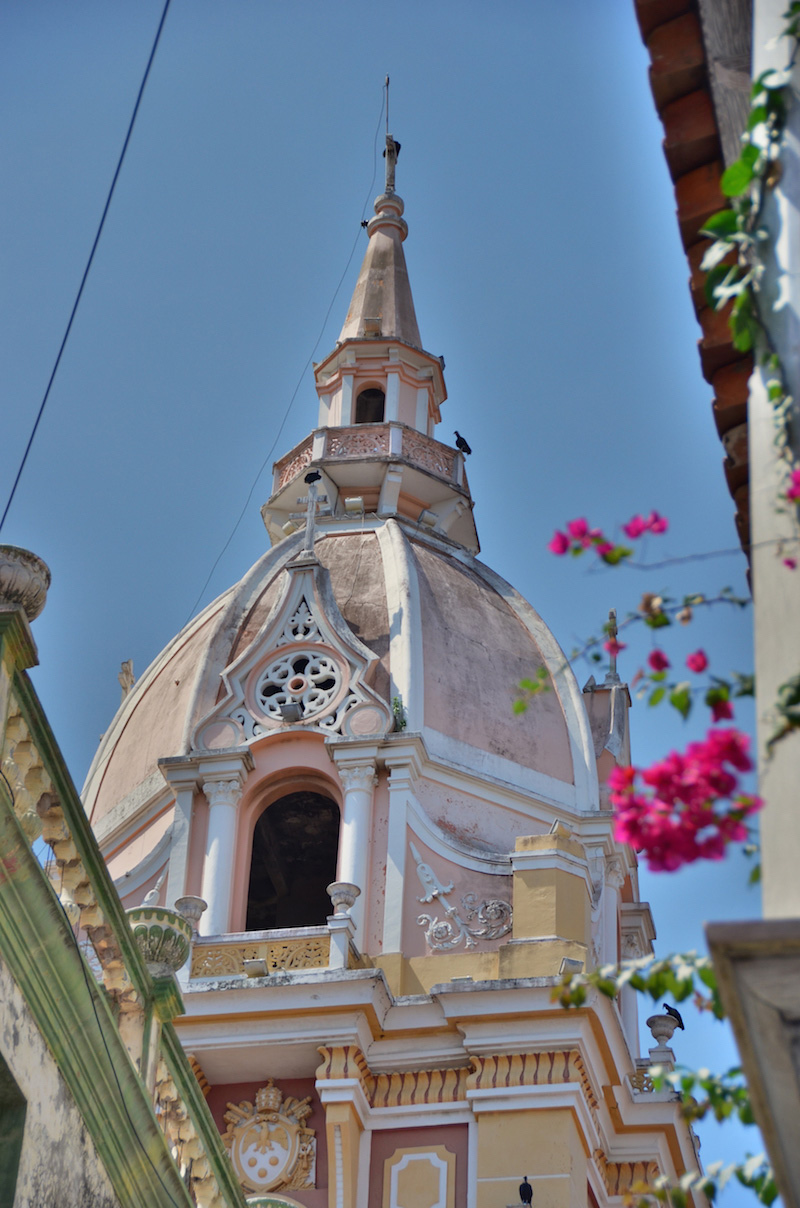 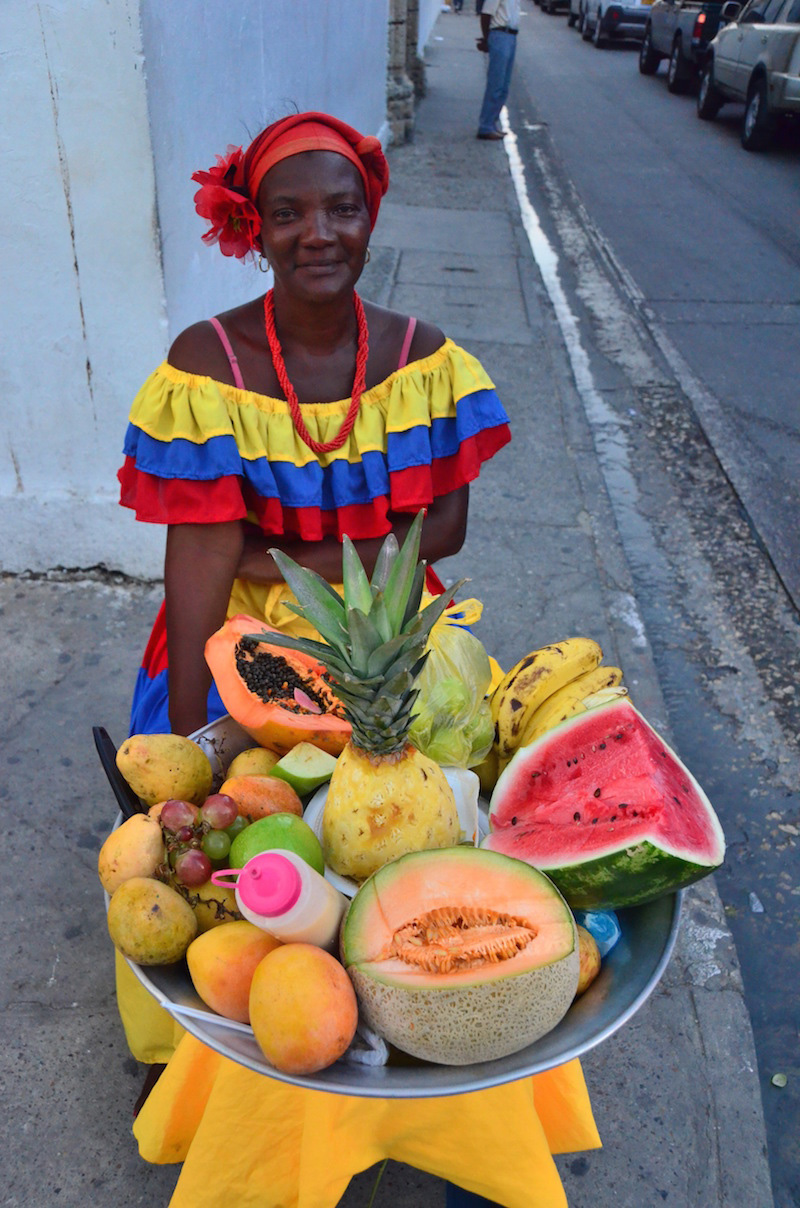 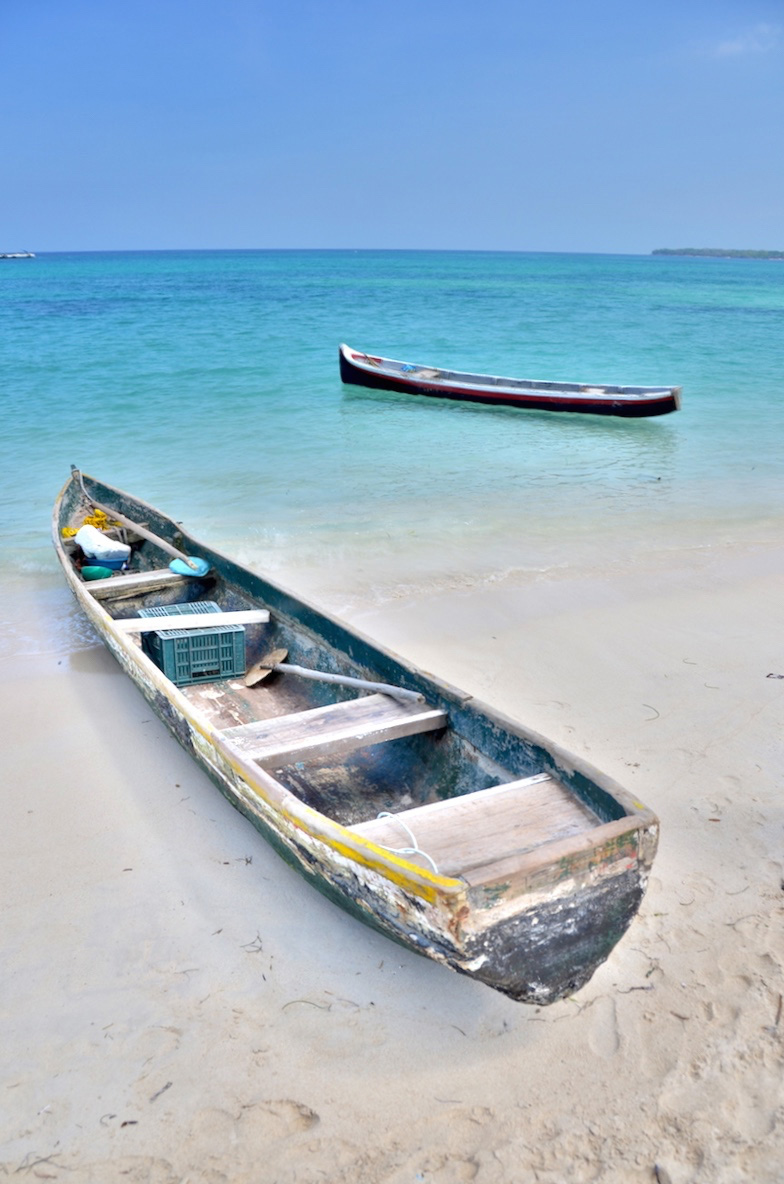 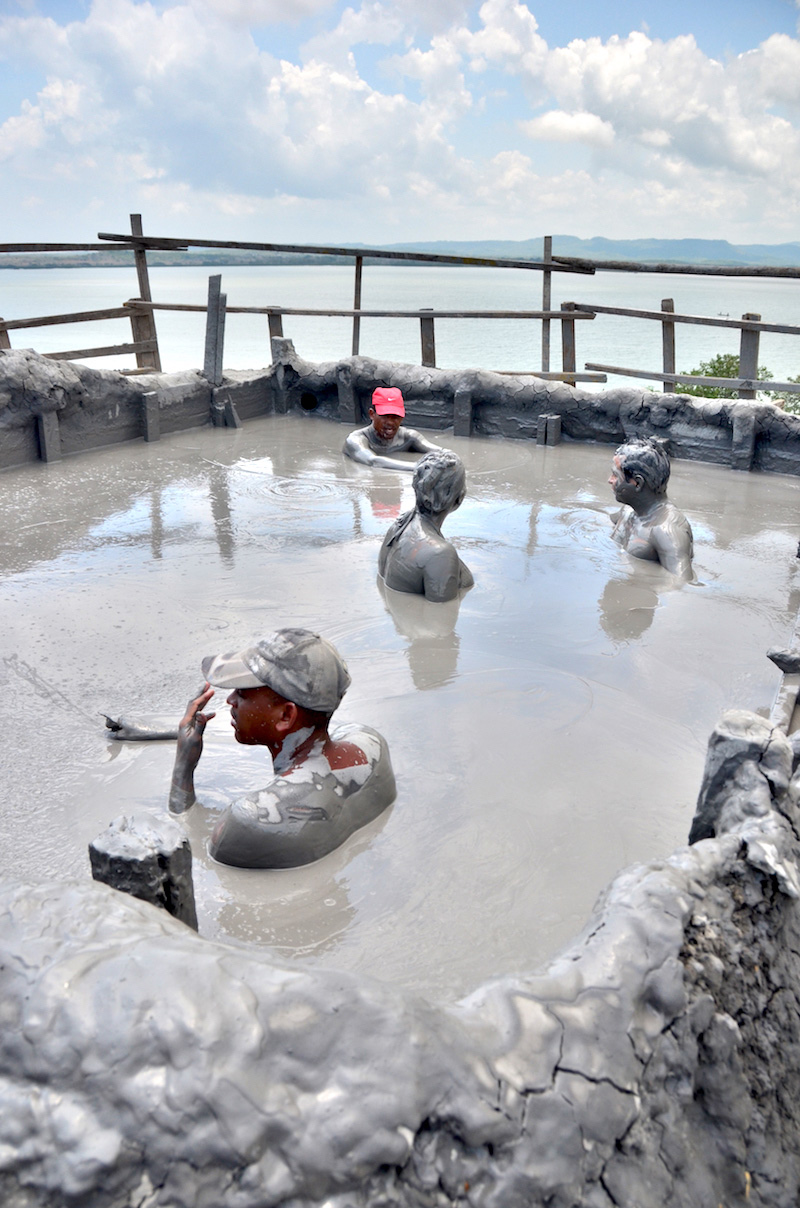 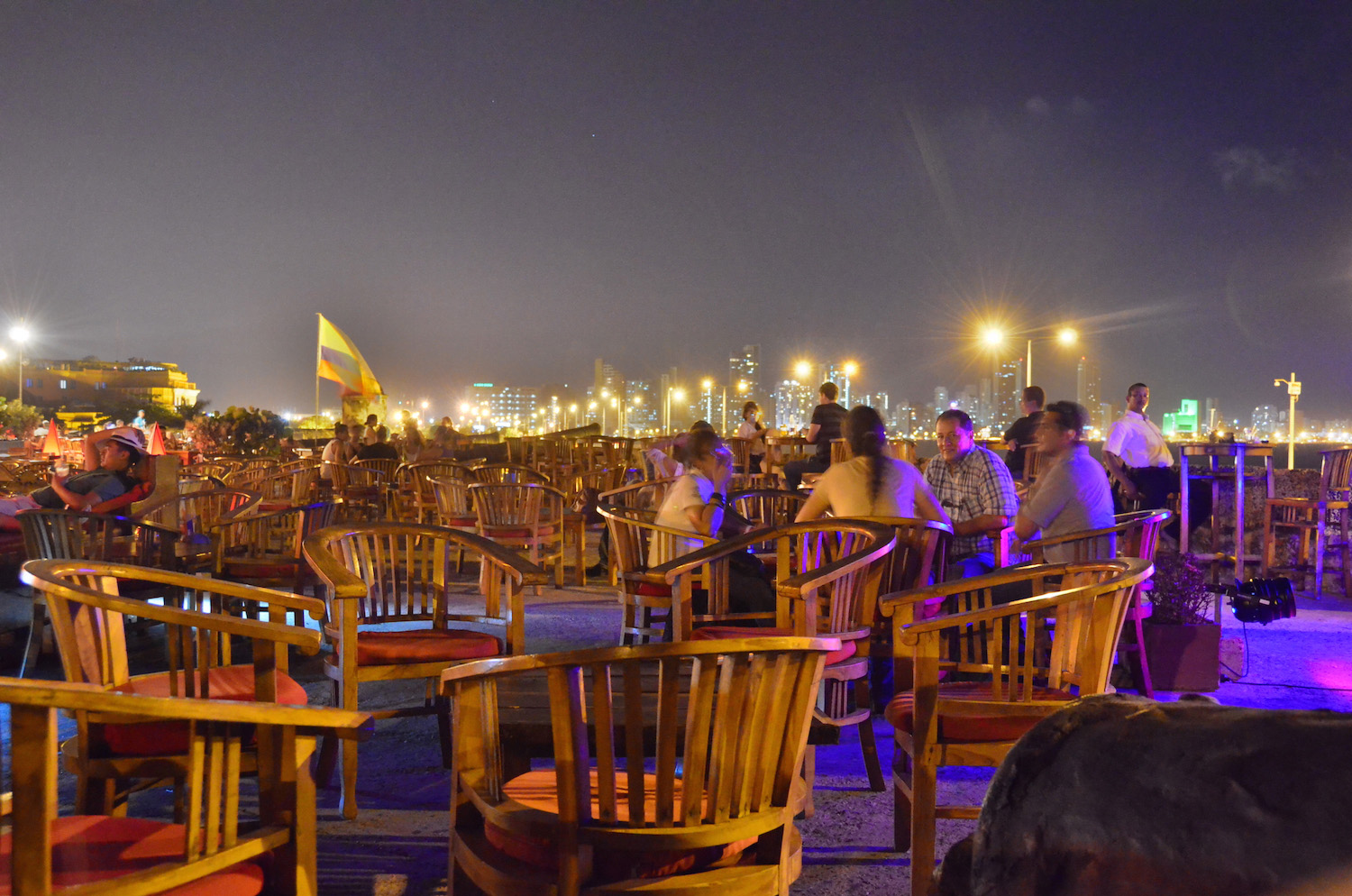 One thing that surprises many visitors to Cartagena is that much of the urban area around the old city is, well, kind of disgusting. That’s the bad news.

The good news is that, because Cartagena is situated on Colombia’s Caribbean coast, you don’t have to travel far outside the city to arrive quite literally in the wild. Well mostly good news: It can make the issues of how many days in Cartagena you should spend a more difficult one to resolve.

I initially considered not visiting Totumo Volcano, because many fellow travelers I met in Cartagena said they had been disappointed by it. But I’m glad I did make the trek, if only for the incredible views I enjoyed from the top of the volcano. (Nor was the Cartagena mud bath—having a sexy Colombian man rub mud on me wasn’t a terrible experience, either.)

Whether you rent a car to get to the volcano, or go on an organized tour with your hotel and hostel, make sure and get back to the city before sunset so you can enjoy a local song and dance performance by the Clock Tower gate. Then, if you’re not too tired from a long day in the sun, head to Cafe del Mar at the northwestern corner of the old city walls to enjoy sunset drinks. Stay safe, however—most crime in Colombia befalls drunk tourists!

Another major complaint visitors to Cartagena have is that the city’s beaches are…um…horrible. Thankfully, if you have more than 2 days in Cartagena, they are also avoidable: Simply book a boat from the Cartagena marina, just past the Clock Tower, to Isla de Baru, one of the popular Cartagena islands where you’ll find the idyllic Playa Blanca, one of the Cartagena best beaches without a doubt.

I’ve listed Playa Blanca among Cartagena day trips, because you can easily do a day excursion there, but the fact is that many people arrive and don’t want to leave. One travel I’d previously met in Santa Marta, just prior to camping in Parque Tayrona, was wrapping up five days on Isla de Baru when I ran into him there.

An alternative beach option if you have more time—and money—is to head to San Andrés island, which is accessible by plane or a very long boat ride. Because of the distance and cost associated in getting there, however, you should set aside at least a few days if you plan to visit the island.

Unfortunately for LGBT travelers, the only gay beach Cartagena seems to offer is whichever one you find gays on. Colombia’s gay scene actually disappointed me in general, and this was no exception.

How many days should you spend in Cartagena?

As you can probably tell reading through this post, my original answer for how long to spend in Cartagena was three days. With some exceptions, I think this is an ideal amount of time in the city, as it afford you one full day in the historical center, two day excursions (one each to inland and offshore activities), with an evening each atop the old city walls in the Miami-like Bocagrande.

Other FAQ About How Many Days to Spend in Cartagena

Is Cartagena worth visiting?

Regardless of how many days in Cartagena you end up spending, Cartagena is absolutely worth visiting. If the ornate, colonial architecture of the old town doesn’t charm you, the location along the Caribbean and day trips out to paradise islands will. Moreover, Cartagena is a jumping-off point for journeys to Tayrona National Park, one of Colombia’s natural jewels.

What is the best time to go to Cartagena, Colombia?

The weather is best in Cartagena from December to April, which is the window outside the active tropical season in the Atlantic Ocean and Caribbean Seas. Shoulder months like May and November are also good choices. A slightly higher risk of hurricanes or tropical storms should pay off well compared to lighter crowds and lower costs.

Should I visit Medellin or Cartagena?

I might be the only American millennial who says this, but I vastly prefer Cartagena over Medellin—and not just because of how much I prefer balmy beach air over chilly mountain breezes. Cartagena is all around more beautiful, and what it lacks in cool co-working spaces, it makes up for with an authentic and genuinely multicultural feel with which Medellin simply can’t compete.

No matter how many days in Cartagena you have, this magnificent city is worth all the hype it’s generated. Whether you spend two, three or 4 days in Cartagena, the mixture of history, scenery and culture on offer in and around the hub of Colombia’s Caribbean coast is intoxicating, particularly if your Cartagena itinerary part of a larger Colombia trip.

Robert Schrader is a travel writer and photographer who's been roaming the world independently since 2005, writing for publications such as "CNNGo" and "Shanghaiist" along the way. His blog, Leave Your Daily Hell, provides a mix of travel advice, destination guides and personal essays covering the more esoteric aspects of life as a traveler.
Read More Share
Mt. Belford, a Vigorous 14,000 Foot Hike
Planning for Guadalajara