I spent the summer between kindergarten and first grade hunting butterfliesand was fascinated by the monarch butterfly. Armed with a net my dad had rigged up for me out of a five-foot dowel and a yellow minnow bucket, I rode around my one-street Missouri subdivision in search of monarch butterflies as well as swallowtails and sulphurs.

And, during the waning weeks of warmth, especially the elusive monarch. “Hunting,” looking back, wasn’t an appropriate term. Although I caught the butterflies and sometimes kept them overnight so that I could sketch and study them, I never killed a single one, not even by accident—I revered my winged friends.

Last freezing Friday morning, I left my vacation rental in Mexico City’s La Condesa neighborhood before the sun came up, and it was still pitch back when I arrived at Poiniente bus terminal, although I could no longer see my breath. When dawn finally did break I was just about to cross over into the state of Michoacan.

Light rays painted the misty fields and jagged mountaintops of the borderlands a brilliant orange, not unlike the wing color of a monarch. But the sky was solid blue when the bus pulled up to Zitácuaro and I hopped in a taxi, my final destination—Cerro Pelon, the mountain where many a Mexico monarch tour takes place—taunting me from the horizon line. It was nine by the time I arrived at the mountain’s base in Macheros, a town you could easily miss if you weren’t paying attention—thankfully, my driver was. 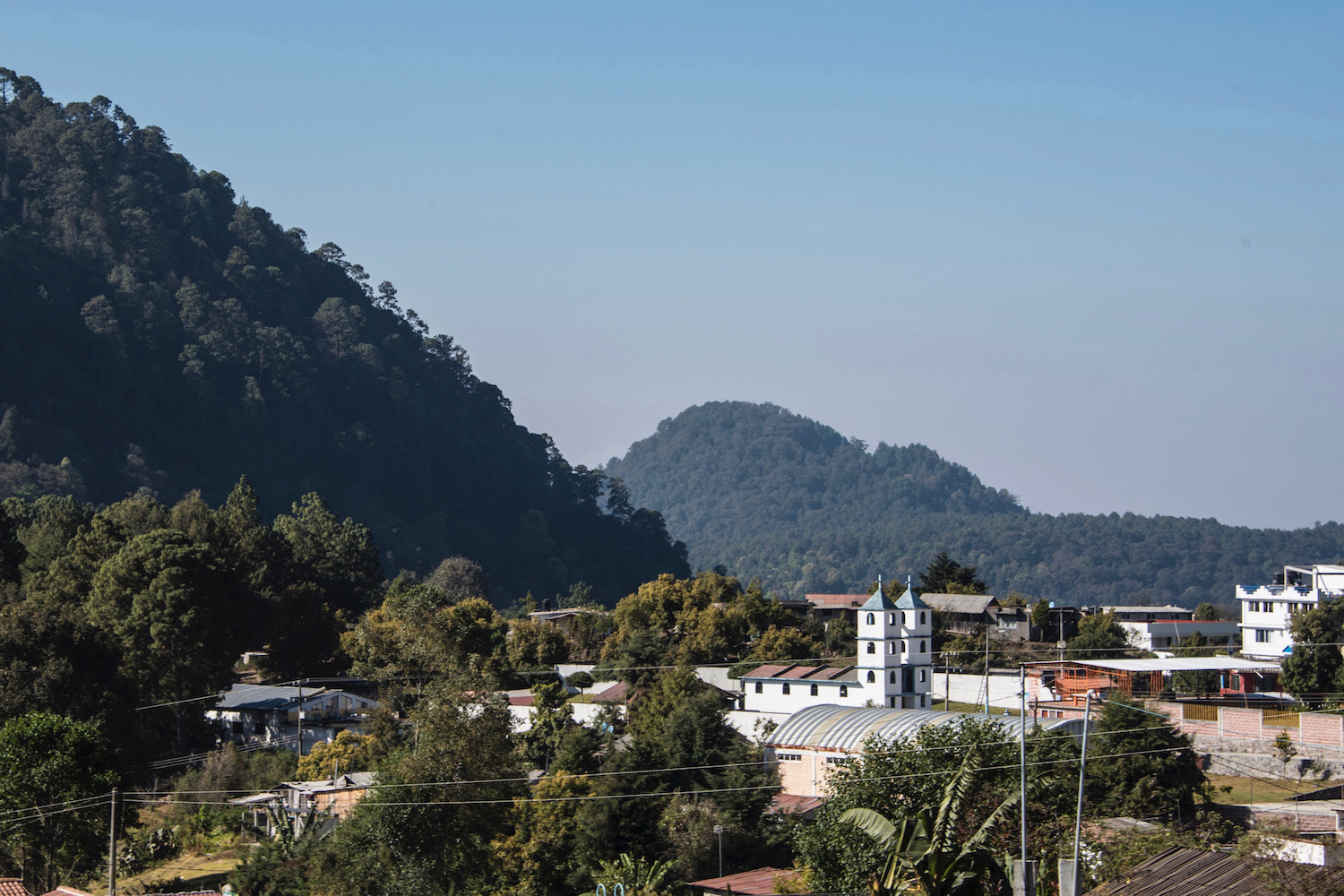 I spent countless hours scouring the neighbors’ flowering bushes for them, but monarchs were a rare sight in my one-street subdivision, even relative to their seasonality. Compounding this was the fact that monarch-mimic viceroys showed up and left around the same time as their more worthy cousins.

The arrival of the monarchs (and, by extension, the viceroys) was bittersweet, especially in retrospect. They were the most beautiful catch of my season; they also heralded its end. Just as they grew abundant enough in number to guarantee a sighting, it was time to go back to school, and while I had my weekends and nights (at least through September and the first week or so of October), it soon grew too cold for my taste—and too dark for my mother’s—for butterfly hunting to continue being feasible.

“I don’t remember its name in Spanish,” the man across from me at breakfast in the butterfly-themed guesthouse just outside the entrance to the biosphere confessed. “But it translates to ‘The Boy Who Had Wings,’ and talks about a little boy whose unique gifts are more of a burden than a blessing.

Immediately, I thought back to the letter my mother had written me the day I left for college, which opened with her recalling a little boy whose own wings had once weighed him down. “I’ll be getting that for her birthday,” I committed as I made a note of the title in my phone.

I later discovered that the book was written in English but simply translated into Spanish, which doesn’t surprise me given that the next topic the man engaged me in concerned a global conspiracy theory co-engineered by Bill Gates and an unnamed Monsanto executive.

Just then, the owner of the guesthouse announced that the butterfly guides had arrived: It was time to ascend Cerro Pelon. 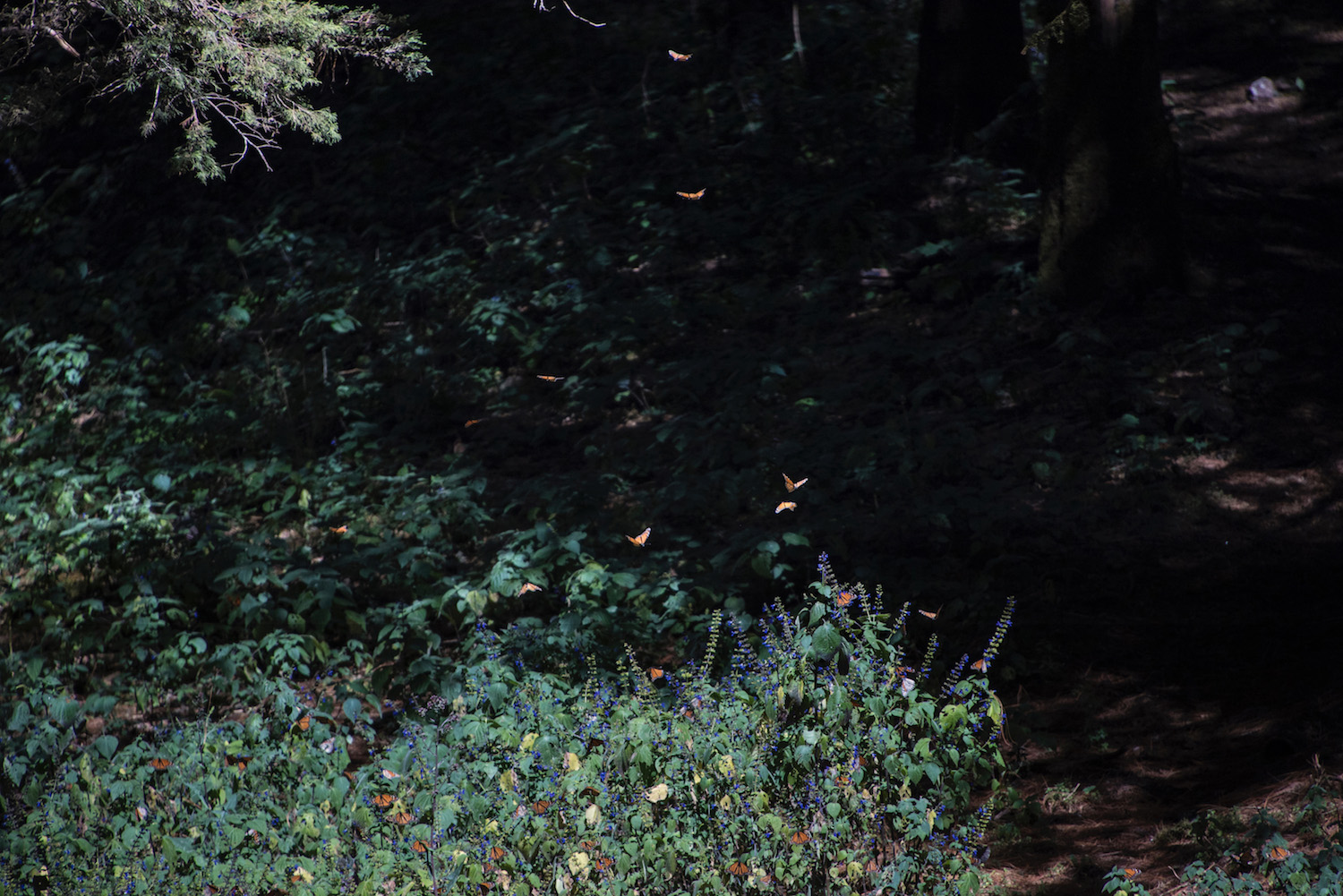 The monarchs, along with the remainder of the warmth and light, were gone before I realized how much I missed hem. Although my dreams (and sketches) of them helped counter the emptiness that remained when they fluttered away, I wound up devoting less of the subsequent summer to my butterfly hunting pursuit.

What I didn’t know, neither that spring when the first skippers fluttered in, nor when I started seeing monarchs on a regular basis around the first day of second grade, was that my family would be leaving our St. Louis suburb for a homestead on the outskirts of Detroit in mid-November.

There were no butterflies that far north, not at this time of year at least. Worse, suddenly being the new kid had seen me go from being a well-liked member of the student body to a bonafide laughing stock, will all the grief and abuse that entailed.

These parallel winters did eventually end, but there was nowhere in my new neighborhood to hunt butterflies. And no telling what the other kids would do to me if they spotted me, riding around like some kind of white trash superhero with my net and bucket.

My mother, for her part, planted butterfly bushes and milkweed in our back garden. For mine, I came upon a book in the school library one day (a magazine, actually—the “Butterflies” issue of Kids Discover), which concisely explained why I only saw my beloved monarchs for such a short time every year.

After detailing their somewhat complicated life cycle, it mentioned the insects wintered in the mountains of central Mexico, and showed photos of thousands of them clinging to pines like nectarine-colored needles. 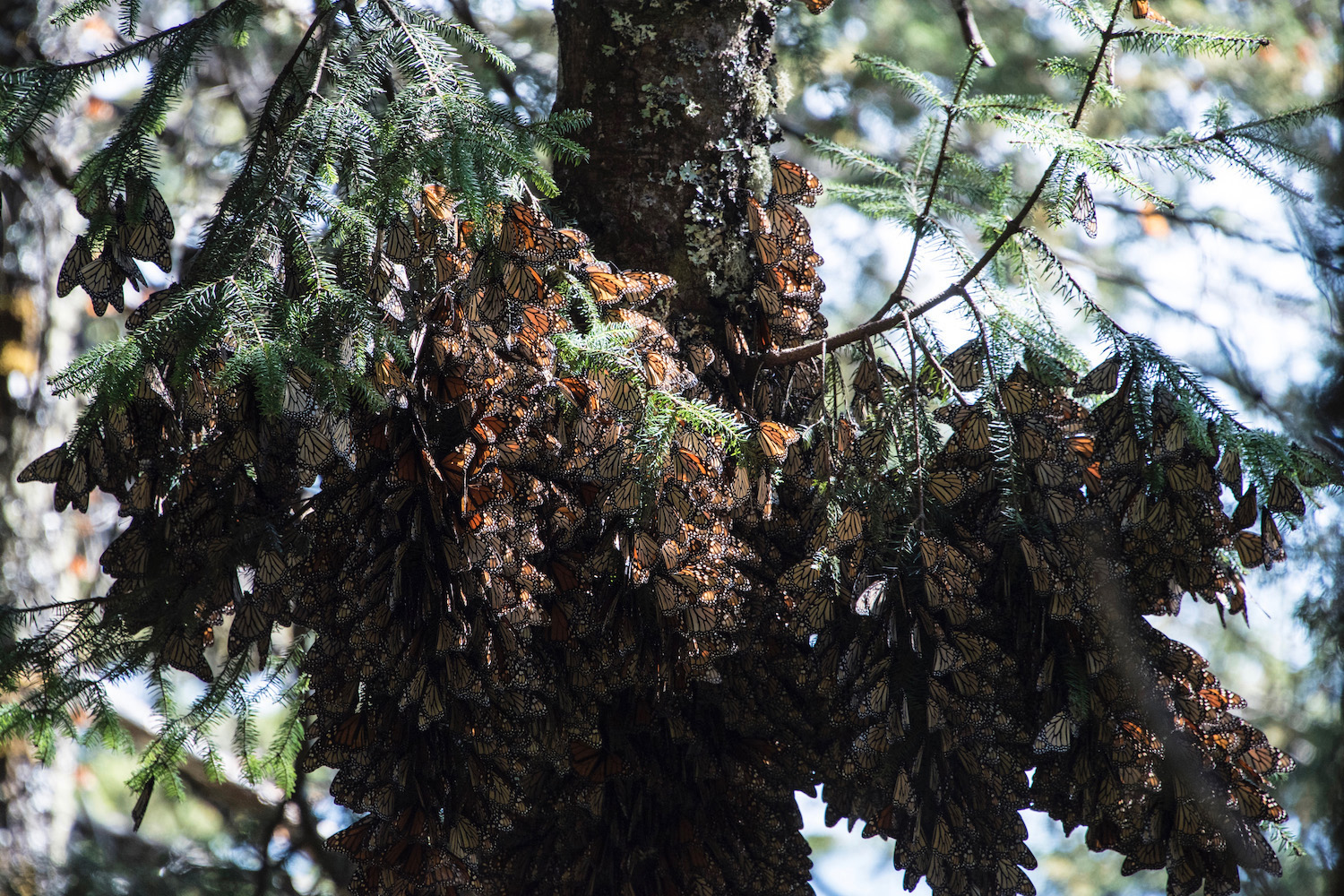 I feel pity riding horses on a good day, but I was in something of a mood by the time I mounted mine at the base of Cerro Pelon.

The corporate conspiracy baton had been passed to another member of the group, who lamented the fact that the World Wildlife Federation (funded, apparently, by richest-man-in-the-world Carlos Slim) has had a monopoly on data and research related to the butterflies since their 1975 discovery by the team of Mexican-American researcher Catalina Trail.

Ay dios mio, I sighed, fully aware the phrase would be as meaningless to the gringo in the tin-foil hat as facts.

Anyway, the guide had told us our waiting steeds descended from Spanish mustangs, but mine was already panting half an hour into the ride up the bald-capped mountain; even before the path sloped sharply upward, he was sweating. I’d never seen a horse sweat, and I imagined he was suffering.

“Had I know this,” I quipped, without response or even acknowledgment from others in the group, “I would’ve walked.”

This was short-sighted, of course. Given that our starting altitude was over 3,000 meters, I’d have been lucky to make it up the mountain on foot in twice the time it took us, in spite of how adept I’d become at averting attitude sickness.

In fact, the five of us would ascend the last few hundred meters by foot, eventually arriving on a nondescript hillside where a not-so-taut piece of white string denoted a no-go zone: We’d need to avoid congregating under the trees where this particular colony made its home, even though some of them would inevitably fly down to where we were (and, in most cases, die shortly thereafter). 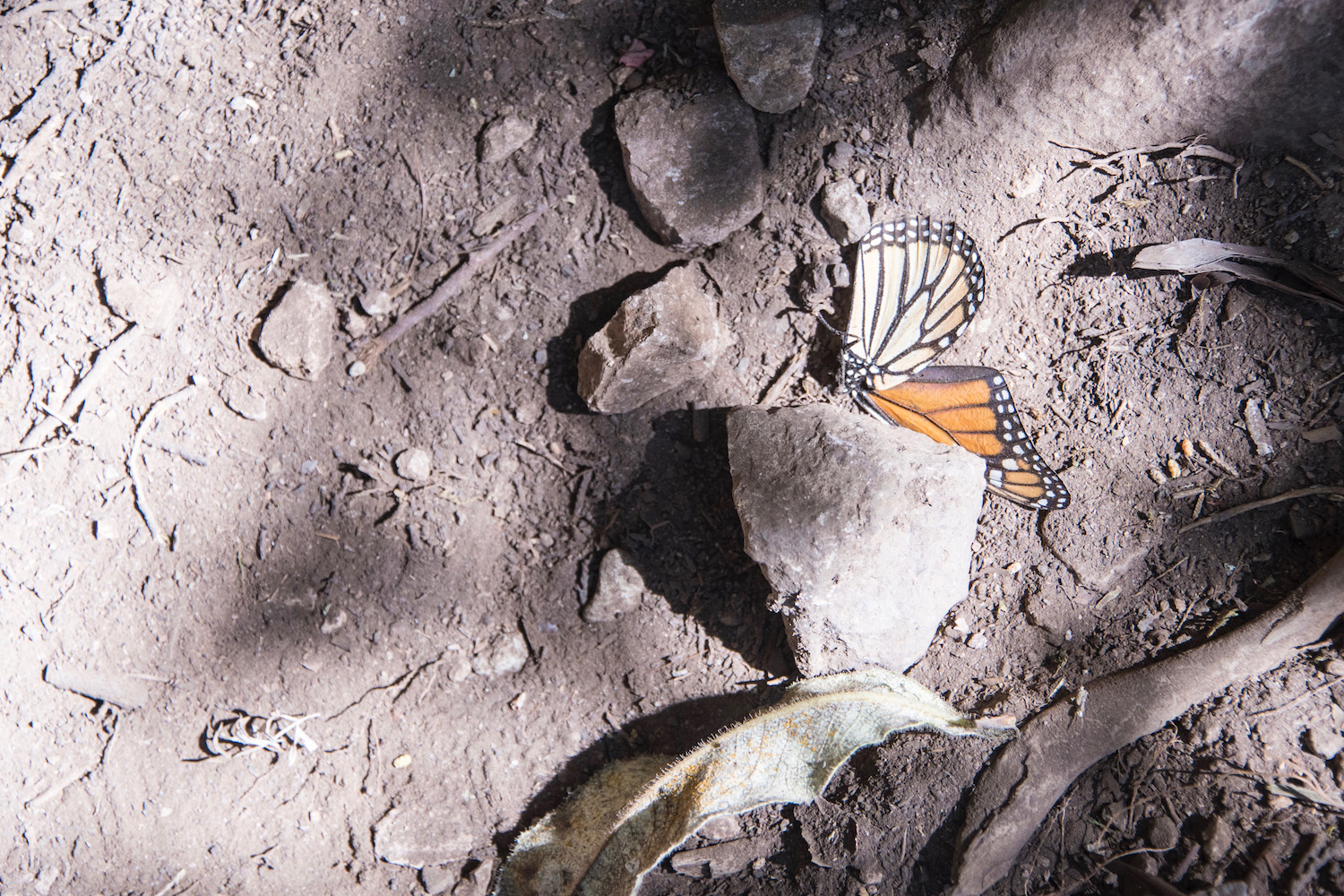 I spent a good couple of hours taking photos, which looking back seems as disrespectful to the monarchs’ presence as to the memory of my proverbial egg, larva and pupa stages. Eventually I packed my equipment back up, and laid on the ground like Bobby the Butterfly Hunter would sometimes do when he tired of hunting.

Once I lost count of all the fiery flashes that flew overhead, I imagined the look that would’ve come upon his face if he’d been able to see that many monarchs at once. How would the emotions surging through me have manifested themselves in his un-weary eyes?

I made my way down the face of Cerro Pelon, first by foot and then by horse, and then by taxi to Zitácuaro and bus to Mexico City, just as I’d come that morning. The sunset shone the same brilliant orange the sunrise had, although it appeared pink through the windows of the bus. Like the rose-colored glasses I’d hidden my tears behind as I drove away from my mother’s house 15 years ago, typewritten letter in hand, and in heart.

I thought again about the way she might react if I do end up sending her a copy of The Boy Who Had Wings, and wished I could somehow transmit its contents back to Bobby. I wondered if perhaps he still existed on some plane, and if he ever imagined that I might once day emerge form the chrysalis he hid in all those years. 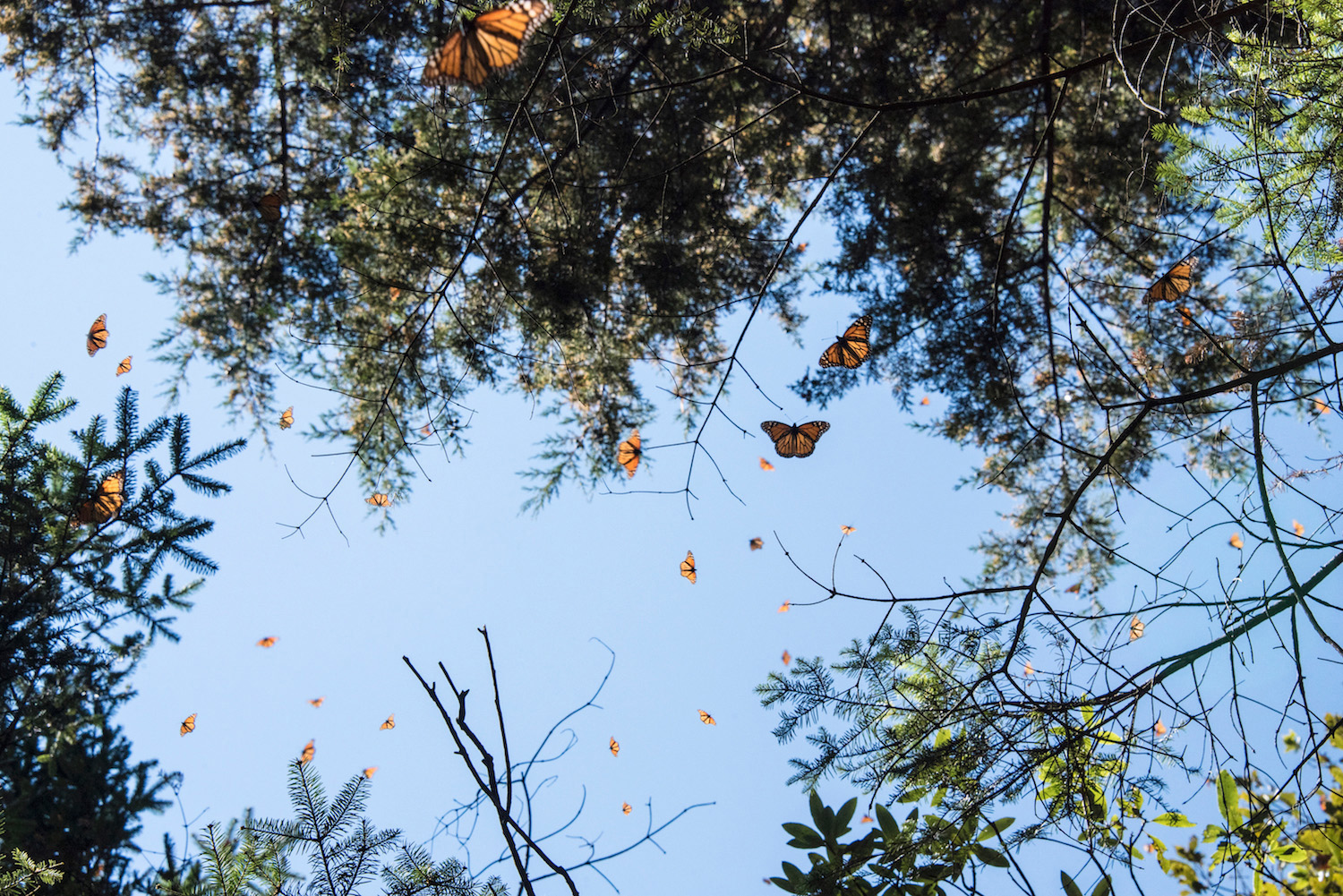 You need to have a guide in order to see the Mexico monarch migration, but you don’t have to be on an organized tour. You don’t even need to stay overnight: I visited the Mexico Monarch butterfly reserve at Cerro Pelon on a day trip from Mexico City.

As I described earlier in this article, this entailed taking a pre-dawn bus from Mexico City to the city of Zitácuaro, Michoacan, then taking a taxi to Macheros (which is technically in the State of Mexico). There I met with the couple who runs JM Butterfly B&B and also offers daily Mexican monarch butterfly tours to members of the public for $75 (or 1375 Mexican pesos). I got back to my Airbnb apartment at 8 pm on the dot, having left at 5 am.

Alternatively, many travelers take organized tours directly from Mexico City, but these are usually to the more popular (i.e. crowded) El Rosario Reserve.

Be sure to read our Mexico section for more fun stories on Mexico. Also, see the Culture & History behind the Day of the Dead Festival,  and see Malls & Plazas in Mexico City.

Robert Schrader is a travel writer and photographer who's been roaming the world independently since 2005, writing for publications such as "CNNGo" and "Shanghaiist" along the way. His blog, Leave Your Daily Hell, provides a mix of travel advice, destination guides and personal essays covering the more esoteric aspects of life as a traveler.
Read More Share
Jabra’s Ear Phones For Adventure & Sports Enthusiasts
South Lake Tahoe Makes a Great Escape From Bay Area