Is Pamukkale worth visiting? For me this was a no-brainer—I wanted to see Turkey’s “Cotton Castle” for myself the moment I saw a picture of it. Pamukkale literally means “cotton castle” in Turkish, is a natural site in Denizli and is renowned for its carbonate mineral left by the flowing

A friend I met in Istanbul wasn’t as enthusiastic. “Pamukkale is boring,” he said plainly, and without much elaboration. “It looks like Texas there.” He explained that I should instead focus my energy on visiting the Turkish coast and then Cappadocia, apparently unaware that both were already on my Turkey itinerary.

While I’d be lying if I said I considered canceling my trip to Pamukkale, even for a second, my acquaintance’s disparagement of the place did reset my expectations. Was I about to experience a castle-size disappointment? How I Got to Pamukkale

Pamukkale looks relatively close to Istanbul on the map of Turkey, but this is deceiving—and not just because Turkey is much larger than it looks. Although you might be flirting with traveling between Istanbul and Denizli (the city closest to Pamukkale) by bus or train, allow me to dissuade you: The only realistic way to reach Pamukkale, at least if you’re coming directly from Istanbul, is by flying to Denizli.

From Denizli Airport, you’ll board a bus (it’s the only one) to Denizli city; at some point the bus will stop on the side of the road, where a minibus will be waiting to take any Pamukkale-bound tourists the rest of the way. The man driving this bus, in my case, was extremely helpful and professional, and set my expectations for Pamukkale high up in the proverbial clouds. I wish I could tell you every aspect of my experience lived up to them.

It lives up to the hype

Certain, the travertine of Pamukkale itself was everything I hoped it would be. The best way I can describe it is a massive chalk mountain with cold and hot springs flowing out of it. Arranged in a half-moon shape, if you’re looking at it from above, it offers magnificent views of the surrounding countryside, its own beauty notwithstanding.

But not all its precise contours

If you Google “pictures of Pamukkale,” you’ll probably notice certain pools being spotlighted more often than others. Unfortunately, some of the most famous ones were totally dry when I was there; I heard many tourists complaining about this. Don’t be one of them: Just because a pool or two is dry doesn’t mean that it isn’t worth visiting.

The town leaves a lot to be desired

The travertine, I mean: The town of Pamukkale is a shit hole. While I met a few quality people (namely Murat, the taxi driver who helped me travel onward to Fethiye and Oludeniz), almost every other aspect of the town—if you can call it that—was awful and disappointing. First among this was Hotel Sahin, whose location was its only notable selling point.

Is it worth visiting? Yes, but only for the otherworldly Cotton Castle. The ruins of Hierapolis are average at best, consisting mostly of a medium-sized amphitheater. On the other hand, they might be just good enough for you, if you find yourself unable to visit Ephesus as I was—more on that in just a second.

You won’t tire of the travertine

I ended up staying three days which I feared even by the end of the first would be two too long. In fact, each trip up and down the travertine proved more satisfying than the last. From the ways the day’s light changes the colors of both the chalk and the springs, to the way even casual strolls can reveal new pools, this is a place I’ll never forget.

The Issue of Ephesus

For as long as I’ve been thinking about a trip to Pamukkale, I’ve paired it with the ruins of Ephesus in my mind. My early experience in the town seemed to justify this. Both at my hotel’s front desk as well as every travel agency I passed, Ephesus day trips were the top product advertised. I was so confident I’d be able to go that I didn’t even bother inquiring about it until the morning of my second day, an hour or so before I expected to depart.

As it turned out, this was not to be. The train from Denizli to Selcuk (the nearest station to Ephesus) had been suspended as a result of the coronavirus pandemic; there simply weren’t enough tourists in town for agencies to justify running group tours of their own. I could’ve taken a private tour, but even then everyone I spoke with recommended I spend one night amid the ruins, which would’ve been nice, but didn’t fit my schedule. Having seen more than enough ruins in my life, I abandoned my plans. 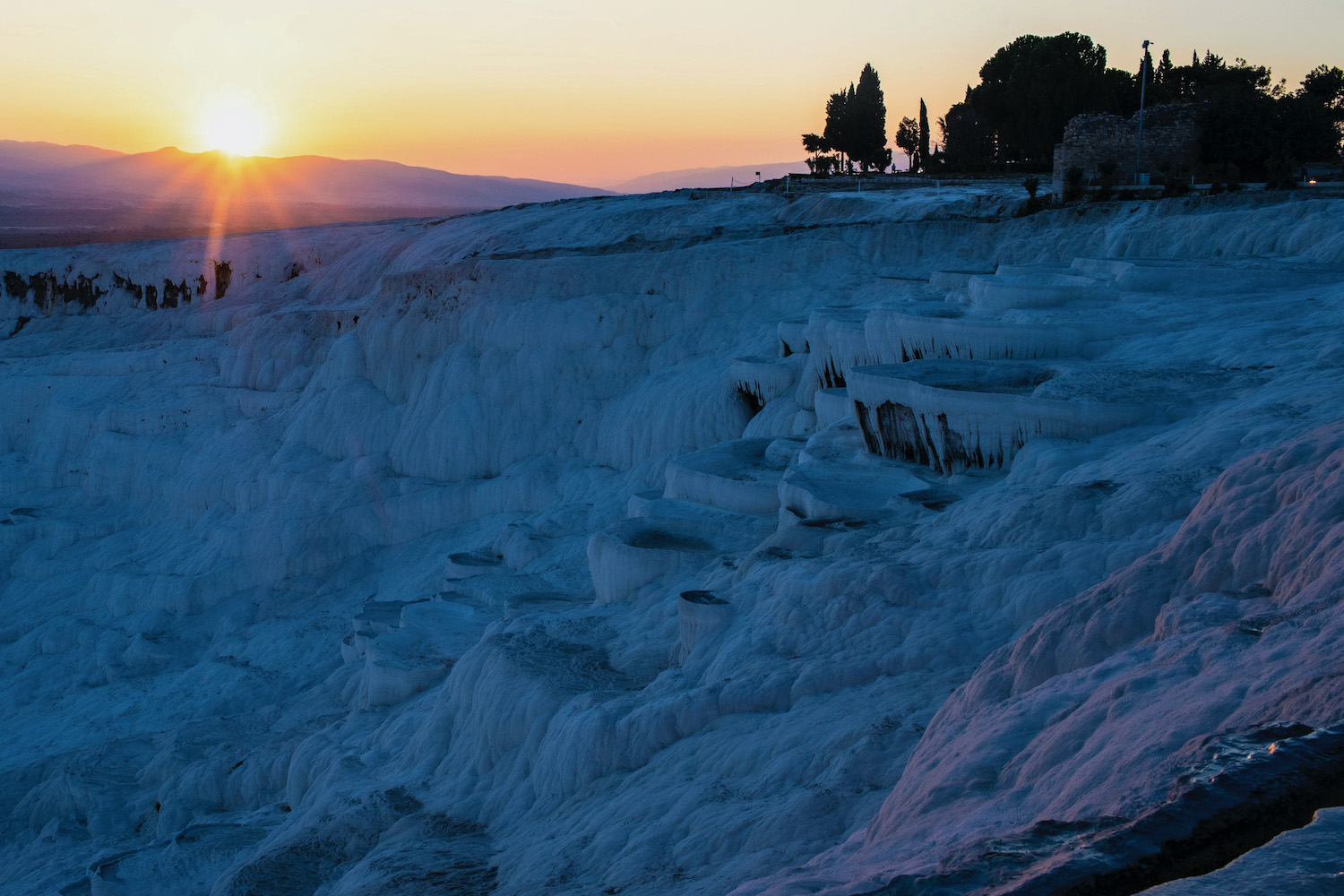 Other FAQ About Visiting Pamukkale

Can you swim in Pamukkale?

You can swim in several of its travertines, but not all of them.  You can swim in any of about half a dozen large pools on the way up to the top, where the site’s most Instagram-worthy pools (which are closed to swimming—don’t try to enter them) are.

Why is Pamukkale white?

I characterized it as a “chalk mountain” earlier in this post, and that wasn’t just because of the way it felt beneath my feet. Pamukkale’s white color derives from calcium carbonate, the same chemical found in chalk.

What is the best time to visit Pamukkale?

My favorite time to visit is in October, when the crowds of summer are (mostly) gone, but when its warmth remains. October is also a sunny month; summer here can be wet. Snow can fall here in winter!

Is Pamukkale worth visiting? Absolutely! Assuming, anyway, that you can adequately downplay any expectations you might have of the town itself, and make peace with the fact that Ephesus isn’t really day-trip distance away. There’s no landscape on the planet like the travertines of Pamukkale—and I say that as someone who’s been around the world enough to make such a claim. While this magical place has yet to be recognized as the “Eighth Wonder of the World” outside of Turkish tourism marketing materials, I certainly think it deserves that honor.

Robert Schrader is a travel writer and photographer who's been roaming the world independently since 2005, writing for publications such as "CNNGo" and "Shanghaiist" along the way. His blog, Leave Your Daily Hell, provides a mix of travel advice, destination guides and personal essays covering the more esoteric aspects of life as a traveler.
Read More Share
Your Ultimate Nature & Culture Guide to Yosemite
Turkey’s Fethiye or Ölüdeniz?