Perhaps it’s the spirit of Thyagaraja Swami that “looks East” now after having set exotic regions of the world awash in Carnatica. 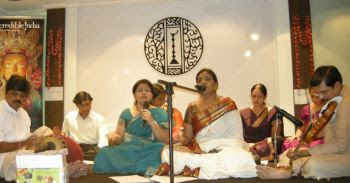 Celebrating a rich heritage:Pantula Rama (centre), violinist Mutnuri Srinivasa Narasimha Murty and Vankayala Venkata Ramana Murty (extreme left).
The new year for India in ‘Suvarnabhumi’, as the Thais call their green and pleasant land, began on an auspicious note with the first-ever Thyagaraja Aradhana in Thailand. As any observer of or participant in the Carnatic world knows, the 20 {+t} {+h} century tradition of the Thyagaraja Aradhana at Thiruvaiyaru in Tamil Nadu on ‘Bahula Panchami’, celebrating the 18 {+t} {+h} century saint-composer’s memory through his music, is an event like no other. Moreover, it has become the expression of the Carnatic community’s cultural confidence in a new country and a celebration of its rich musical heritage wherever the Carnatic diaspora settles, even — especially? — in otherwise remote places on the planet like Cleveland in the US. Not surprisingly therefore, a Thyagaraja Aradhana was organised in Bangkok by the Telugu Association of Thailand (TAT), to celebrate its first anniversary.
The artistes they invited for this jubilee, from Visakhapatnam, were vocalist-violinist Pantula Rama, her violinist husband Mutnuri Srinivasa Narasimha Murty and mridangam vidwan Vankayala Venkata Ramana Murty. All three artistes enjoy good standing in the Carnatic world: most recently, they performed on December 17, 2009 at the Madras Music Academy in its eight-decade-old annual music festival.
The two-day Bangkok Thyagaraja Aradhana began with a regular Carnatic concert by Srinivasa Murthy and Pantula Rama at the Indo-Thai Chamber of Commerce in midtown-Bangkok on a Saturday evening in January with aspects both piquant and poignant. For one, an important sponsor of the one lakh- bahtevent (about Rs. 1.35 lakhs) was a Chinese lady, while the free hotel accommodation for the artistes was courtesy a Pakistani Hindu settled in Kuwait.
Celebration of diversity
Embodying the wonder that is India, a young Sikh, Mr. Baljeet Singh, formerly of Palasa near Srikakulam, AP, welcomed the audience in chaste Telugu. Like his Sikhniwife Reena of Guntur, AP, Mr. Singh speaks, reads and writes fluent Telugu. (Habitués of the Madras Music Academy will instantly recall Mr. Yadavindra Singh, a front row regular at the Academy’s festivals, whose family lived in Andhra Pradesh for five generations and who flies down every year from the US to get his ‘Margazhi monthful’ of paatu).
In that very spirit, the musical range of the evening was pleasantly pan-Deccan, with requests pouring in for songs in Kannada, Malayalam and Tamil from the enchanted audience, which made full use of the opportunity to appease its emotional hunger for live Carnatic music.
Celebrating a rich heritage:Pantula Rama (centre), violinist Mutnuri Srinivasa Narasimha Murty and Vankayala Venkata Ramana Murty (extreme left). 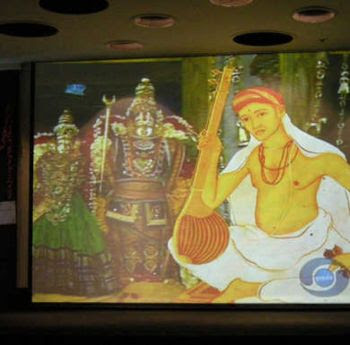 Despite the lateness of the first evening, the artistes and a respectable slice of the audience were present early the next morning at the new Indian Cultural Centre on Sukhumvit Soi 23 (the same street as the Embassy of India in Bangkok, a location akin to Radhakrishnan Salai in Chennai or Connaught Place in New Delhi). Soon, the intense ‘ bhakti hush’ produced by genuine Indian classical music pervaded the hall as the singer, flanked by as many others as the Centre’s tiny stage could comfortably hold, launched in her deep, steady voice on the five grand devotional compositions in Sanskrit-Telugu by Thyagaraja Swami collectively celebrated as the ‘ Pancharatna Kriti’ or Five Jewels.
Serendipitiously, it was the first concert of 2010 at the Indian Cultural Centre, Bangkok, an outpost of the Indian Council for Cultural Relations (Ministry of External Affairs), inaugurated as recently as on September 22, 2009, by its President, Dr. Karan Singh and the Thai Minister for Culture, His Excellency Mr. Teera Salukpetch. The singing was preceded by the screening of a 10-minute clip of the Doordarshan DVD of the original Thayagaraja Aradhana, so as to vivify the original context to the Bangkok audience.
Fittingly, the Bangkok Thyagaraja Aradhana was covered by both a Thai TV channel, TAN-TV (Thai News Network) and a Telugu channel (TV 9) whose presenter was none but the adventurous Hyderabad-based Subbu Peteti Venkata of KtoKfame (the televised journey he made a year ago, minus any money, from Kanyakumari to Kashmir). Said ‘ Subbu’ disarmingly, “My knowledge is very limited about Thyagaraja Aradhanas, but I thoroughly enjoy the very thought of everyone here trying to promote Indian culture and heritage in Thailand,” and posted a clip on YouTube soon after.
Of the Thai students from Silpakorn (Arts) University present, Banuwongse, a second-year MA student in Sanskrit said it was very interesting for him to hear “sung Sanskrit”, while his teacher, Dr. Prativa Manjari Rath of Kalinga University, currently on an ICCR teaching assignment at Silpakorn, said, “This is spiritual music. I did not need to understand Telugu to feel moved by its devotional quality.” Said Kittipong, leader of the Thai-Hindi Club of Bangkok: “Some of us relate very deeply to India. There are teachers and students at Mahidol and Silpakorn Universities who have been to South India.” They agreed that hearing Indian classical music live was a very different experience from hearing recordings.
“Well, that’s why we decided to invite the artistes,” says Madhavi Vemuri and Aparna Row, the core organisers, who, in the fitness of things, asked Row’s guru, Pantula Rama to star in the show. “I never expected it would be such a big event,” said Pantula Rama.
Show of solidarity
After the concert, as the women of the Telugu Association of Thailand served free vadai and coconut chutney to all A.S.N. Shastry, 54, the President of TAT, smiled with satisfaction. What began as a picnic by 12 Andhra families in Bangkok’s Lumpini Park a year ago had grown to a 100-strong gathering by Ugadi (Telugu New Year) last April. By January 2010, there were a 140 members and ready to plant their flag. Typically of the singing, dancing nation that is India, they chose to do so with their music.
“I’ve been in Thailand 25 years,” says Shastry, who works as the factory manager in a large Chinese textile firm and says he was nominated by the Telugu Association as its President by virtue of his long residence in Thailand. “Somehow it all fell into place this year AND we have some money left over for next year’s Aradhana.”
Perhaps it’s the spirit of Thyagaraja Swami, who was not known to let the murukkucrumble, that “looks East” now after having set exotic regions of the world like the American Midwest awash in Carnatica.
Renuka Narayanan is presently the Director of the Indian Cultural Centre, Bangkok. Mail her at [email protected]
Courtesy: The Hindu

Kiran Vaka has a multi-cultural background, and has lived in India and America. His childhood was spent in the cities of Delhi and Bangalore, both of which differ culturally and linguistically. He came to America as a student, and lived on Long Island, NY before moving to Silicon Valley, CA.

Kiran speaks four languages - Telugu, English, Hindi and Japanese. He believes that his experiences have made him capable of being able to easily adapt to any place in the world. He also has a background in Computer Science, where he works on software development and project management, specializing in Customer Relationship Management (CRM) software. He was also the recipient of the DMI Innovator Award from Carnegie Mellon Silicon Valley and NASA Ames in March 2010.
Read More Share
March of the Innocents
Sunshine is great