I get emails from many readers asking about the question of Thailand vs Vietnam. They’d like to visit both countries, they say, but at the moment only have time for one.

If, as you plan your trip to Southeast Asia, you find yourself with a similar quandary, this post is for you. (Which is not to say you can’t email me and ask more questions—you’re obviously still welcome to do that.) The vast majority travelers, however, will be able to choose between Vietnam or Thailand after reading the next few paragraphs. You’re about to be one step closer to Southeast Asia!

Why Compare Thailand vs Vietnam?

When you’re narrowing down your list where to go in Southeast Asia, two countries—bet you can guess which ones!—come up much more than all the others combined. This makes sense, when you consider some basic facts, first among them that Thai and Vietnamese are some of the most popular cuisines in the world, let alone from this region. Add to this hot cities like Bangkok and Saigon, islands such as Phuket and Phu Quoc and heritage sites like Ayutthaya and Ha Long Bay and…well you get the idea.

As far as why Vietnam vs Thailand often merit comparison, there are two main reason. Some travelers simply don’t have enough time to visit both—fair enough. Others assume there will be too much overlap or even redundancy if they visit both Thailand and Vietnam. While I don’t necessarily agree with this (if only because, culturally, Thailand has more in common with India while Vietnam is closer to China), I can see where certain travelers might get that idea.

Breaking Down the Thailand vs Vietnam Debate

Places to Visit in Thailand and Vietnam

To be sure, there is some overlap between the 10 best places in Vietnam and a similar list in Thailand—the islands of Phang Nga Bay near Phuket are not entirely dissimilar from those in Halong Bay near Hanoi; Bangkok and Saigon have similar vibes in certain districts. On the other hand, while both Hue’s Imperial Citadel and the Sukhothai Historical Park are incredible ancient structures, neither their architectural styles not the circumstances of their construction bear much resemblance to one another.

I would generally say you can afford to spend less time in Thailand than Vietnam. While 10 days in Vietnam will see you stretched—and probably having to cut out the entire middle of the country, near Da Nang City—10 days in Thailand affords you 2-3 days in Bangkok plus 3-4 days each in “The North” (i.e. Chiang Mai and maybe Chiang Rai) and “The Islands” (Phuket, Krabi, Koh Samui or, perhaps, the Trang or Trat archipelagoes).

Thailand vs Vietnam: Which is Safer?

This aspect of Thailand of vs Vietnam is most frustrating, in my opinion—neither country is particularly safe on the whole, even though you can get the illusion of security in fancy big city hotels and shopping malls. I’ve seen grisly traffic accidents along both Thai and Vietnamese highways; although I’ve found the packs of wild dogs to be more aggressive than those in Vietnam, other dangers (namely, more conspicuously decaying infrastructure and facilities) lurk.

This is another hard one, though for much more pleasant reasons that the last section. It’s very hard to me to decide between eating the best Vietnamese dishes (from super-popular pho to more regional specialties like ban xeo pancakes and com tam “broken” rice) or Thai classics like som tam papaya salad, gaeng kiaw waan gai (green curry with chicken) and the Kingdom’s take on pan-Asian Hainanese chicken rice. Whether I’m in Thailand or Vietnam, I always want to eat all the food!

Is Thailand or Vietnam More Expensive? 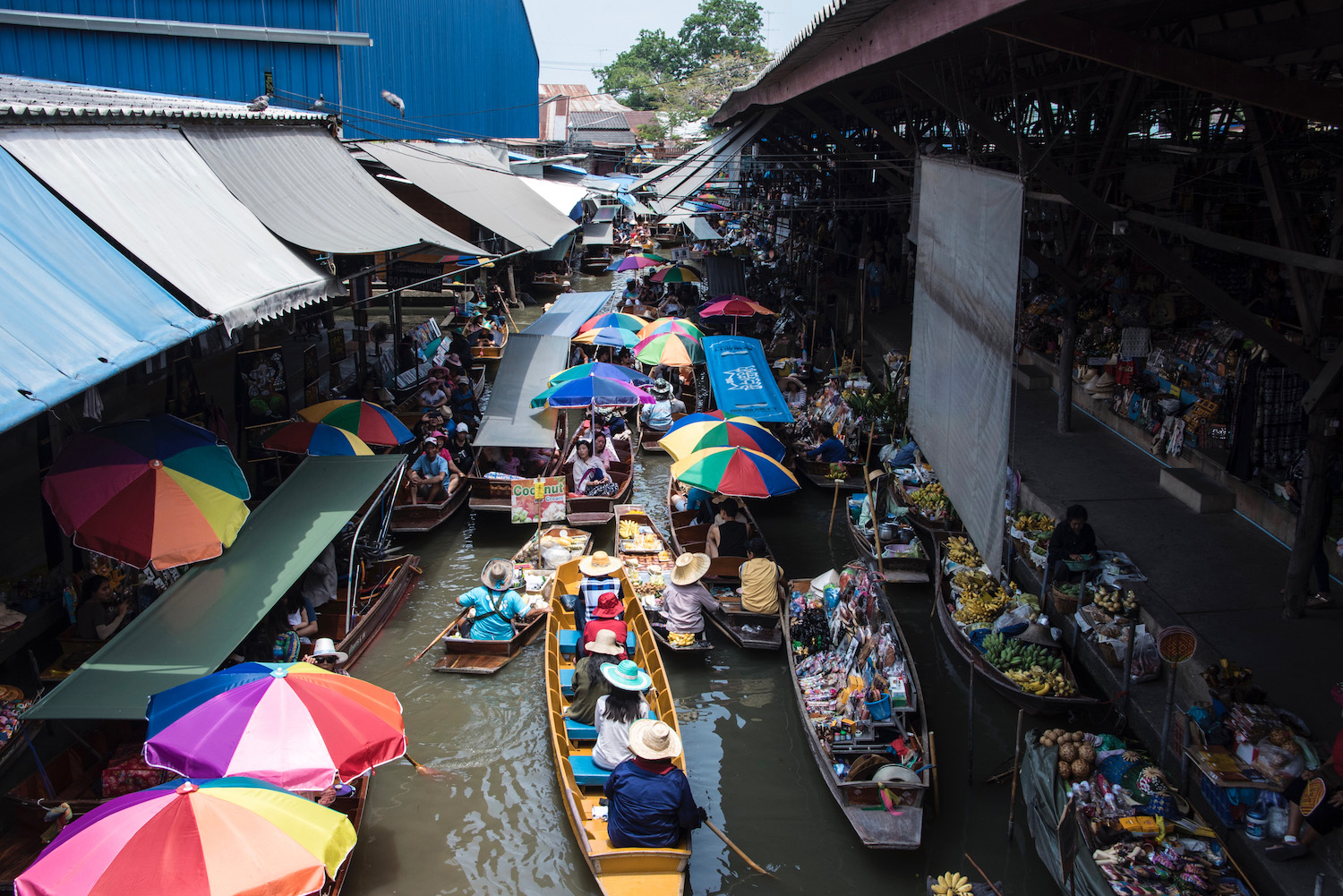 Is Thailand inexpensive? Yes, but not as much as it used to be—and not anywhere near as inexpensive as Vietnam. In the decade I’ve been traveling to both countries, I’d say the cost of traveling in Thailand has gone up at least 50%. It’s now difficult for me to imagine surviving a day in the Kingdom on less than 50 USD. On the other hand, it’s very conceivable that you could slum your way through Vietnam on less than 20 USD per (as I did during my first trip there, back in 2010!).

Thailand vs Vietnam vs Other Countries

For travelers who have a relatively flexible amount of time in Southeast Asia, a route like Thailand to Cambodia to Vietnam (with Laos somewhere in the middle, or Myanmar on the other end) is a very popular choice. Comparing Thailand and Vietnam with other Southeast Asian countries forces you to take more factors into consideration, but I wouldn’t actually say it’s significantly more complication.

Setting aside the direct Thailand vs Vietnam question for a moment, you can compare Southeast Asian countries as follows. Thais and Burmese both adhere to Therevada Buddhism, while Laotians have a similar language and lifestyle to Thailand’s Isaan people. Malaysia and Indonesia are both Muslim but have Chinese-minority populations; these proportions are flipped in tiny Singapore. Vietnam, meanwhile, bears more similarities with its northern neighbor China than with Cambodia to the southwest.

How Long Should You Spend in Southeast Asia?

Whether you choose to visit Thailand or Vietnam (or both), and regardless of how long you end up spending in either, the larger question becomes how long you spend in Southeast Asia.

On the other hand, if your Southeast Asia itinerary will include just one of Thailand and Vietnam (plus maybe a few days each in Cambodia and/or Laos, and brief stops in Myanmar, Singapore, Indonesia and Malaysia) it is conceivable that you could spend just a month in Southeast Asia. With this being said, if you’re flying in from far overseas, I’m not sure it’s humane to travel in this region for a shorter length of time.

This post will help you resolve the Thailand vs Vietnam debate for yourself, at least in the short term. In the long term, however, you will almost certainly visit both of these magnificent countries, whether to slurp pho on the streets of Saigon, or traipse amid ancient temples within the old city walls of Chiang Mai. Some of you, in fact, will probably end up finding a way to visit both Thailand and Vietnam on your upcoming trip, even though you initially thought it impossible.

Robert Schrader is a travel writer and photographer who's been roaming the world independently since 2005, writing for publications such as "CNNGo" and "Shanghaiist" along the way. His blog, Leave Your Daily Hell, provides a mix of travel advice, destination guides and personal essays covering the more esoteric aspects of life as a traveler.
Read More Share
Taiwan Tourism at Travel & Adventure Show in Chicago
A Return to Cultural Philippines