On a cool winter morning, as one walks down the road to the Sewri jetty in Mumbai, it seems more like taking a guard of honour from the oversized trucks that line both sides of the road. Pass them, and the road opens up.

Towards the left, a smattering of old ship wrecks marks the foreground. And beyond them, a rising Sun glints upon the Arabian Sea, trying to figure its way between the clouds and the smoke that mark the usual Mumbai sky. But there’s so much here that’s unlike the usual Mumbai. Flamingos for example.

It’s the east coast (yes, Mumbai has one!), and in a city known for its evening Chaupati sunsets, we are here to witness a sunrise and so, even the Sun is atypically benign.  But more than that, we are here for a glimpse of nature in the otherwise industrial area of Sewri. 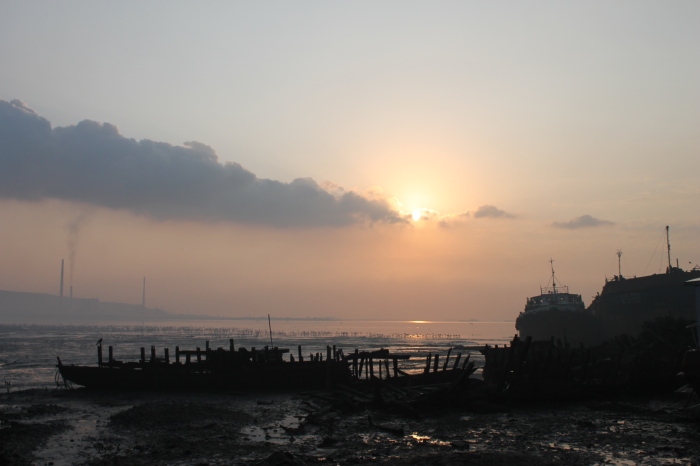 A Sunrise through the wrecks

A keener look at the sight reveals those thousands of birds that we’ve come looking after. They stand, in row after row, at the edge of what’s called the Sewri mudflats – wetlands formed by mud deposited after tides. Eyes marvel at the congregation of the white birds as we walk past rows of worn out and junk ships, or rather, large boats. Once at the jetty, the Flamingos are closer, their white bodies contrasting with the grey landscape and the nuanced pink flavours of their wings gelling with the reddish hues of an early morning. It’s like a sea of several curved dark beaks & long necks craning down to find fodder in another sea.

Every now and then, one of them flaps its wings, to reveal a plumage of white, pink and black, all woven together by the careful & yet seemingly effortless precision that only an artist, or the nature itself, can afford. They come in huge numbers, an entire colony of tens of thousands that lines the swamps. The question really though, how did they land up here & why? 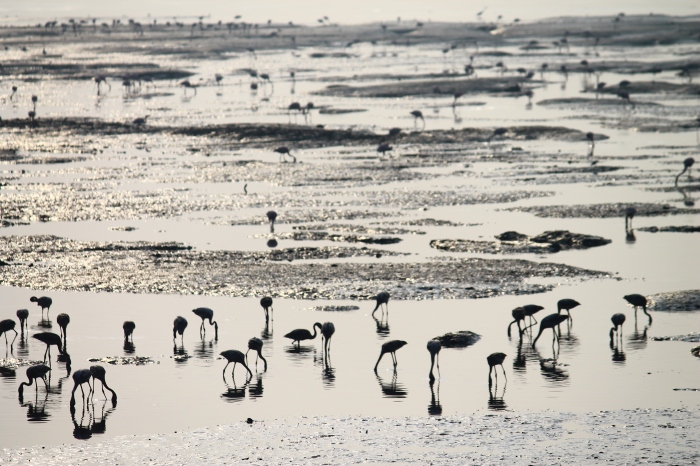 A colony of flamingos against the Sun

So here’s the thing. Every year, Mumbai witnesses a migration of Flamingos, mostly lesser Flamingos (more populous with darker bills and white-pink plumage) and a few greater flamingos (less populous, plumage is pink-red). Though one can’t be sure, it’s being said that these migrate from the Rann of Kutch in Gujarat, already known for its Flamingo sightings.

They usually look for swampy habitats & mangroves, which are easily provided for in areas such as Sewri and Thane creek. From the start of the winters till May, these are the abodes of thousands of these birds and several other species. Egrets, Sandpipers, Ibis are some of the other species of birds that can be easily spotted here.

A black headed Ibis and an Egret look for food

Living in the constant grind of a city such as Mumbai, it is sometimes difficult to grasp that such natural beauty may be lying in your backyard.  Sometimes, one just needs to look around.

Take a moment to catch one of these birds in flight and ponder at the amazing story of migration that Mumbai is, of birds that flocked from all other parts of the country, to find food & shelter here; of the swamps & marshes, of mud & concrete alike, that provided them all of this; the mud-flats that in a way, represent the richness & also the shallowness of our city lives that all drain into the urban sea called Mumbai. Look at them, an Ibis here, an Egret there, at one moment flocking together, at the other competing for a piece of the same food.

Aren’t you and I, birds here too?