Tuk tuks, covered carts attached to a motorcycle, are a major and relatively inexpensive form of transportation in Cambodia. Variations of the tuk tuk can be found throughout most of southeast Asia and are equally popular. Finding ourselves with an unplanned day in Phnom Penh, our guide suggested an excursion to Mekong Island (Koh Dach) for some touring off the beaten path. Always up for an adventure, we eagerly put ourselves in the capable hands of Sam, our guide.

Our day began with a short cruise up the Mekong River (a childhood favorite of mine), passing river huts and “marinas” in the shadow of Phnom Penh’s booming tourist hotels.

While we disembarked, Sam swiftly negotiated a half-day tuk tuk excursion, and in the three of us climbed. Koh Dach is one of several islands in the Mekong just north of Phnom Penh where silk production was once a major cottage industry. However, we experienced quite a bit of island life that day, way beyond our 1 hour visit to a silk “farm.”

A tuk tuk driver rests in his hammock at siesta time, chatting with another driver.

First stop was a new temple complex. But what caught my eye was the house next to the temple. Most Cambodian abodes look similar to this:

Most Cambodian village houses are simple structures on stilts. The raised abode has a dual purpose of keeping varmints out (think snakes & rats) as well as providing a shady place for livestock.

The house that caught my attention was this one: 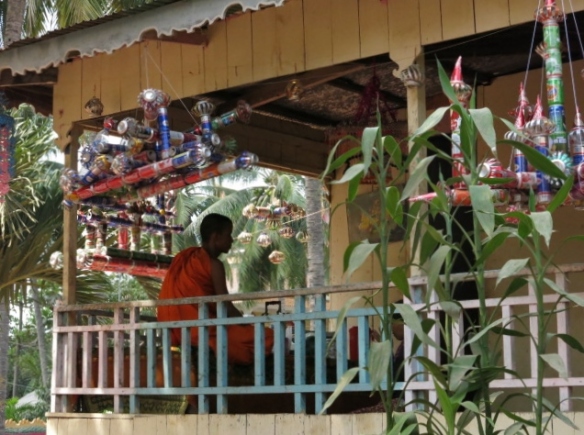 A monk sits in meditation surrounded by clever mobiles of…used cans and bottles. Repurposing as an at form — how clever!

I’d seen similar but smaller and less complex recycled art at home, but nothing quite as elaborate as these pieces.

Continuing on, our next stop was even more amazing. Sam, always on the look out for the unusual, called out “Stop!” to the tuk tuk driver and ordered him to turn back around.

Female cow, on the right, is unenthusiastically awaiting her bull, the large humped bovine behind her. Assumedly, the third animal is her calf, but whether there just to help keep Mama calm or for instructional purposes wasn’t clear.

A gaggle of villagers, all men, were trying to “encourage” a bull to do his natural mission of impregnating the cow in front of him. She, being kept in place in a form of “stocks” by a nose ring and tether  was having none of it. She lowed and shook her head, the calf lowed and strained at his rope, and the bull — well, he looked completely and utterly clueless. After over five minutes of standing poised with camera in my face, I lowered the camera to give my arms a break and — FLASH!! — you guessed it — the bull had mounted and dismounted the cow in less time than it’s taken me to describe their mating. All of 3 seconds. Flat. I think some old fashioned “wham, bam, thank you, ma’am” encounters have lasted far longer.

Afterwards, the bull looked a little less clueless and perhaps just a bit smug. The cow, on the other hand, was still lowing miserably.

Continuing on our way, we passed through a few hamlets, with the road gradually deteriorating from paved-with-potholes to a dirt road — a very dusty dirt road. Sam once more hollered for the driver to stop when he spied an on-going Buddhist wedding in one village. He urged us to join the party, saying the couple would be very pleased and honored to have Americans join them. I demurred as I thought our uninvited presence would be intrusive and distract from the ceremony. Besides, I didn’t really feel comfortable being a “wedding crasher.”  On we went.

The next stop — a silk farm — was fascinating as their production was truly from soup to nuts — or worms to silk products. (Skip this first  picture if squeamish.) 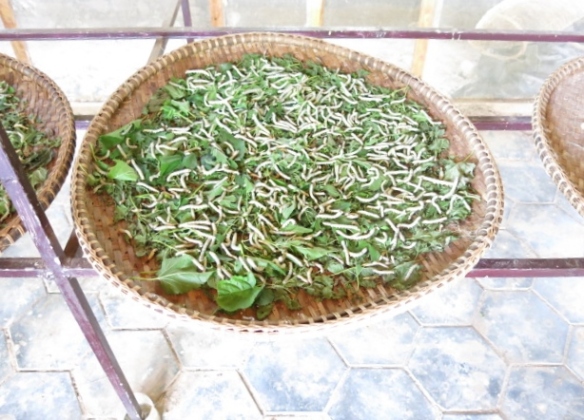 Silk worms — caterpillars — feeding on a basket of mulberry leaves.

The silkworms are placed in  bunches of hanging branches where they spin their cocoons. Once the moths have emerged, the cocoons are collected for extraction of the raw silk fibers.

Dyed silk thread against a nest of cocoon fibers or raw silk.

Raw silk fibers after being unwound from the cocoon. 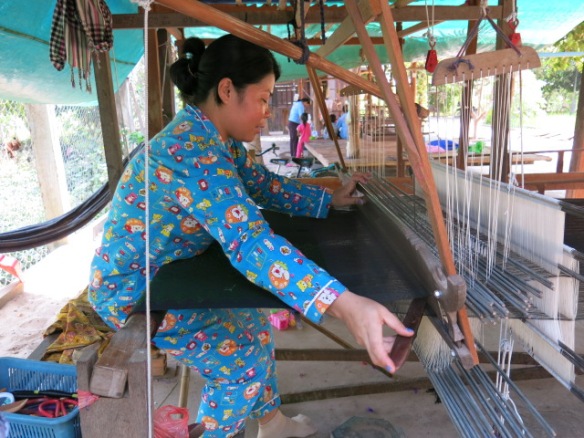 After the silk fibers are cleaned and dyed, they are woven into cloth for various types of silk garments.

Michael trying his hand at weaving.

Some of the finished product: colorful silk scarves.

Always a cottage industry, the techniques for silk production, especially weaving, have been passed down from mother to daughter over the centuries. However, silk production, once a mainstay of Cambodian life and local economy, has faltered in recent years. The reasons are multiple and interactive: overuse of pesticides in farming have killed off huge numbers of moths and silk worms; these same agriculture practices have made small-hold farming more lucrative, drawing off silk weavers and others to support family farms; many silk workers have left for more lucrative pay in factories as Western markets have increasingly shifted production to the lower wage Asian markets. This siphoning off of skilled or potential weavers has, in turn, exacerbated declining silk production. Initially, dying off of the silk worm population resulted in importing cheaper and more available raw silk from other Asian countries. However, in recent years, the cost of these imports rose while simultaneously the cost of the finished silk goods declined.

Cambodia has struggled mightily to correct decades of both layered, institutional corruption as well as the murderous, decimating rule of the Khmer Rouge in the 1970’s and other repressive government since. Recently taxes on raw silk imports have been lowered, and some subsidies instituted for silk production, but model silk “farms” such as the one we visited have not been able to offset the steady decline of this craft. The allure of higher paying manufacturing jobs, as well as the more productive family farm, have siphoned off much of the next generation of silk growers and weavers. It remains to be seen whether silk production and weaving in Cambodia will survive the 21st century.

By the time we left the silk farm, we were getting used to Sam’s exhortations for the driver to stop immediately and perform a whiplash-inducing U-turn in the road to go back to whatever Sam had just spotted. This also meant that as we turned 180 degrees, we immediately were covered by a cloud of dust churned up by our tuk tuk just moments before. But it was always worth it.

One such road reversal took us back to a tiny one room house where an enterprising young couple sold home-brewed palm wine. People — mostly men — would enter the hut with doubled or tripled plastic bags and emerge with a bulging sack of palm wine. The couple welcomed us into their abode, and offered us a sample of their brew. Trying not to think of how many people had imbibed from the same cup, I told myself a little bacteria can only make my immune system stronger. I sipped, Michael guzzled. We declined to buy; I really wasn’t keen on palm wine, I discovered. 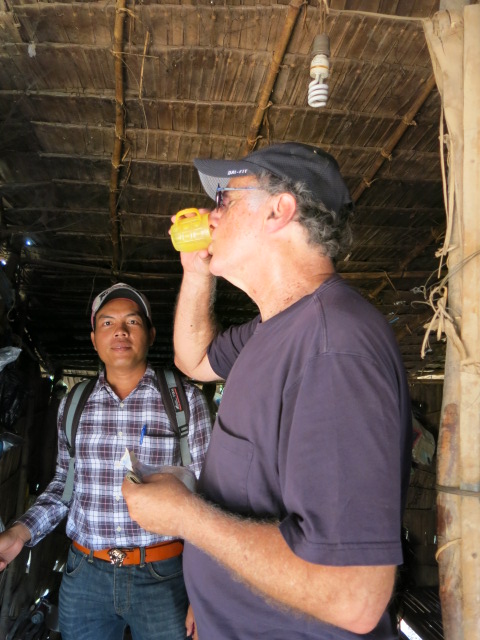 Michael samples the palm wine. Sam looks at me saying, “Your turn!” I had to do it….

The lady of the house — who was drop dead gorgeous — could not have been more than 18 but already had several children under foot. Michael immediately fell in love. I think his ardor cooled somewhat when he sniffed out the other home brew she had going: teuk trei, or fish sauce. Very pungent, stomach-churning, fermented fish sauce. We declined this purchase as well. 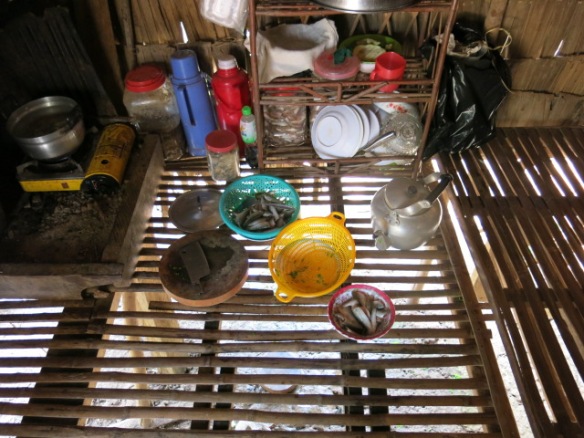 The hut was no more than 12 by 6 feet for a family of (what looked like) five. One corner was the cooking area. The upper left corner above shows the concrete pan fire place where the palm wine (and fermented fish sauce) were cooked. Two of the bowls contain small river fish waiting to be added to the pot.

We had a few more neck-wrenching U-turns, all of them interesting. We came upon a second wedding, and Sam almost persuaded us to join the matrimonial fun. Images of The Wedding Crashers kept kalaidoscoping in my head so we chickened out. But the last stop was the best of all.

“Stop!” hollered Sam, followed by a torrent of Cambodian, he was so excited. “Cow! Giving birth! Come!” he finally managed. So we scrambled out of the tuk tuk and ran to where a half-dozen men were playing midwives to a cow. By the time I was able to get my camera focused, the calf was halfway out. We watched through the entire process: 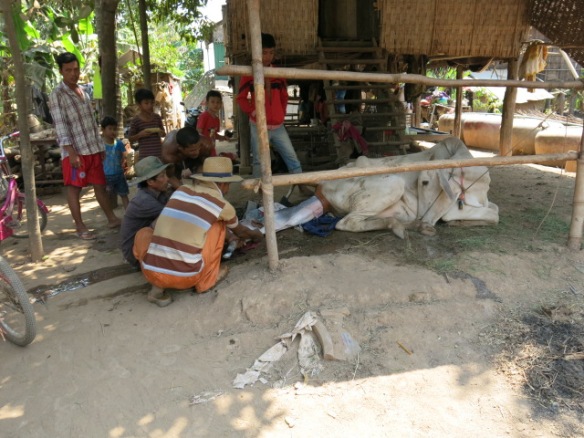 Two men gently help pull the calf from the cow, who looks on impassively.

At this point, the calf was not yet breathing and the umbilical cord is still attached. 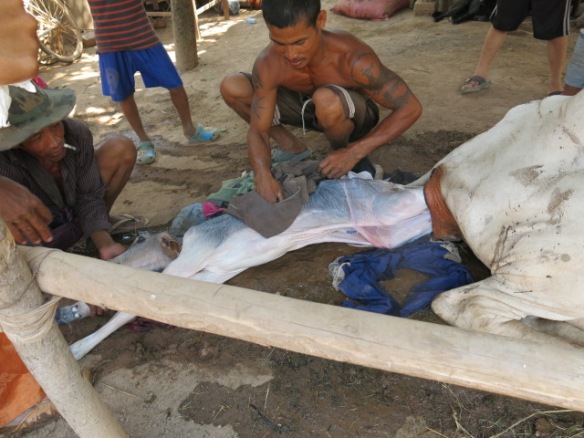 One man gently wipes mucous and placenta from the calf’s body. 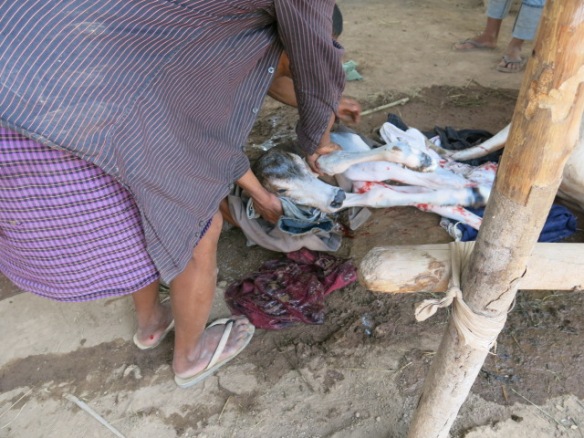 The calf’s face and nostrils were carefully cleared and it began to breathe on its own.

The calf was placed before the mother who proceeded to first smell and bond with the calf, then lick it clean.

So that was our day: breeding cows, re-purposed porch art, un-crashed-weddings, attempts to weave silk, palm wine sampling, and witnessing a calf’s birth. Certainly an off-road day, and one to always be remembered.

Carol Barbier Rolnick grew up in Japan and Southeast Asia, traveling extensively as a child through Asia, the Mideast and Europe on family vacations. Travel has continued as a priority through raising kids and continuing into retirement, extending adventures through the Americas, southern Africa, Asia, and repeat trips throughout Europe. Carol and her husband, Michael spent four summers based in Utrecht, The Netherlands, which has become like a second home. They are (still) aiming towards Australia-New Zealand and Antarctica to round off their continental travels.
Read More Share
5 Things To Do In Goa India, Off the Beach
Cloud Forests Meets Coffee on a Costa Rican Journey